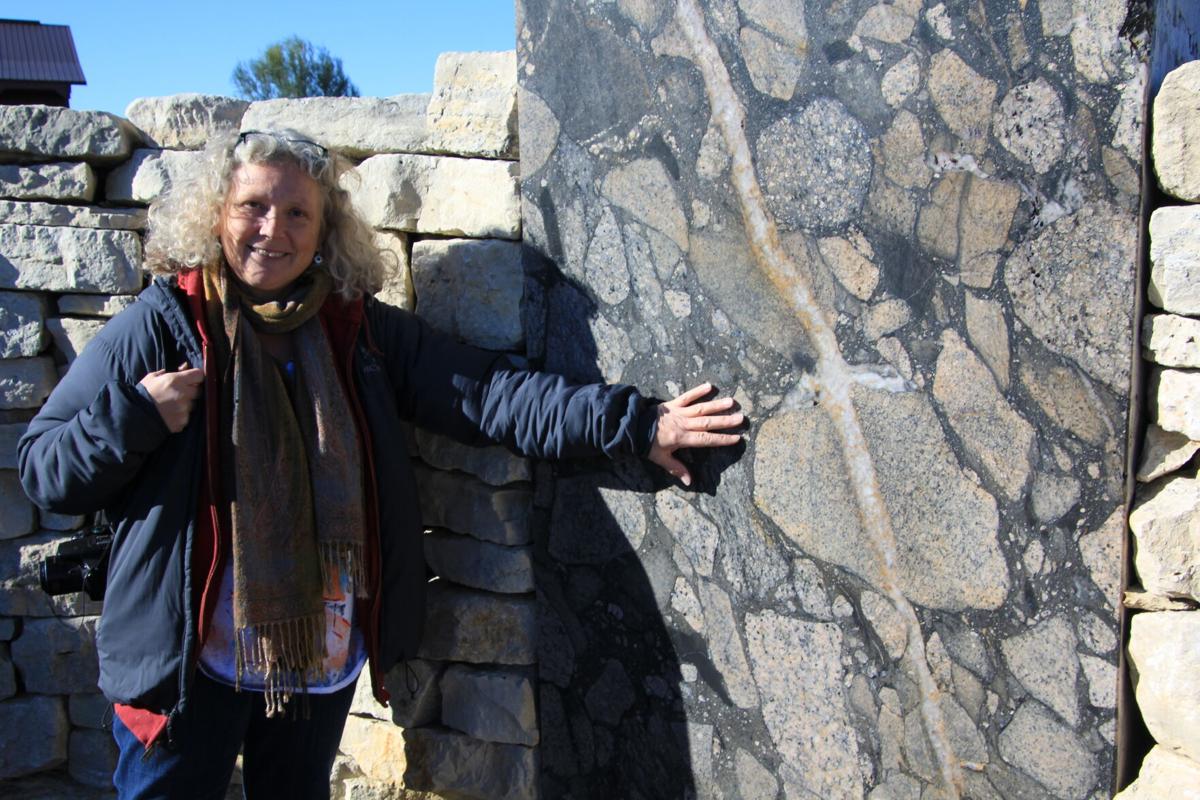 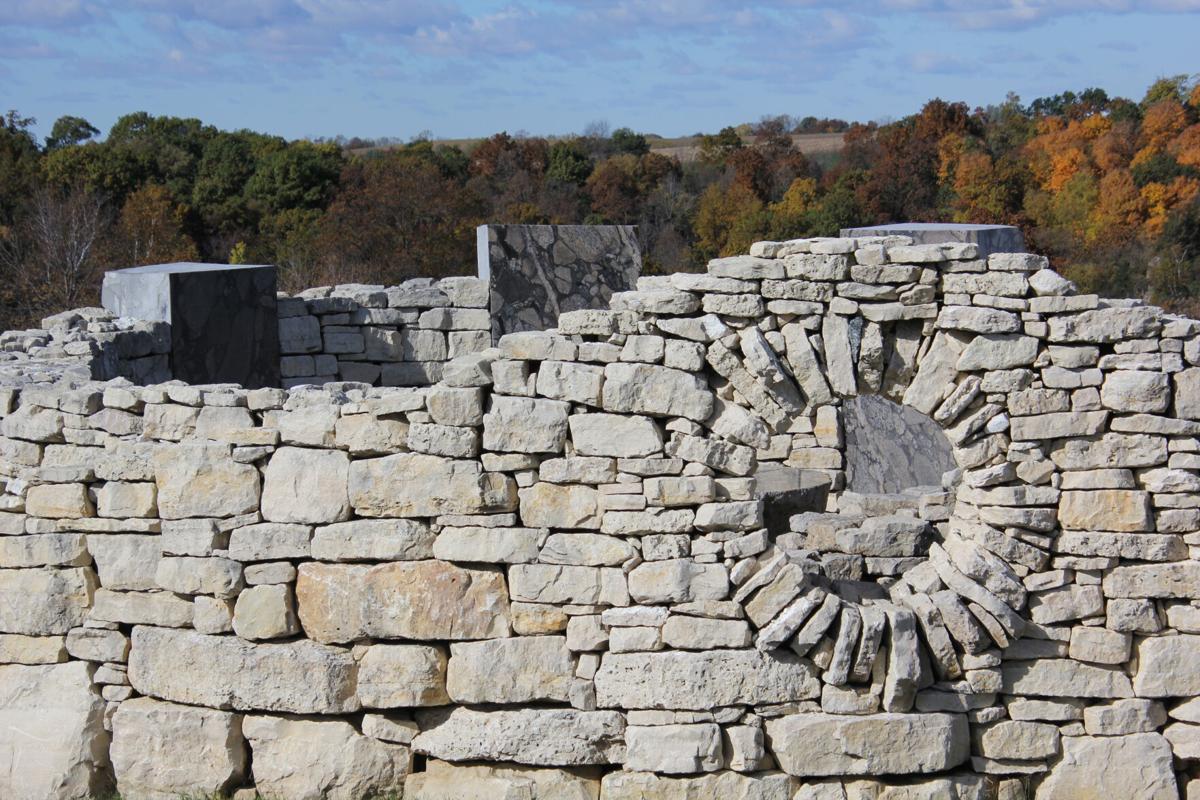 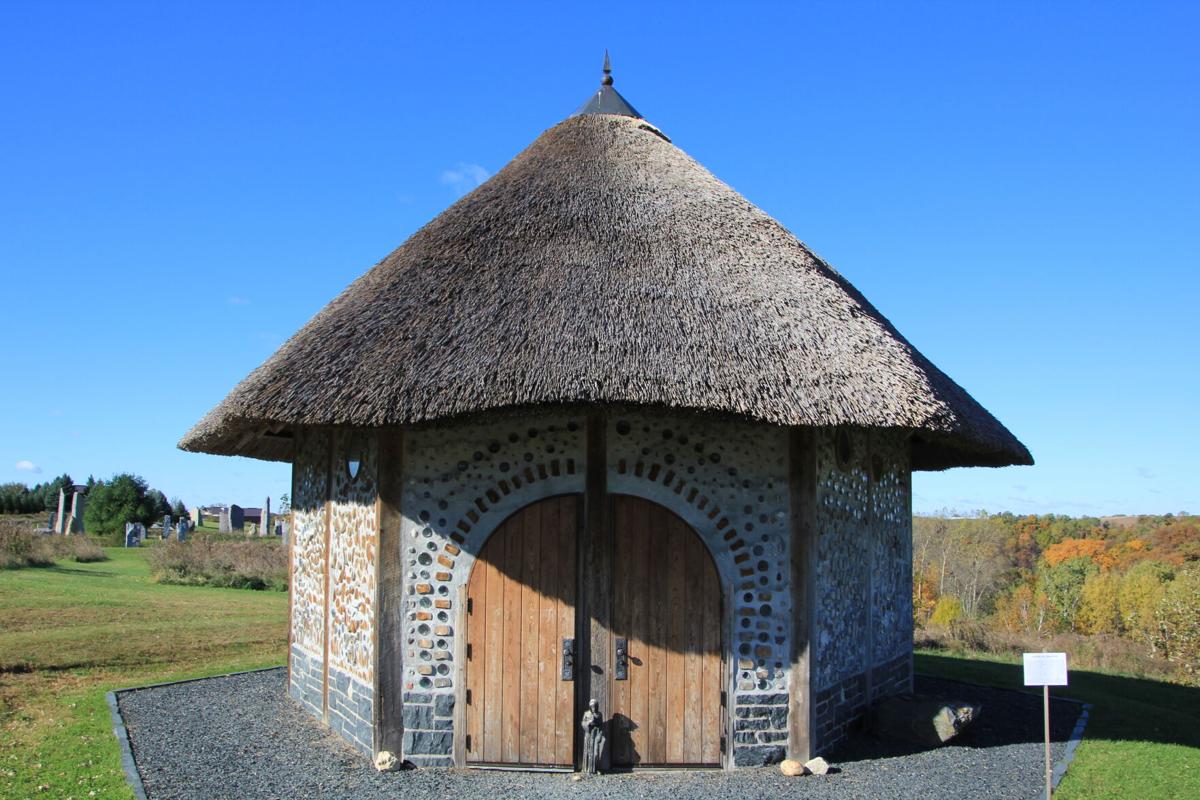 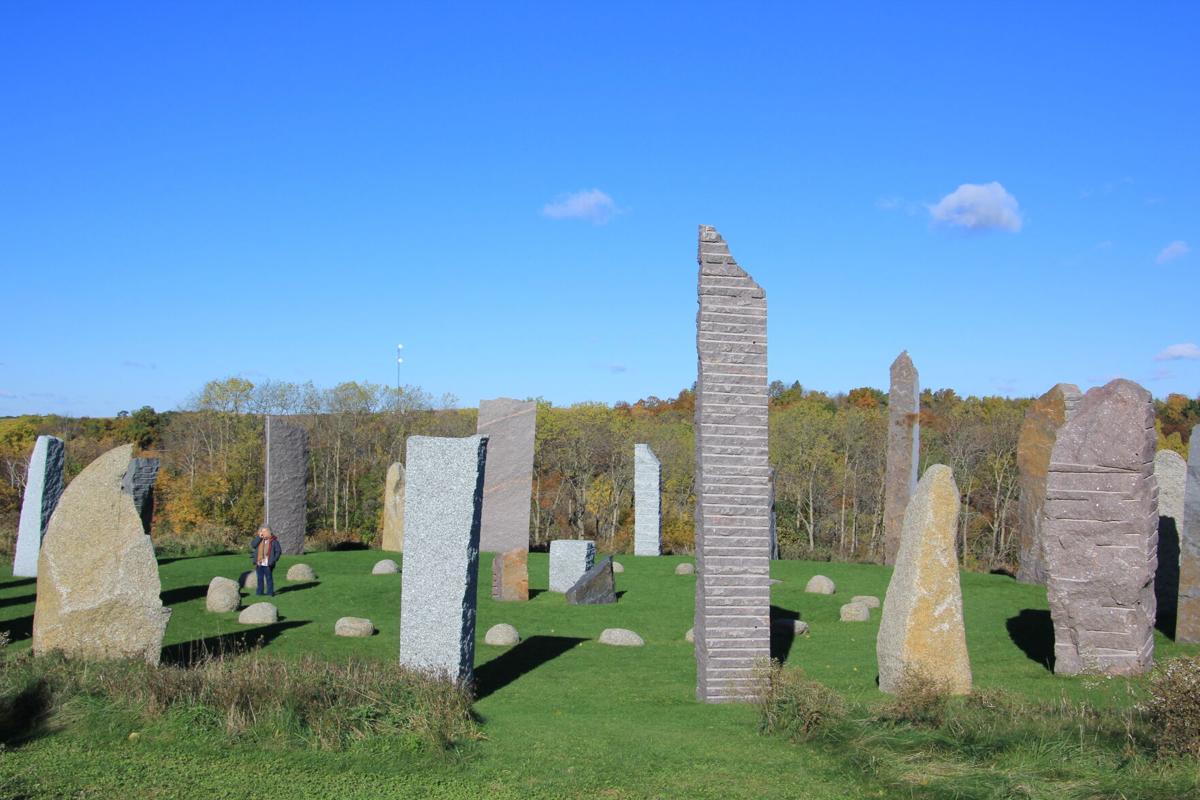 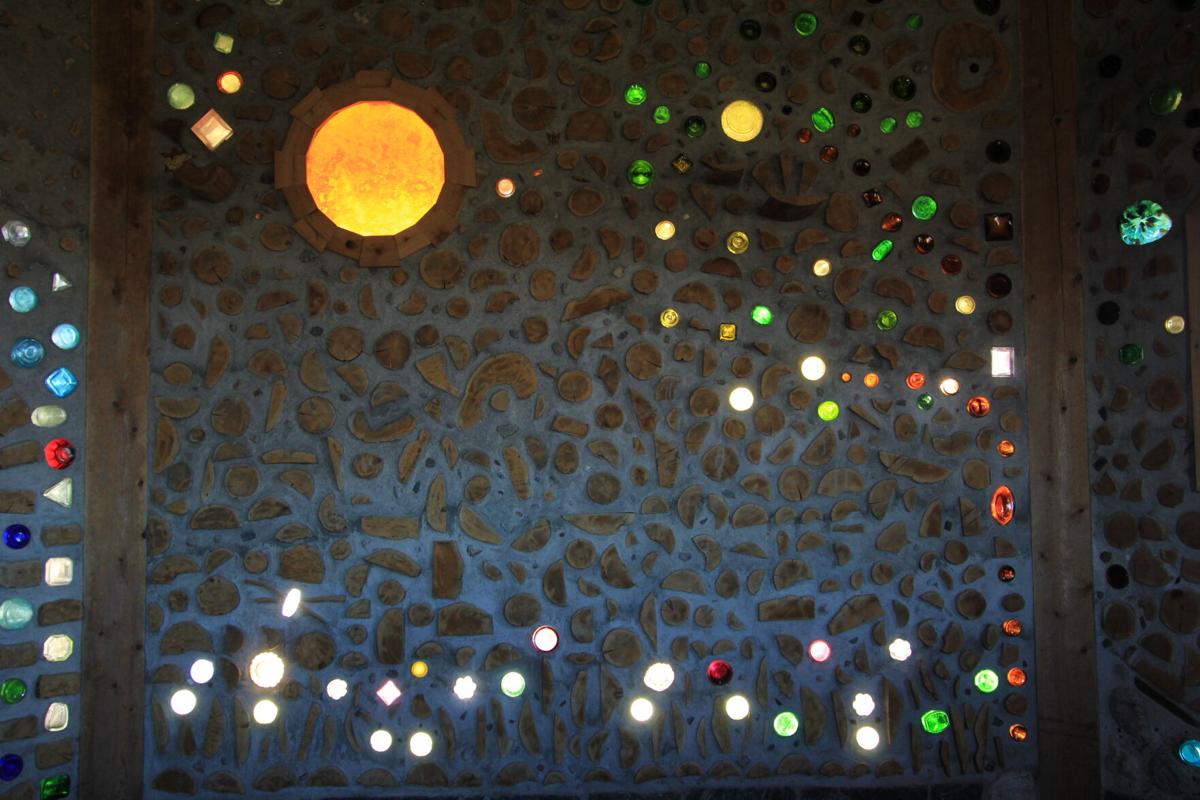 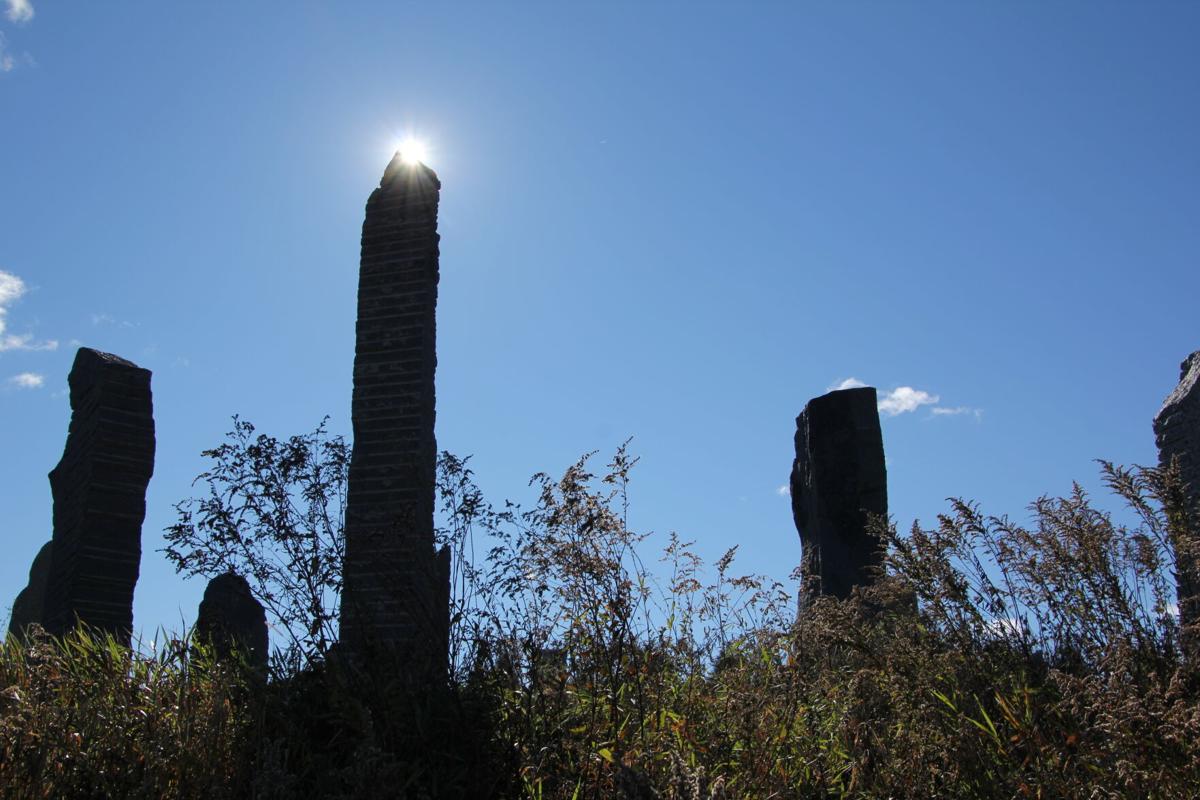 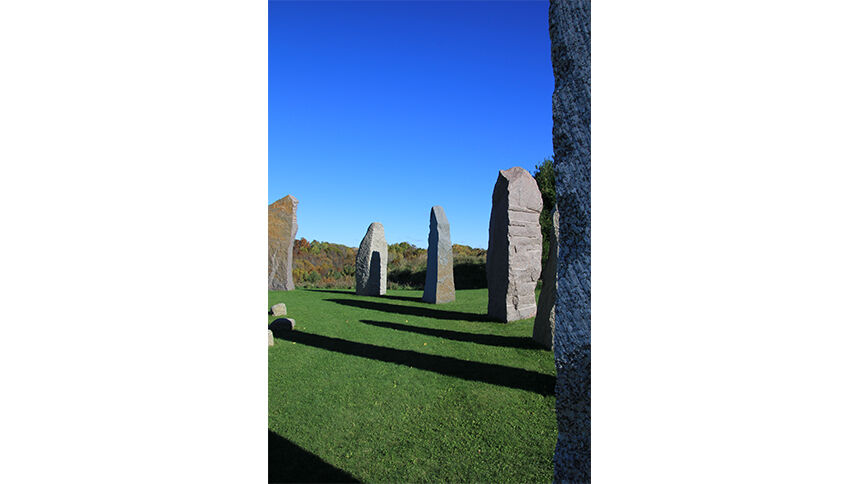 FOUNTAIN CITY, Wis. - On the north-facing slope of a bluff near Fountain City, giant stones rise from the earth forming circles, angles and directions that challenge the imagination.

The place is called Kinstone, and it is the creation of Kristine Beck, who is building her dream on property that has been in her family for four generations.

Beck, who bought the land from her parents in 1994, had many ideas about what to build.

"I thought maybe I could build a bed and breakfast, or a pie shop, or something here for retirement," she said. "And then I looked into permaculture, a way of designing so that you are considering your impact on your environment."

She was interested in permaculture concepts, because "it is based on three things - care of the Earth, care of people, and reinvesting any surplus back into the care of Earth and people," she said.

Beck used keylining, a method of opening space in compacted soil, and terracing to enhance the flow of water across the property. She hired a permaculture designer to help her look at the landscape and create goals for managing it.

"I really wanted to build a stone circle, which is a passion of mine," Beck said, "and is also part of the idea of creating a spiritual place that doesn't really exist in this capacity in the United States."

Beck started serious planning in 2010. She located granite stones in quarries in western Minnesota and eastern South Dakota, transported them on flatbed trailers, and erected them with a 90-ton, all-wheel-drive crane. The stone circle she had dreamed about was finished in October 2011.

Each stone, depending on its size and shape, is buried to a different depth. Most of the stones on the property are 3-7 feet deep.

She has added many more features since then, including a labyrinth, a stargazer fire circle, a circle of mystery with one stone featuring a natural question mark, and many free standing stones, each with some significance to her or her project.

One formation is called a dolman. It has four stone pillars sunk into the earth with a flat capstone weighing 13 tons resting on top of the pillars.

A small, circular building called the Chapel of Creation is special to Beck.

"It has a whole design and story inside," she said. "There are a lot of bottles in those walls, and when the light comes through, you get a stained glass effect. There is a sun, and a moon, and a river, and some trees and flowers. There is wind and fire and a night sky. The chapel is really the heart of the place."

As her background in permaculture grew, Beck, with the help of others, offered classes in permaculture at Kinstone, a name which combines "kin" meaning family with "stone." She recently decided to take a break from the classes and focus her attention on her own landscape.

"Permaculture is not only about the outer landscape, but I also consider it as part of my inner landscape planning," she said. "I've decided to take a step back from the promotion of permaculture education and really live it, to listen to the land for a while, and observe. Observing is one of the main principles of permaculture and really get to know what it is that we have here, and what this sanctuary is."

Beck didn't have a master plan when she started building. Her first goal was to build the stone circle, so she went looking for large stones. As she was searching for the tall stones, "other stones wanted to come along with me," she said, "and they kind of indicated where things might want to be. The stone features and artistic sculptures here grew organically."

One fortunate event happened during the building of the "Three Witnesses," a formation of rocks built by dry-stacking the stones without mortar. It features a large stone with a heart-shaped rock embedded in it. A circular window on the opposite side of the Three Witnesses "highlights the rock perfectly at sunrise on the equinox," she said. "Sometimes things just happen."

Her interest in stone circles has taken her to many places in the world. She has visited the Ring of Brodgar and the Stones of Stenness in the Orkney Islands, and the Callanish Stones on Lewis Island in the Outer Hebrides. She has visited other stone circles in England, Ireland, Scotland, Sweden, Japan, as well as Machu Picchu in Peru.

"It is all very powerful that stone was used in such megalithic proportions throughout history," Beck said. "And how they did it, and why they did certain things is still somewhat mysterious, and I like the mystery."

Although she has no definite plans for new additions to Kinstone, Beck knows that more creations will happen in the future.

"I think that I am an artist and stone is my medium," she said. "It is large-scale art, so we'll see where that leads me."

Beck enjoys seeing how the sun moves in relation to the stones in her landscape. She likens it to a person knowing that during certain seasons, the sun blinds them when they sit at the kitchen table.

"There is an interconnection and interdependence between all things including the seasons and how the sun and stars move, and how the Earth moves in a dance with them, so you get to see that in the circle," she explained. "You can stand and know where the sun will come up in June and then you can see where it shows up in the quarter dates in March and September and also at the winter solstice. You can see how the sun is moving."

One addition that is in progress is an alignment of stones with the summer solstice. Beck said that it is possible to use surveyor's points and calculations to line up the stones, but that the exact alignment has to be in the moment with the human eye.

"It is much better to use the eye to determine where things are supposed to be," she said. "We did some of that this past summer solstice, but I didn't finish what I needed to do, so now I have to wait."