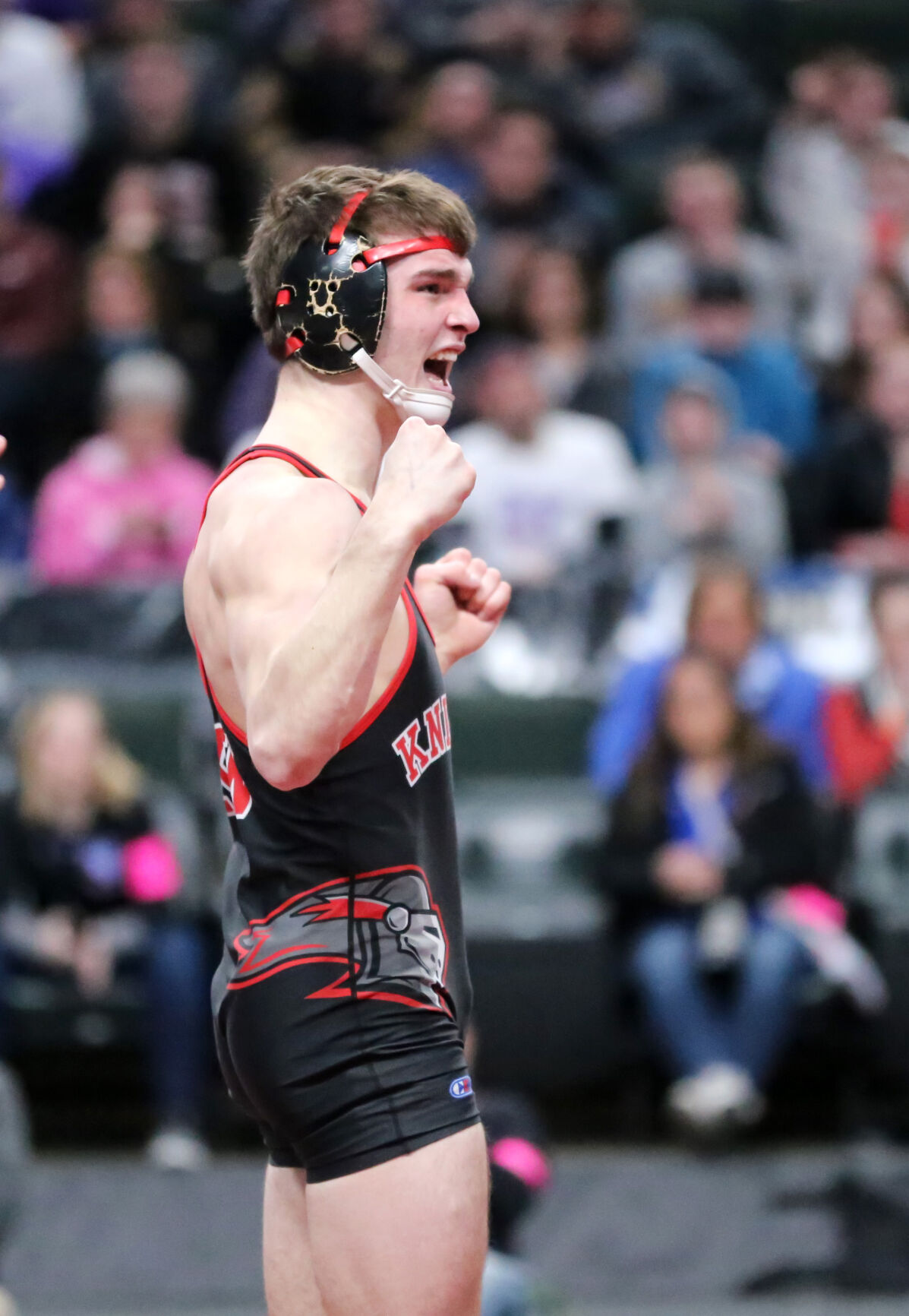 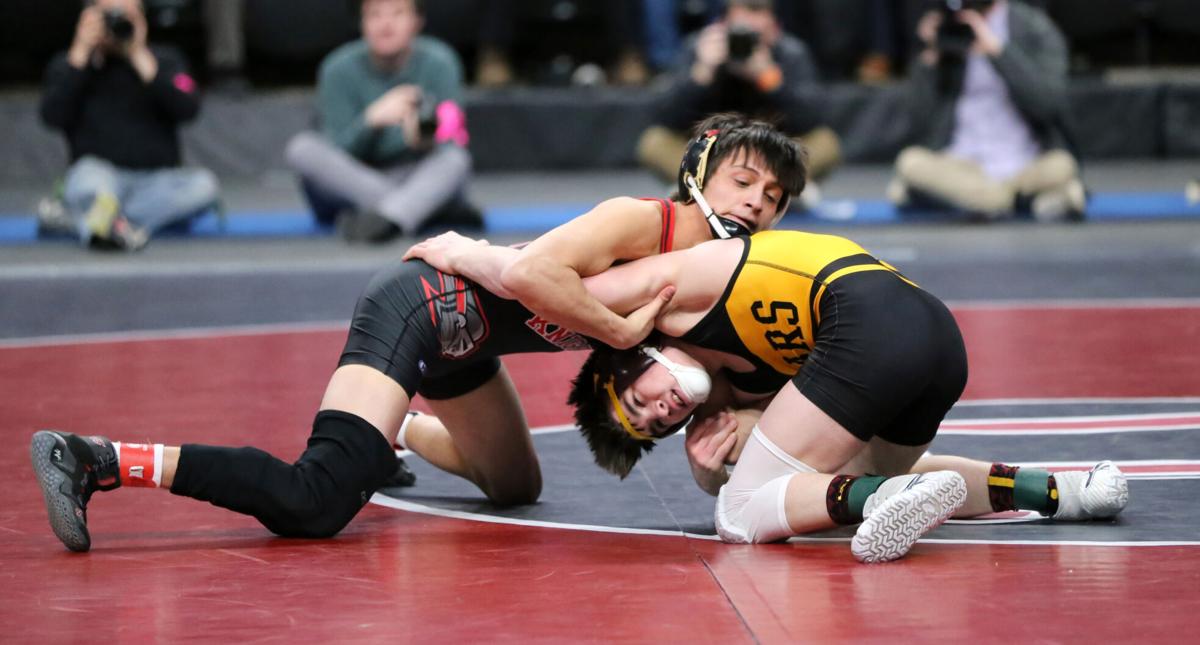 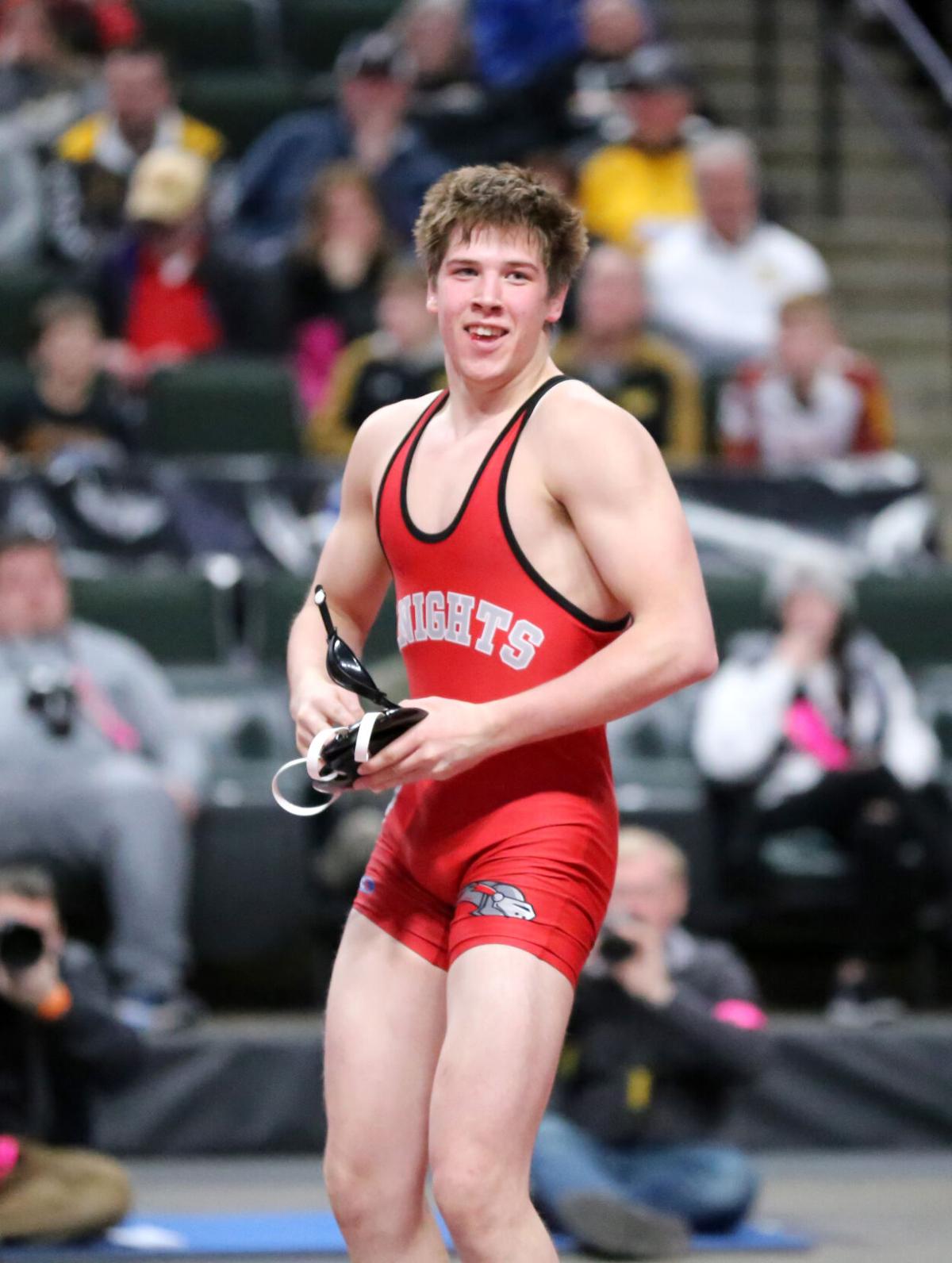 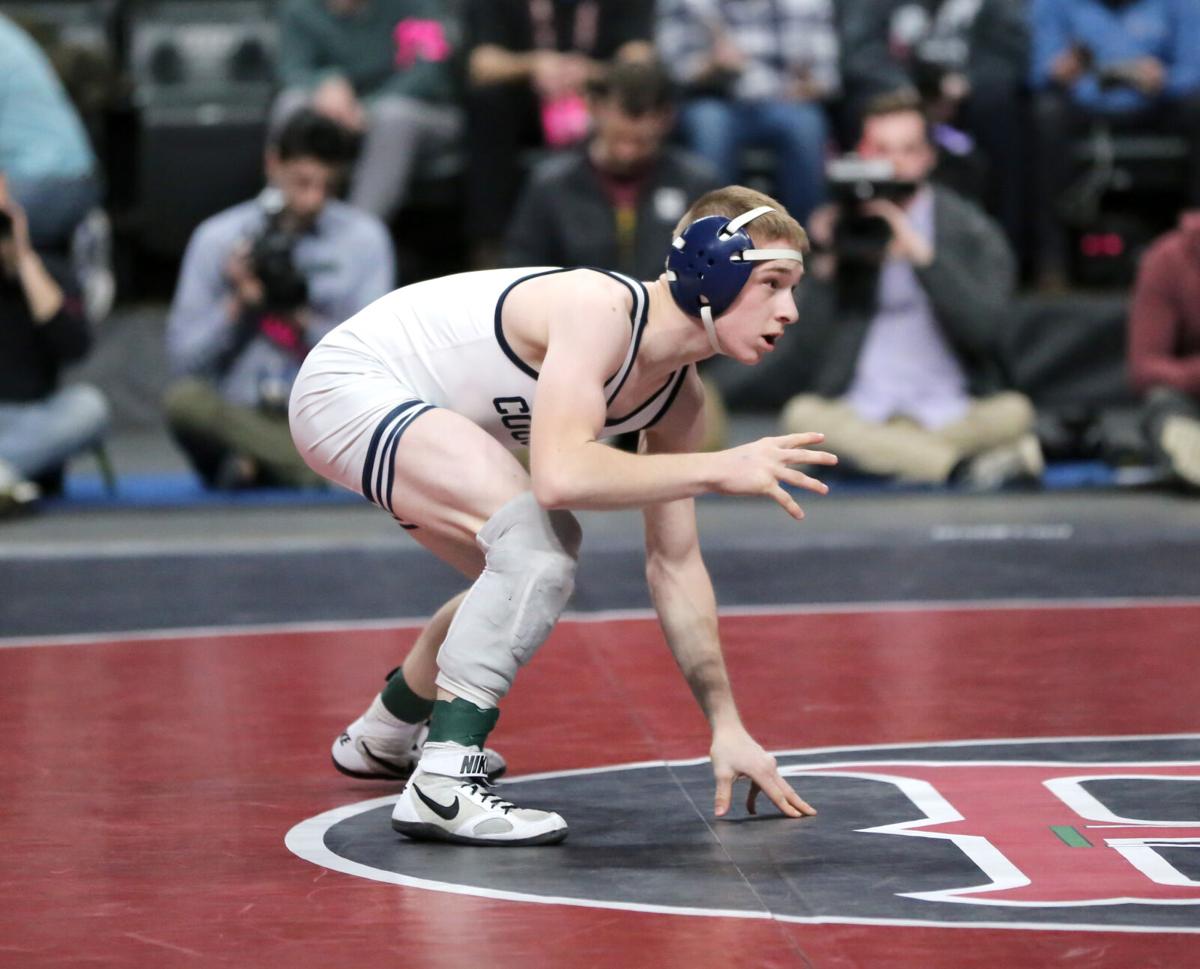 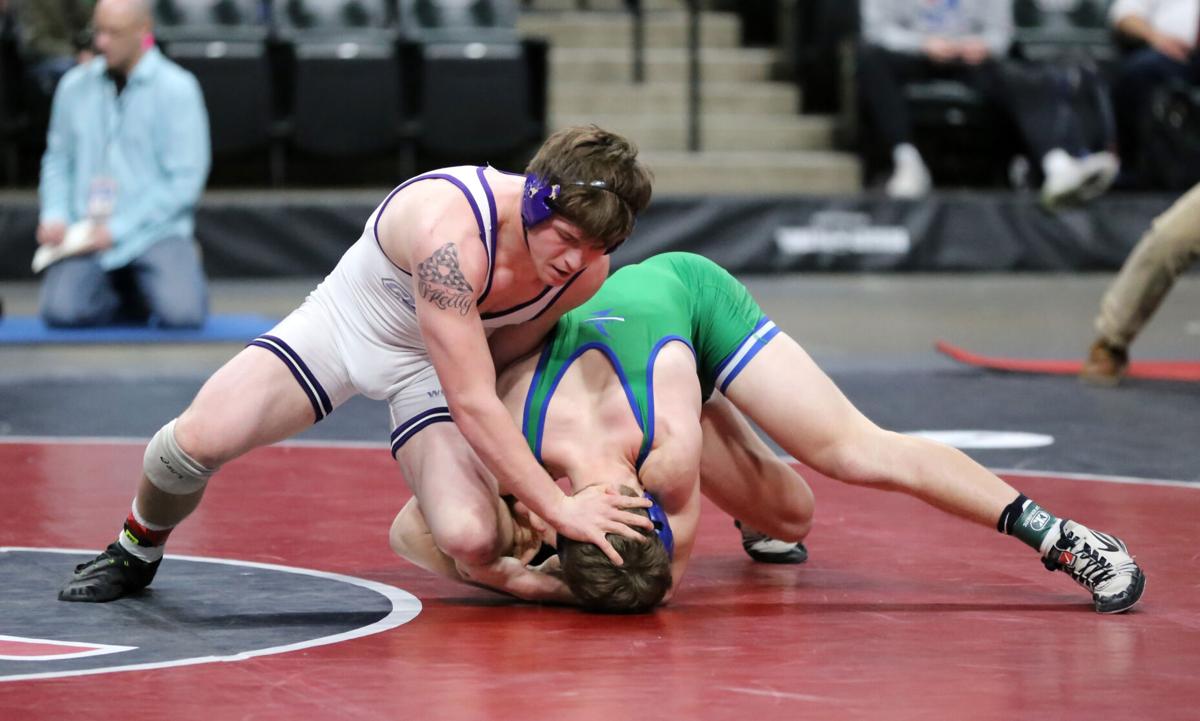 When Jeron Matson is on top, he's hard to beat. In control the entire match Matson finished atop the podium, a state champ.

Matson, one of Kenyon-Wanamingo's six seniors, won the Class A 120-pound state title in a 3-0 decision over Trevor Janssen of Blackduck-Cass Lake-Bena on Saturday.

K-W head coach Matt Ryan said Matson wrestled an almost a perfect match. Ryan said he knew Janssen might choose not to go down to start the second period because he might not escape Matson. Janssen did just so, choosing to stay up and the two continued to slowly circle the middle of the mat in a constant lock.

Tied on the scoreboard 0-0, Matson started down for the third, got the escape to go ahead 1-0, and controlled the remainder of the third en route to the win.

Matson became the first Knights wrestler to win three state titles. His journey to becoming a state champ was put in jeopardy at The Clash on Jan. 4. Matson tore his meniscus and opted for surgery. Five weeks later, he was back for the section quarterfinals on Feb. 16.

"I didn't know how he would respond," Ryan said regarding how Matson would hold up in the state meet. "Jeron handled it well."

Seth Brossard of K-W won via a 9-1 major decision in the Class A 152-pound state title match. Brossard finished the season a perfect 48-0 and was in total control of his match against Chandler Mooney of Roseau, who came in with a 46-0 record.

Brossard made previous trips to the state tournament, but none resulted in a title until this year, his senior year.

After a scoreless first period, Mooney got an escape to go up 1-0. It was the only point he could muster as Brossard went ahead with a takedown in the middle of the second.

Brossard remained on the attack and scored seven more points in the third, holding off Mooney for the win.

Ryan said Brossard trained hard and has been consistent for the team, as evident by his unblemished record.

"He did everything right," Ryan said of Brossard's year as a whole. "He did a great job of fending off the desperation (in the title match) and set a good pace throughout."

"The only one in the building"

Like Matson, senior Knight Tyler Ryan had surgery to repair a torn meniscus. Matt Ryan believed Tyler took it harder than Matson did because this was Tyer's second tear of the same knee.

"The worst part was coming back to trust his knee," Matt said.

After the first tear, Tyler chose to rehab, a stint that lasted eight months. He missed his whole junior year of wrestling and was unable to compete in baseball, too.

He finally returned to the mat at The Clash on Jan. 4 and here he was, wrestling for a chance at a state title.

Yet, according to Matt, Tyler didn't look like himself. It may have the emotion of watching his friend Brossard win on the same mat less than a minute before, or it may have been the exhaustion left over from the state team tournament on two days prior. Whatever it was, Tyler and Owen Bjerga of Staples Motley were locked in a close match. Tyler led 5-4 after one period and Bjerga led 7-6 after two.

Tyler needed every second, but got a two-point takedown in time to win his second Class A state title with 10-9 decision over Bjerga at 160 pounds.

Matt admitted he thought there was no way Tyler would win.

"(Tyler) might have been the only one in the building that thought he would win," Matt said. "He just didn't wrestle the way he usually does."

Tyler's two-point takedown came with fewer than 10 seconds to go in the match, stunning possibly everyone watching.

"There was too much going on in the final seconds for me to build emotion," Matt said. "I said, 'Are we going to win? Oh my gosh, that happened.'"

Tyler and Matt embraced in a hug after the match. Waiting in the tunnel with tears in his eyes was Brossard. The two shared a hug immediately after Tyler left the mat.

"The last 10 seconds have changed how we feel today and how we'll feel in the next five years," Matt said.

Michael Majerus of Zumbrota-Mazeppa lost in the Class A 106-pound state title match on Saturday. Majerus lost 5-2 to Draydon Morton of Sibley East.

Kaleb O'Reilly of Goodhue fell 9-6 to Tyson Meyer of Minnewaska in the Class A 170-pound championship match.

Kaya Lindell of Kenyon-Wanamingo won a Class A third-place match at 220 pounds with an 8-6 win over Dylan Jergenson of Minnewaska. Kodee O'Reilly of Goodhue placed fourth in Class A 220 pounds after winning 9-3 against Nick McCabe of Caledonia/Houston.

Jesse Jackson of K-W also finished in third place in the heavyweight division in Class A. Jackson beat Cian Buehler of Ottertail Central by injury default at 3:00.

Jonathan Harvey of Lake City earned fifth place at Class 2A 106 pounds with a 3-2 win over Ty Spicer of New London-Spicer.

Baxter O'Reilly took sixth place at 145 pounds in Class A after losing 4-3 to Zach Spinks of Windom-Mountain Lake.