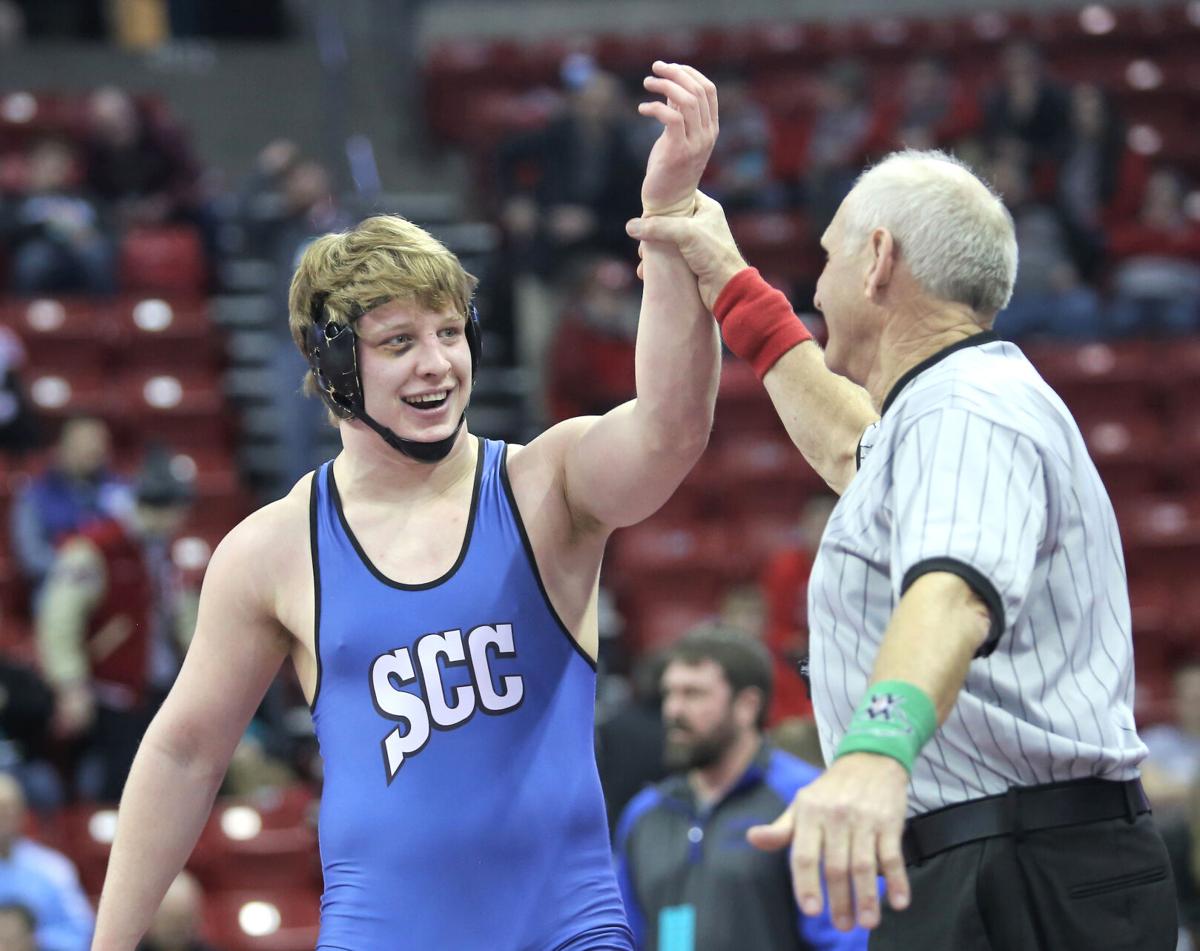 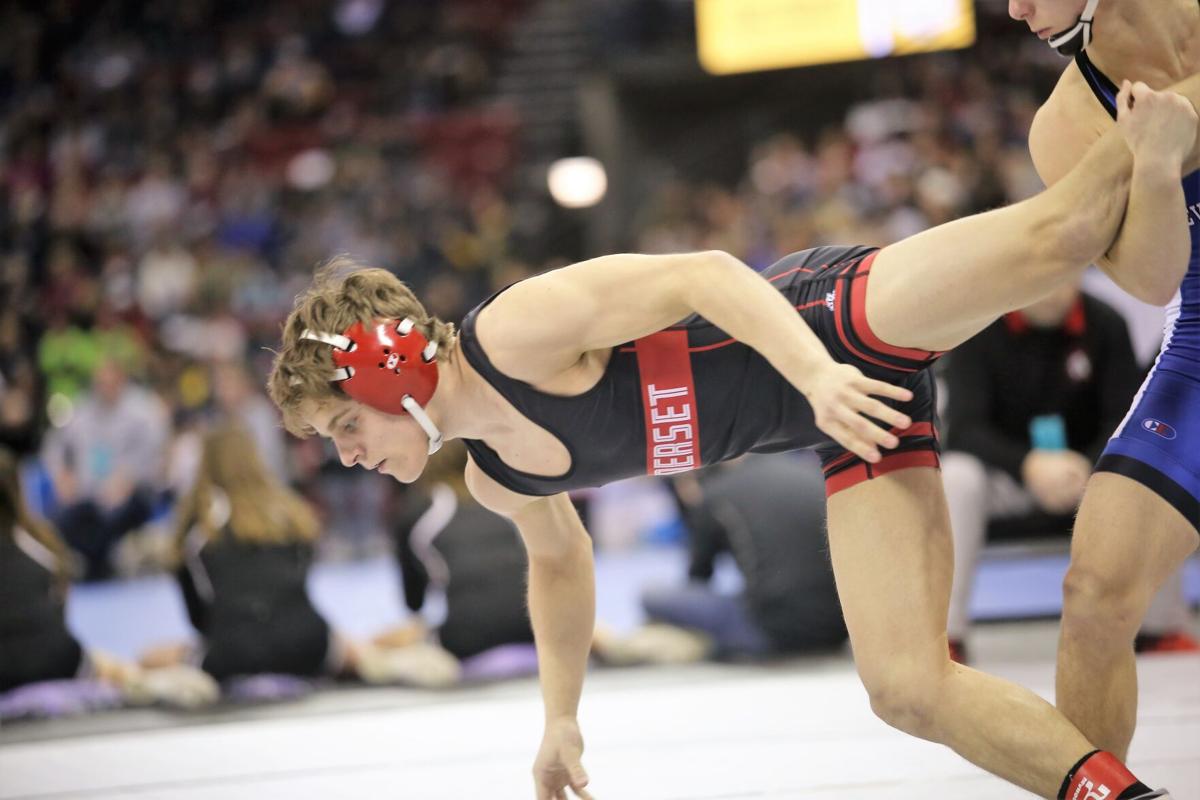 St. Croix Central senior Ryan Larson and Somerset junior Tyler Hantsbarger both got to finish their 2018-19 wrestling seasons by receiving a state placewinner medal on the awards podium at the WIAA State Wrestling Championships on Saturday at Madison.

New Richmond senior Jake LaVenture also competed at state, but was defeating in the opening round of the Division 1 bracket at 195 pounds.

Larson finished this season with a 20-6 record after winning the WIAA Division 2 state championship at 195 pounds last year.

There are few wrestlers who had a more physically challenging season than Larson. He needed knee surgery following an injury in the WIAA Division 4 state football championship game. He is scheduled to have back surgery in the upcoming weeks. He wrestled at state with a broken nose and black eye suffered during a match at the sectional tournament.

Larson’s pivotal match was against Medford junior Jake Rau in the 220-pound semifinals. Larson and Rau have wrestled twice earlier this season, with each wrestler winning once. The Panthers knew Rau used a very cautious defensive style, especially when leading. At the sectional meet, Larson got an early takedown, which forced Rau to be more aggressive.

The opposite happened in the state match. Larson and Rau both tried for a throw at the edge of the ring, seconds into the match. Larson landed on his back and couldn’t break free. He thrashed around to get called out of bounds, but he was now facing a 5-0 deficit. Larson kept pursuing Rau, and several stalling calls were made, but Rau was able to hold off Larson for a 6-3 win. Rau went on to win the state championship, defeating Valders senior Jackson Linsmaier 4-2.

Holzer said the loss was difficult for Larson, who was only going to be satisfied if he won another state championship. In the opening wrestleback match on Saturday, Larson got a takedown against Monroe junior Bodie Minder. Larson tried to ride Minder, but Minder was able to reverse him to a headlock for the pin.

In the fifth place match, Larson and Max Strand of Xavier battled to overtime. Larson tried to force a move and Strand countered, locking Larson in a bearhug and getting the pin.

Holzer said he didn’t think the disappointment of the state tournament would bother Larson for long.

“I think he’s in a good place mentally,” Holzer said.

Larson opened action on Friday by pinning Matthew Schorer of Elkhart Lake-Glenbeulah in 56 seconds. Schorer is a very thickly built wrestler, but Larson was still able to get his arms around him. Larson bearhugged Schorer and threw him to the mat for the quick pin.

St. Croix Central coach Brad Holzer said Netzler did all he could to stay away from Larson. Once Larson was able to get Netzler in a body lock, he quickly threw him to the mat and locked down the pin.

Wrestling a grueling schedule all season paid off for Hantsbarger in his sixth place finish in the Division 2 126-pound bracket at the state meet. Hantsbarger, Amery’s Walker Ingham and Baldwin-Woodville’s Jordan Bonte all finished among the top six in the state weight bracket, testifying to how talented the class was within the Middle Border Conference this season. Ingham placed third at state and Bonte fourth.

Four of Hantsbarger’s matches at state resulted in extremely close finishes. That included the fifth place match, where he lost to Freedom’s Koy Murphy, 2-0. In the wrestleback to get to the third and fifth place matches, Hantsbarger lost to Ingham, 2-1.

After winning his opening match on Thursday, Hantsbarger faced a tall order to start Friday’s action. He faced Cody Holmes of Two Rivers, the top ranked Division 2 126 pounder in the state. Holmes showed he was deserving of that honor. From the opening whistle, Holmes reached in for a single-leg takedown in the first five seconds of the match. He kept the pressure on Hantsbarger, pinning him in 47 seconds. Holmes went on to win the state title.

Somerset coach Ali Peterson said the loss was educational for Hantsbarger. In the wrestleback Hantsbarger faced Port Washington junior Blake Peiffer. The match was scoreless until the third period, where Hantsbarger started in the top position. Peterson said Hantsbarger was riding well, but quickly got reversed. Hantsbarger reacted quickly, getting an escape 10 seconds later. The score stayed 2-1 until the final seconds. Hantsbarger was close to a takedown by using a kelly roll. As the clock ticked down he jumped to the other side of Peiffer to secure the takedown, which was called with three seconds left in the match.

Peterson said Hantsbarger did a great job of shaking off the loss to Holmes.

“He reset and did a beautiful job in the wrestlebacks,” Peterson said.

“It was a great way to start,” Peterson said of Hantsbarger’s opening effort. “He really opened up nice.”

Hantsbarger finished his season with a 38-10 record.

New Richmond senior Jake LaVenture had an injury short-circuit his stay at the Division 1 state meet. LaVenture lost on a second period pin, but he was dazed after striking his head on the match.

The first period in his match against Brookfield East senior Jacob Mandella was scoreless. Mandella chose the down position for the second period. Mandella stood up and as LaVenture brought him back to the mat, he struck his head.

“He was dazed and Mandella got right off his back and reversed Jake,” said New Richmond coach Jeff Swanson. Seconds later, Mandella was able to finish the match with a pin in 3:17.

LaVenture finished his senior season with a 30-14 record.

Swanson said LaVenture’s season should be remembered for how he moved from 182 to 195 for the tournament series, defeating several top wrestlers to earn his place at state.

“It was a great three weeks for him. It was a wonderful way to finish out his career,” Swanson said.