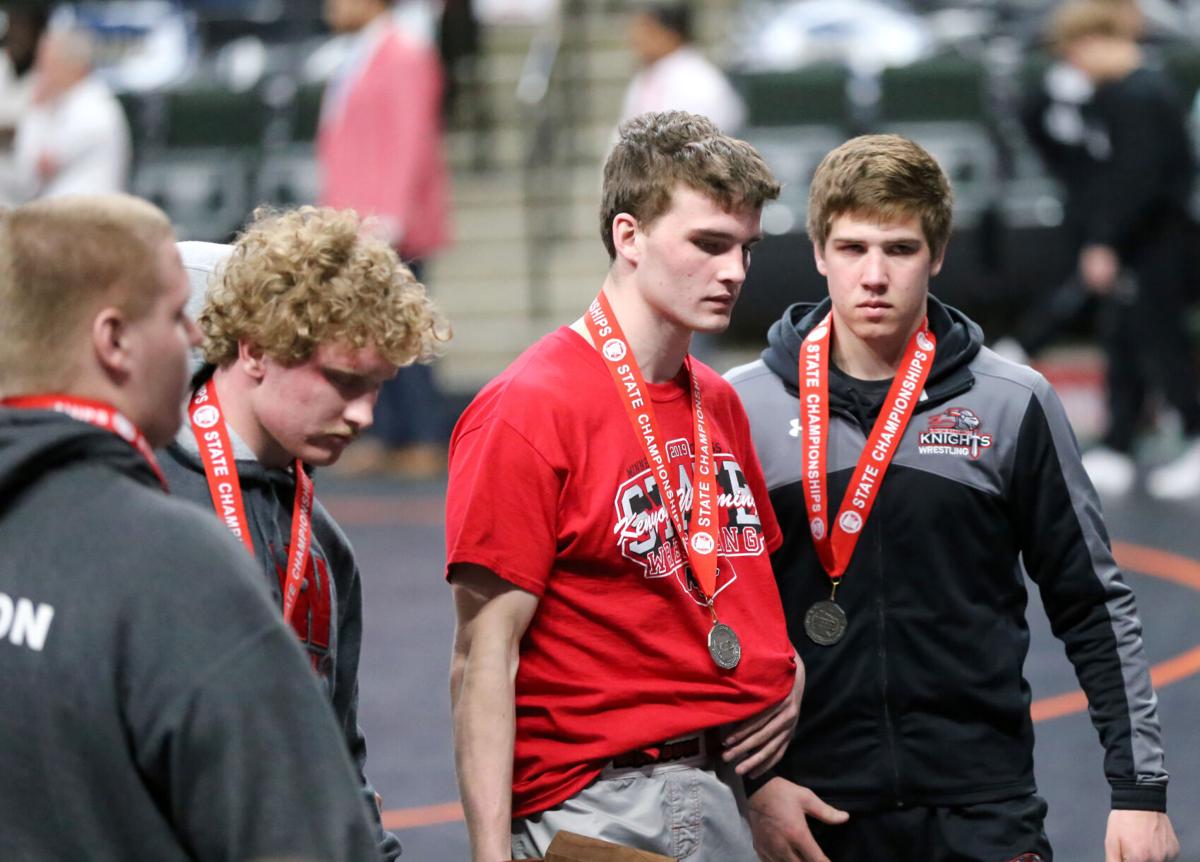 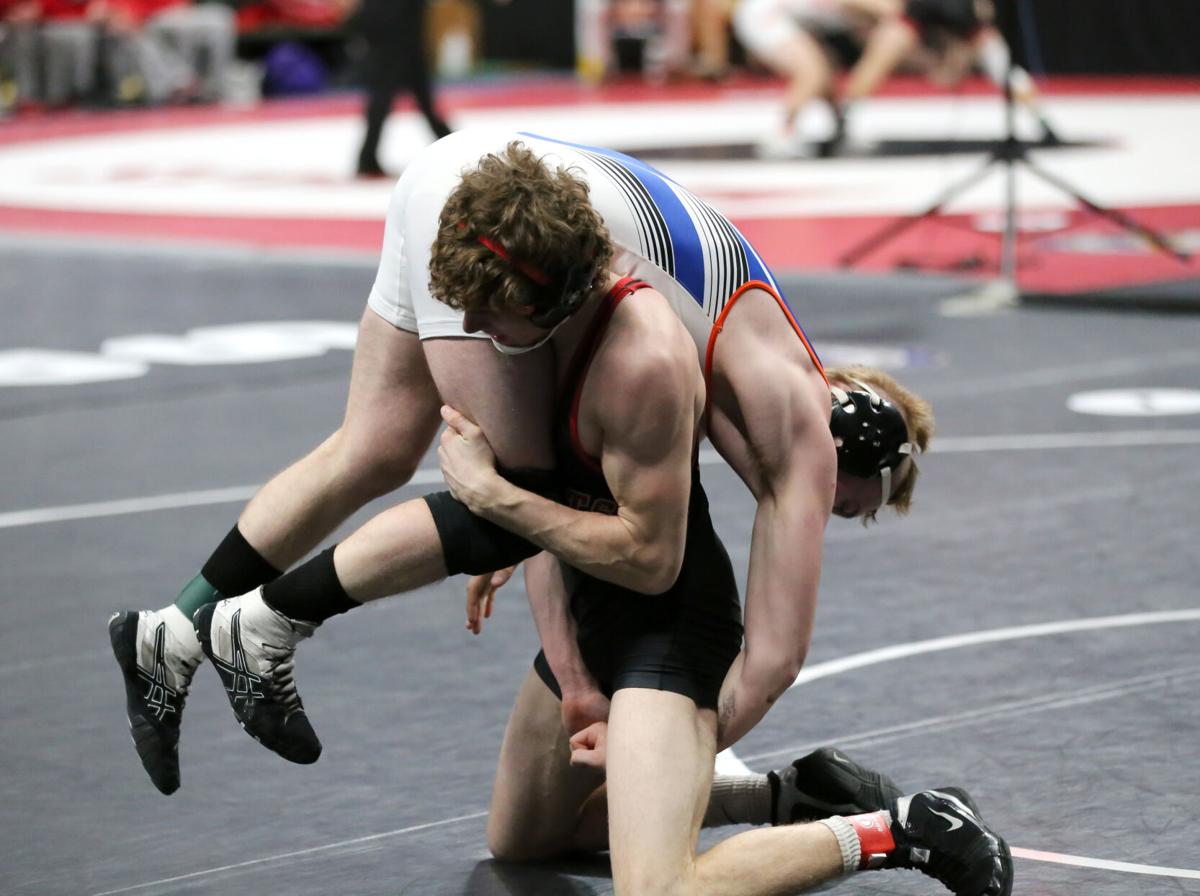 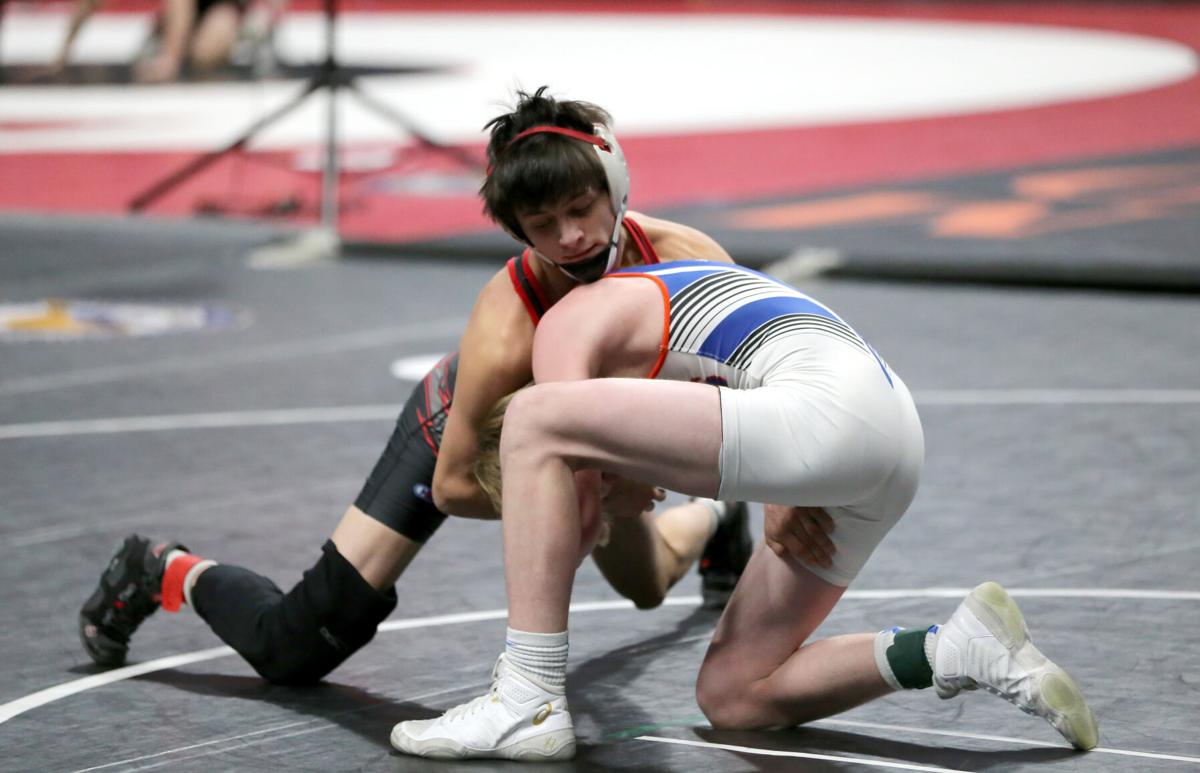 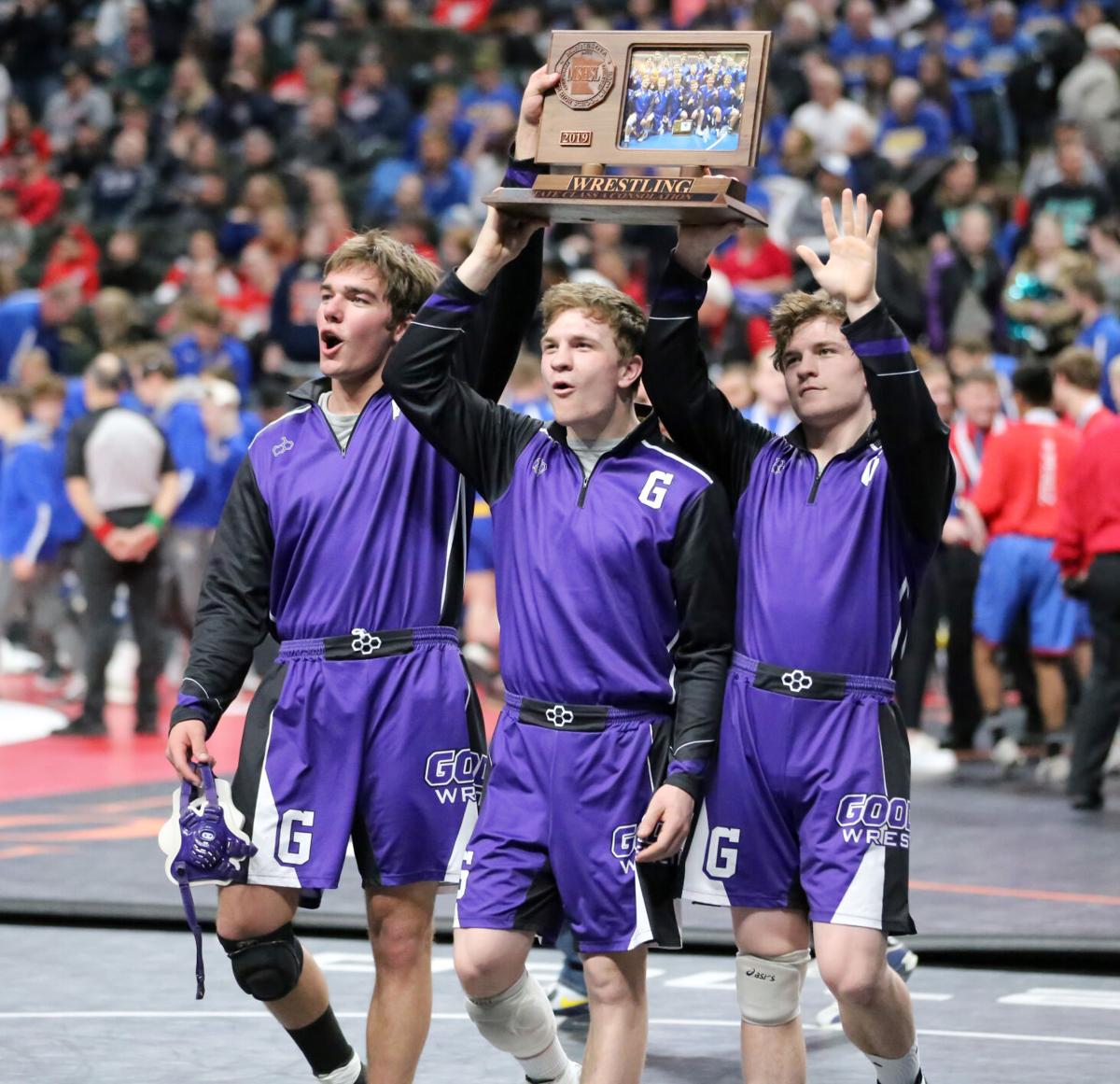 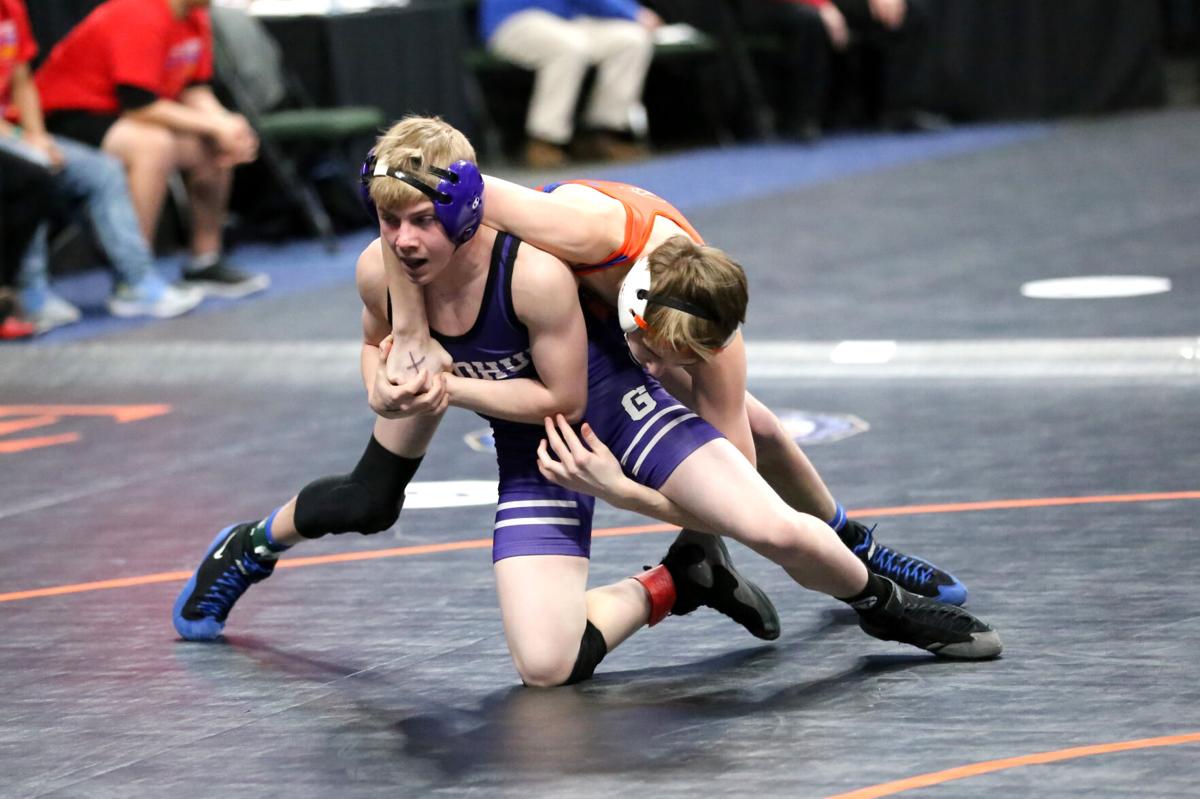 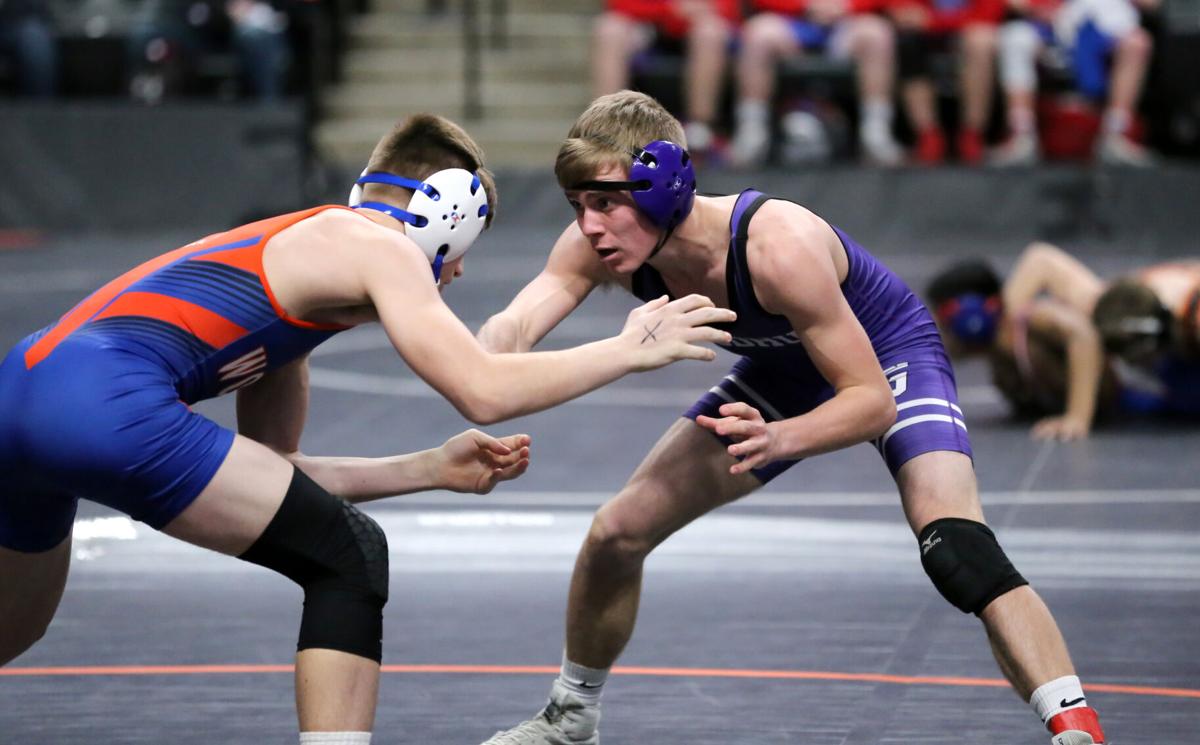 Despite prior injuries earlier in the season to two of Kenyon-Wanamingo's seniors, the wrestling team came to the state tournament at full strength. After victories over Aitkin and Tracy-Milroy-Balaton, the fourth-ranked Knights faced No. 1-ranked-according to The Guillotine-LPGE-Browerville for the Class A title.

In the end, the momentum just wasn't in the Knights' favor as they fell 35-27 to finish in second place.

"There's definitely the momentum factor," said K-W head coach Matt Ryan. "Any time there's a match that comes right down to the last few seconds of the third period and it gets decided at that point, that's a huge momentum swing. We were on the wrong side of that today. We had plenty of opportunities to make up the difference. I said if we wrestled that team ten times, how many times could we beat them? Probably three or four, maybe. You don't have to be the best team. You just have to be the best team in one match to have a shot.

"You get yourself in this match and you want it to work out. We just needed one or two more things to go our way. There were a couple key matches in there that didn't happen. I'm proud of our kids to get back to this (championship) again. We've had an up-and-down season. It finally came together at the end and we were wrestling as good as have all season here the last few weeks."

Many of the matches were decided by decision and a couple were decided in the final minute of the third period.

It was quite the turnaround appearance for the Knights as they had four wrestlers suspended from last year's team tournament. Then this year, Jeron Matson and Tyler Ryan each tore their meniscus and underwent surgery.

Matson and Ryan as well as four other seniors-Nathan Bauer, Seth Brossard, Kaya Lindell, Jesse Jackson-combined to win 10 of 12 matches by pin prior to the championship dual.

"Those six guys were kind of the heart and soul of our team," Ryan said. "They left it all out there today and we got as much out of the rest the 13 as we could. A few of those guys were on our state championship team in 2016. They wanted another shot and got back to the match. They had a good day. I'd like to get them one more, but that's way it goes."

The Wolves won the next four matches, three by decision and one by pin. The Knights trailed on the scoreboard 22-3 heading into the 152-pound match. Seth Brossard (152) won by pin, a huge possible turn in the dual if the Knights could win the next few matches.

Unfortunately for the Knights, Austin Carr (160) and Gabe Pesta (170) won by major decision and by pin, respectively, in the next two matches. Tyler Ryan (182) won by pin to keep the Knights' hopes alive, but the dreams of a state title were dashed by Caleb Pesta's (195) 10-4 win over K-W's Owen Hilke.

Kaya Lindell (220) and Jesse Jackson (285) each won by pin for the Knights to close out the dual.

"Everything was going the right way," Ryan said. "We beat a good Tracy team to get to the finals. There was no guarantee in that match either and we wrestled well. It sucks losing in the finals and I hate losing as much as anybody, but we have to try and look at the other side of it."

For the Knights to continue success next season and beyond, Ryan said they'll need the next group to step up like the six seniors have this year.

"Our sophomores are going to have to step up," Ryan said. "We have one junior on the team. That will be the key to see if they can be that next group. We've had some really good groups."

Goodhue fell to eventual state champion LPGE-Browerville in its first dual of the day. The Wildcats fell behind 20-0 on the scoreboard in the first five matches. The Wildcats were able to make a late push in the dual, but it was too late as the Wolves won 30-24.

The Wildcats rebounded with a 32-21 win over Badger-GB-BR in the consolation semifinal. Makae O'Reilly (113) started a sting of five consecutive match wins for the Wildcats. Leading 21-16, Kaleb O'Reilly (195) pinned Jacob Bergsnev to secure the win.

Kaleb (195) and Kodee O'Reilly (220) each picked up third-period pins en route to hoisting the fifth-place trophy.