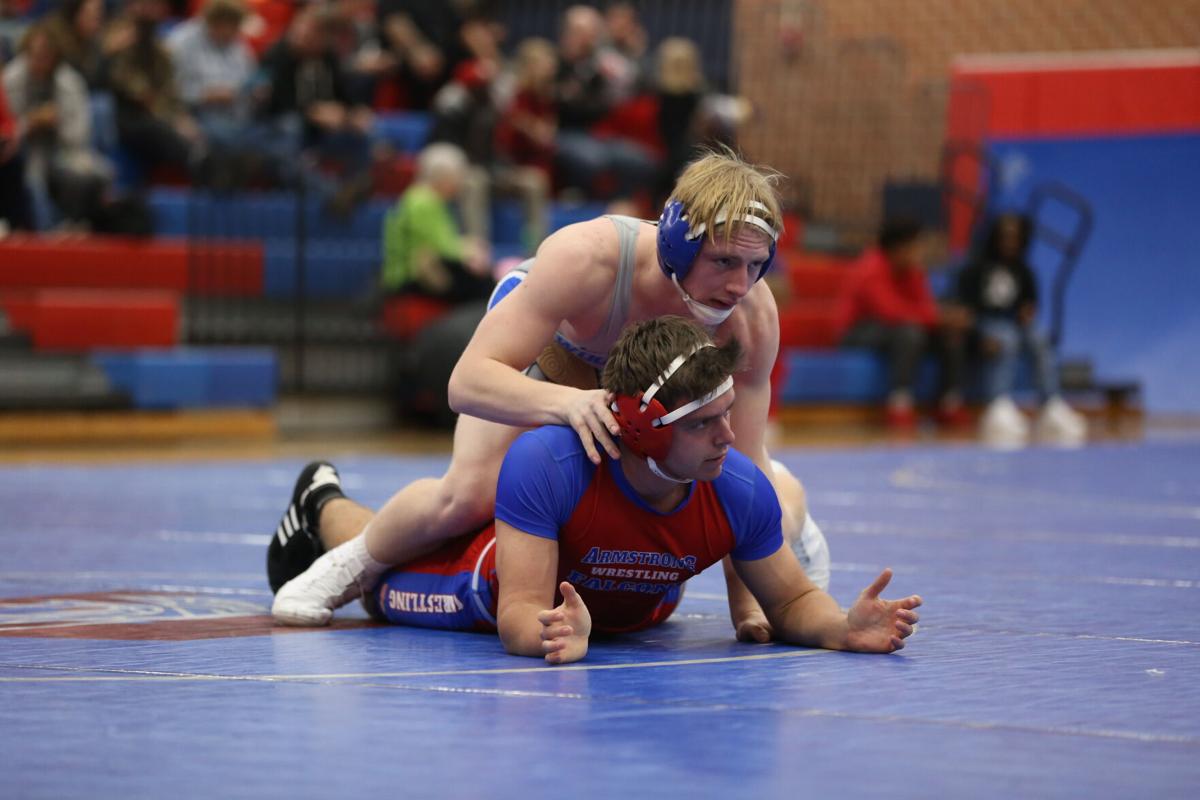 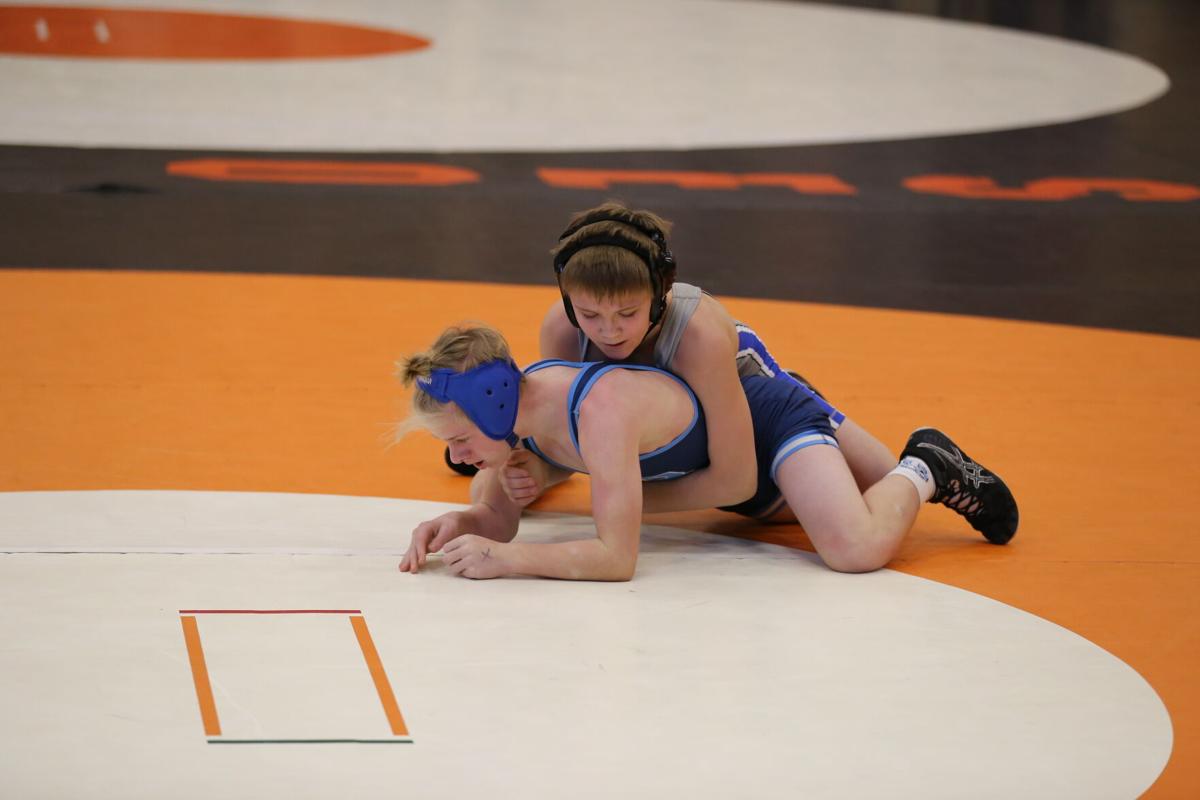 The Woodbury wrestling team has had a few busy weeks with multiple tournaments and invitationals. The positive side of these types of tournaments is the ability to see growth and also see where a wrestler needs to grow.

The Royals had some strong finishes over the past couple of weeks and head coach Justin Smith is excited about the upcoming six weeks before the section tournament.

"It's great to compete against strong teams and wrestlers for the last couple of weeks," Smith said. "These matches expose our weaknesses, which is good to see halfway through the season. Now, we need to continue growing so we're ready for sections."

Woodbury started its busy schedule in Chisago Lakes a few weeks ago on Dec. 20, for a team invitational. The Royals finished in first place after some key finishes by individual wrestlers.

Eighth grader Alex Braun, junior Will Bents and senior Brock Rinehart all finished first in their respective weight classes. The Royals had 15 wrestlers compete at the invitational and all 15 wrestlers finished in the top eight for each weight class to give Woodbury the needed points to win.

"We learned about how much depth we have on this team in Chisago Lakes," Smith said. "We're looking at the process and not the product because the product will come if we do the process right. It was definitely a confidence boost for these wrestlers heading into the winter break."

In the middle of the winter break, the Woodbury coaches and wrestlers traveled up to Fargo, N.D., for Rumble on the Red — one of the most competitive tournaments throughout the season and the Royals were able to see teams from different states across the Midwest.

The tournament took place on Dec. 27-28. There were a handful of Woodbury wrestlers that made it to the second day of wrestling, while others understood their weaknesses and continued to grow from the weekend.

Even though the Royals finished 17th as a team, there were plenty of aspects to take away from the two-day event. Braun finished in sixth place at 106 pounds and faced some of the toughest competition in his early career.

The other wrestler that finished in the top eight was Rinehart, who ended up winning the 182 weight class. He defeated Corbin Okeson from Bishop Ryan in the championship match with a 13-10 decision.

Smith added that some of the wrestlers couldn't make it due to family obligations and winter break activities, but he was able to see more of that depth of the team. This makes him excited about the rest of the regular season.

"With this type of depth, there will be plenty of competition in the weight room as many of our wrestlers will compete for a starting spot in this second half," Smith said. "Hopefully the competition will bring out the best in each wrestler."

The Royals had about a week after the Rumble on the Red to rest up before entering the Stillwater Quadrangular on Jan. 2. Woodbury faced off against conference opponent Stillwater as well as Albert Lea and Eagan to start off the new year.

The Royals wrestled Albert Lea first and were able to control most of the match resulting in a 52-29 win for Woodbury. Braun started the match off with a pin followed by another pin by Bents. Albert Lea took control in the middle weights, but the Royals were able to push back at the end with five straight pins to close out the win.

After the first match, Woodbury prepared for rival Stillwater in the second match. The Ponies are one of the favorites to not only reach the state tournament, but compete for that top place at state.

Braun earned the first points for the match and it continued to go back-and-forth for the first few matches. Then, Stillwater went on a roll in the middle weights as the Ponies captured six-straight match wins to take the lead.

Rinehart, Mason Barrows and Denis Tokin were able to earn some points for the Royals, but it wasn't enough as Stillwater won 51-25. Woodbury came back from the hard loss to win its final match of the night as the Royals defeated Eagan 54-24 to go 2-1 on the night.

It was a strong night for the Royals as the growth and improvements continue to happen each day and that's what Smith wants to see, so the team is ultimately ready when the section tournament comes in the middle of February.

"We have six weeks until sections and we're building to be our best at that moment in the season," Smith said. "Every match is important and it's not about the results. We want to see them pushing for those extra points and really giving everything they have in each match."

This past Saturday, the Royals traveled to Cannon Falls to compete in an invitational. Woodbury, the team finished first with 217.5 points.

The Royals had some strong finishes with individual wrestlers. Braun finished in second place at 106 behind a Pine Island wrestler.

Bents wrestled at 126 and finished third in that weight class, while Cade Johnson ended his day in second place at 132. Nick Howe finished in fourth place at 145 and Omar and Ahmed Abdelal ended the invitational in fifth place at 160 and 170.

Rinehart continued his success with another first-place finish at 182, but Tre Hockenberger also had a good day at 195 as he finished in first place, too. Mason Barrows finished fourth at 220, while Denis Tokin ended in third place at heavyweight. Those top-five finishes allowed the Royals to earn that top spot as a team.

Smith said they will continue to use that mindset as they prepare for more duals and invitationals in the coming weeks. Woodbury's next challenge will be on Thursday, Jan. 9, at Woodbury High School as the Royals host East Ridge and Park in a crosstown rivalry.