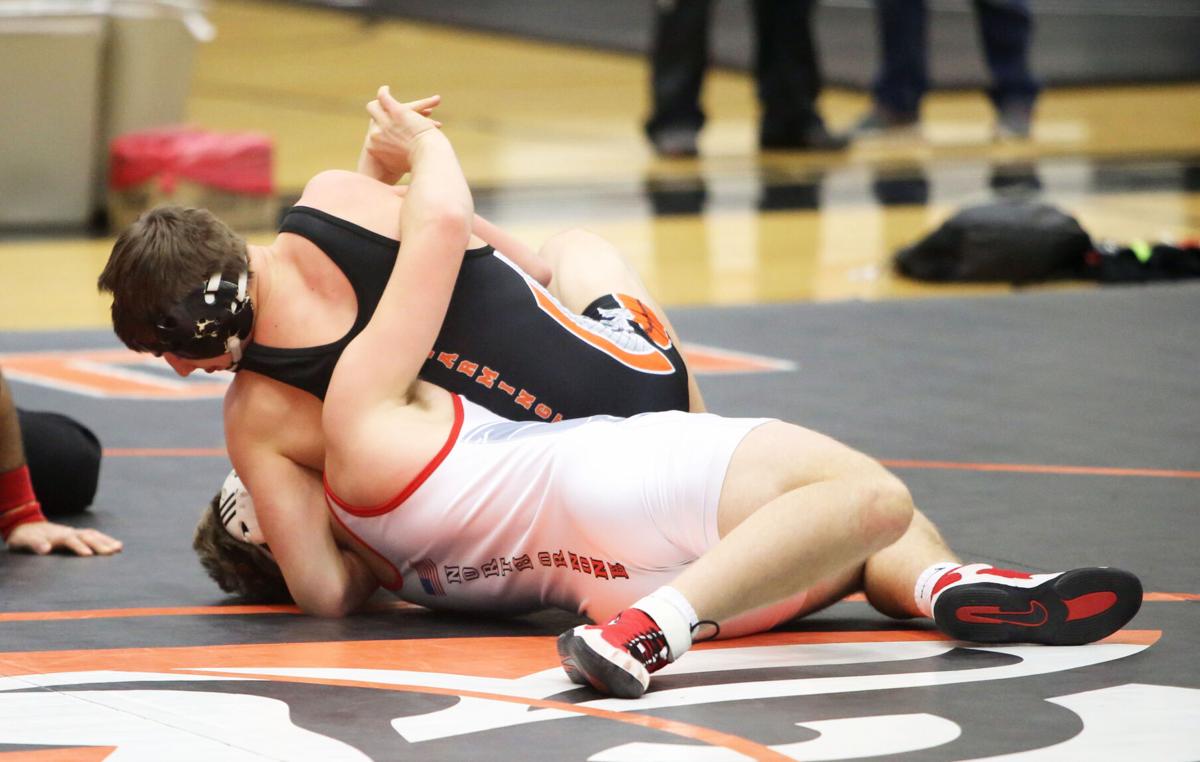 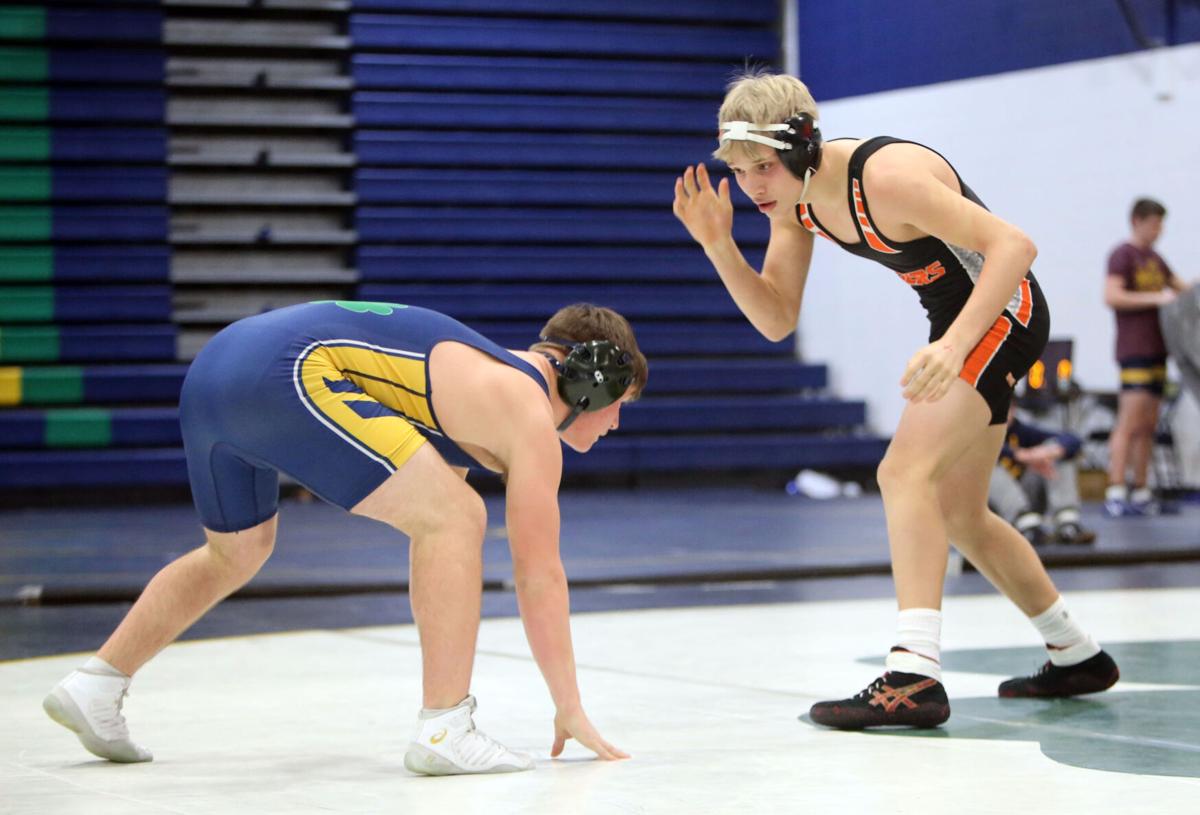 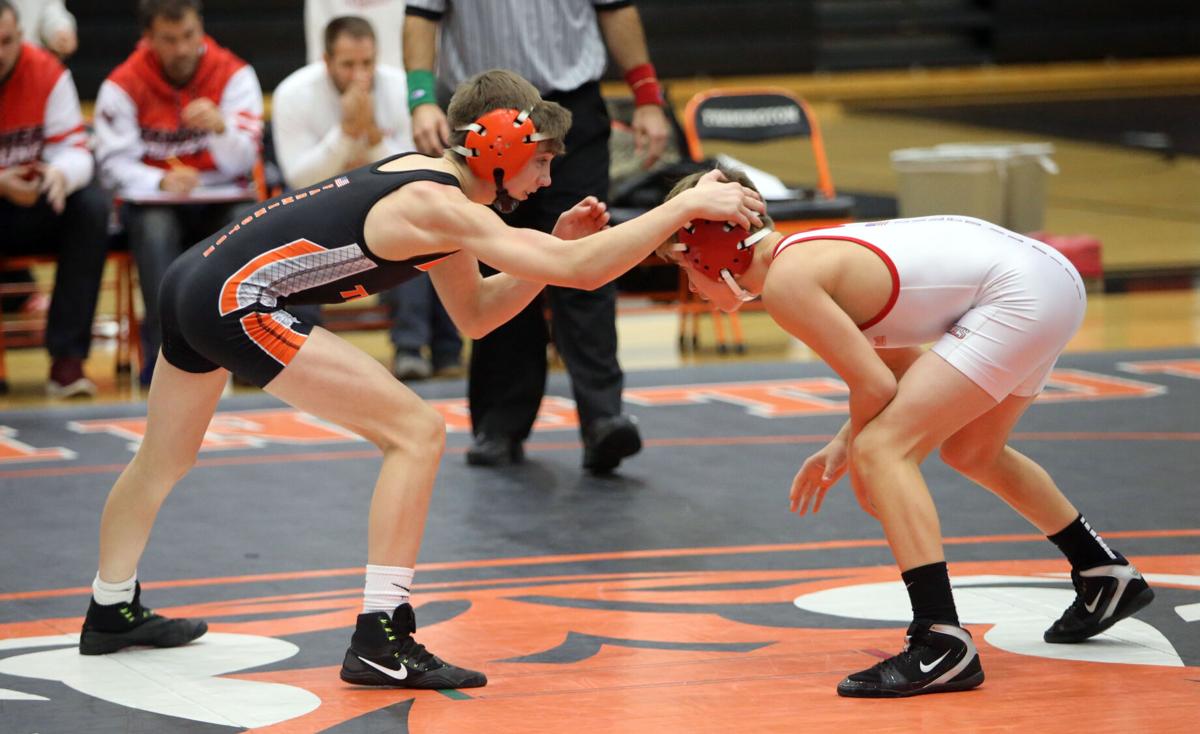 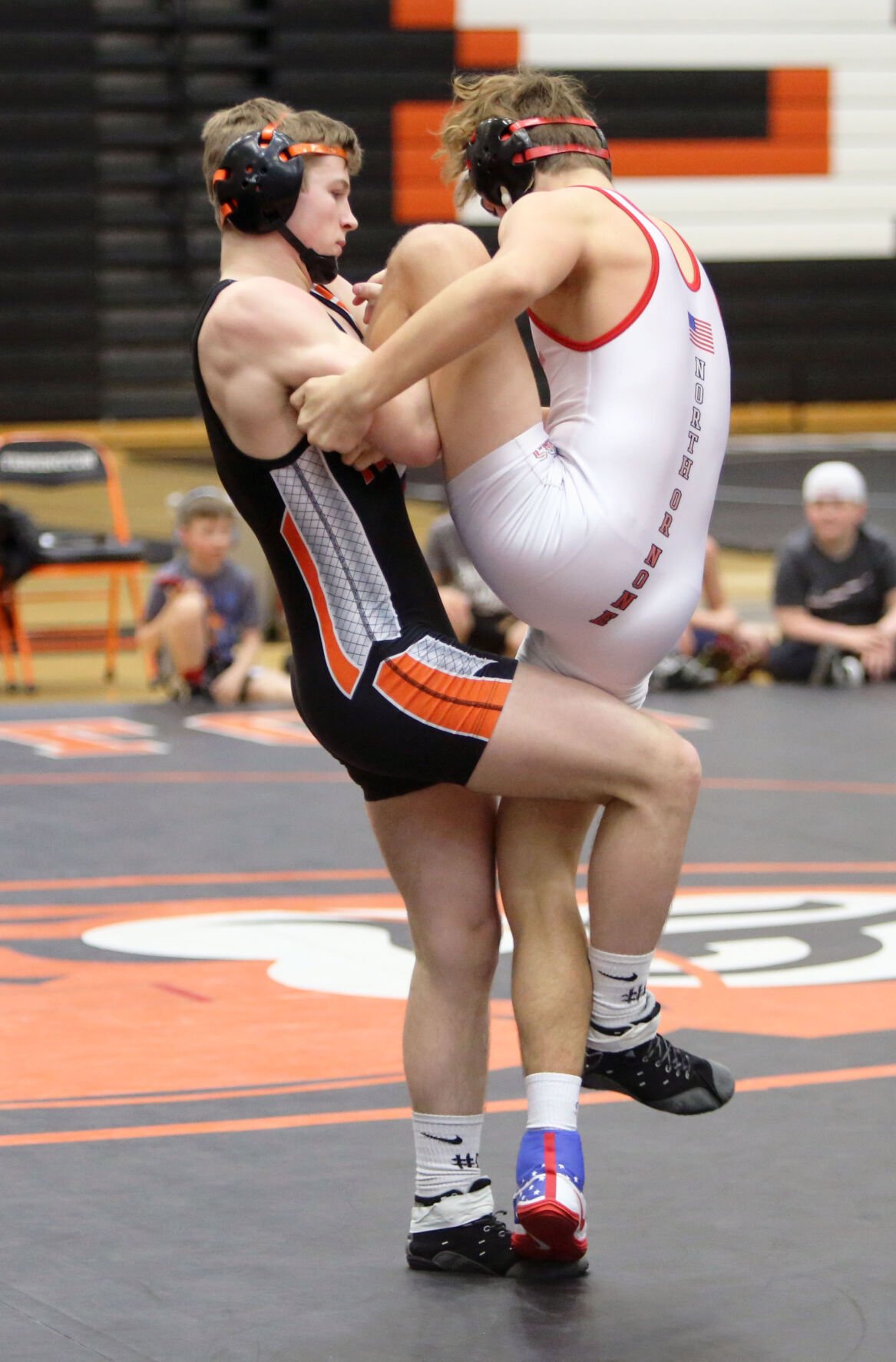 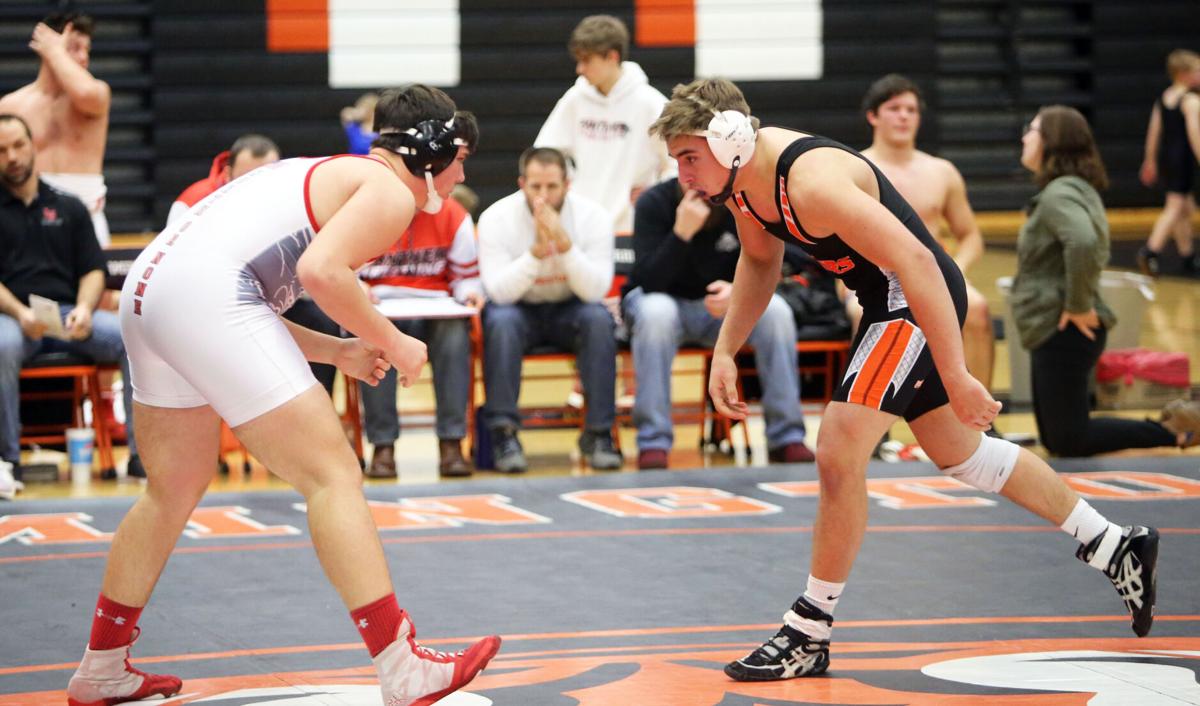 The Farmington Tiger wrestling team qualified five wrestlers for the Class AAA individual state tournament this past weekend-freshman Hunter Frost at 106 pounds, junior Luke Peterson at 145, sophomore Austin Hamel at 152, sophomore Chase Vought at 160 and junior MacAron Kukowski at195-at the Section 1AAA tournament in Rochester Feb. 22-23. It is the second state appearance for Kukowski and third for Peterson, both of whom went last winter.

As a team, the Tigers had eight wrestlers place in the top four and head coach Henry Gerten said that he, co-head coach Chad Olson and the rest of the team were very happy with everyone's performance.

"Yes, very, very happy. We always want to peak at that tournament and the guys really responded and wrestled well. Even the kids that didn't get through the weekend wrestled pretty well," he said. "Some of our younger kids had a tough time, learned some valuable lessons about how to get through the matches and compete. But our older kids did a really, really nice job. We had six legitimate chances to get through, to get guys to state and we had five."

Even though three of the five wrestlers will be at the state tournament for the first time this weekend, Gerten has expectations or goals for all of them.

"With Mac Kukowski he's the four seed and we're hoping he will wrestle up to that seed at least, but it's a tough weight class," he said. "I think with Hunter (Frost), he's got a tough draw. He's got to beat a seeded kid either in the first or second round, so experience wise it might be a tough order for him. Certainly he's got the ability to do it. With Luke Peterson, this is his third trip to the state tournament. He's wrestling great, his confidence is at an all-time high. He's got the fifth seed and like Mac we're hoping he can get after it and even improve on that seed."

"Hammy (Austin Hamel) was seeded sixth out of 16. He's got a tough kid from Apple Valley right away but if we can get by him I think that we could potentially be in the semifinals and if not get through the bracket on the consolation side," Gerten said. "At 160, Chase Vought we like where he's at and he just has to show up and wrestle and he'll be just fine. But there's no reason why he shouldn't have the expectation to place at the state tournament either."

Below are the full team results:

106: Frost was the section runner-up and went 3-1 with a bye. He beat Nick Zetah of Rochester Century by fall in the quarterfinals and Cael Robb of Owatonna by a 5-4 decision in the semifinals. He then lost in the championship match to Chase Murphy of Northfield by fall.

113: Freshman Ryan Sullivan took eighth with a record of 2-2 with two byes. He lost to Jake Messner of Northfield by fall in the quarterfinals and Ashton Macht of Owatonna by sudden victory in the third consolation round.

120: Freshman Dylan Olson finished eighth and had a record of 2-2 with two byes. He lost to Nic Cantu of Albert Lea in the quarterfinals by tech fall (17-2) and to Ian Funk of Rochester Mayo by a 3-1 decision in the third consolation round.

126: Freshman Aiden Han-Lindemyer placed eighth with a record of 2-2 with two byes. He lost to Gavin Anderson of Northfield in the quarterfinals by fall and to Benjamin Zierdt-Thorson of Rochester John Marshall by disqualification.

138: Senior Nate Engel finished fourth with a record of 4-2 with two byes. His two losses came to Derrick McMillian of Albert Lea in the quarterfinals by fall and in the third-place match by a 10-6 decision.

145: Peterson took first with three wins and a bye. He beat Luiz Gasca of Rochester Mayo by fall in the quarterfinals, Caleb Talamantes of Albert Lea in the semifinals by sudden victory and Kaden Nelson of Owatonna by a 12-0 major decision.

152: Hamel is a section champion after going 4-0 with a bye. He defeated Trevor Schroeder of Owatonna by fall in the quarterfinals, Owen Pharo of Rochester Century by a 9-2 decision in the semifinals and Griffin Studier of Albert Lea by an 8-2 decision in the championship match.

160: Vought was another section champion who went 4-0 with a bye. He beat Paxton Page of Rochester Century by fall in the quarterfinals, Kolby Olson of Northfield by fall in the semifinals and William Krueger of Rochester Mayo by a 15-7 major decision in the championship.

170. Junior Luke Weierke took third with a record of 4-1 with one bye. He beat Trevor Pomeroy of Winona-Winona-Cotter in the third-place match by a 5-2 decision. His loss came in the semifinals to Jack Stanton of Northfield by a 6-0 decision.

182: Sophomore Parker Venz finished fifth with a record of 3-2. He beat Andrew Meyer of Winona-Winona-Cotter and Angel Aguilera Lemus of Austin by fall before losing to Cade King of Owatonna by fall in the semifinals. Venz then lost to Mason Pagel of Northfield in the consolation semifinal but beat Sam Allen of Rochester Mayo by fall in the fifth-place match.

195: Kukowski won the section championship with a 4-0 record with two byes. He beat Jack Holman of Northfield by fall in the semifinals and Josh Heyda of Faribault by a 12-5 decision in the championship.

285: Junior Trevor Olson took fourth with a record of 4-2 with three byes. He lost to Zander Rusert of Winona-Winona-Cotter by fall in the quarterfinal, beat Damon Hinrichs of Rochester Mayo by fall and then fell in the third-place match to Adam Vlasaty of Austin by sudden victory.