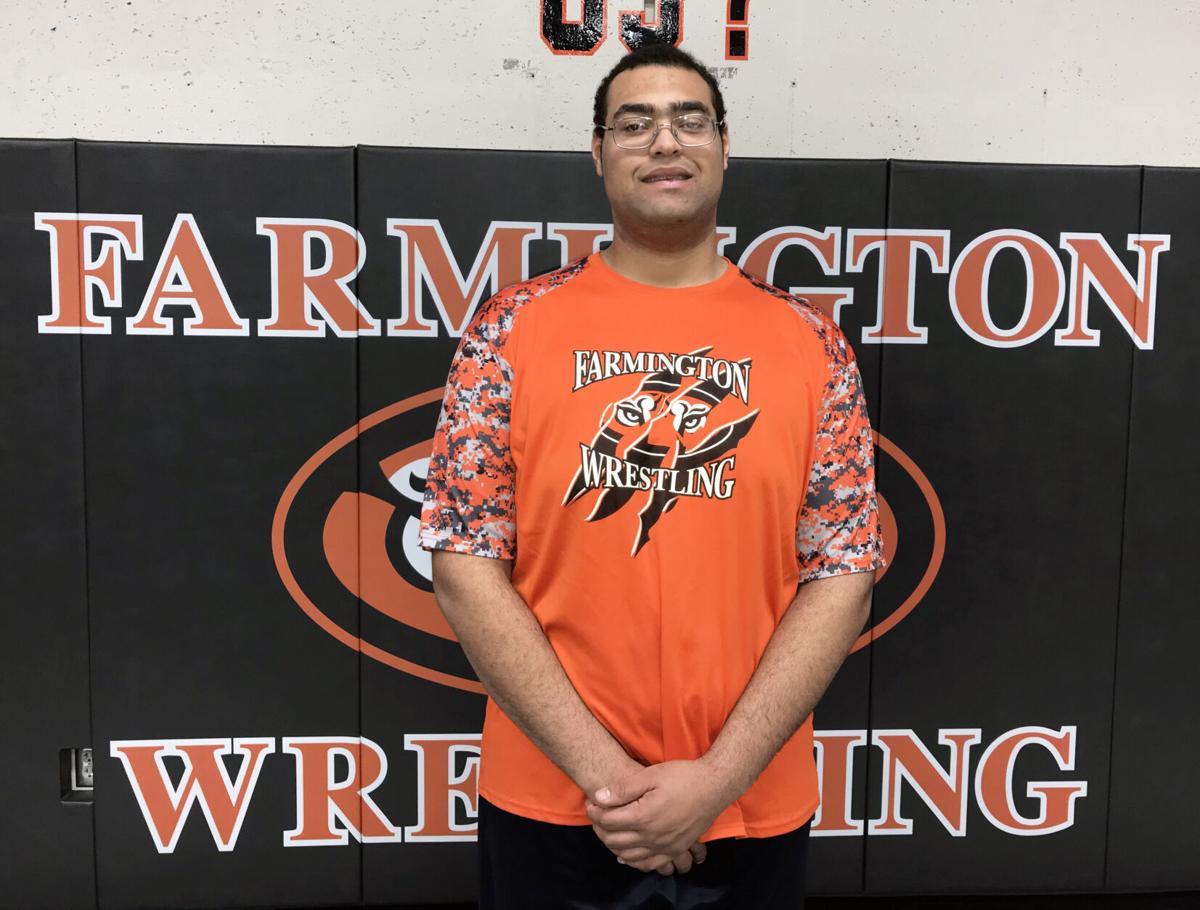 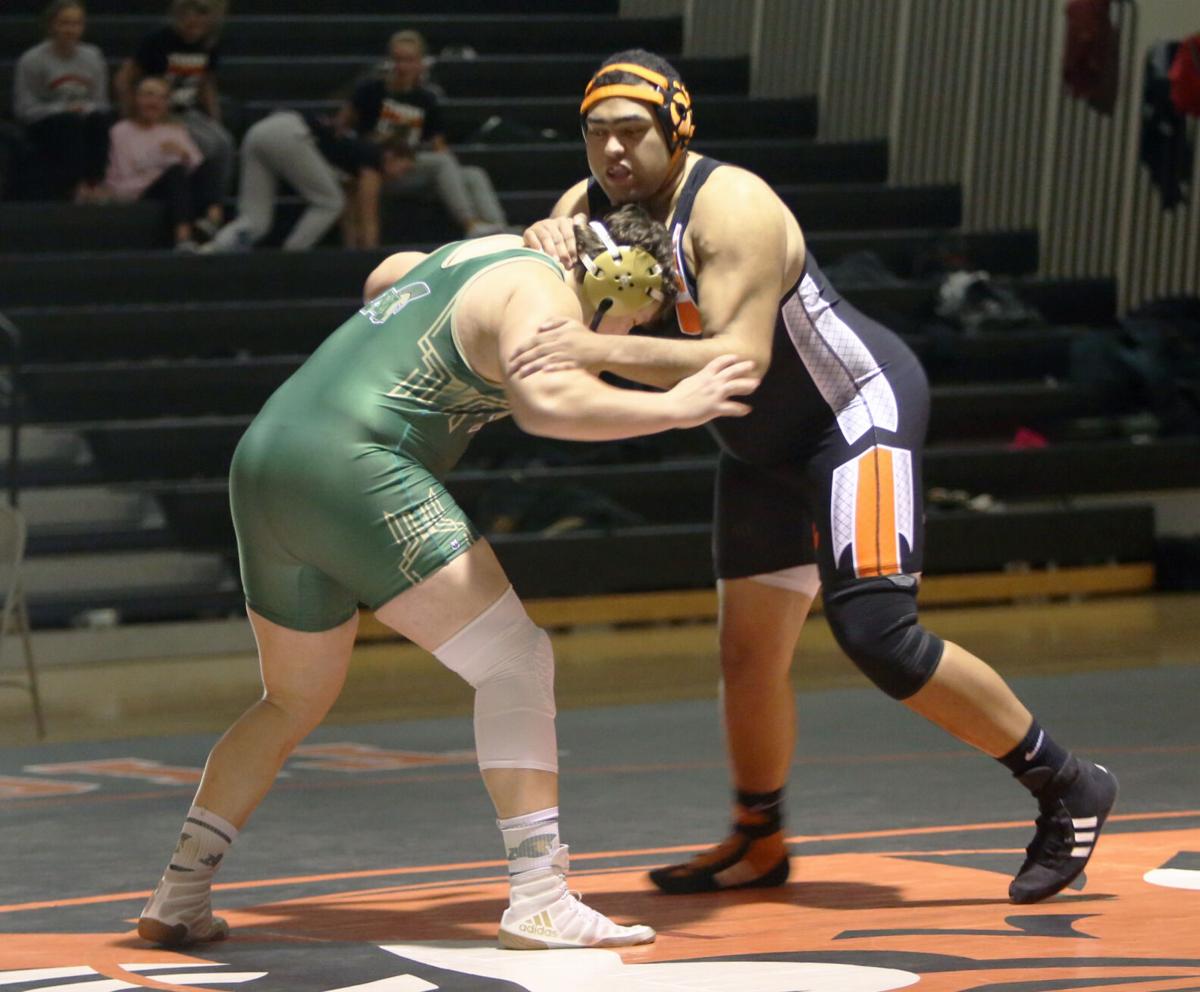 While the Farmington Tigers wrestling team had a great deal of success this season, one individuals' biggest accomplishment came off of the mat. Over the past two years, senior Matt Clark has embodied the Tigers' mission to develop young men not only as wrestlers, but off the mat as well.

When Clark first joined the team, he weighed 375 pounds, 90 pounds away from being able to make weight at the 285-pound weight class. But over the course of his junior and senior years, Clark persevered and lost the necessary weight. And toward the end of this last season, he wrestled his first official varsity match.

After a disastrous start, wrestling almost did not even happen for Clark. He said some teachers managed to convince him to try wrestling, and even though he was reluctant, he gave it a shot his sophomore year. Clark decided it wasn't for him.

But he came back his junior year, stuck it out, got down to about 325 pounds and then returned this winter for his senior season at about 350. Co-head coach Henry Gerten has been there for all of it, and admitted he did not have a whole lot of faith that Clark would make it at first, but the senior eventually proved him wrong.

"When he first walked into our room, he physically could not make it through a practice. He tried the first practice he was here and 10 or 20 minutes into it, he said this is not for me," Gerten said. "And when he came, he had a PSA helper with him named Derek, who is a friend of the program, and we tried to get him to stay. But he was like, 'I'm not doing this.' He weighed 370 when he showed up, he was unhealthy and it wasn't great. Both coach Chad (Olson) and I looked at him and we didn't have much faith, to be fair.

"The next year comes, and now he's a junior. He comes, and at this point when he shows up he doesn't have the respect of the guys, either. Slowly but surely through last year, Matthew started to grow up, he started to understand what our program was about, our mission, our purpose. That it wasn't winning, it was about building people (and) how can you better yourself. He started to listen when it came to pushing yourself through hard situations, when it came to eating healthy choices, when it came to just getting past that 'oh it hurts a little bit.' That's physically, mentally and nutritionally."

A long road to make weight

On top of wrestling, Clark played football in the fall. And while he said that the wrestling practices were plenty of exercise to help him lose the weight, the hardest part was figuring out his diet.

"I kept changing my diet a lot, too. I was trying to figure out what was going to work and what wasn't going to work. Now, this year, I found what would actually work," Clark said. "Eat, like, chicken breasts, two eggs in the morning, a thing of fruit and water. Cut dairy out of my diet and that mostly worked. Eat salads all the time. It took a while to get used to it."

After losing quite a bit of weight his junior year, Clark gained some of it back and started the 2018 football season at 350 pounds. However, he steadily started losing weight again this season, and Gerten said he also continued to earn the respect of the rest of the team with his work ethic.

"By the end of last year he was wrestling exhibition and slowly earning the respect of the team. When he would get a win, or even a match, we were excited because a lot of times there wasn't a guy for him. They were so excited when he won, or when he lost he was giving a great effort, better effort on the mat than he did in practice last year," Gerten said.

Clark said he first started to realize he could make weight as he approached the 300-pound mark, and that as he drew closer, he received an outpouring of support.

"I think when I was around 303 is when I started (to realize it)," Clark said. "I knew I had to change some of my diet and pick it up more, see where it went. My football buddies have been asking every day 'are you there yet, are you there yet?' Then, when they all found out, I have a friend who goes to (the University of Wisconsin) Stout now, he wrestled for Farmington, Luke Kriesel, he texted his mom 'Mom, Matt made weight, Matt made weight!' Last week I had parents coming up to me, I didn't know who they were, to tell me congratulations."

Clark said his fondest memory of wrestling was the day he made weight.

"Just making weight for the first time. I came to practice one Friday and I came in at 298 and I got down more during practice. I got down to 293 that Friday and coach was like, 'you can make weight at 287!' Coach (Andrew) Paul and me talked and he was like 'drink a little bit of water during the night and eat a small salad,'" Clark said. "I did that, and then I kept getting cramps so I was drinking more water, and I thought that was going to spike my weight up more, just the water weight. Then I got here and checked my weight before we left (to wrestle that weekend) and I was right on the dot. That is one of my favorite memories, having that and knowing I made varsity heavyweight."

Gerten saw first-hand the reaction when Clark made weight that morning.

"So, we're wrestling him exhibition, people are getting on him, and I'll never forget this. It's Feb. 2, so we're wrestling in Janesville, all of our guys are going different places. I was going with varsity and he was going along with. It's six in the morning and all the guys start getting all excited, I was like 'what?' and they said 'Clark made weight!'" Gerten said. "I looked at the scale and he was on and everyone is so excited and he was just beaming, he had been working to make that goal. He made the weight, it was so cool, he got to wrestle officially on our roster."

Clark making weight when he did also allowed him enough time to make weight enough times to qualify for the sections team and individual rosters.

The day he made weight, he went 5-0 at junior varsity duals at Zumbrota-Mazeppa on Feb. 2. Then, on Feb. 14, Clark wrestled his first varsity heavyweight match in Farmington's section dual win over Rochester Mayo.

Those who helped along the way

Clark has received a lot of support from his teammates, coaches and friends during the last two years, but he said he could not have done it without his family.

"A lot of ways, a lot of ways. My mom's helped me a lot, my aunt, my other aunt, my step dad and my real dad, they all helped me, they all got me through it," Clark said. "They knew I was going to be cranky from time to time not having the food I want. They got me there. I think my whole family was shocked I did it."

Gerten talked about how far Clark has come from that very first practice his sophomore year and starting up again at the start of his junior season.

"He's part of the team, the guys respect him. He's still a kid, he's still a goofball, says dumb things sometimes, but when you look out you don't see Clark and everybody else, you see him part of the team. It's emotional because it's cool, this is what we're about," Gerten said. "I want to win, I'm super competitive. But I also want that kid to be successful when he leaves here. This might give him some hope, you did this, you came all the way down and you lost all this weight and now go attack whatever job or whatever college you want to go to, attack your grades the same way and open some doors for yourself."

What's next for Clark as he finishes his senior year and moves on from Farmington High School?

"I might play baseball, still working that out, might play baseball this year and all that. If that don't work, I might just go to strictly just lifting," Clark said. "I might play football in college or I might wrestle in college. One of those two I might do. Just keep going, see how far I can get to a different weight, wherever it brings me to."