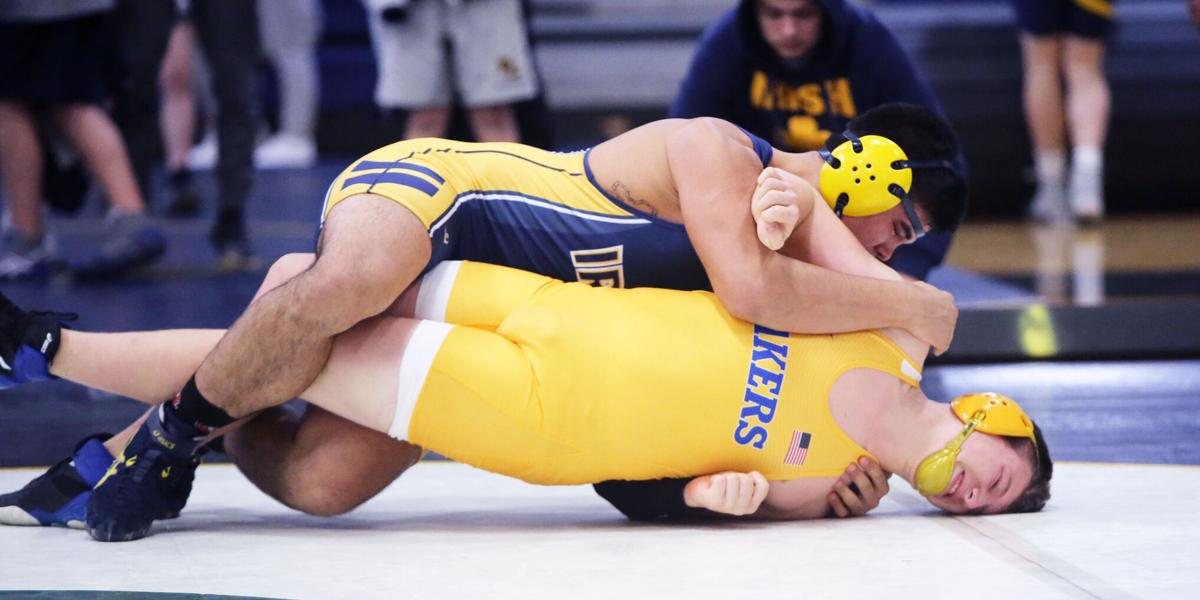 Rosemount High School hosted the Section 2AAA individual wrestling tournament Friday and Saturday, Feb. 22-23, and saw two of its wrestlers advance to the state tournament-senior Ezayah Oropeza at 220 pounds for the second-straight year and fellow senior Zach Young at 182 in his first trip to state. Oropeza was the section champion for a second time and returns to the state tournament where he finished as the runner-up last winter in the same weight class. Young placed second in his weight class to advance. As a team, The Irish had four wrestlers place in the top four-freshman Tony Byersdorfer, Young, Oropeza and senior Max Otterdahl. The Class AAA state individual tournament is Friday and Saturday, March 1-2, at the Xcel Energy Center.

Young said a lot went through his head when he realized he was moving on to the state tournament.

With it being his second time advancing, Oropeza said it almost felt expected.

"Well being ranked No. 1 (in the state at 220 pounds) all year, making it to state doesn't seem like a big accomplishment compared to last year, but it still feels great to win a section title," he said.

Oropeza also said that he felt more more pressure to make sure he made state due to his ranking.

Heading into the state tournament, Young said that he's looking forward to the experience of the state tournament and the atmosphere, but also that he has the goal of making the podium. Oropeza said that since he's been there before, this year he feels more prepared and mentally ready for the experience. Both finished by saying that on top of improving physically, perhaps the biggest difference over the past year has been how they have become more mentally tough.

Below are the full results for Rosemount:

113: Junior Johnny Thai took sixth with a record of 3-3 with two byes. His win came in the third consolation round when he beat Landon Vath of Eastview by fall in 3 minutes, 59 seconds.

120: Freshman Konner Werk finished fifth with a 4-2 record including a bye. He beat Xavier Ripplinger of Burnsville by sudden victory in the fifth-place match, his second overtime match of the tournament.

138: Senior Carlos Thomas placed eighth and went 2-2 with two byes. Thomas lost in the quarterfinal to Brice Bischof of Lakeville South by fall and to Cole Edwards of Prior Lake in the third consolation round by fall.

145: Sophomore Ezra Horn took eighth with an 2-2 record and two byes. He lost to Brady Gross of Apple Valley by fall in the quarterfinal and to Nathan Langer of Eastview by an 11-4 decision.

152: Byersdorfer finished fourth with a 3-2 record including a bye. He beat Gavin Roy of Lakeville North in the quarterfinal via sudden victory and Scott Gray of Prior Lake by an 8-7 decision in the consolation semifinal. Byersdorfer lost to DJ Smith of Shakopee in the third-place match by fall.

170: Junior Fatih Shigidy placed fifth and had a record of 4-2 with two byes. His two wins came in the third consolation round against Enrique Merli of Lakeville North by fall in 2:13 and Carson Manville of Shakopee by injury default in the fifth-place match.

182: Young took second with a record of 3-1 including a bye. He defeated Ryan Mudgett of Lakeville North in the quarterfinal by a 7-3 decision and Jake Trachte of New Prague by a 1-0 decision in the semifinal. In the championship match, he lost to Jack Casey of Shakopee by a 10-6 decision.

195: Sophomore Haydyn Rehder finished eighth with a record of 2-2 including two byes. In the quarterfinal he lost to Joey Johnson of Shakopee by fall and then in the third consolation round he fell to Brady Redenbaugh of Lakeville North by fall as well.

220: Oropeza went undefeated in four matches including a bye. He beat Devon Spencer of Burnsville, Tony Anger of Apple Valley and Tommy Johnson of Shakopee all by fall within the first two periods.

285: Otterdahl finished third with a record of 4-1 including two byes. He beat Elliott Bratsch of Lakeville South by fall in the quarterfinals, lost to Tyler Kim of Apple Valley in the semifinals by fall, defeated Evan Anderson of New Prague by fall in the third consolation round and then beat Jade Trelstad of Shakopee by fall in the third-place match.