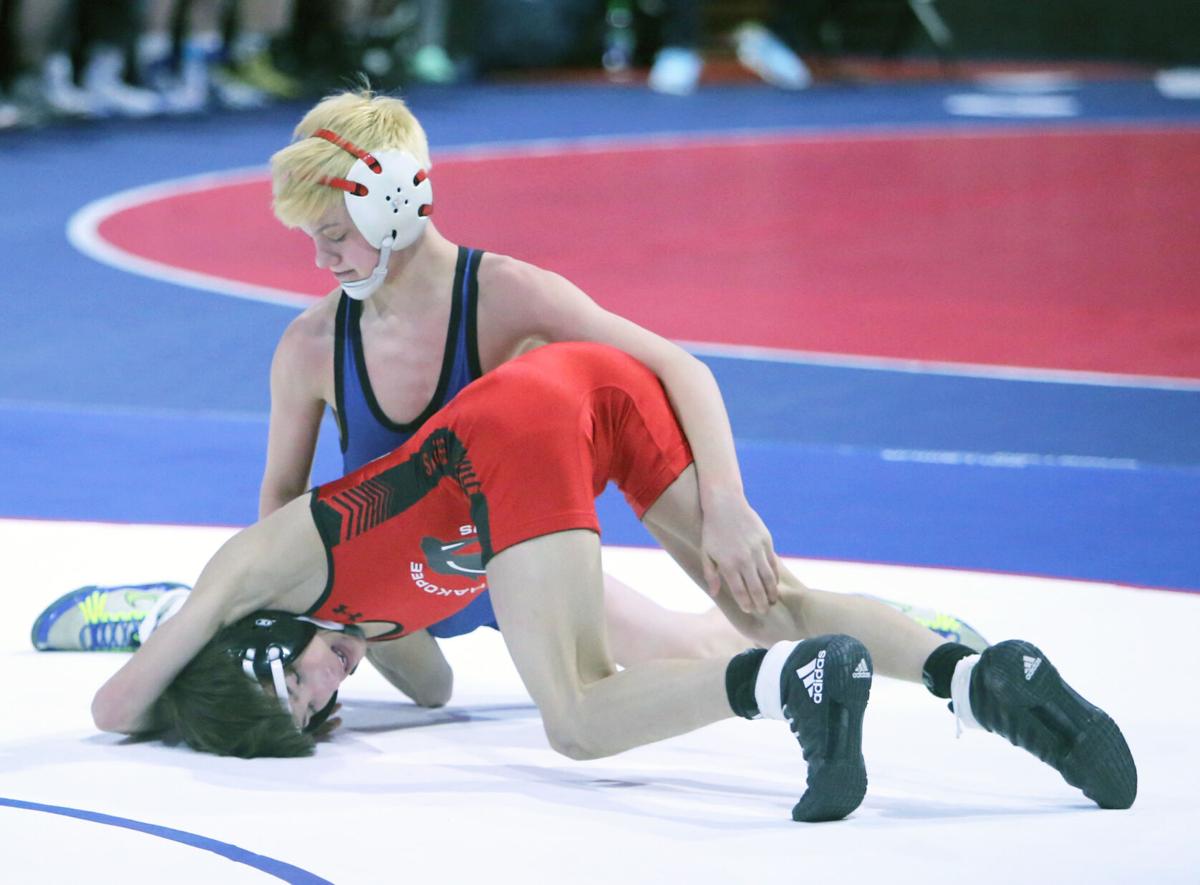 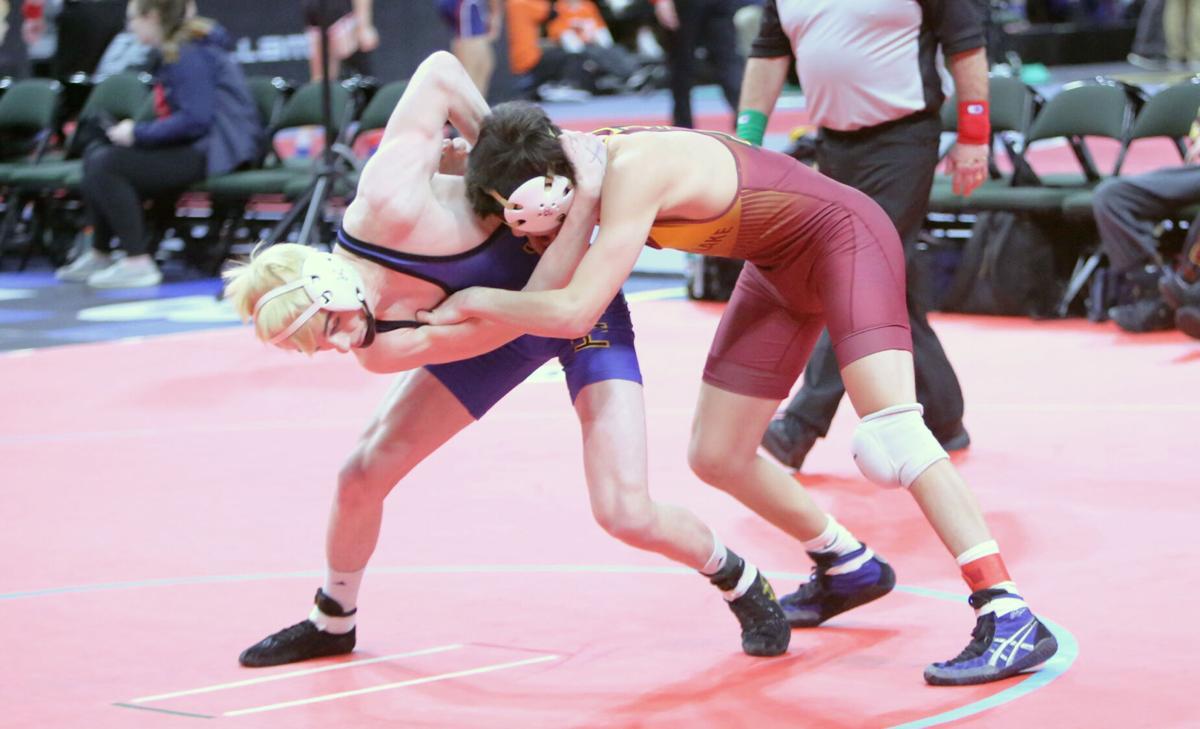 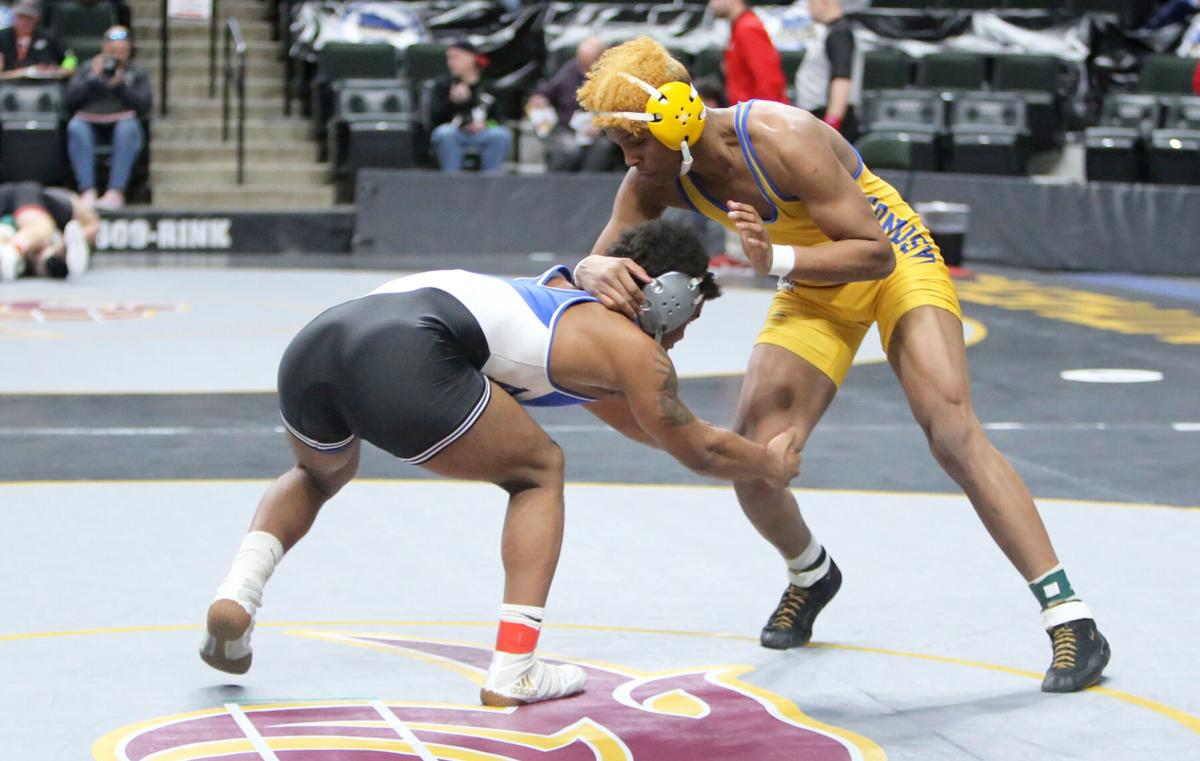 When the pairings came out for the first round of the Class AAA team state wrestling tournament and Hastings drew No. 1-ranked Shakopee, it was bound to be rough sledding for the Raiders. However, it was jarring how good the Sabres actually were, cruising past the Raiders 75-6.

Hastings’ lone points came at 285 pounds when senior Brady Schiller received a forfeit. Otherwise, the Raiders lost 11 of the other 13 matches by fall, all but one coming in the first two periods. Senior Justin Tverberg had Hastings’ best showing at 195 where he lost by a 10-0 major decision. Freshman Josh Route lost by a 17-2 tech fall at 120.

“We came into this day knowing that all 19 kids on our roster were going to get to see the mat, which is huge,” said head coach Tim Haneberg about putting some kids out there against Shakopee that normally would not have been in the lineup. “We have a lot of underclassmen as well, every kid on our team got to experience and wrestle at the state tournament. We got all 19 kids out there which was really cool, it was kind of our goal from the beginning as well.”

The Raiders had a much better showing in the consolation semifinals against No. 5 -seeded Forest Lake, but in the end the Rangers were too much for Hastings to handle. The Raiders fell to Forest Lake 39-20 to go 0-2 at team state and end their dual meet season.

“It was a similar score almost, the point margin was pretty similar, I think we lost 45-27 before. So it was pretty close, we thought a couple of things in that dual could have gone our way,” Haneberg said about the dual against Forest Lake, who they lost to earlier in the season. “We thought we could have gotten a 7-7 (match wins) split but it ended up being a 8-6 split for the matches. There was one at 120 we thought we could have won and that turned out to be a close (loss) match and there were some others in there we thought could be close as well and just didn’t work out.”

Hastings got their first win of team state – not including the forfeit Brady Schiller received against Shakopee at 285 – when senior John Kendall won at 138 with a 13-5 major decision. However, at that point Hastings already trailed 25-0 after losing four of the first five matches and forfeiting at 126.

“We wrestled a close match earlier this year with Aiden (Erickson) against their 132-pounder, so instead of wrestling their stud (Derrick Cardinal at 126) we thought we could get a better matchup but it didn’t really work out in our favor, we ended up give up a forfeit and a pin there,” Haneberg said about forfeiting at 126 and moving Erickson up a weight class.

After Kendall, junior Nolan Myers continued the momentum with a 7-0 decision over the Rangers’ Mark Rendl at 145 and it seemed like the Raiders might be able to start a comeback down 25-7. However, Hastings lost the next two matches and trailed 35-7 heading into the match at 170. They needed pins in the last five matches to win the dual, but that’s a difficult feat even against the weakest of opponents, let alone in a state tournament.

Senior Garrett Beying, Tverberg and junior Isaac Fritz won the next three matches but were unable to get pins, which put the dual out of reach. Beying and Tverberg each got decisions while Fritz won by a 10-2 major decision. Schiller ended his prep career with a 14-4 major decision loss at 220 and senior Cameron Olsen capped off the dual with a 5-0 win.

The Raiders continued to take their lumps on Friday during individual state. Seven wrestlers competed for Hastings that day but went 0-7 in their first round matches.

This ends the season for the Raiders, who will lose several seniors including Kendall, Ali, Beying, Tverberg, Schiller and Olsen. Hastings returned to team state after a year’s absence under Haneberg in his first year as head coach. It was the sixth time the Raiders wrestled at team state in the past decade and the fourth in five years.

Mukhtar Ali gets the takedown at 160 pounds in Class AAA but loses 5-4 for @hastingswrestle pic.twitter.com/WbdhrsXW8g

Garrett Beying fights off his first-round opponent from Osseo at 170 pounds in Class AAA for @hastingswrestle pic.twitter.com/r7rwAXZX3K