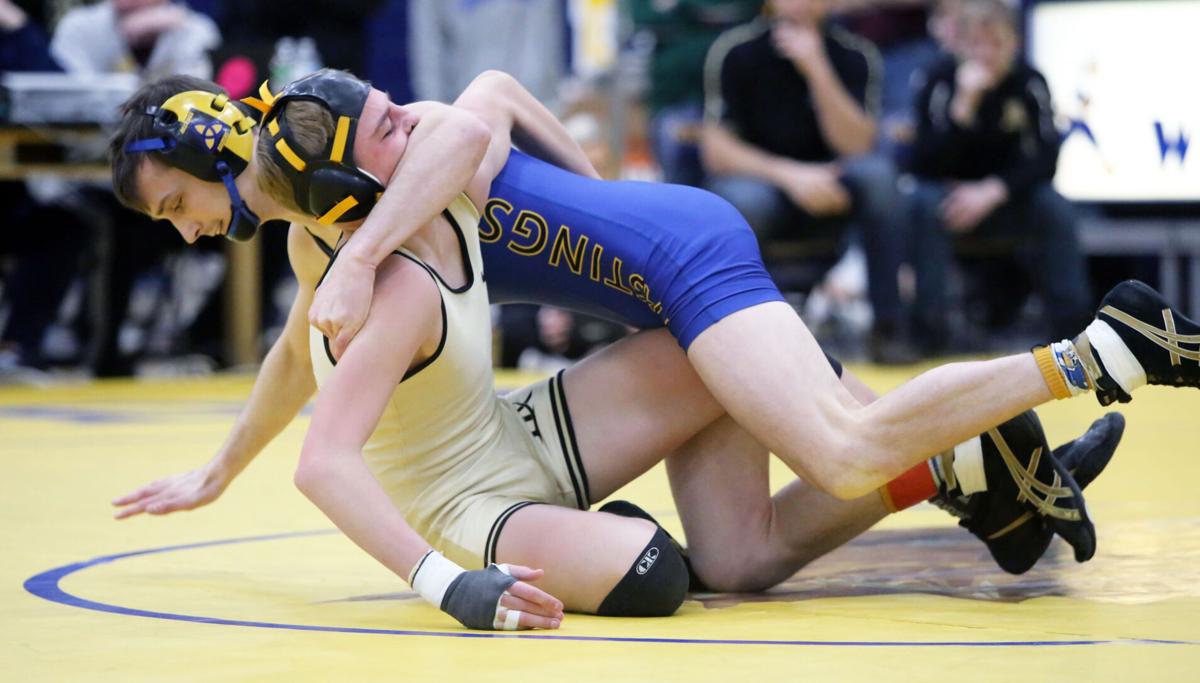 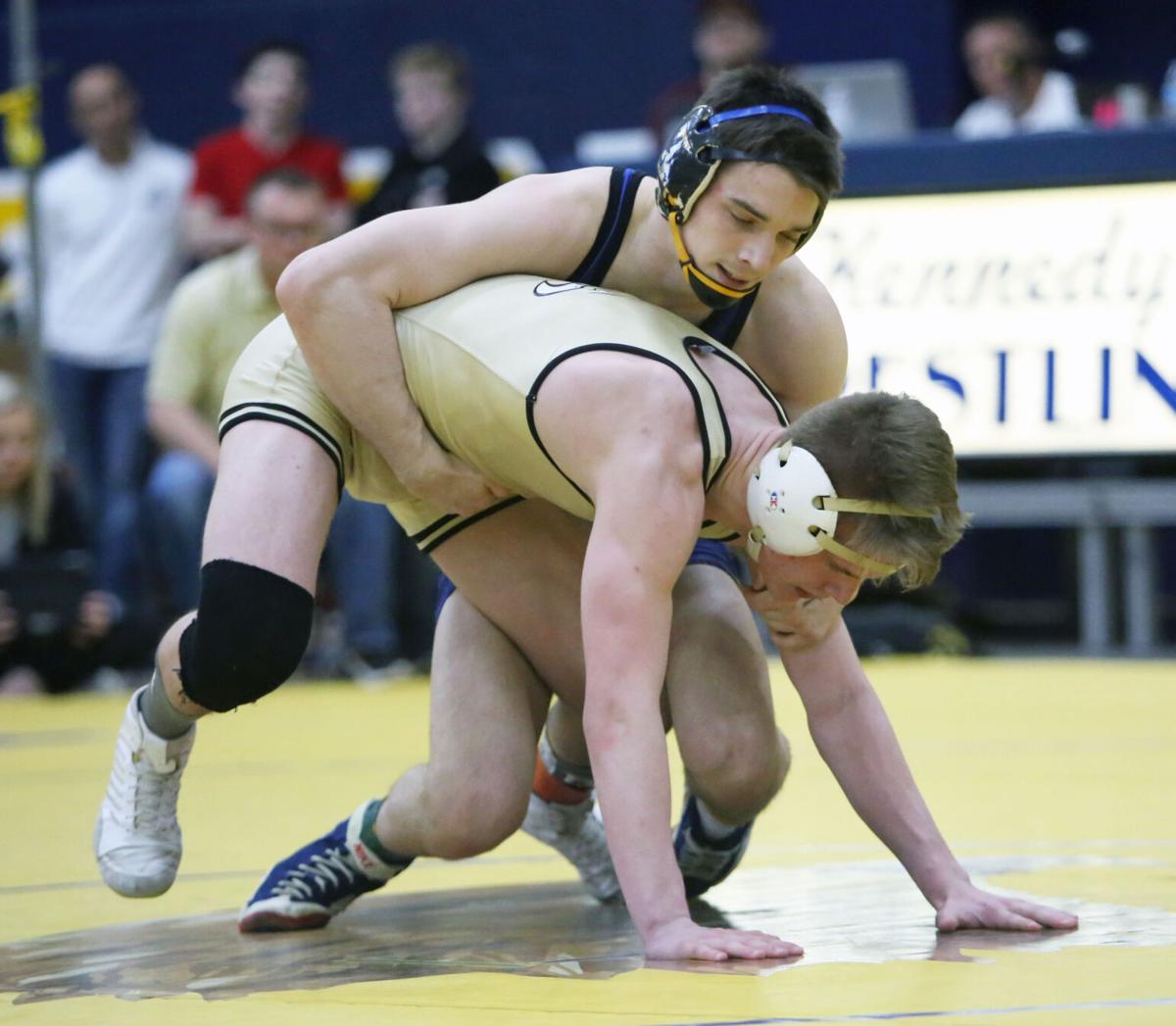 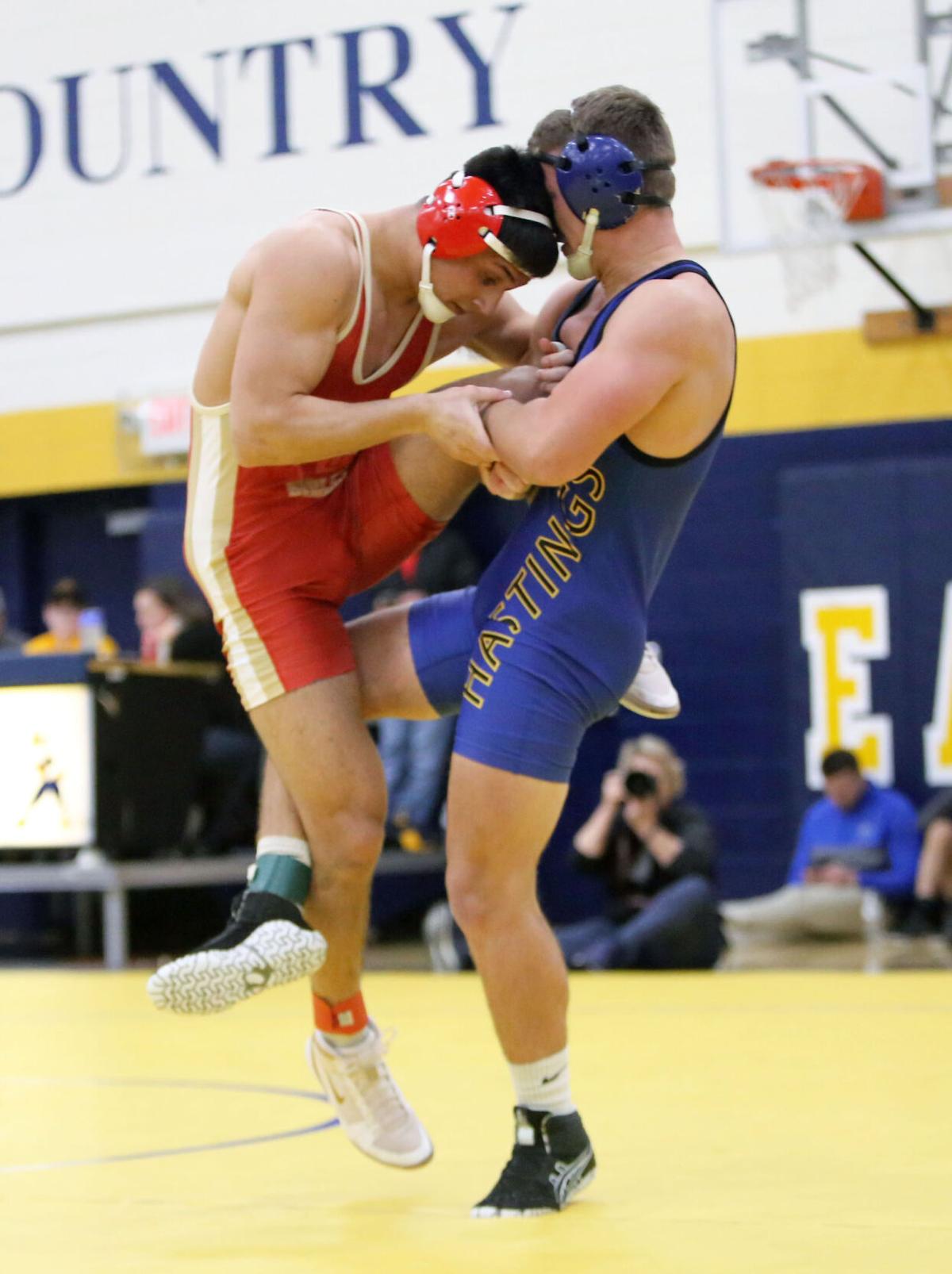 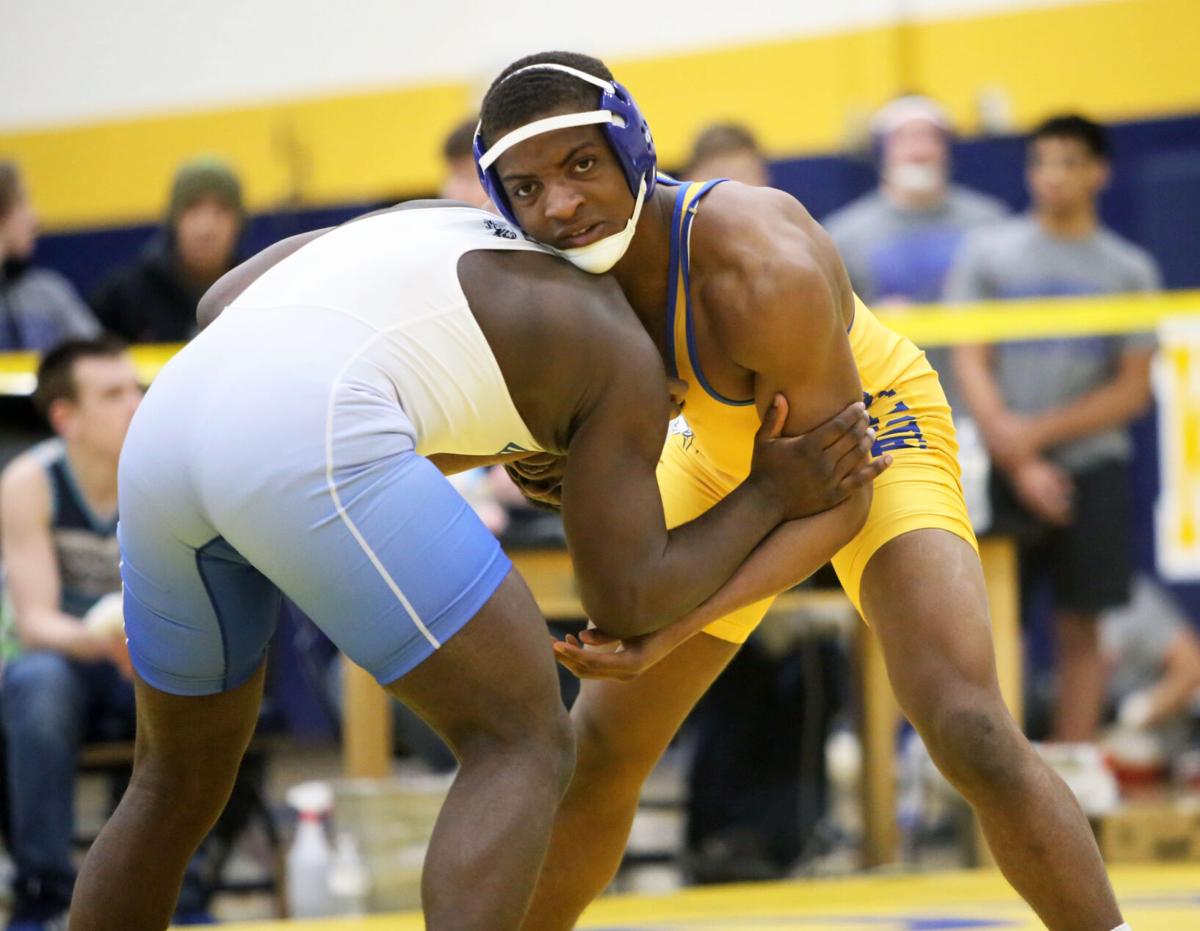 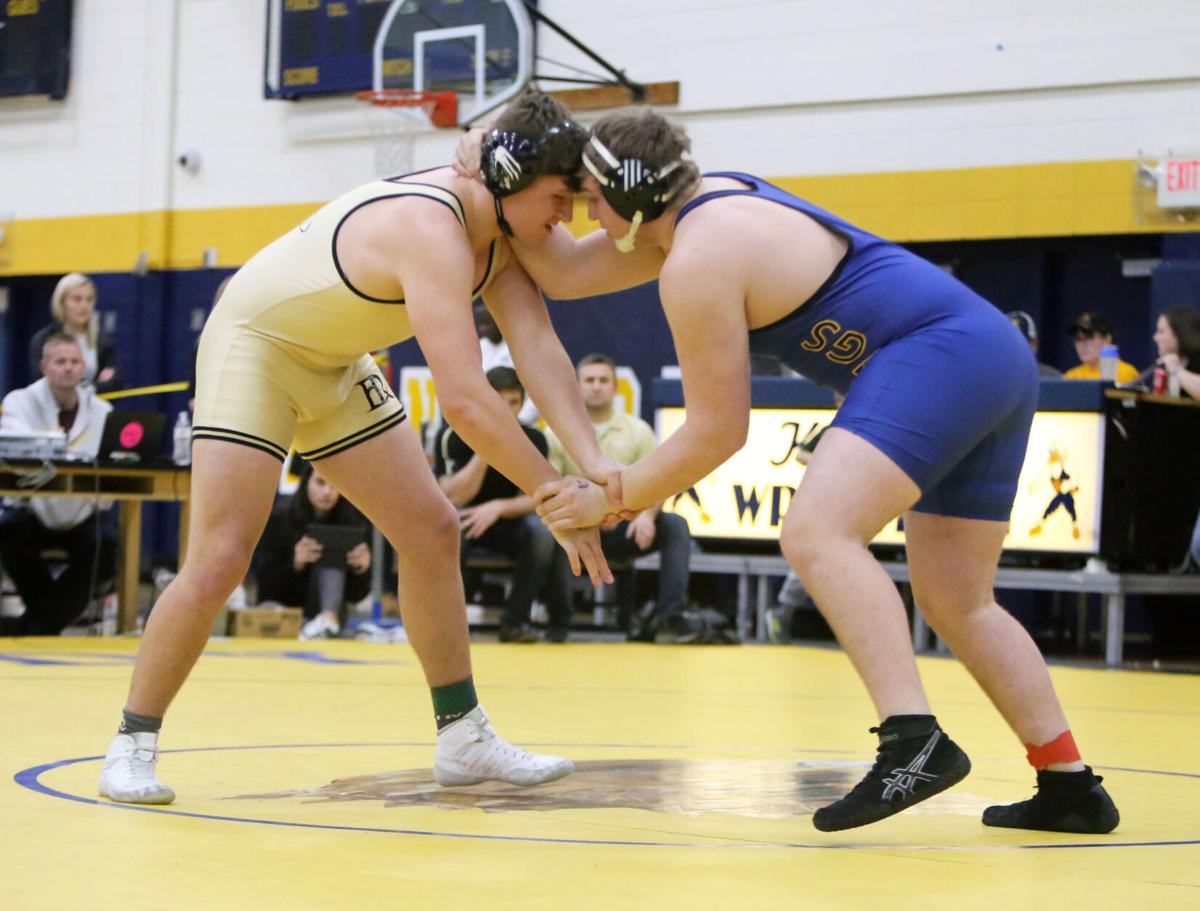 Hastings is sending six entrants to the individual state wrestling meet next week after once again dominating at the Section 3AAA individual section meet at Bloomington Kennedy High School.

Those qualifying for state are seniors Matt Myers (120 pounds), Lynden Wilson (126), Mac Wilson (152), Alex O'Connor (170), Godswill Pepple (195) and Luke Chamberlain (285). Every single Raider wrestler placed at the conclusion of the two-day meet, and all but one finished in fourth-place or better.

"We had six seeded in the top two, so that's what we got," head coach Josh McLay said after the meet. "You always have hopes and dreams that you can get more, but it's tough. We had some kids with opportunities to get through, just didn't work out."

Hastings sent eight individuals last season, and of this year's entrants, three of them are returners who went last year-Mac Wilson, O'Connor and Chamberlain. It is the first trip to individual state for Myers. Lynden Wilson and Pepple.

The individual state tournament is held at the Xcel Energy Center Friday and Saturday, March 1-2. McLay said that the team's preparation for state will stay the same as what they've done the past few weeks.

"These last couple weeks looked pretty similar," he said. "We keep the practices short, just trying to make sure their bodies are in the right spot and they're just blowing out their lungs in practice. We have short practices to keep them fresh."

The Raiders had two Section 3AAA champions-Lynden Wilson and O'Connor who both went 3-0, and with O'Connor mixing in a first-round bye.

Wilson won by tech fall in his first match against Payton Weber-Rolfes of Henry Sibley, pinned Austin Kaline of Eagan in his semifinal match and then won by a 12-0 major decision over Vito Massa of East Ridge in the 126-pound championship match.

Meanwhile, after his bye, O'Connor beat Xixu Vue of St. Paul Harding by fall in the quarterfinals, a 5-1 decision over Edric Waindim of Park in the semifinals and then beat Levi French-Amara of Henry Sibley in the championship match with a 6-4 decision.

The other four Hastings qualifiers were runners-up. Myers beat Wai Wai eh of St. Paul Central by fall in the quarterfinal and Allan Everson of Bloomington Kennedy by a 7-4 decision in the semifinals before losing to Cole West of Woodbury by fall in the championship.

Mac Wilson received a first-round bye, beat Evan Haldeman of St. Paul Central by a 9-2 decision in the quarterfinals, defeated Joe Jeans of Bloomington Kennedy by tech fall in the semifinals before losing to Roman Rogotzke of East Ridge by a 12-5 decision in the championship.

Pepple won by fall in the quarterfinals against Guy Brufoldt of East Ridge, defeated Krystiyan Mullen of Park by a 17-4 major decision in the semifinals and then lost to Donald Nde of Woodbury in the championship match by an 8-3 decision.

Finally, Chamberlain beat Valiant Taylor of Bloomington Kennedy by fall in the quarterfinals, overcame Diego Villeda of Eagan in the semifinals with a 4-2 decision but then lost to Marco Cavallaro of East Ridge in the championship by fall.

Eighth-grader Josh Route took fourth at 106. He won by a 13-5 major decision in the quarterfinals over Koua Thao of St. Paul Harding, lost to Matt Hogue of East Ridge in the semifinals by tech fall, beat Thomas Chandler of Henry Sibley by fall in the consolation semifinal and then lost in the third-place match to Alex Braun of Woodbury by a 9-6 decision.

Fellow eighth-grader Aiden Erickson placed third at 113. Erickson received a first-round bye, was victorious over Ibrahim Alou of Bloomington Kennedy by fall in the quarterfinals but then lost to Johnny LaCore of East Ridge in the semifinals by a 13-11 decision. He then won his consolation semifinal match against Antonio Rizzo of Woodbury by an 11-9 decision and took third with a 9-4 decision over Sahloa Eh of St. Paul Harding.

Senior Jesse Mimbach took fourth at 132 with a record of 3-2 with a bye. After his first-round bye, Mimbach won by fall in the quarterfinals over John Wallace of St. Paul Central. In the semifinals, he lost to Ryder Rogotzke of East Ridge by an 8-6 decision but then beat Maxwell Fronda of Cretin-Derham Hall by fall in the consolation semifinal. In the third-place match, he fell to Brady Moesethin of Woodbury by a 9-7 decision.

Junior John Kendall finished third at 138. He beat Enock Moindi of Henry Sibley by fall in the quarterfinals, lost to Andrew Wick of Eagan in the semifinals by a 6-2 decision, was victorious over Jeff McDonald of Bloomington Kennedy by a 13-0 major decision in the consolation semifinal and then beat Cade Johnson of Woodbury for third-place by fall.

Senior Paul Kendall took fourth in the 145-pound weight class. In the first round he received a bye and then beat Billy Reineccius of Bloomington Kennedy by fall. For the semifinal, Kendall lost to Royce Hogue of East Ridge by fall and then beat Edmundo Villalva Lijo of Cretin-Derham Hall in the consolation semifinal by a fall. In the third-place match, he lost to Solomon Lankow of Park by a 9-1 major decision.

Sophomore Isaac Fritz took sixth place at 160 taking an injured Corbin Leflay's spot in the lineup. Fritz beat Jackson Cercioglu of Henry Sibley by fall in the first round lost to Isaac Grams of Bloomington Kennedy in the quarterfinals by fall. He then won his next two consolation matches against Sam Ruiz of Park by tech fall and Guleed Hirmoge of St. Paul Harding by fall. In the consolation semifinals he lost to Adrian Shanahan of St. Paul Central by an 11-4 decision and then fell in the fifth-place match to Noah Kipp of Eagan by fall.

At 182, junior Mukhtar Ali took third. He beat Riley O'Neill of Bloomington Kennedy by fall in the quarterfinal but then lost to Ahmed Abdelal of Woodbury in the semifinals by a 13-5 major decision. Ali beat Ethan Lowe of Henry Sibley in the consolation semifinal by a 7-4 decision and then Noah Johnson of Park in the third-place match by sudden victory in overtime.

McLay singled out junior Brady Schiller, who took third at 220, for how far he has come as a wrestler. Schiller took third after having a chance at a wrestle-back to take second and move on to state.

"I'm proud of Brady Schiller for doing as well as he did. Even having the opportunity here to go to state is huge for him," McLay said. "As a freshman, gosh I didn't think he would make it through the year, let alone two years later having the shot, wrestling in a match to go to state. It's a pretty cool deal."

Schiller won his quarterfinal match over Jaxon Reichenberger-Cooper from Bloomington Kennedy by fall before falling to Antonio Davis of Park in the semifinals by a 20-10 major decision. He won the consolation semifinal match against Shemmoud Boone of Henry Sibley by fall and was victorious in the third-place match with another pin of Reichenberger-Cooper. In his wrestleback for second, Schiller lost to Mason Barrows of Woodbury by an 11-5 decision.