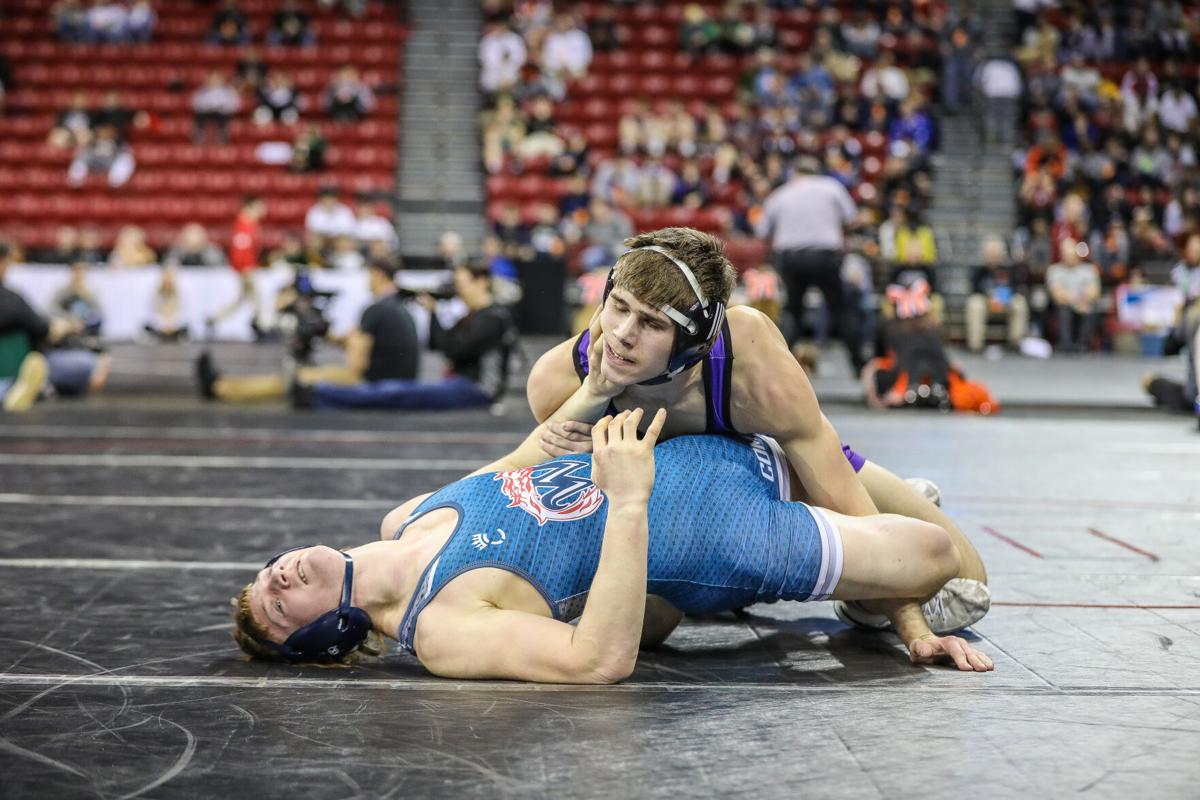 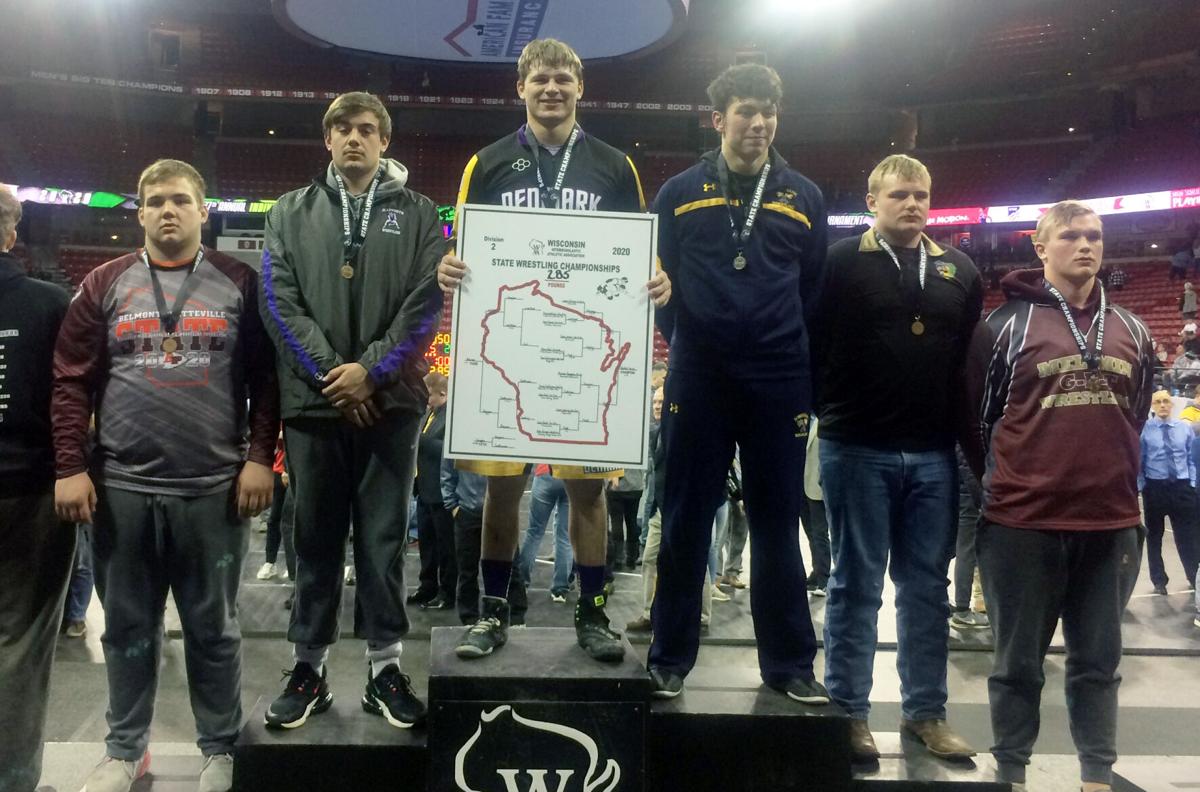 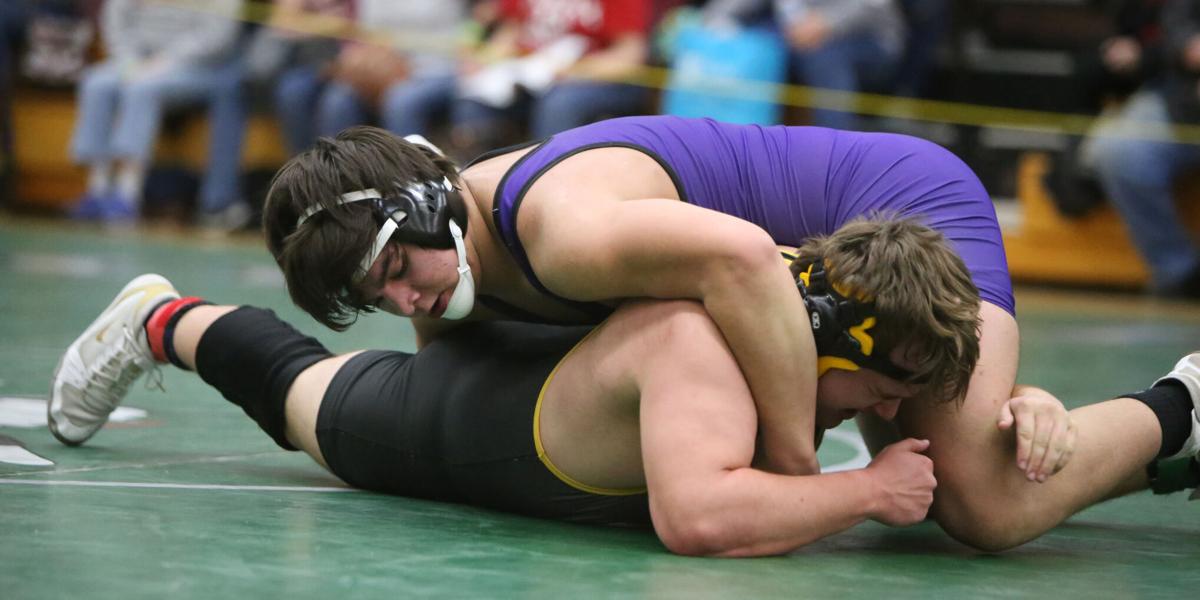 Stuhl was the runner-up at 138 pounds after taking third at 132 last season. It was his third time on the podium after finishing second at 106 as a freshman.. This was Peterson’s second trip to individual state. In 2019 he took fifth at 285.

Stuhl (40-3) won by a 15-0 tech fall over Colby Bernhardt (35-12) of Waupaca in the championship quarterfinals after receiving a first-round bye. In the semifinals, he was victorious over then-undefeated Jessie Tijerina (47-1) of Portage by a 3-2 decision. Going for his first state championship, Stuhl fell to Matty Bianchi (45-2) of Two Rivers by a 3-1 decision to take second.

“Charlie wrestled really good. He got a tech fall in his first match and his second match he beat a very worthy opponent who had won the Bi-State and was undefeated,” said Ellsworth head coach Mark Matzek about Stuhl’s state tournament performance. “He wrestled a very smart match and it was one of the best matches he wrestled all year. In the finals, came up a little short, the guy had a little bit more firepower than we did. His only three losses this year came to three state champions.”

“I think that I wrestled the best I’ve wrestled all season this weekend, however I want to continue to get better for college wrestling,” Stuhl said. “It was special to me because it was the last time I got to represent Ellsworth in an Ellsworth wrestling singlet.”

Matzek agreed that Stuhl was peaking at the right time and his experience showed.

“Yep he was peaking and he had his head screwed on correctly,” Matzek said. “He wrestled like a senior should.”

After taking third at 132 last year, Stuhl said he made several improvements over the course of this season.

“One major one was that I felt confident attacking in big matches such as my state semifinal. Another thing that I improved on was wrestling on the edge of the mat,” he said. “I am thankful to have an amazing coaching staff that could break down my matches and help me improve on little things. I was in the state finals twice in my career but I definitely think this year was earned more than my freshman year.”

Peterson (40-9) also received a first-round bye and then beat Troy Leibfried (42-8) of Cuba City/Benton/SW by fall in 5 minutes, 37 seconds to advance to the semifinals. There he lost to Gabe Wertel (41-3) of Denmark by a 7-1 decision. Moving over to the consolation bracket, Peterson defeated Trevor Daffinson (30-8) of GET/Melrose-Mindoro in the consolation semifinals by a 4-2 decision and was then victorious over Leibfried for a second time to take third by a 6-5 decision.

“Being a big guy, it’s hard to qualify when you’re a freshman or sophomore, I think anyways. Because they’re mostly juniors and seniors. He improved throughout the year, especially in the sectional tournament and the state tournament, that was the best he did all year,” Matzek said about how far Peterson has come for the Panthers. “His only loss at the state tournament was to the eventual state champ.”

Peterson said he went through a rough period but some inspiring words from his coach helped him turn things around.

“I had a rough start at conference taking second and then taking second at regionals,” Peterson said. “Then coach Matzek said at regionals ‘when you think the worst thing in the world can happen to you, the sun still comes up the next day’ and then it kind of hit me that it’s my senior year, I have about 10 matches left, there is nothing to lose at this point. Then at sectionals I took first beating two kids that I lost to once this year.”

Peterson added that having wrestled in Madison before really helped him the second time around.

“I think sectionals is where my peak was. I’d say I wrestled pretty decent this weekend, it really helps when you have been down to Madison and know the feeling of wrestling in front of a lot more people and getting past the nerves,” he said. “It also helps having just a great set of teammates pushing you everyday in the room.”

Three other Ellsworth wrestlers competed at state – seniors Bailey Poellinger (132) and Carter Huppert (152) along with sophomore Kyle Anschutz (220) – but they did not advance past the first round. Poellinger (30-16) lost to Bailey Thelen (38-4) of Two Rivers by an 8-0 major decision.

“Bailey, his first match it was a tough bracket of course, he gets matched up with a state finalist first round, that guy had been wrestling 145 all year believe it or not and cut down to 132 at the end, so he was a big kid,” Matzek said.

“What was unique about Bailey’s season was in January he hit a big lull, he lost like eight out of 12 matches or something like that in January,” Matzek continued. “He worked through it, believed in the process, worked on some mental aspects of his wrestling and then turned it on toward the end of the season here of course. For him to be able to do that was great for him personally, it’s the kind of experience like that that will help him not just in wrestling but in life.”

“Carter had a great season. He’s had some trouble winning some of those one-point matches and ended up one or two points short in some of the big matches, but that doesn’t take away the hard work and the effort and the sacrifices he’s put forth these four years on the team,” Matzek said about one of his most experienced senior leaders. “Just like all the other seniors, they worked their tail off and were great mentors for the younger guys.”

“For Kyle it was the experience as a sophomore at 220 pounds making it. He was knocking on 30 wins this year which is ridiculously hard to do for a kid that wrestles 220 and heavyweight,” Matzek said. “For him, that experience and just to kind of put it in perspective, Logan Peterson maybe had 20 wins as a sophomore and Kyle’s got 29 wins and went to the state tournament. That can show if he puts together a good spring and summer and fall, he can maybe catapult into a 34-40 win season next year.”

This finishes the 2019-2020 season for a young Ellsworth team that will return plenty of wrestlers next season, including Anschutz and others who advanced to sectionals.