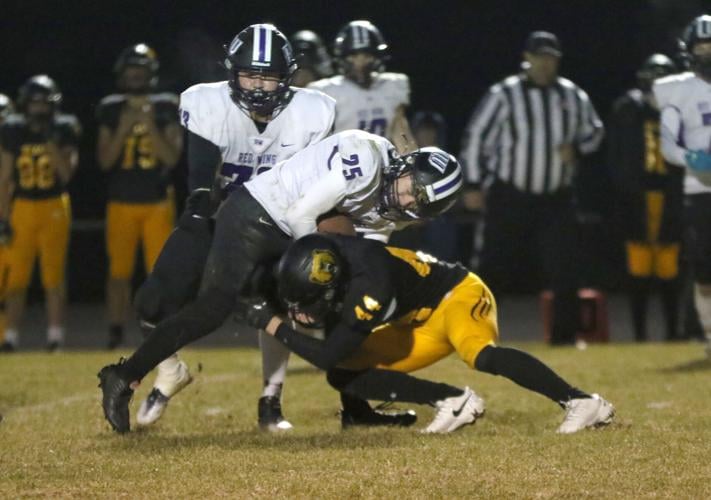 Red Wing's Kaleb Hove (25) lowers his shoulder into a Byron defender on a carry in the third quarter of a Section 1AAAA playoff game on Oct. 25. Martin Schlegel / Republican Eagle 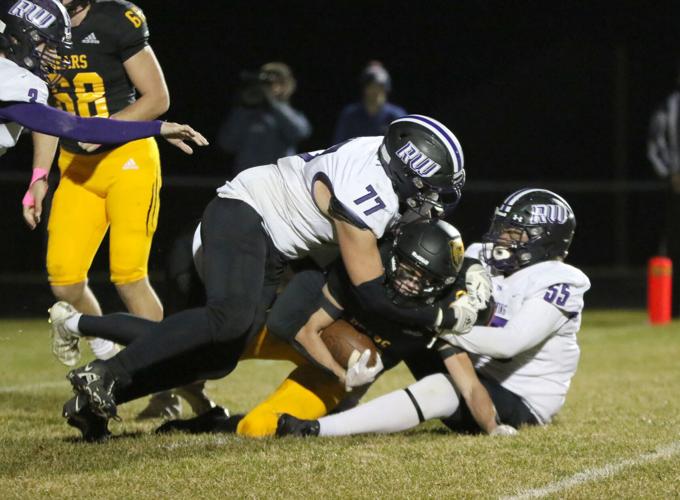 Red Wing defenders Rhowan Smith (77) and Cameron Walker (55) combine for a touchdown saving tackle toward the end of the second quarter in a Section 1AAAA playoff game on Oct. 25. Martin Schlegel / Republican Eagle 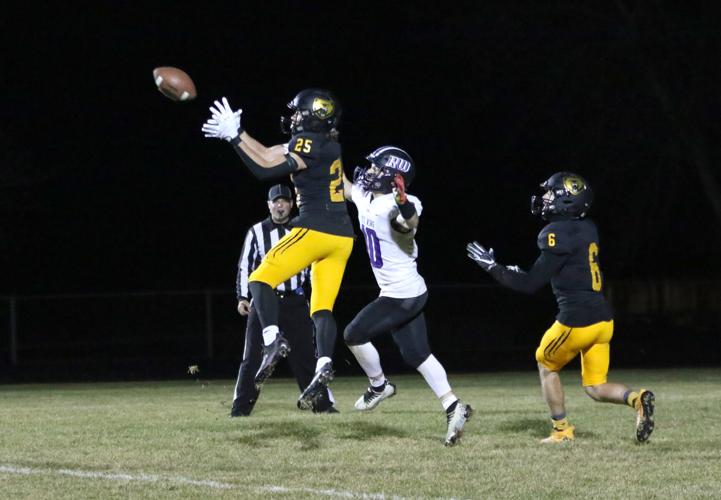 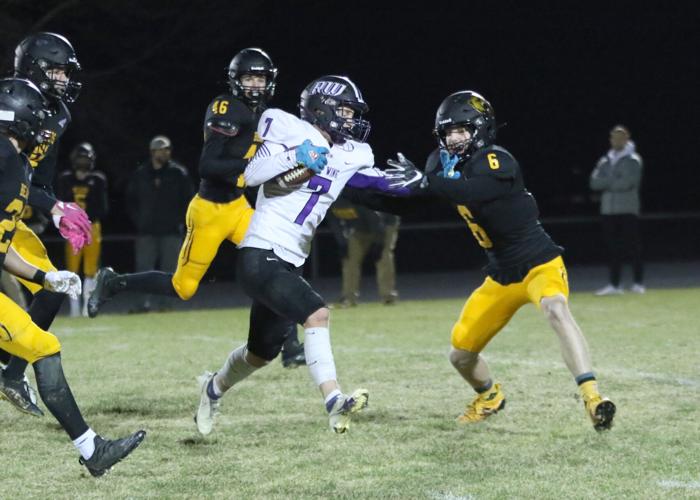 Red Wing's Kaleb Hove (25) lowers his shoulder into a Byron defender on a carry in the third quarter of a Section 1AAAA playoff game on Oct. 25. Martin Schlegel / Republican Eagle

Red Wing defenders Rhowan Smith (77) and Cameron Walker (55) combine for a touchdown saving tackle toward the end of the second quarter in a Section 1AAAA playoff game on Oct. 25. Martin Schlegel / Republican Eagle

As Red Wing took its time in the post game huddle, one common message came from each of the seniors.

“I've never been so close with a team in the last four years I've been starting,” senior Kaleb Hove said. “We were so close this year and it's very emotional. It was the last game; it still is this game.”

The Wingers were shut out in the opening round of the Section 1AAAA tournament by Byron 37-0 Tuesday night.

Hove, like many of the seniors, got playing time as freshman and started as sophomores. The group became closer and through the years have come

Brent Stinson said in his first year as the head coach he couldn’t have asked for a better group. He shared one-on-one messages with each of the seniors. He opened the post game speeches to any senior who wanted to say a few words. Overall, Stinson is proud of their work ethic.

“They kept telling each other that they loved each other and were proud of each other,” Stinson said. “They really committed all summer long all the way through. It's a huge commitment and the seniors did commit that time to it. They played every single game.”

A Byron coach came over to share a few words with the Wingers, talking about how proud he was of their commitment and passion. Hove said that sentiment can sum up the whole team.

“We put in our all this year,” Hove said.

The Wingers hoped to get off to a good start and seemed to early on as they put together a somewhat lengthy first drive to begin the game. They converted on a few third downs and made past the Byron 30-yard line before losing a few yards and punting. Byron had a similar first possession which ended in the Bears attempting a fourth-and-20.

Then the Bears defense dialed up the pressure.

Byron defenders sagged off the line of scrimmage. On nearly every play, the Bears would get out of a three-point stance, come off the line about 3 to 4 yards and shuffle around. Usually six, sometimes seven, defenders mingled together off the line.

What caused some confusion for the Wingers was how much pressure the Bears would bring, which players were engaging the line of scrimmage and which gaps they would attack. The Wingers found it difficult to let a longer passing play develop or run the ball up the middle.

“You didn't know which gaps they were going to,” Stinson said. “We knew which two guys were going, but sometimes they would cross and that can take your offensive line being cohesive as well to step together and take the correct gap. They brought it right at the line of scrimmage and we answered it early.”

On offense, the Wingers couldn’t replicate anything close to their first possession, which set up the Bears in better field position. After a scoreless first quarter, the Bears option offense took over.

While the Wingers defense did hold the Bears to a field goal in the waning minutes of the first half, perhaps a bit of momentum didn’t seem to transfer over to the offense as the Bears continued to stunt their lineman and linebackers.

Eighteen points in the second quarter and 12 more in the third for the Bears was plenty as the Wingers ended the game with 102 yards of offense.

Red Wing ended the season 1-8 overall. Coincidentally, the Wingers have ended its season in the first round of the Section 1AAAA playoffs at Byron in three of the last four seasons.

The last section playoff win for the Wingers came in 2017 when they beat Albert Lea 20-16 in the first round.

“It's culture, family. They brought me in as a freshman to the varsity squad. Made me feel at home. I'll never forget the memories I had with every senior and everybody before me. It means a lot.” – Kaleb Hove on what Red Wing football meant to him.

“That's all we asked, is to give us everything. All the effort, all the toughness, give us everything that you have because you're not getting it back. They did. That speaks to their character, their toughness, their perseverance. It's going to be a tough group to replace.” - Brent Stinson on what the players, specifically the seniors, gave to the program.