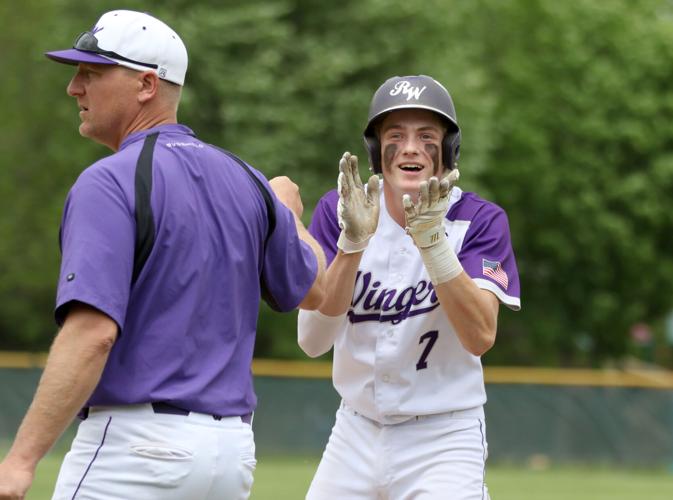 Red Wing's Reid Hartmann celebrates toward his dugout after driving in a first-inning run during a 4-2 win over Kasson-Mantorville in Section 1AAA action on Saturday. Martin Schlegel / O'Rourke Media Group 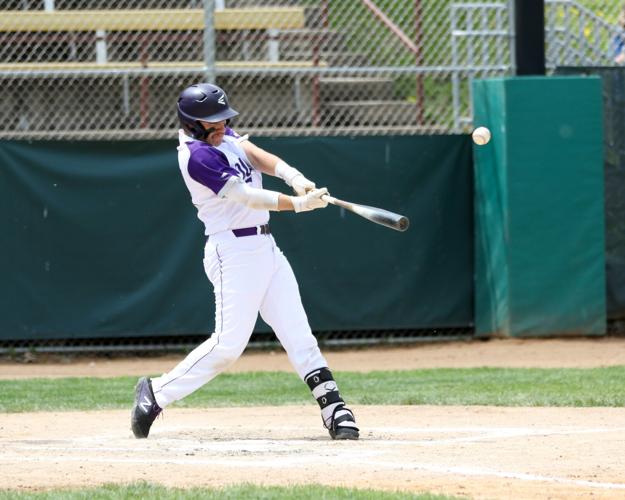 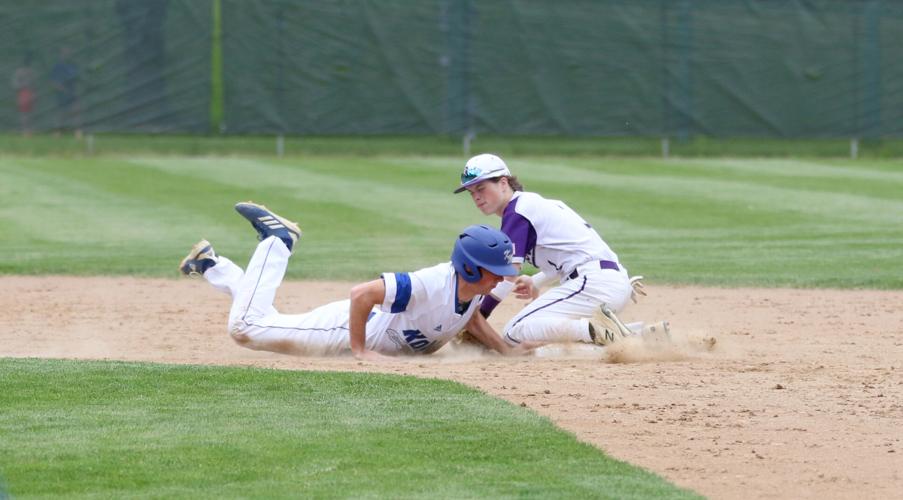 Red Wing shortstop Christian Koehler (right) applies a tag on a pickoff attempt at second base in a 4-2 win over Kasson-Mantorville in a Section 1AAA game on Saturday. Martin Schlegel / O'Rourke Media Group 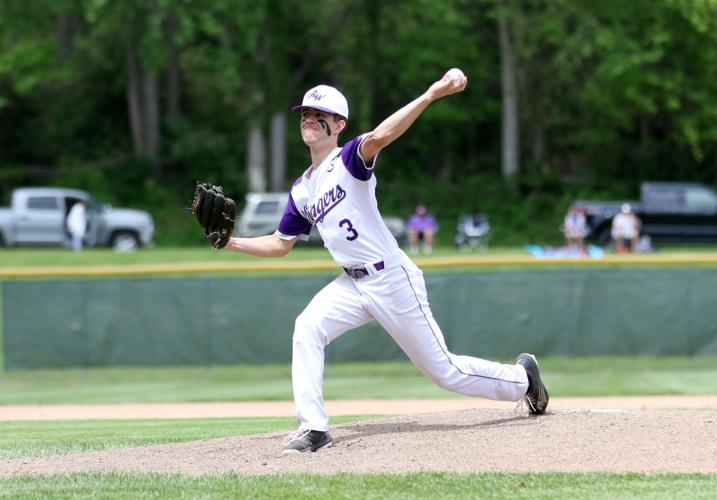 Red Wing's Reid Hartmann celebrates toward his dugout after driving in a first-inning run during a 4-2 win over Kasson-Mantorville in Section 1AAA action on Saturday. Martin Schlegel / O'Rourke Media Group

Red Wing shortstop Christian Koehler (right) applies a tag on a pickoff attempt at second base in a 4-2 win over Kasson-Mantorville in a Section 1AAA game on Saturday. Martin Schlegel / O'Rourke Media Group

All-season long Red Wing has been one of those teams that scores in bunches. Not too often do the Wingers peck away with single runs at a time. Once a couple runners get on base, the Wingers more often than not begin stringing together hits and score multiple runs in an inning.

That trend continued in a 4-2 win over seventh-seeded Kasson-Mantorville to open the Section 1AAA tournament.

Trailing 1-0 in the bottom of the first after an RBI-double by Corbin Horning, the second-seeded Wingers took advantage of a pair of defensive miscues by the KoMets. An error by the shortstop allowed Reese Tripp to reach safely. Andrew Ball reached on an error by the center fielder on a deep fly ball. Tripp scored from first on the play.

Abe Reinitz, Wyatt Gonsior and Reid Hartmann each singled to put the Wingers ahead 3-1.

“It's a lot better for us when we get up early and get the bats going,” Tripp said. “That was a big momentum shift for us in the dugout, you could feel it.

“We're big on pushing the order and having good approaches, good at-bats. It showed today. We left a lot of runners in scoring position, which we need to clean up, but it's big for us.”

The Wingers got another two-out hit in the third inning. Cooper Chandler looped a single into right field, scoring Tyler Rodgers.

There were chances to add to the 4-1 lead. A leadoff triple from Tripp in the fourth resulted in no runs. A leadoff double in the fifth turned into an out after tagging up to move up to third base too early. Mitchell Seeley singled, stole second, then was stranded at second to end the fifth.

“We had chances in the middle innings to extend the lead and didn't do it,” said Paul Hartmann. “We had a leadoff triple, leadoff double. Didn't move either guy. Other than that, our pitching was very good, and our defense was outstanding once again.”

Cooper Chandler, usually one to get ahead often, fought his control a bit in the middle innings. He held the KoMets to a run on three hits with eight strikeouts and five walks in 5 ⅔ innings.

Chandler started many of the KoMet batters with a ball, yet was able to more often than not still get an out. He fell behind 2-0 to five batters. Of those, he got an out on three of those at-bats.

“I think his strikeout-to-walk ratio has been 4-to-1,” Paul Hartmann said. “He was struggling with his control a bit. ... Sometimes when you don't have your best stuff, seven or eight out of ten times you may not have your best stuff you have to really bare down and compete and I thought Cooper did an outstanding job of that.”

Deso Buck pitched an inning and Tripp came in to get the final batter of the game.

Having had little pitching experience coming into the season, Paul Hartmann said Tripp has become one of the go-to relievers for the Wingers. Tripp said he’s enjoyed taking on that role.

“The big thing is just getting ahead and throwing strikes, making the batters put it in play,” Tripp said. The senior said he’s put in some work in the winter to prepare for the possibility of an important pitching role this season.

“We have a really solid defense that makes plays,” he said. “Make them hit it and we have guys that will make the plays.”