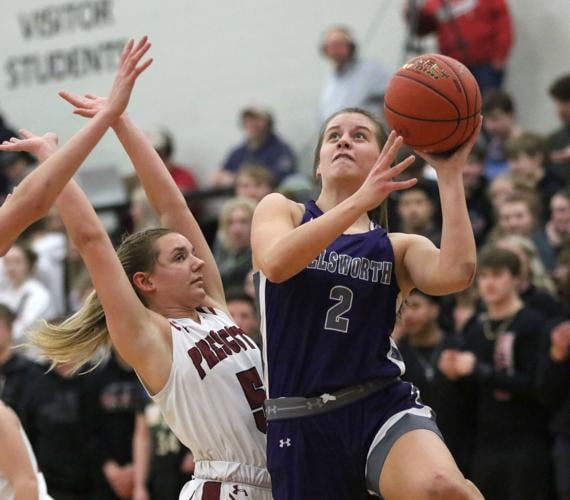 Molly Janke of Ellsworth (2) led the Panthers with 19 points in a loss to Prescott. Martin Schlegel / O'Rourke Media Group 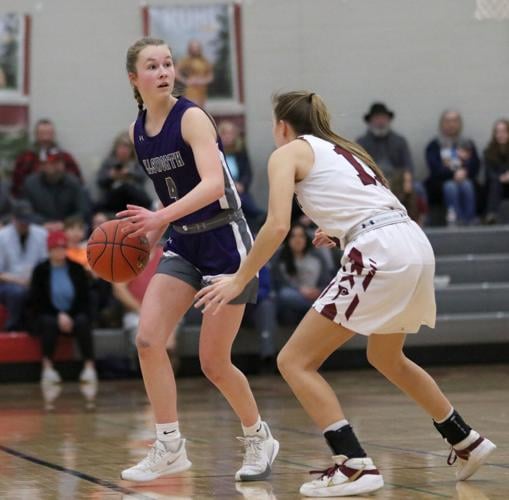 Ellsworth's Aubrey Wittenberg (left) looks for a pass after bringing the ball up the court in a loss to Prescott on Thursday. Martin Schlegel / O'Rourke Media Group 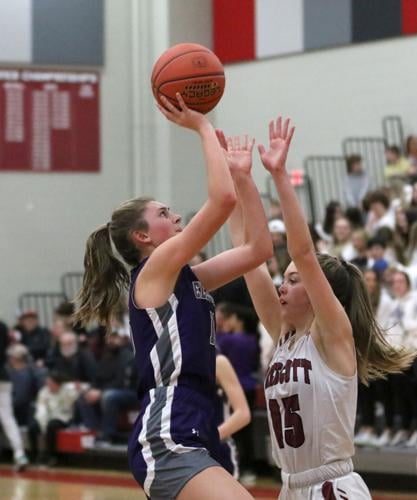 Ellsworth's Kayla Kressin (left) goes up for a layup in the first half against Prescott on Thursday. Martin Schlegel / O'Rourke Media Group

Molly Janke of Ellsworth (2) led the Panthers with 19 points in a loss to Prescott. Martin Schlegel / O'Rourke Media Group

Ellsworth's Aubrey Wittenberg (left) looks for a pass after bringing the ball up the court in a loss to Prescott on Thursday. Martin Schlegel / O'Rourke Media Group

Ellsworth's Kayla Kressin (left) goes up for a layup in the first half against Prescott on Thursday. Martin Schlegel / O'Rourke Media Group

The shooting woes continued for Ellsworth in a loss to rival-Prescott to end the regular season. The Panthers hadn’t lost three in-a-row all season until now. With the lack of shots on offense being made in the three-game skid, it is time for a mental reset with regionals beginning next week.

“You lose three in a row, and you are kind of frustrated. It's a good time to reset,” head coach Jason Janke said. “I think we're moving forward. We're going to take everyone seriously and see what we can learn.”

The Panthers fell behind 25-5 early on in the first half before surging somewhat back into a more manageable deficit. Again to begin the second half, the Panthers got a few steals and layups at the other end to chip away but the team couldn’t recover from the 20-point Cardinal lead.

In the first half, the Panthers made just five shots from the field.

While the Panthers found it difficult to get easier layups or easier touches to its post players Kayla Kressin and Jillian Griggs, they instead tried running jumpers and opted for slightly contested 3-point attempts. Nothing seemed to work.

Janke said the balance lies in what they were able to do against the Cardinals defense and what was working well at the moment. With seemingly nothing on offense working, the Panthers continued to attempt the tougher shots instead of working the ball around to open up an easier shot, which might not have been available.

“Everybody is trying to fix it by making a really good play rather than just try and move it around,” Janke said. “You can't really fault them because they are busting tail to figure it out.”

By now, the Panthers have experienced extremes in games. They’ve led by a lot and had teams make improbable runs to get back in the game. The Panthers themselves have been down by double-digits and have found ways to recover.

“For all their youth, they've played a bunch of ball and kept their cool,” Janke said.

The Panthers have already exceeded last season’s win total and with a starting group that includes all sophomores, it is still a learning process to find ways to overcome poor shooting nights.

The young Panther squad, the fifth seed, can use their short break before playing No. 12 Spooner in the first round of Division 3 regionals on Tuesday at home. If the Panthers win, they would face No. 4 Northwestern on the road on Friday.