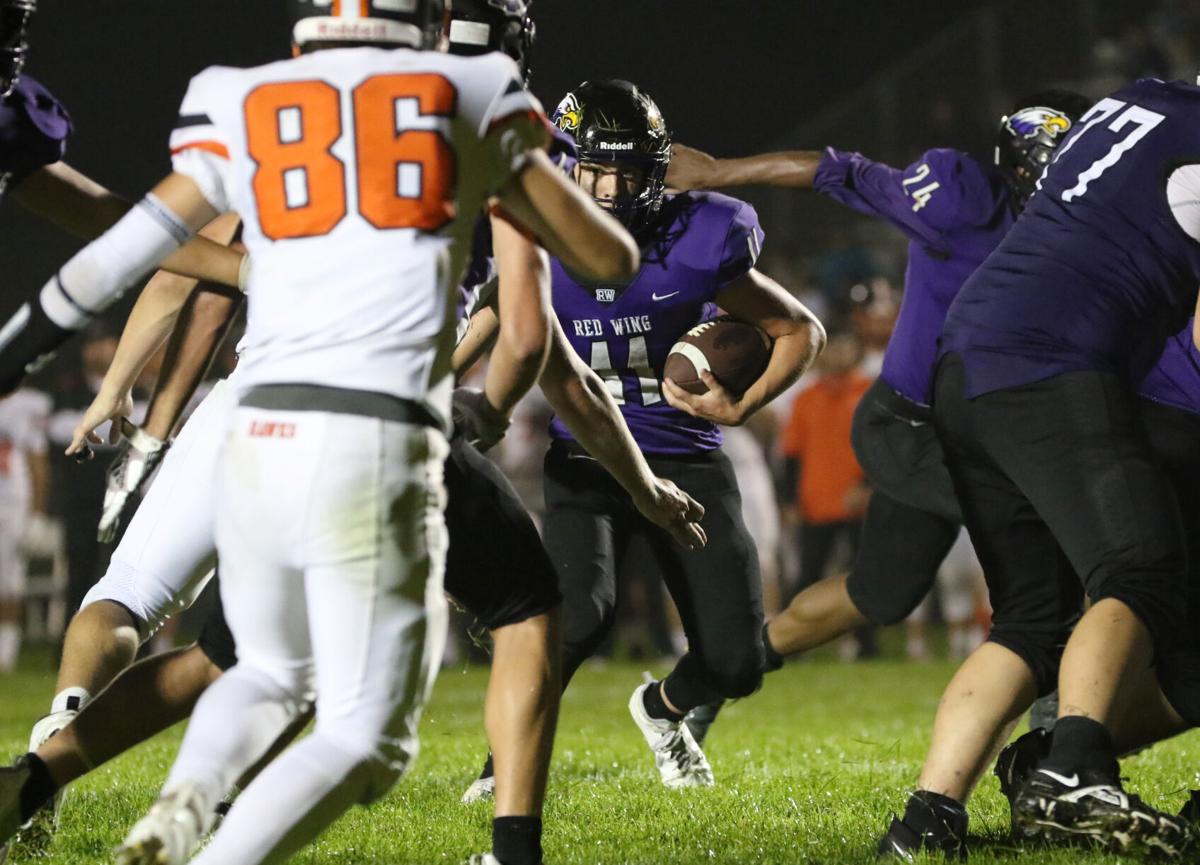 Cooper Chandler (11) eyes the hole on his touchdown in the fourth quarter of a 31-6 loss to Winona on Friday, Sept. 3. Martin Schlegel / O'Rourke Media 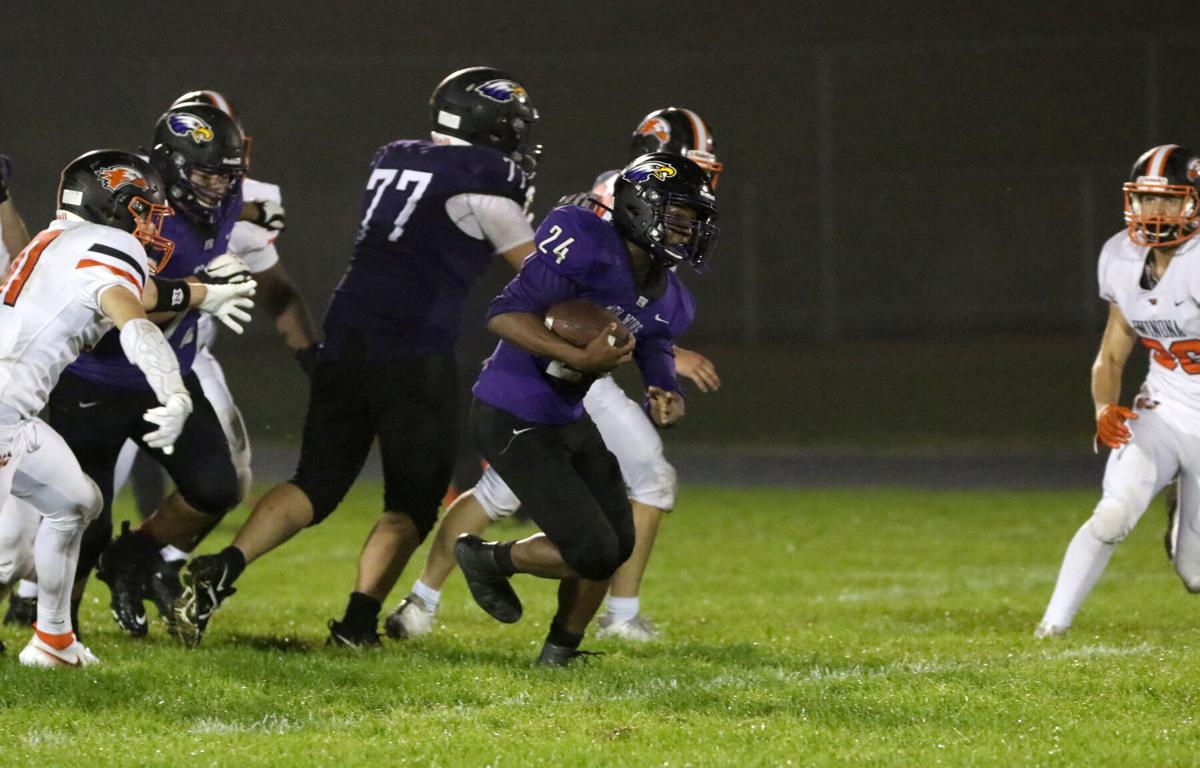 Red Wing's Antonio Finley (with ball) sheds a tackle on run up the middle in a 31-6 loss to Winona on Friday, Sept. 3. Martin Schlegel / O'Rourke Media 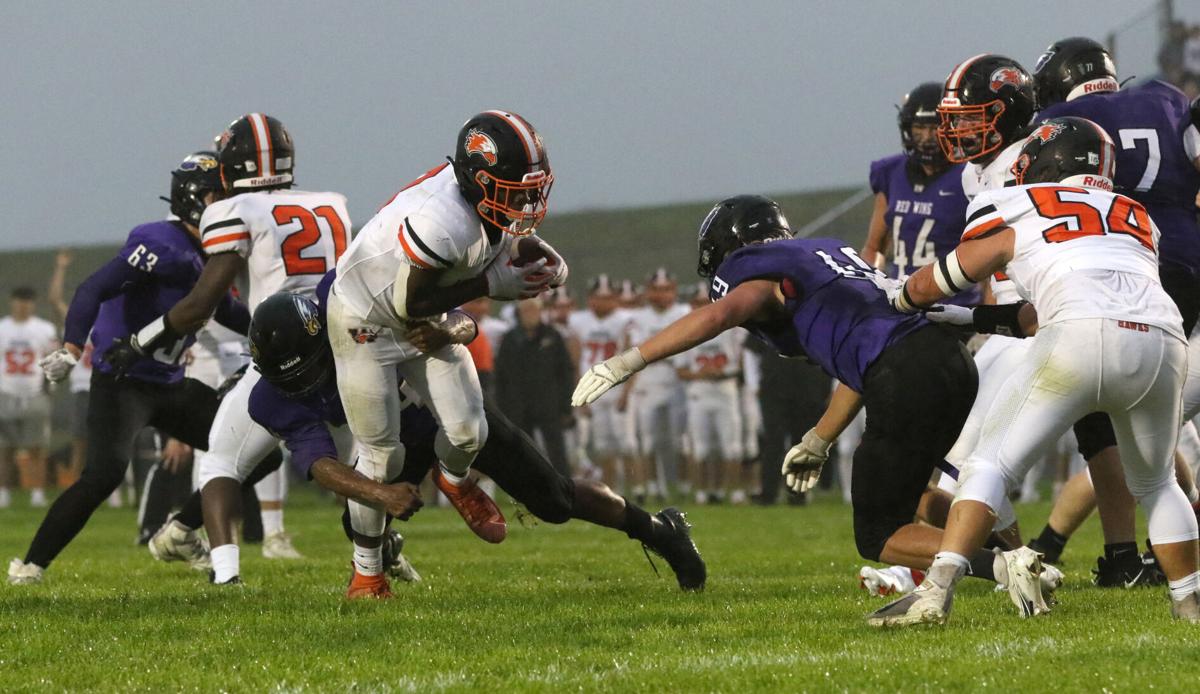 Red Wing's Antonio Finley and Vinnie Brandt (49) combine for tackle to keep Winona running back Dominic Davis out of the end zone in a 31-6 loss to Winona on Friday, Sept. 3. Martin Schlegel / O'Rourke Media 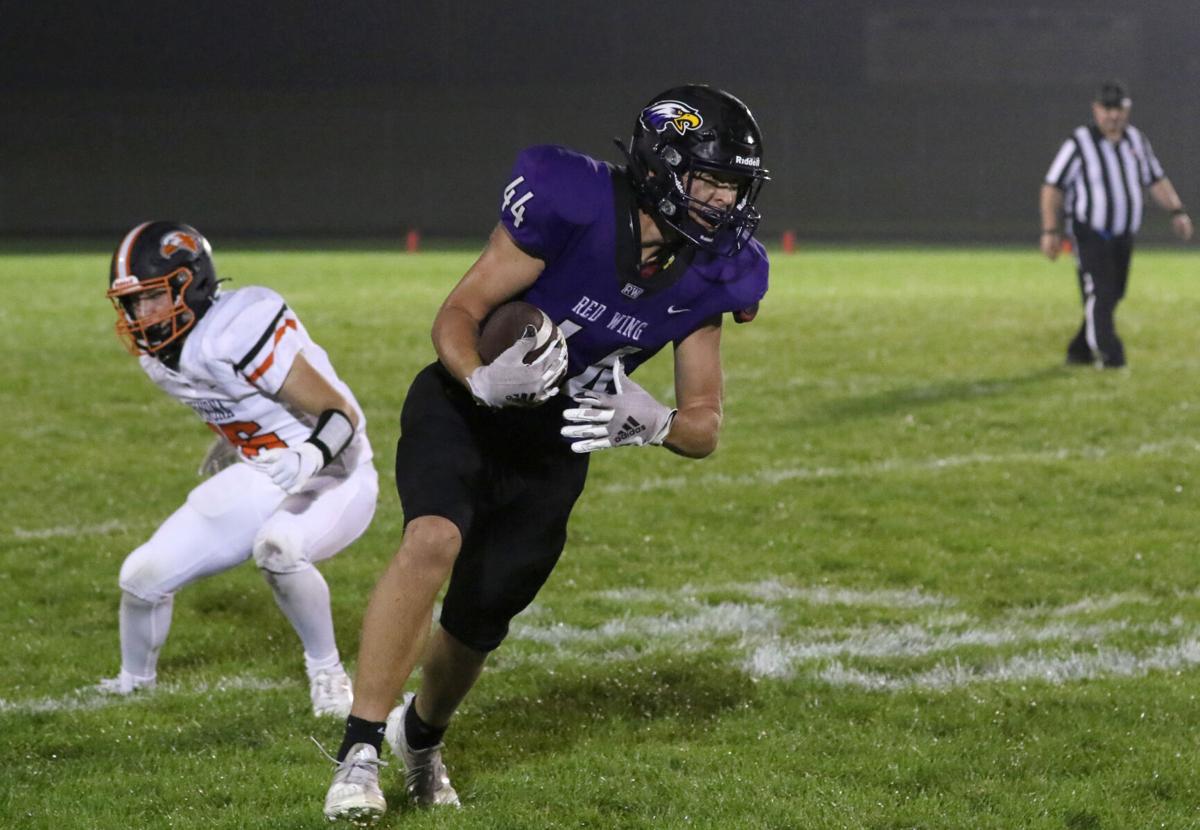 Reese Tripp (44) of Red Wing works down field after catching a screen pass, then forearm's a Winona defender in a 31-6 loss to Winona on Friday, Sept. 3. Martin Schlegel / O'Rourke Media

Cooper Chandler (11) eyes the hole on his touchdown in the fourth quarter of a 31-6 loss to Winona on Friday, Sept. 3. Martin Schlegel / O'Rourke Media

Red Wing's Antonio Finley (with ball) sheds a tackle on run up the middle in a 31-6 loss to Winona on Friday, Sept. 3. Martin Schlegel / O'Rourke Media

Red Wing's Antonio Finley and Vinnie Brandt (49) combine for tackle to keep Winona running back Dominic Davis out of the end zone in a 31-6 loss to Winona on Friday, Sept. 3. Martin Schlegel / O'Rourke Media

Reese Tripp (44) of Red Wing works down field after catching a screen pass, then forearm's a Winona defender in a 31-6 loss to Winona on Friday, Sept. 3. Martin Schlegel / O'Rourke Media

Having survived a first quarter filled with all sorts of miscues, the Red Wing defense needed to stop Winona on third-and-10 with the ball on Red Wing’s 15-yard line. The Winhawks passed to the middle of the field where the ball was initially caught but Cooper Chandler surging behind the receiver knocked the ball free for an incomplete pass.

On fourth down, Winhawks quarterback Jacob Heftman lobbed a pass to Mason Langowski in the end zone for a touchdown. Langowski’s catch gave the Winhawks an 18-0 lead with 6 minutes,10 seconds left in the third quarter.

Had the Wingers come up with the stop, and gotten the ball back into running back Antonio Finley’s hands, the remainder of the game might have looked a lot different.

“We were freelancing outside the scheme a couple times at different positions,” said head coach Nate Freier. “If you play inside the scheme and play physical, it'll work out your way. If you don't play as physical as the other team and occasionally break down in scheme then you're going to have some problems.”

Whether it was nerves or the misty, field-soaked conditions, the Wingers made a bundle of mistakes to begin the game.

Winona picked off Chandler following a 15-yard run by Finley with an extra 15 yards added from a face mask penalty on the Winger’s first possession of the game. On the Winger’s second possession, a fourth-down snap launched over the head of Abe Reinitz resulted in a 27-yard loss and gave the Winhawks the ball at the 4-yard line. The Winhawks also recovered a fumble on a short third down for the Winger offense.

To their credit, the Wingers hung around as they held the Winhawks scoreless on a drive that took the remainder of the first half after the fumble recovery.

What really doomed the Wingers was ill-timed penalties on big plays. Maurice Rosebear had an excellent return called back. Chandler had Finley deep down the field for a 40-yard reception that was called back for holding. Finley on a couple occasions picked up solid chunks of yards on the ground only to be called back.

“I think what happened was an offensive lineman gets beat,” Freier said. “He thinks I'm going to get beat again and he ends up sort of overcorrecting and that overcorrecting turns into a hold.”

Freier added he’ll go through film to diagnose all the penalty problems. The holding penalties can be teachable moments. However, he’d really like the Wingers to find the right balance between “letting your pads do the talking” and unsportsmanlike conduct penalties.

Both teams had their fair share of penalties. Winona came up with a couple third-down stops, but allowed the Wingers to keep the ball thanks to face-mask penalties. In total, the two teams combined for 438 yards of offense, but a staggering 225 yards on 23 penalties.

“You want them to be a little edgy. Don't let someone get up in your cage, get up in their cage,” Freier said. “I don't mean be a yapper. Intimidate people by the way you play. We have to fix that from being too chippy.”

Antonio Finley played extremely active on both sides of the ball. He was involved in just about every tackle. He also led the Wingers rushing attack with 92 yards on 12 carries, averaging 7.7 yards per carry.

Finley came out for one drive in the first quarter and it exposed the depth at running back for the Wingers, yet also showed how much the Wingers rely on and value when he's on the field. Trey Reiss and Vinnie Brandt filled in as backup running backs, or were in the backfield if Finley was lined up wide.

Brandt’s move from center, where he’d been practicing since August, to running back shows his versatility and could mean a rotation in positions for him depending on personnel.

Freier expects Kaleb Hove to return next week to back up Finley and boost the running game.

“He's the kind of kid that can motivate and raise the level of everyone around him.” - Freier on Finley.