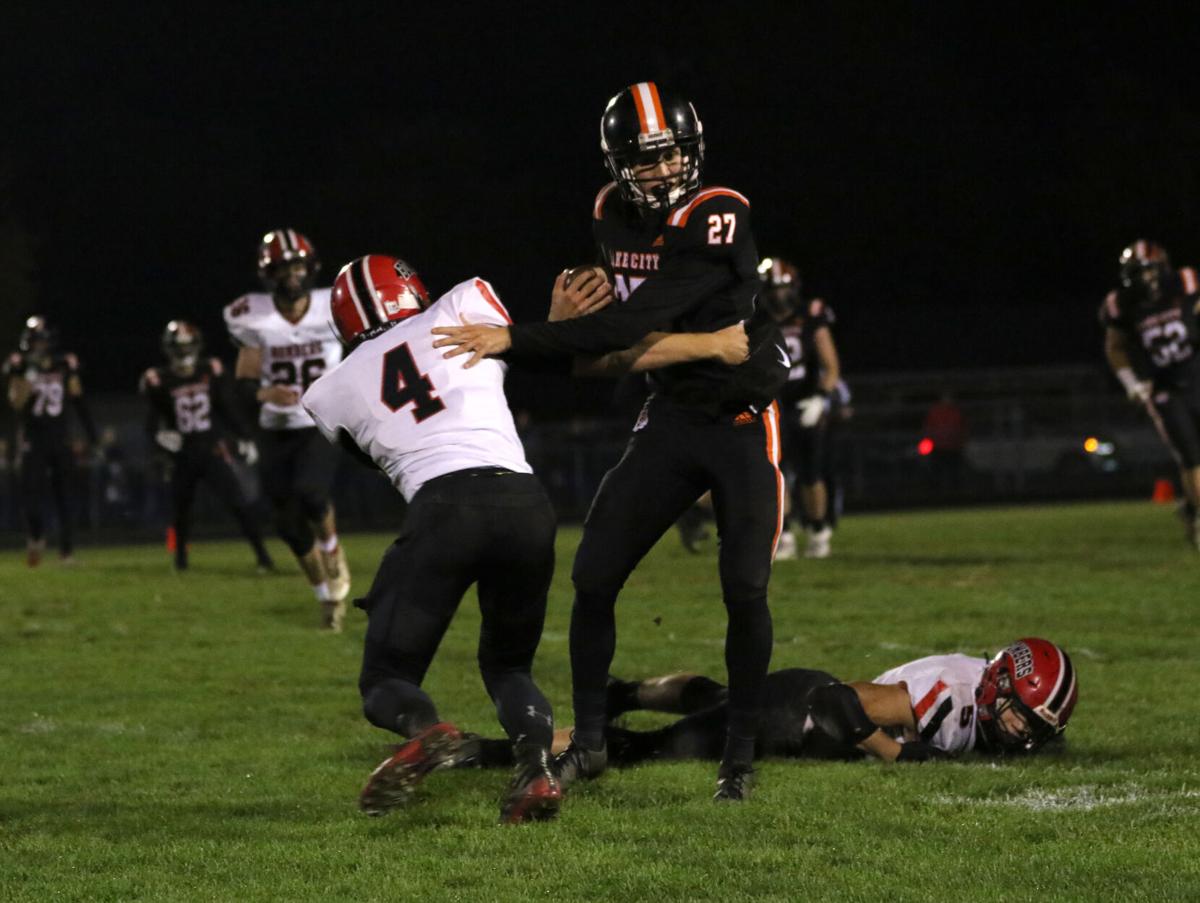 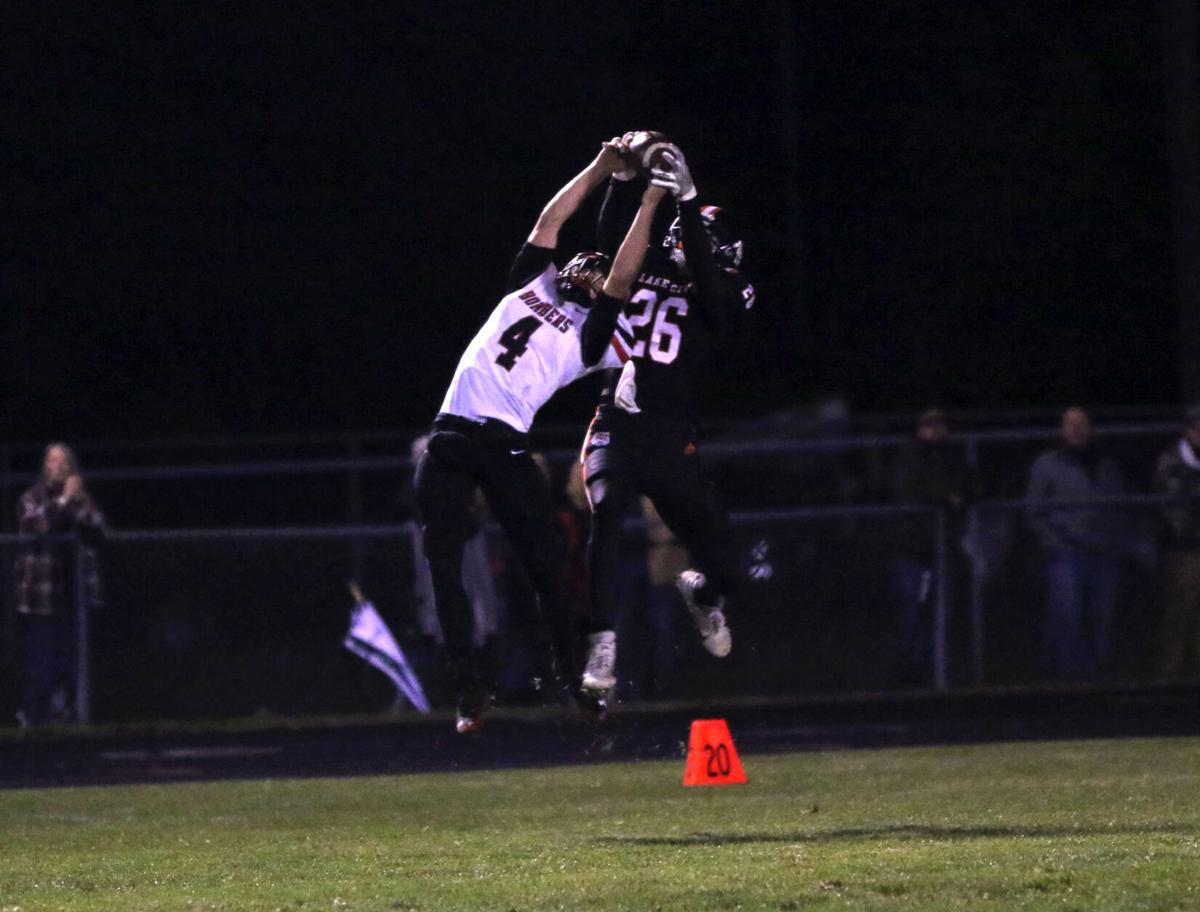 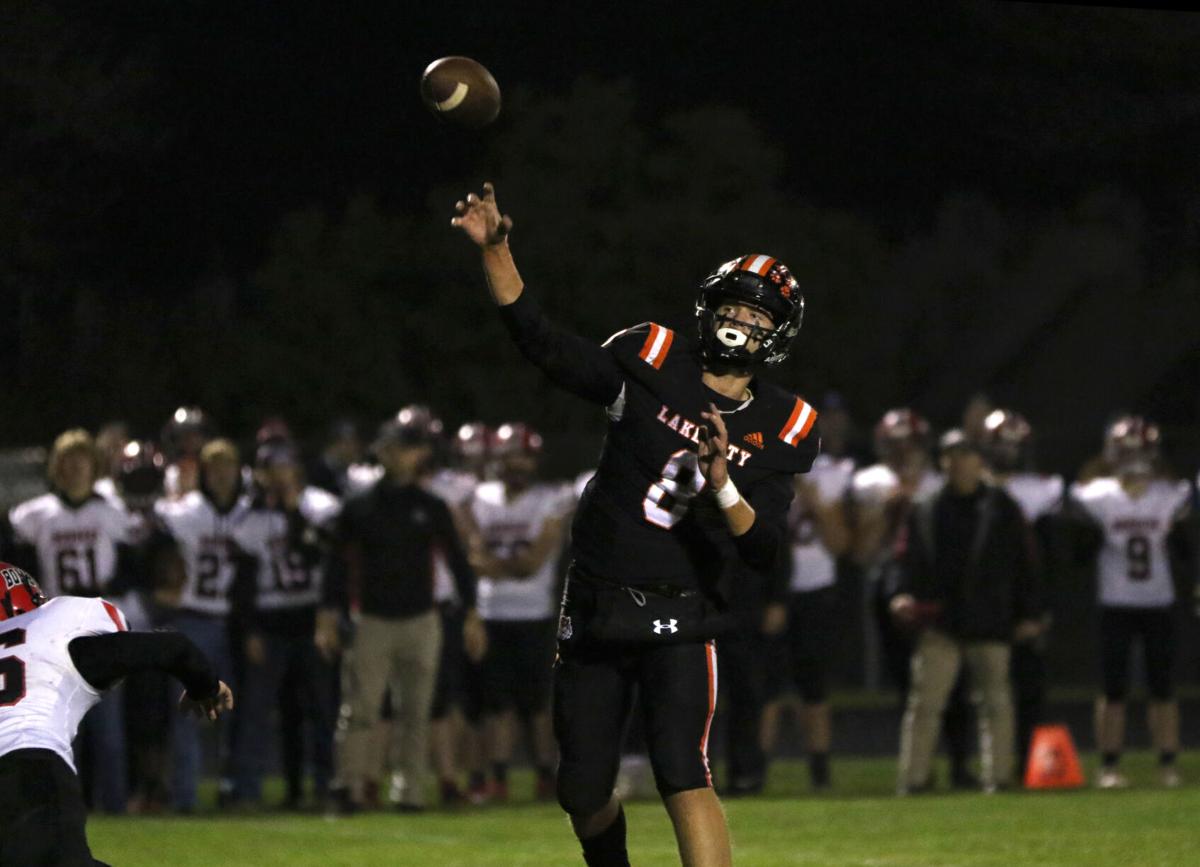 An onside kick changed everything.

Lake City and Cannon Falls were matching each other score for score in their district football finale Wednesday night. The only way to separate from the back-and-forth scoring in a game with few turnovers and a whole lot of offense was an onside kick.

Cannon Falls had just taken a 32-30 lead, the sixth lead change of the first half. The Bombers went for and recovered an onside kick. They scored on a QB sneak on the ensuing drive. The Tigers punted on their next drive, and the Bombers scored again with 3 seconds left on a running back streak to Riley Keenan to go up by two possessions at the half.

“That really swung the momentum,” Lake City head coach Trevor Narum said. “We were going score for score at that point in time. They got an extra possession and scored. We just didn't execute it very well. It was a beautiful kick. That was part of it. I think we froze a little, too.”

Lake City and Cannon Falls combined for 112 points as the Bombers pulled away with a 74-38 Wednesday night win in Lake City.

For the first 24 minutes of the game, the No. 6 and No. 1-ranked teams in Class 3A traded touchdowns. Even when Lake City was forced to punt early in the first quarter, the fair catch was fumbled by the Bombers, and the Tigers recovered. It took until the final minutes of the second quarter for either team to punt and not finish off a drive that resulted in points.

There were six lead changes in the first half, most of which came in the second quarter. By the end of the half, the two had combined for 76 points.

Down by two possessions coming into the third quarter, the Tigers needed a defensive stop or onside kick recovery to start the second half. They got neither and trailed by three scores. A quick deep pass to Zach Dather got the Tigers back to within two touchdowns but no closer as the Tigers failed to score the remainder of the second half.

If these two teams meet again in the section playoffs, there’s little doubt it would be another game just like this one.

“We knew not every time we were going to stop them,” senior Tiger quarterback Justin Wohlers said. “We knew we had to come back out and score just to stay in the game. If you let them score two or three (touchdowns) in a row, it's hard to come back against this team.”

Each team went with their strengths and attacked the other’s weaknesses. The Bombers ran the ball beautifully all game, scoring on long and short runs. The Tigers utilized its receivers deep down field with regular success.

Wohlers said throwing into one-on-one coverage and getting good results is something he’s been able to do all season. It also was the plan for Wednesday night.

The Tigers had their quick-strike offensive ability on display in the first half and were able to match the Bomber offensive despite the two teams running the complete opposite styles.

Wohlers said after the game the key is to try to get more turnovers. It’s not really a matter of stopping them as much as it is getting the ball back. From the Tiger’s perspective, they expect the Bombers to score a lot and need to match that output when the Bombers don’t turnover the ball on offense.

“They just held on to the ball. Defensively, we started stopping them and their drives took longer. We didn't have the ball in our hands,” Wohlers said. “I was on offense two or three times in the second half, compared to the first half where we had the ball a lot in the first half. That was a key factor. We have the ball, we score. If we don't, they had time of possession, they took away our time to score.”

Lake City (7-1) likely gets the second seed in Section 1AAA, while Cannon Falls (7-1) gets the first seed. The two teams have every intention of facing each other again for a chance to go to state. The loss now for the Tigers hurts a lot less than it would later.

“We would have liked to win it tonight, we'll see them again,” Wohlers said. “We want to see them again. It'll be a good game again.”

Since neither team seemed like it was going to punt, converting on fourth down had a major impact on the game.

The Bombers were 2-for-2 on fourth down. The first conversion came on a fourth-and-1 in which the Bombers ran in for a 14-yard touchdown. The second kept a possession alive on fourth-and-2 which led to a touchdown.

“Their student section was getting after me. I'm used to people taunting me. I like it. It motivates me more to go kick some ass next week. It doesn't really get under my skin but it pushes me to work a little harder and go prove myself a little more.” - Tiger quarterback Justin Wohlers on hearing the Cannon Falls fans chant his name in the fourth quarter.

“Our team had three goals this year, not one of them had anything to do with winning the district. Their number one goal was to win sections so that goal is still out there on the table. The regular season is over and our goal is to play these guys again in a couple weeks for a section championship.” - Lake City head coach Trevor Narum on the team’s focus on getting to the section championship and winning there instead of trying to remain undefeated.