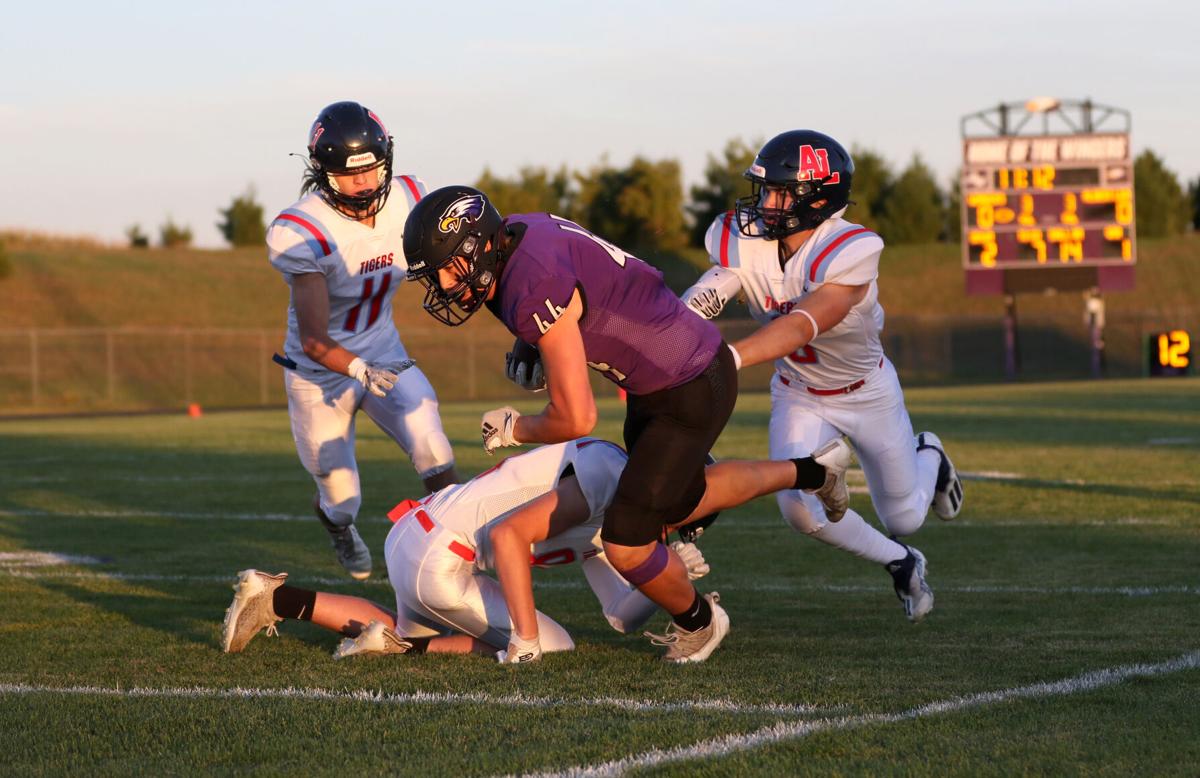 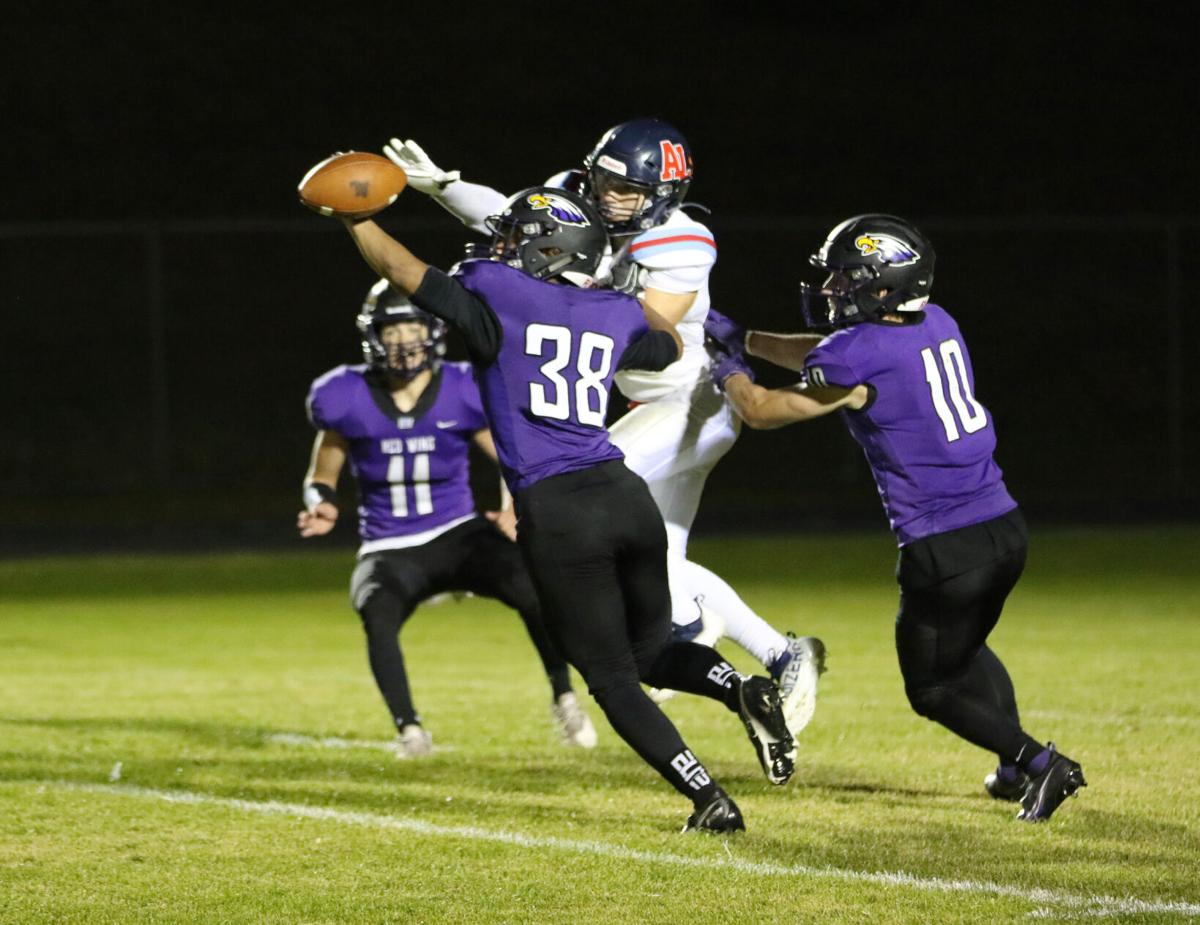 Thomas English of Red Wing (38) breaks up a pass in the fourth quarter of a win on Sept. 17. Martin Schlegel / O'Rourke Media Group 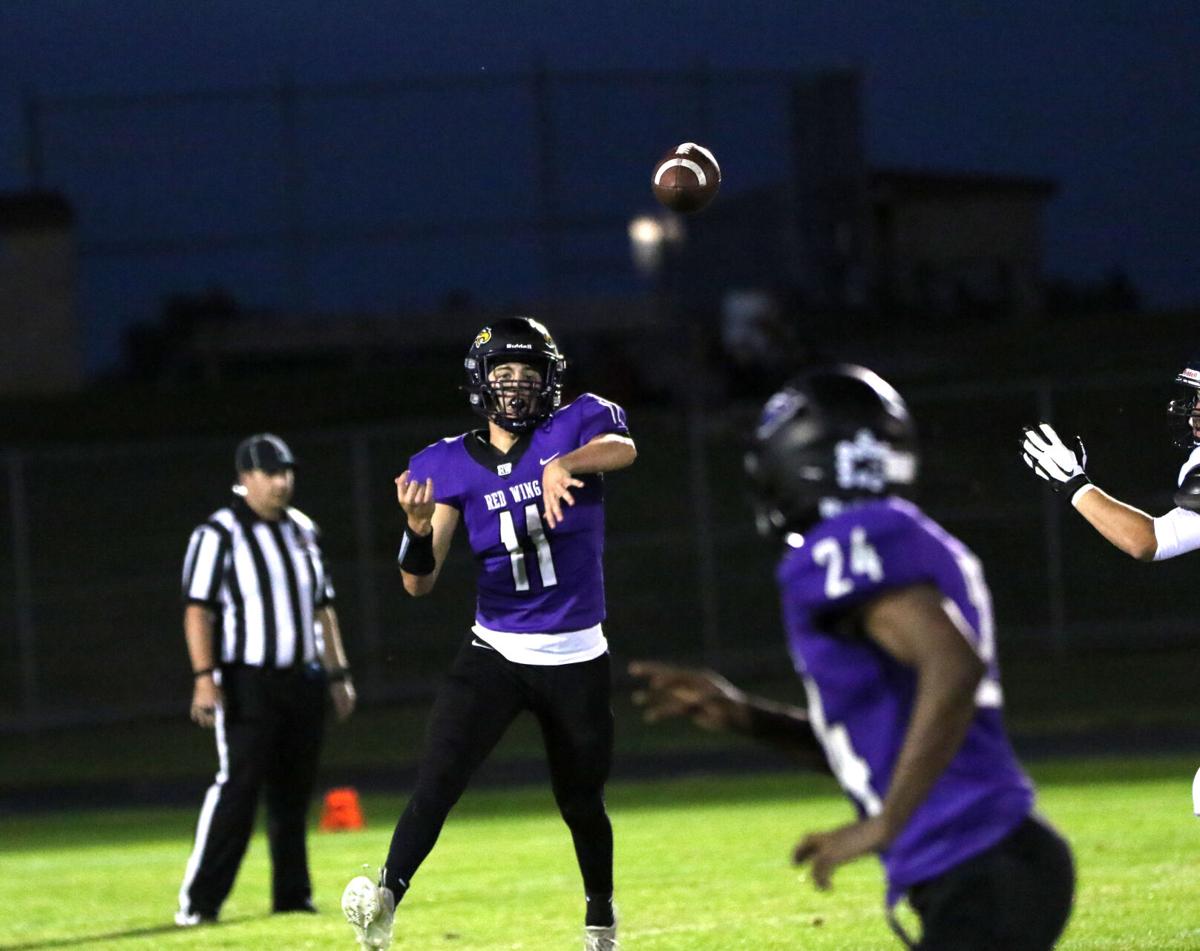 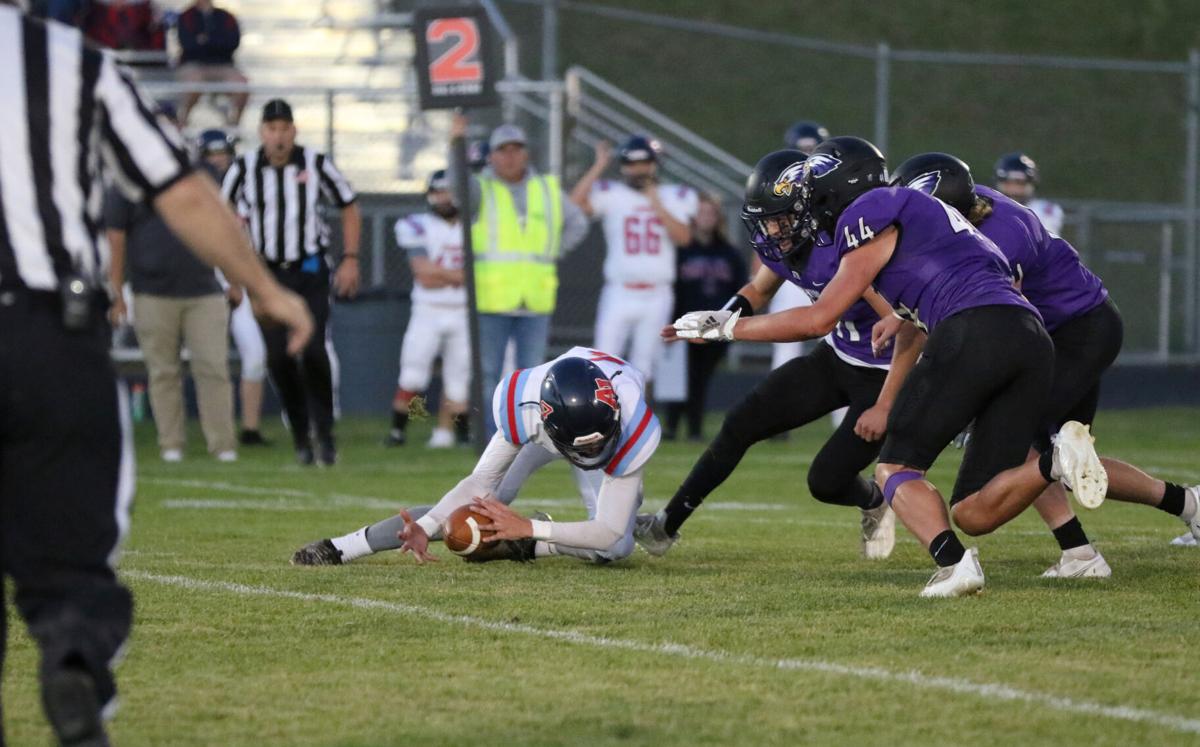 The Red Wing defense converges on a fumble being covered up by Albert Lea in the first quarter of a game on Sept. 17. Martin Schlegel / O'Rourke Media Group 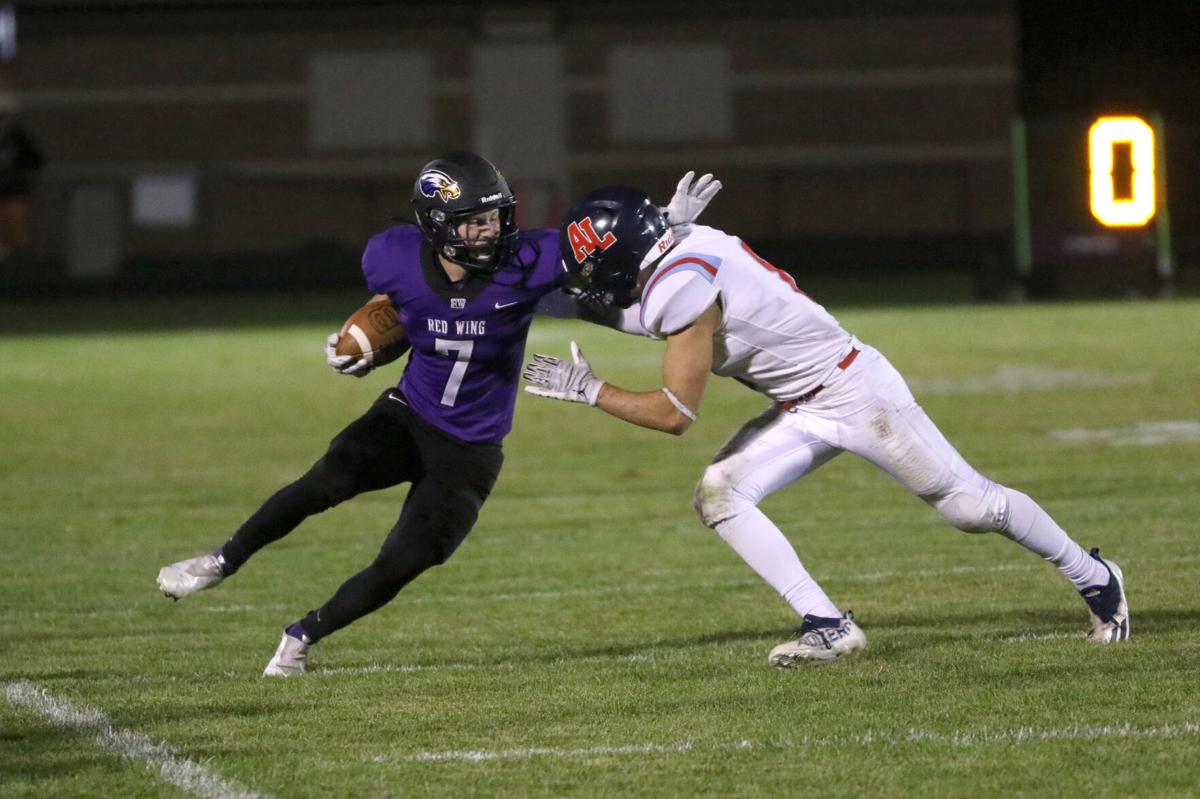 Thomas English of Red Wing (38) breaks up a pass in the fourth quarter of a win on Sept. 17. Martin Schlegel / O'Rourke Media Group

The Red Wing defense converges on a fumble being covered up by Albert Lea in the first quarter of a game on Sept. 17. Martin Schlegel / O'Rourke Media Group

The baby-powdered student section stormed the field. Three players dumped the remaining water over head coach Nate Freier. Friends mobbed the team in the end zone. The release of pent up energy, waiting for so long to walk off the home field victorious was intense.

The excruciatingly long final minute built anticipation. An Albert Lea touchdown with 3.1 seconds left only delayed the inevitable even more.

Caught up in the excitement, the group of players holding on to the water jug to dump on Freier had to put it down after holding it so long. Albert Lea’s kickoff resulted in a touchback and the Wingers needed only to kneel the ball, but forgot about the ball.

Red Wing finally went through the formalities to close out a 38-14 win Friday night at Russ “Cougar” Marshall Field in front of a Winger homecoming crowd.

Midway through the fourth quarter, Antonio Finley bulldozed his way into the end zone from 6 yards out to extend the Wingers lead to 38-7. If it didn’t feel real before, it did after.

On the sideline, players were talking about it; the last time Red Wing won a game. Every player knew how long it had been.

The Wingers last won a game on Oct. 24, 2017, against Albert Lea in the first round of the section tournament. The last regular-season win came all the way back on Oct. 2, 2015 when the Wingers beat Austin 56-50 in a high-scoring dual.

To win on homecoming and have your classmates, friends and family embrace you feels extra special to the senior group that stuck it out and are realizing some of their capabilities on the field.

Senior quarterback Cooper Chandler said after the game there’s no better feeling than being a senior for this, the 2021 homecoming.

“I'm feeling amazing right now. Top of the world right now,” Chandler said. “No better feeling than this. I just knew if we went out and executed, it would pay off. And it did. I'm so pumped.

“Each one of these guys come out to practice every day. Haven't won a game in a while. Just to see it all pay off is amazing.”

Everybody seemingly had a moment. Running back duo Finley and Kaleb Hove kept plowing through tackles all night. Chandler used the read option brilliantly, finding wide-open targets or scrambling for positive yards.

Junior linebacker Thomas English met the Tiger runners near the line of scrimmage and broke up passes over the middle. Senior Reese Tripp and the defensive line stuffed a majority of the Tiger screen passes. Junior Tyler Rodgers and sophomore Konnor Kelly each had a few pass deflections.

Junior cornerback Mitch Seeley intercepted a ball along the sideline in the second quarter. The Wingers scored on the ensuing possession.

“This is one of our best (overall) games in the last four, five years,” Chandler said. “I think our defense played stellar tonight, the best I've seen our defense play since I've been playing on this team. I just can't be more proud of these guys.”

Freier noticed Chandler reading the defense and calling audibles at the line. He saw a team that was motivated all week to produce on the field. He saw players overcome with joy. The elation that followed was long overdue.

“It’s an amazing game,” Freier said. “I want the city and town to fall in love with it again so we can have all kinds of nights like this.”

The Wingers had three touchdowns called back, erased due to penalties. They were all plays of at least 20 yards. A couple passes were slightly overthrown or dropped when the receiver was wide open. Apart from those few instances, the Wingers played well. They were the better team.

With Chandler feeling confident in not just himself, but running the whole offense too, the Wingers thrived on the ground with Hove and Finley splitting carries. Chandler got more receivers involved in the passing game.

“I saw that they would bite down hard on the fake handoff, I could just take off after that. We started running that offense last year, at first I was iffy with it. Then everything kind of clicked. We started running it right and it started working.” - Chandler on what he saw reading the Albert Lea defense.

“Down at the goal line, I called something. (Chandler) nixed it. But I like that. They are starting to feel confidence in playing the game and understanding what is going on in the game.” - Freier on Chandler and the rest of the upperclassmen.