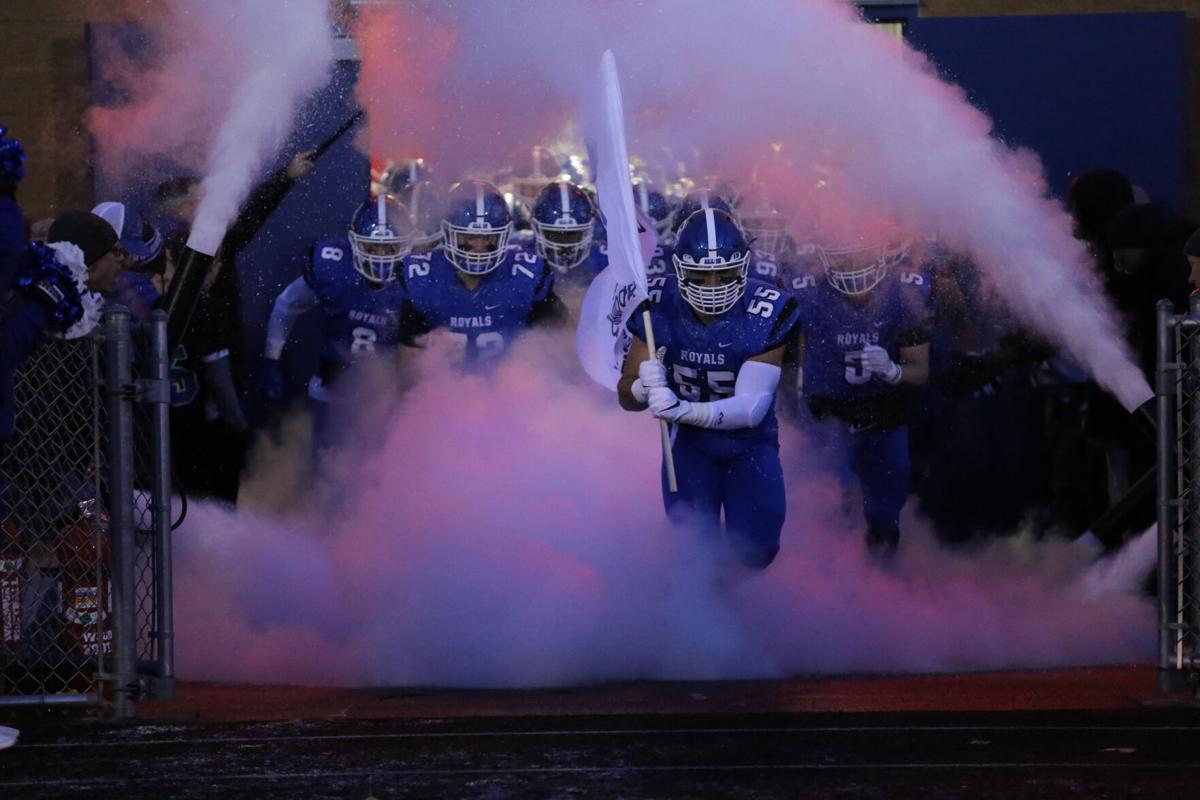 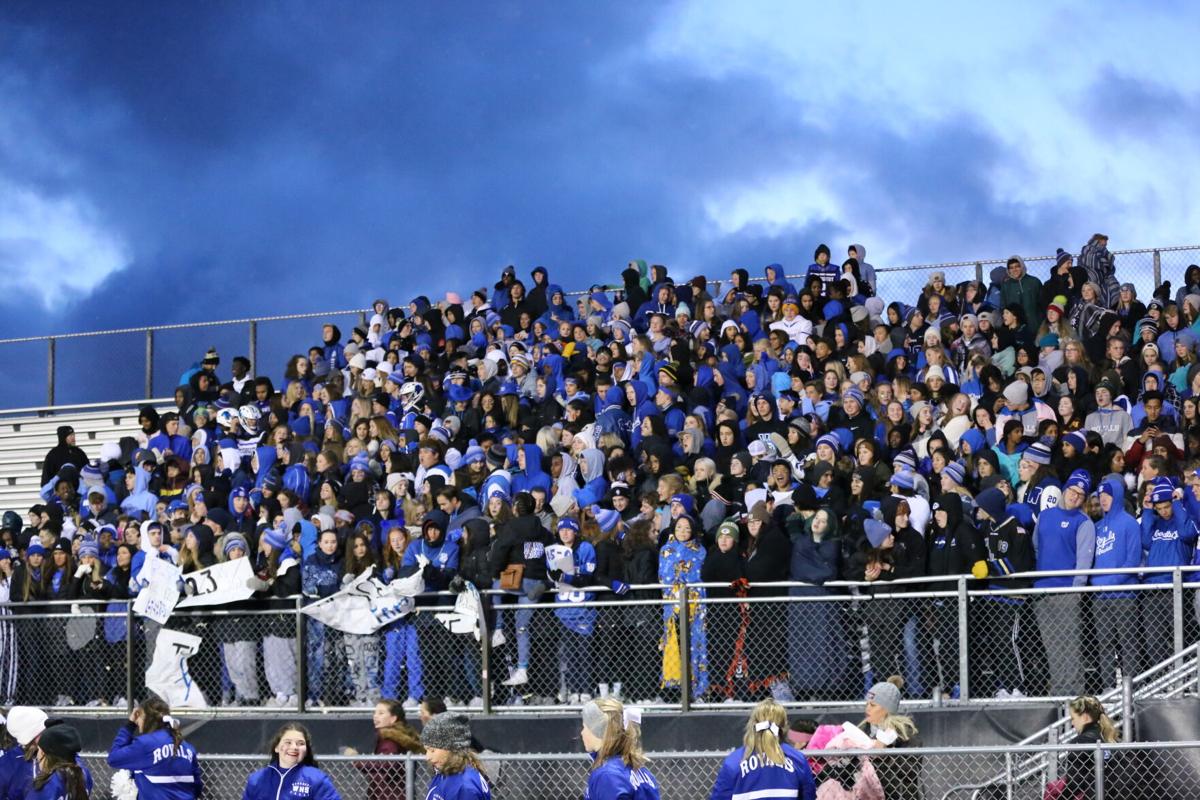 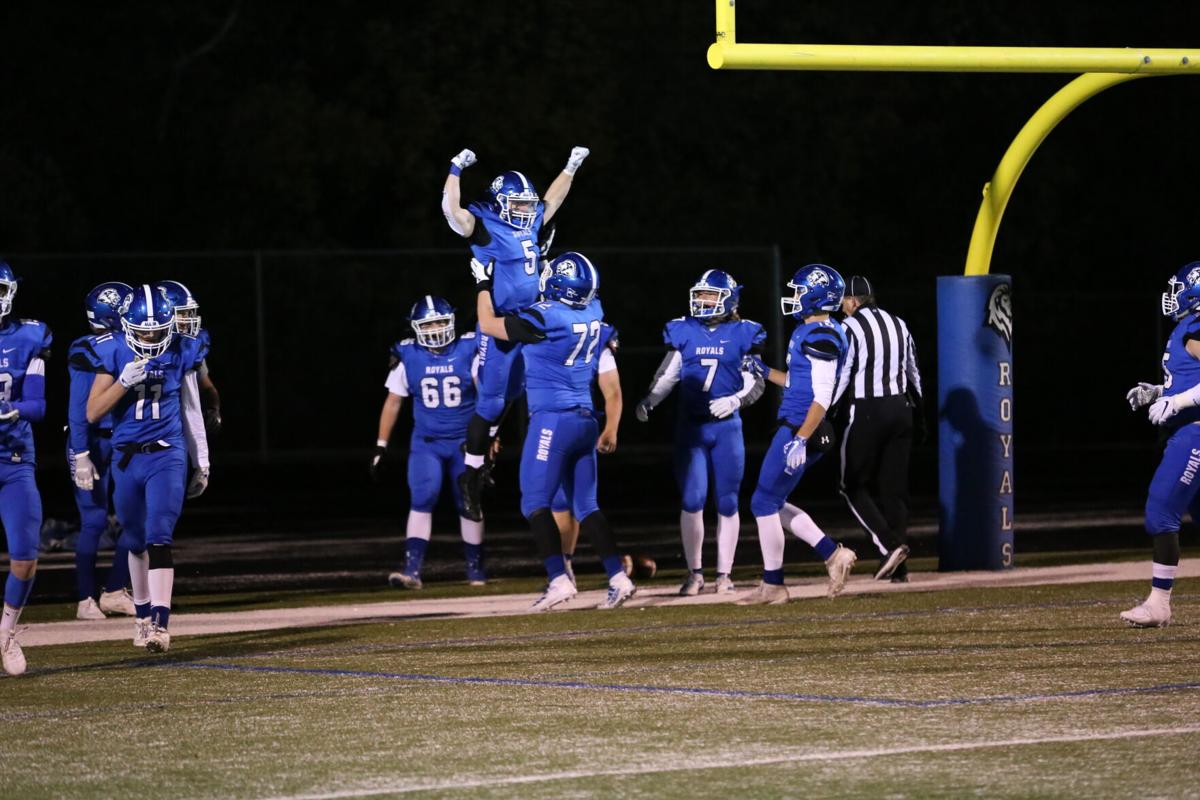 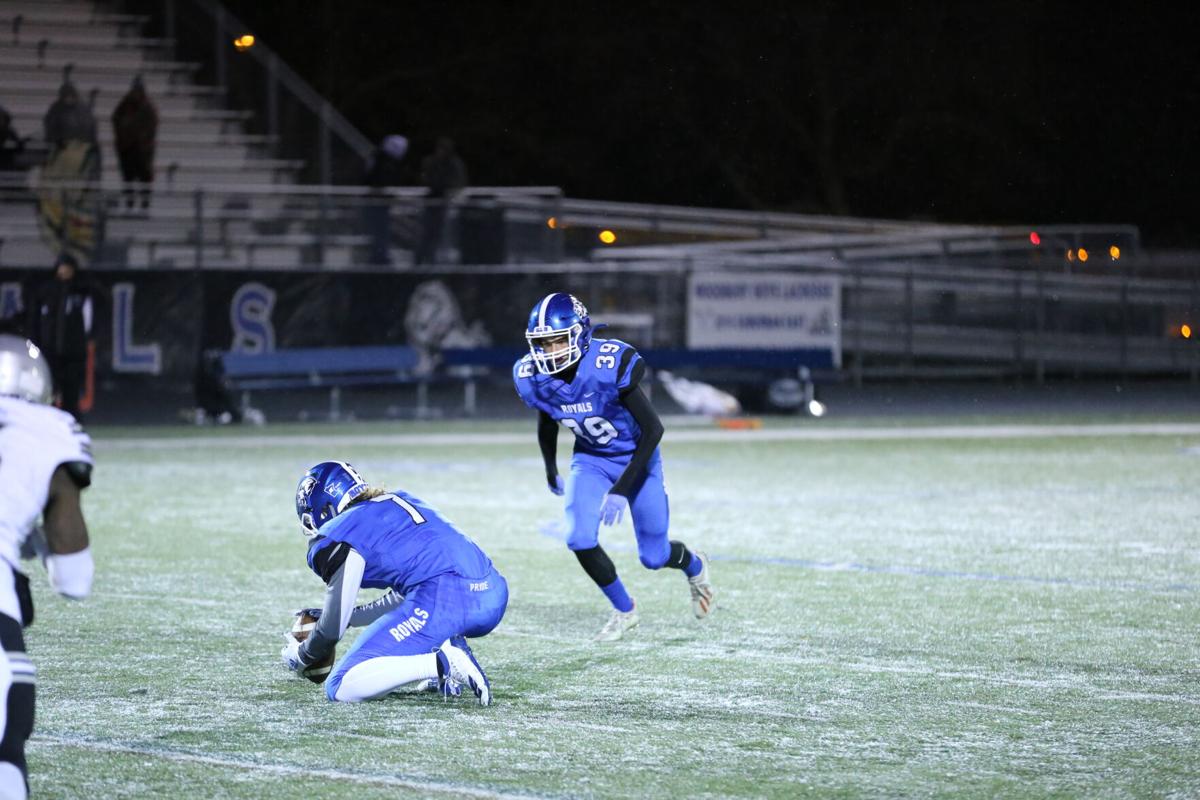 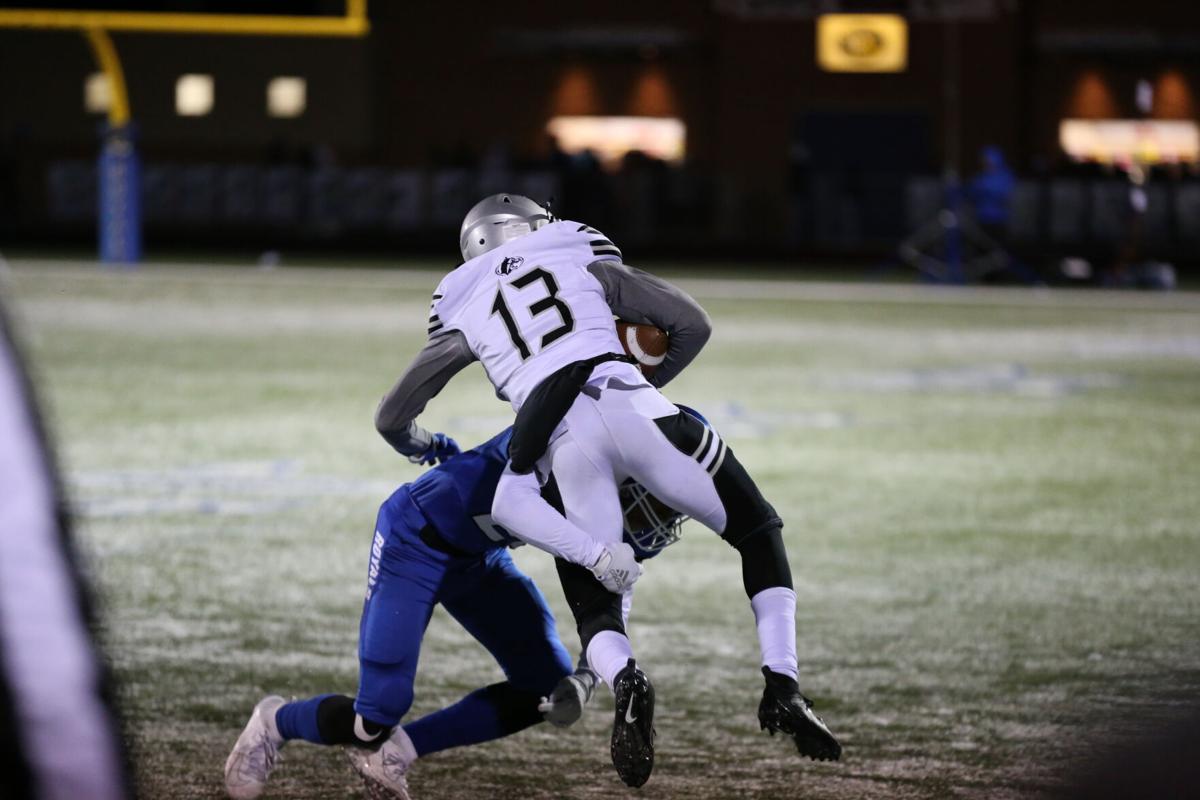 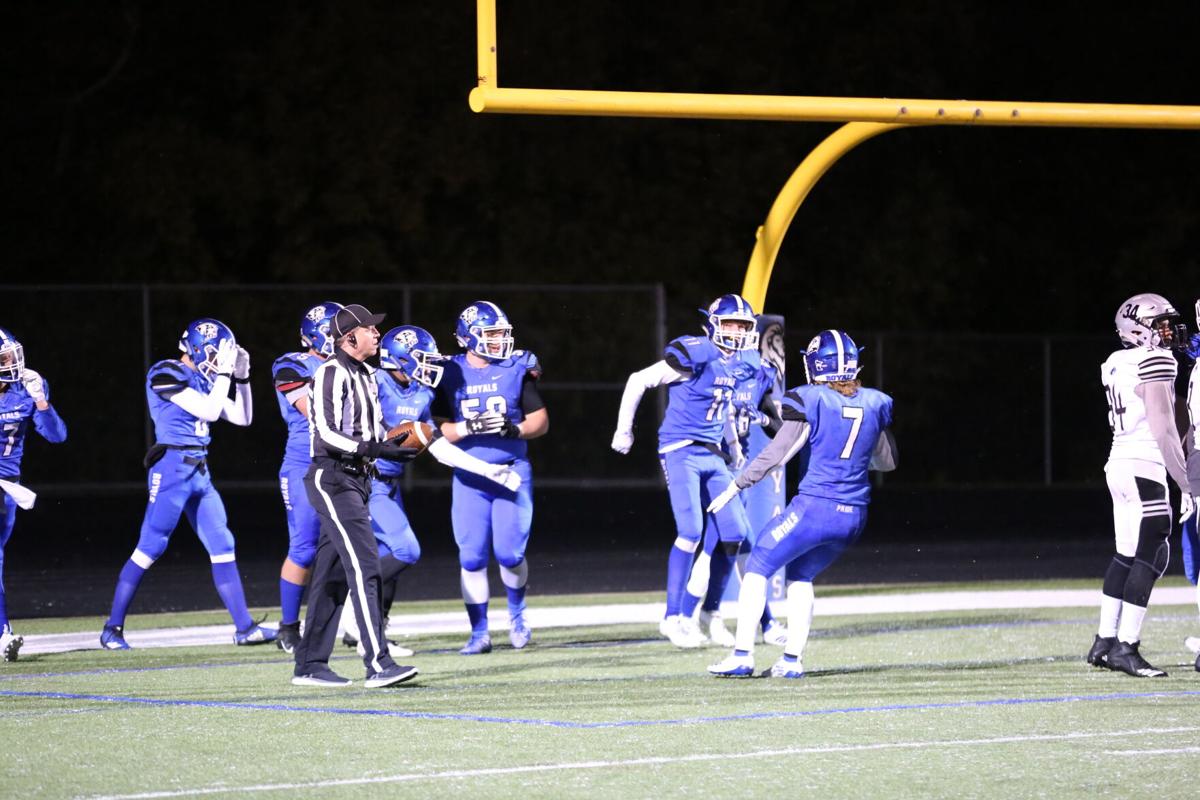 The last time Woodbury defeated Roseville in football was back in the 2015 season, but the Royals weren't going to let that happen on Friday night.

Not only did the players and coaches want to stay on top of the district standings, but it was homecoming night at Woodbury High School. The Royals wanted to get the win for their home crowd.

Right away, Woodbury took control of the game and never looked back as the Royals won 33-0 over Roseville to improve to 4-3 on the season and 4-1 in the conference.

"It was a good game all around and I was happy with how we played all four quarters," said head coach Andy Hill. "It's nice to get these wins on homecoming night and senior night in front of our home crowd."

The weather was a big factor for the entire night as it was snowing and the wind was constantly blowing, so Hill had a strategy for the game. He wanted to have the wind at Woodbury's back during the second and fourth quarter and the Royals were able to take advantage with a couple of plays.

It was a strong night for the Woodbury offense, defense and special teams, which created a large lead at the half and control throughout the entirety of the game.

Offensively, the Royals looked to running back Brock Rinehart in the first half. He scored the first points with about four minutes left in the first quarter as he ran in a 1-yard touchdown to make it 7-0 Woodbury.

The second quarter started with a bang as Rinehart found an opening and ran for a 25-yard touchdown to make it 14-0 in favor of the Royals. A scary moment came in the middle of the second quarter when Rinehart came running off the field holding his right leg.

He walked around the sideline and seemed to be running just fine, so he went back into the game. Rinehart got the ball in the backfield and went to run and immediately went to the ground to take a knee.

He came off the field holding that right leg again and went into the locker room for the rest of the second quarter. Rinehart also never played in the second half, but Hill said that was a coaching decision. Hill didn't want Rinehart coming in with the snow and cold, especially with a 20-point lead at the half.

Rinehart will be evaluated this weekend to see what his status will be for the game on Wednesday, Oct. 16, at White Bear Lake.

When Rinehart came out of the game, the Royals looked to their special teams to finish off the half. The second quarter was a period of many yellow flags flying in the air.

"It's always great to see all three parts of our team working well in a game," said Jake Wenzel. "Our defense continued to show their strength, the offense was able to score in many different ways and special teams was able to help us finish off some drives. That well-rounded play helped us get this win tonight."

With the wind at his back and helping him, Padelford was able to connect on the field goal and put the Royals up 20-0 at the half.

The scoring continued for Woodbury as Parker Theis ran in for a 2-yard touchdown with 15 seconds left in the third quarter. Then, Wenzel found Mac Lockner in stride to score a 29-yard touchdown and give the Royals a 33-0 lead.

The defense continued showing their dominance with smart, aggressive football for all four quarters. The Royals came out and caused a three-and-out in Roseville's first drive of the game.

Woodbury didn't cause many turnovers on the defense except one by Sean Pugh-Sykora that gave the Royals offense great field position.

"Coach Roberts is the reason why this defense is so strong because he coaches to everyone's strengths and challenges you each day in practice to be the best you can be," said Joe Frommelt. "I think coach Roberts will be doing a dance in the locker room tonight."

A shutout means a lot to a defense, but for Woodbury, it means much more than usual. Hill has said many times throughout the last couple of seasons that this team relies on a strong defense and it's shown with a Metro East sub-district title last season and a possibly to repeat this season.

That repeat became more of a reality on Friday night with a little help from Woodbury's rival East Ridge. The Raptors were playing at Mounds View on Friday night and the Mustangs were also 3-1 heading into Friday's game.

Mounds View took the lead in the fourth quarter, but East Ridge was able to come back with an onside kick and win 41-40. When the final score was reported, the Royals locker room went crazy because they knew they had sole possession on top of the standings in the district.

The loss put Mounds View at 3-2, while Woodbury sits at 4-1 in the district. With the sole lead, the Royals have an opportunity to repeat as district champions this season.

"White Bear Lake is a good team and we have a short schedule to get prepared for them," Hill said. "We just have to continue what we did tonight and be well-rounded on Wednesday."

At the beginning of the season, the Woodbury captains said their goal was to win another district championship and get farther in the postseason than last year. Their first goal is right in front of them and they're excited to play on Wednesday for that championship.

After going 0-3 to start the season, Hill said each week was a championship week. That was the mentality that was in each of the player's heads after the loss to Mounds View.

That mentality has led to the Royals winning four straight district games and being on top of the standings with one game left in the regular season.

"This team has worked so hard during the season to get to this point and have a chance to compete for a championship," Wenzel said. "I'm just excited to see how the rest of the season unfolds for us."