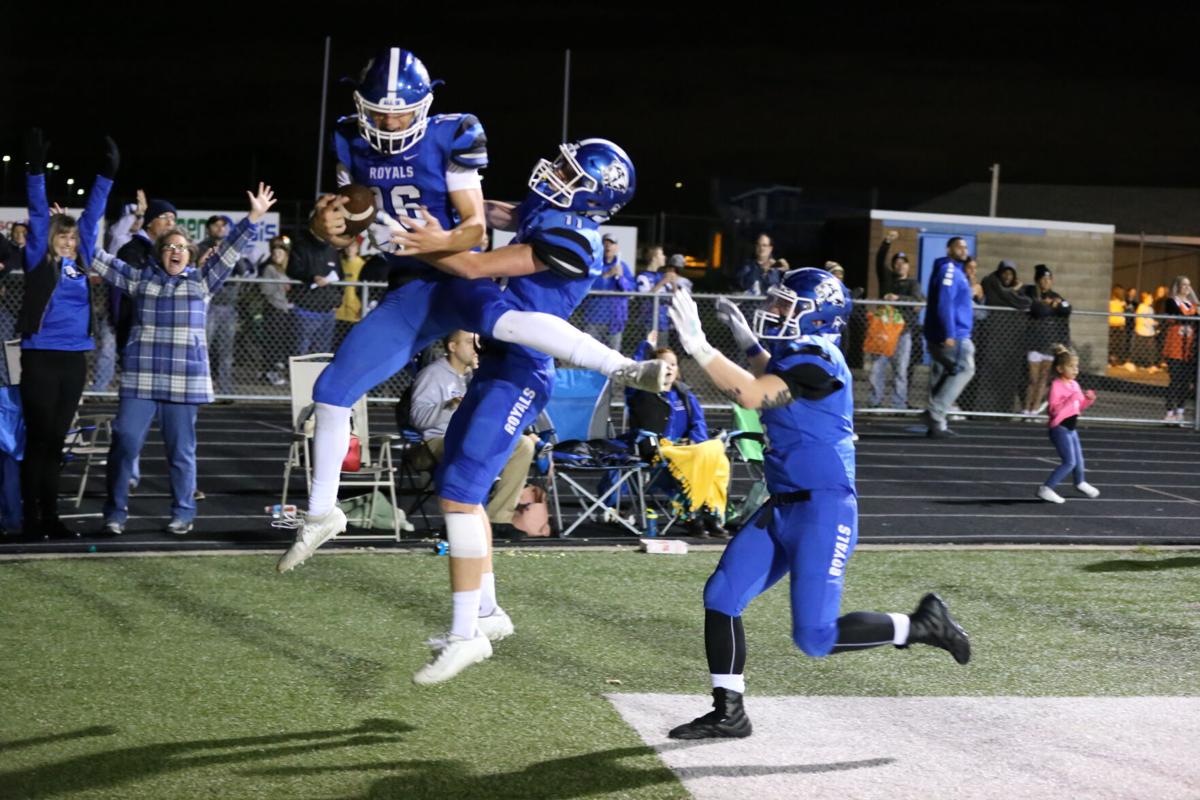 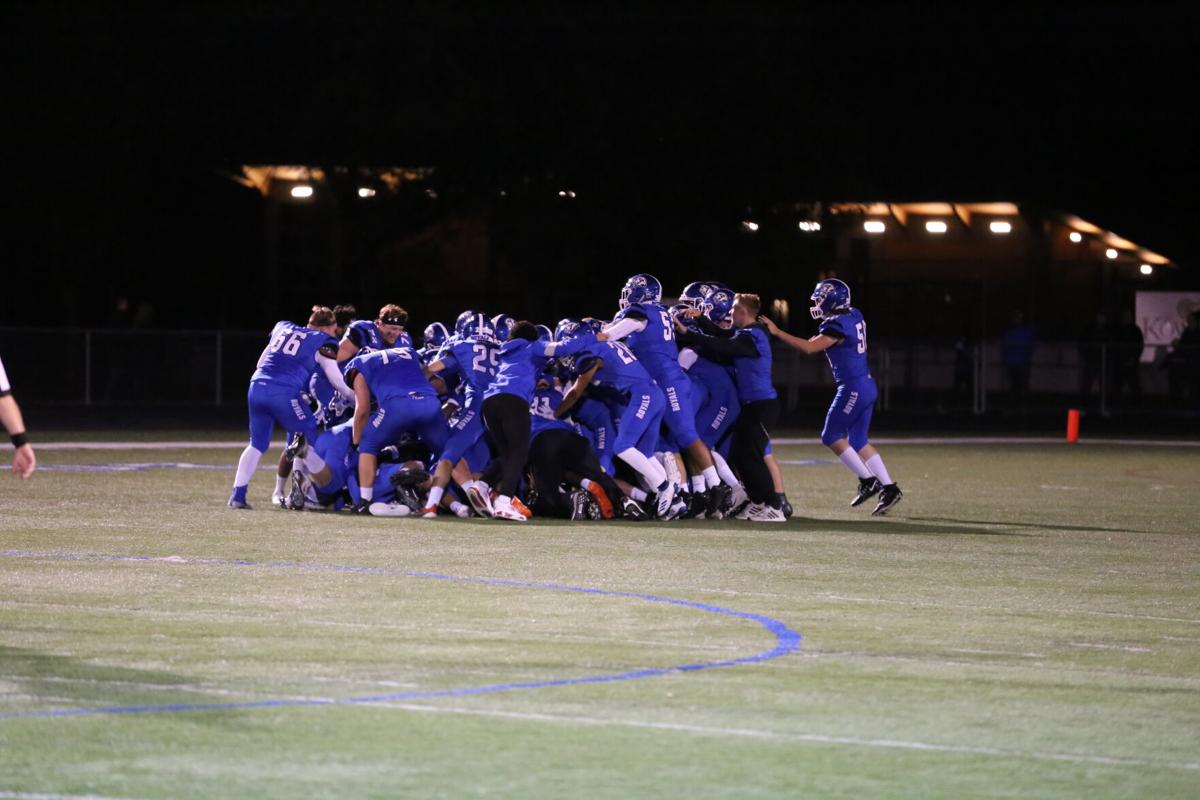 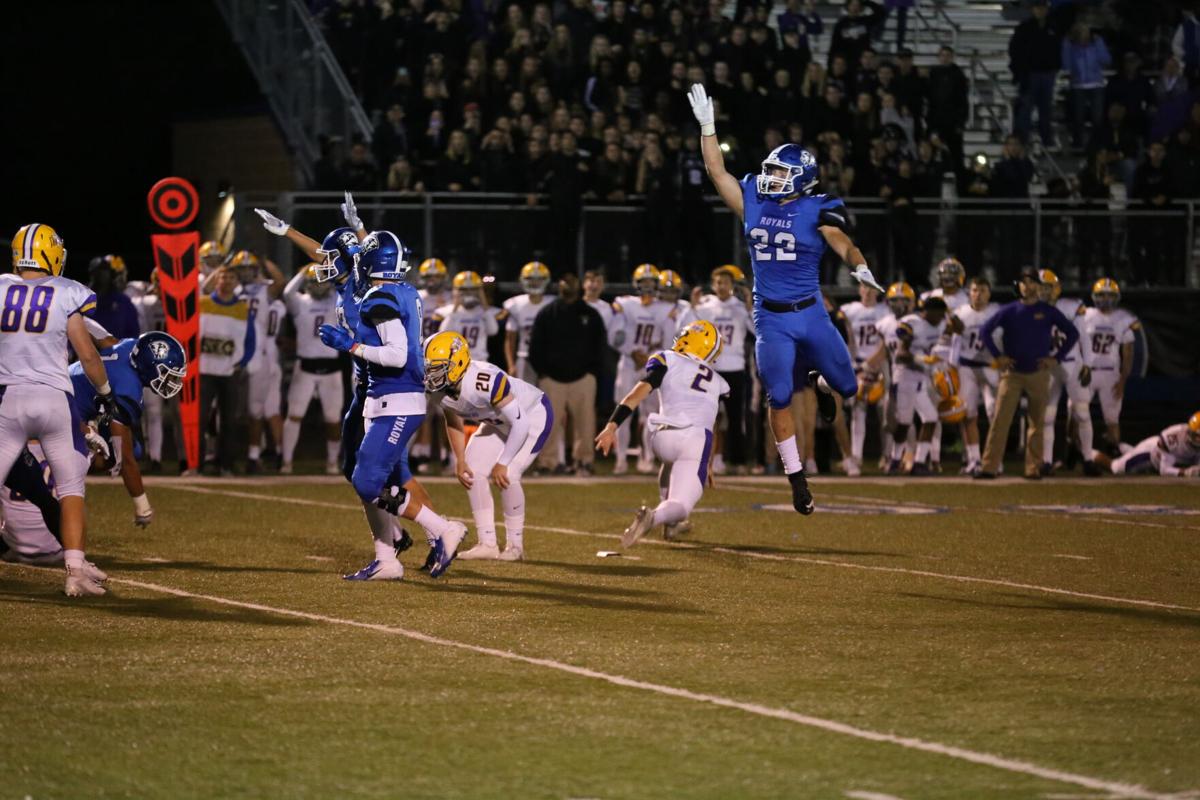 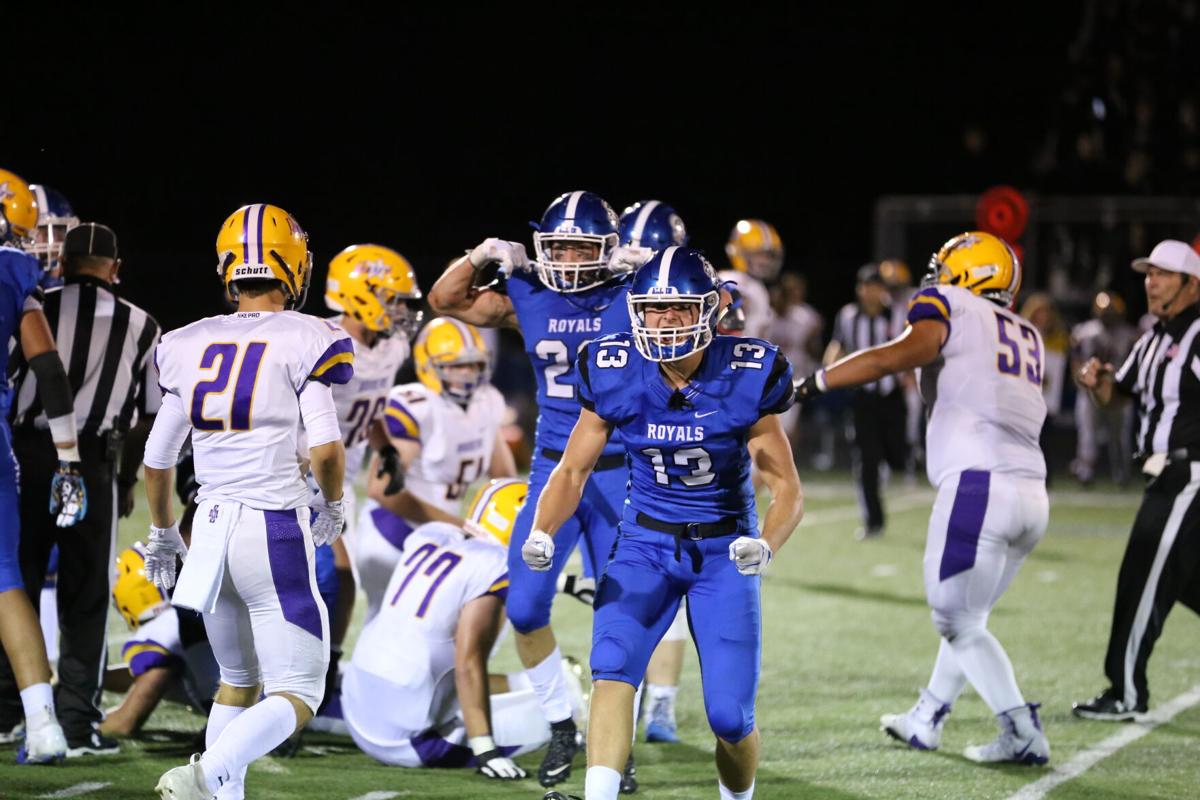 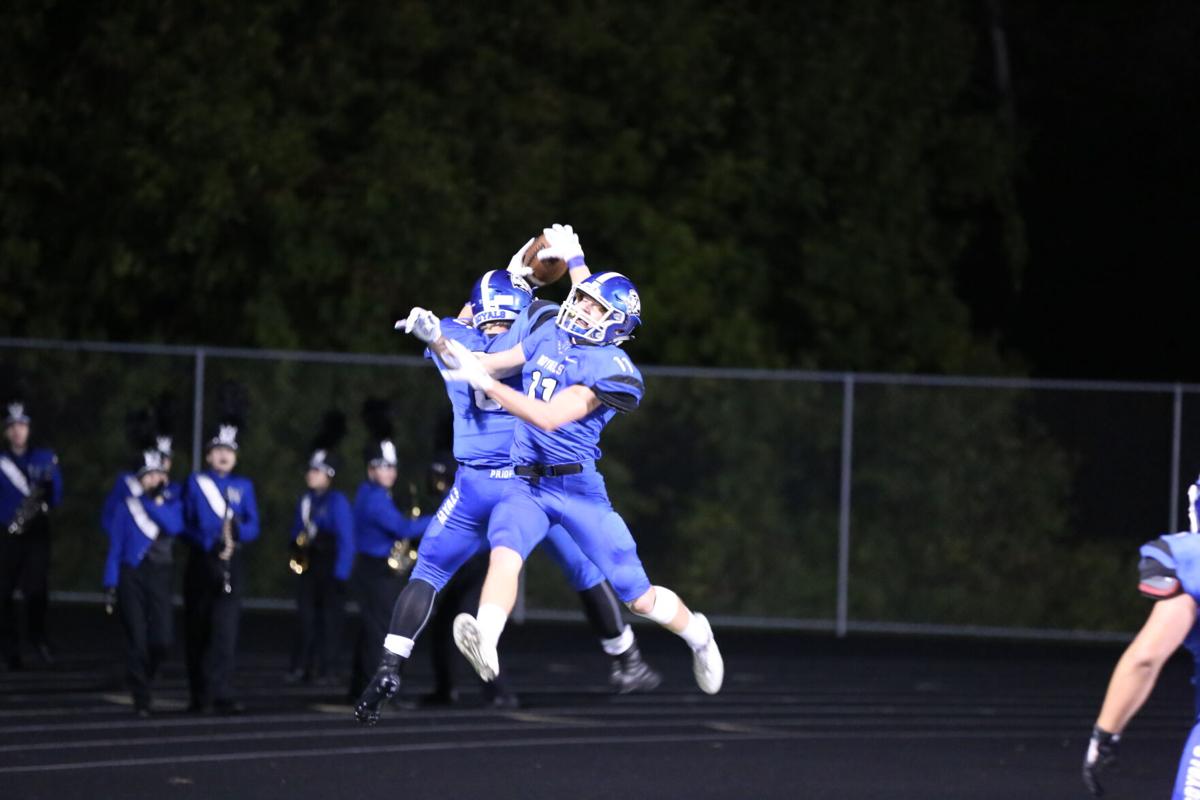 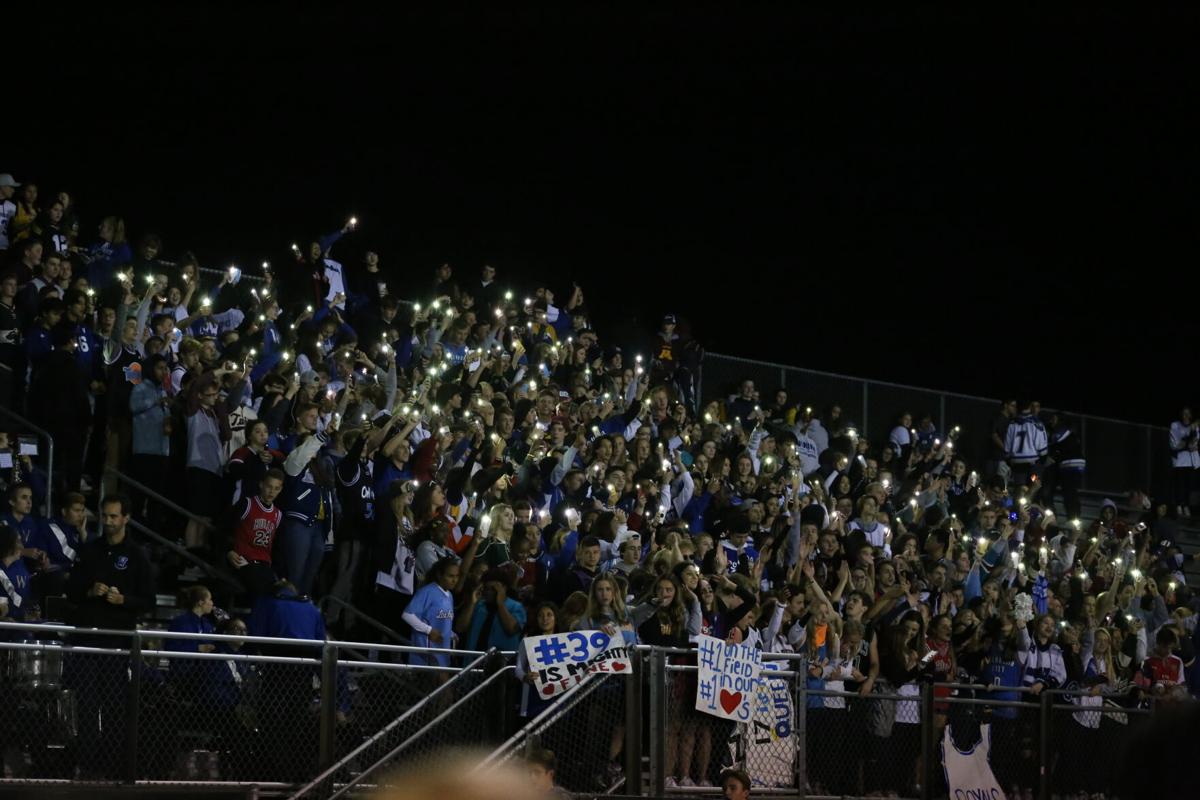 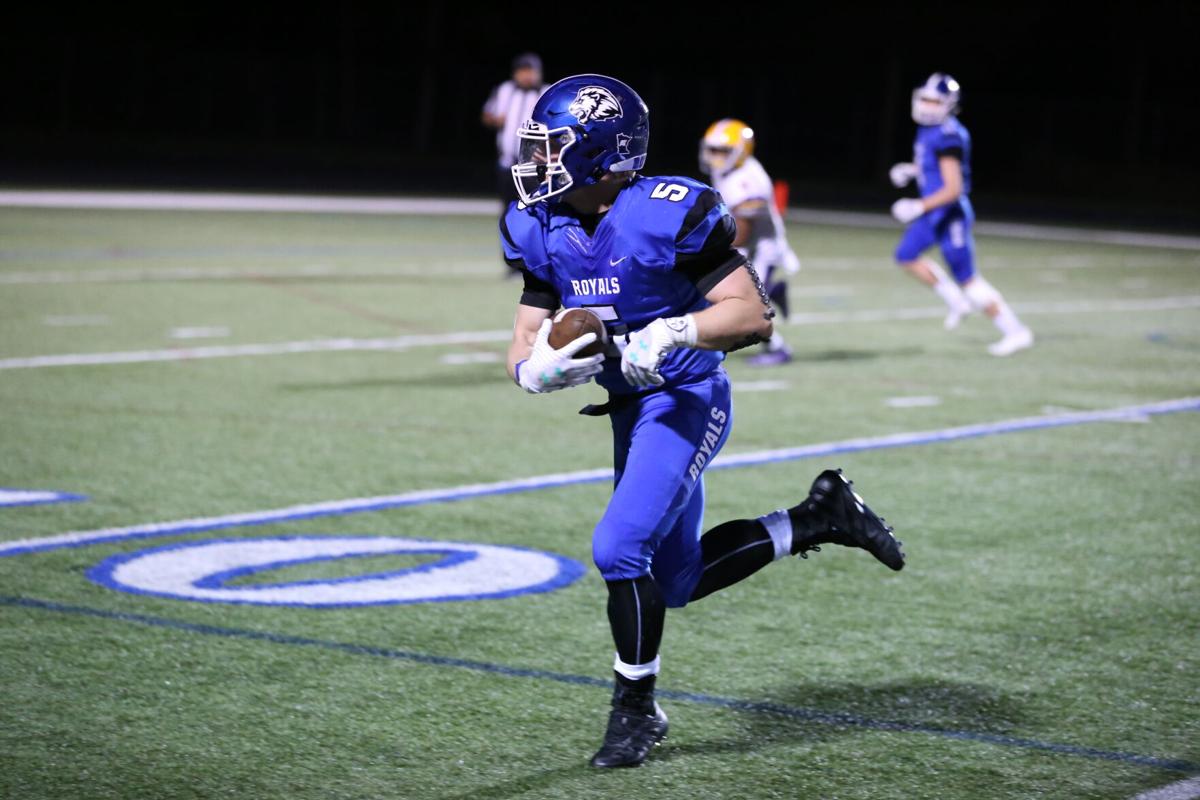 The Woodbury coaches were all crouching in anticipation for the final play of the game.

The kicker connected on the football with a strong leg, but the ball was stopped quickly as it went straight into a Raiders lineman to block the kick.

Joe Frommelt picked up the bouncing ball and returned it to about the 30-yard line to end the game. The scoreboard read 0.00 to end the game and Woodbury had held onto a 31-28 victory over a strong Cretin-Derham Hall team.

There were many hugs and high-fives exchanged between players and fans to fully capture the meaning behind this win for Woodbury.

“I’m so proud of these guys and being able to stay mentally tough until the very end,” Hill said. “It was a great team win and they showed their toughness for all four quarters tonight.”

To say it was a back-and-forth game would be an understatement as Woodbury and Cretin-Derham Hall showed the quality of teams in the Metro East district.

Hill said, before the game, that earning the first points of the game would be crucial for the victory. Cretin-Derham Hall earned the first points with a 21-yard touchdown pass in the middle of the first quarter.

It seemed that the Raiders were taking control of the game, especially after intercepting Charlie Wilson’s pass in the red zone to start the second quarter. Instead, the Royals defense stepped up as Tyler Christensen initiated and recovered a fumble to allow the Woodbury offense to return to the field.

"It was a big momentum boost and coach Roberts always tells us to attack," Christensen said. "I just saw the opportunity to get the ball and took advantage of it."

That fumble recovery led to a 30-yard touchdown pass from Wilson to Brock Rinehart, but the extra point wasn't good and allowed Cretin-Derham Hall to have a 7-6 lead.

That score started a back-and-forth scoring frenzy to end the first half as the Raiders led 21-17 at the half. Cretin-Derham Hall came back and scored to extend its lead on a 54-yard touchdown to make it a 14-6 game.

The next possession, the Royals fly down the field and score on a 22-yard rushing touchdown by Rinehart. Woodbury decided to go for the two-point try and Rinehart was able to punch it in for the score. The game was all tied up at 14-14.

The Raiders weren't done scoring though as they came down the field on the very next possession to score a 22-yard touchdown and take a 21-14 lead. That score didn't end the half as Woodbury came back down the field and reached field goal territory for Devin Padelford.

Padelford lined up for a 35-yard field goal and kicked it through the uprights to make it a 21-17 game in favor of Cretin-Derham Hall as time expired for the first half.

The third quarter was the complete opposite of the second quarter as the defense played a big role on both teams. There was no score for the majority of the third quarter, but the Woodbury defense stepped up as Christensen recovered another fumble to give the offense good field position.

With about three minutes left in the third, Wilson found an opening and went off to the races. He scored a 63-yard rushing touchdown to give the Royals a 24-21 lead heading into the fourth and final quarter.

That lead was held throughout the majority of the fourth quarter until the Raiders defense earned an interception to give their offense strong field position. After a few plays, Cretin-Derham Hall's quarterback found a receiver in the end zone. The receiver caught the ball close to the ground and the referee ruled it a touchdown to give the Raiders a 28-24 lead with a little under two minutes left in the game.

The Woodbury sideline and fans went crazy as many of them believed the ball touched the ground before being caught. Even with the frustration, Hill knew the call was made and the team had to focus on overcoming it and earning the win.

"We don't focus on the past, but rather on the next play ahead," Rinehart said. "We were able to focus on that next drive to take the lead back and I couldn't be happier with how this team played and fought for this win."

On the next offensive possession, the Royals were going down the field gradually when all of a sudden Wilson found Mac Lockner for a large gain. Woodbury was able to get the ball to the Raiders' 7-yard line and Wilson found an opening on the outside.

He ran around the corner and ended his run in the end zone to earn the go-ahead score and put Woodbury up 31-28 with 42 seconds left in the game. After scoring, the entire Woodbury offense ran over and celebrated with Wilson.

The only thing the Royals needed now was a stop from their defense. Cretin-Derham Hall started its drive back in Raider territory, but they were able to make some long passes to get onto Woodbury's side of the field in a quick manner.

With eight seconds left in the game, the Raiders quarterback found a receiver on the sideline to put Cretin-Derham Hall in field goal range. The kicker came out and prepared for a 34-yard field goal, but kicked it straight into one of the offensive lineman to end the Raiders' chances to winning the football game.

"I was so happy after that block and knowing we were able to get the win," Wilson said. "It was a hard-fought game, but our entire team was able to work together to earn this win."

This type of win can form momentum and confidence, which Hill and the players hope for especially heading into a big week next week. The Royals will prepare for a rivalry game on Friday, Oct. 4, at 7 p.m. as Woodbury travels down the road to East Ridge.

The players and coaches understand what this game means for this community and the city of Woodbury. It's also going to be Tackle Cancer night and both teams will be participating in raising money and awareness throughout the week.

Hill said he looks forward to this game because it brings the Woodbury community together and those rivalry games are always important to a program in any sport.

As for Friday's game, Hill had a lot of emotions throughout the game, but ultimately he was proud of the way these players have changed from boys to men during the season.

"Boys get to become young men through football and I think things like this test your character," Hill said. "You learn a lot regarding football and life during these games and that's the fun part for us as coaches to watch all season."