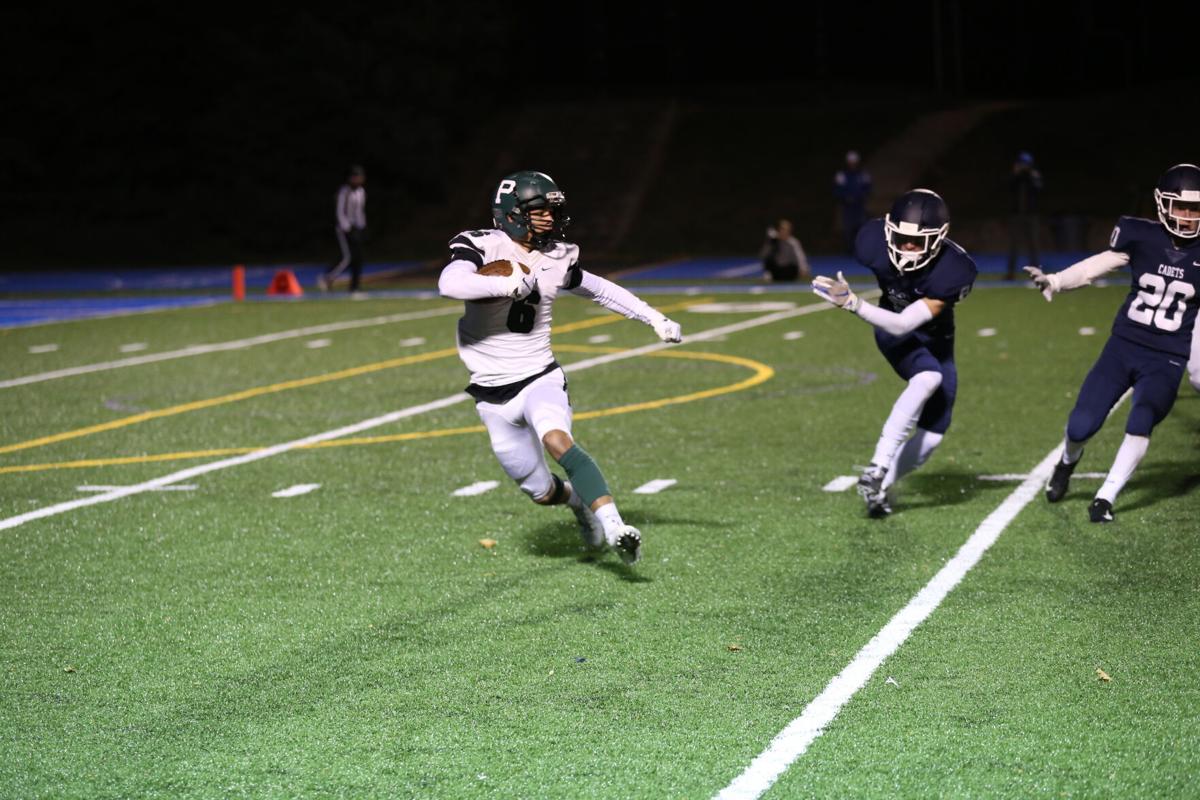 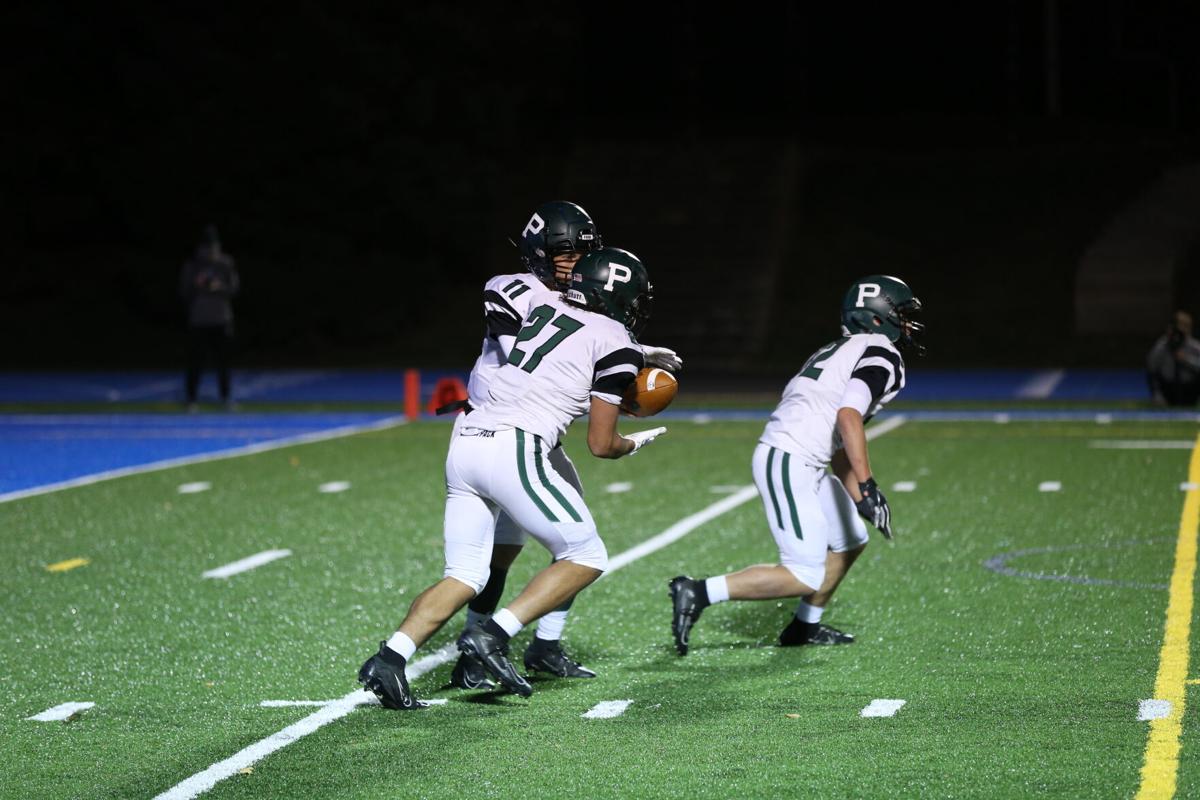 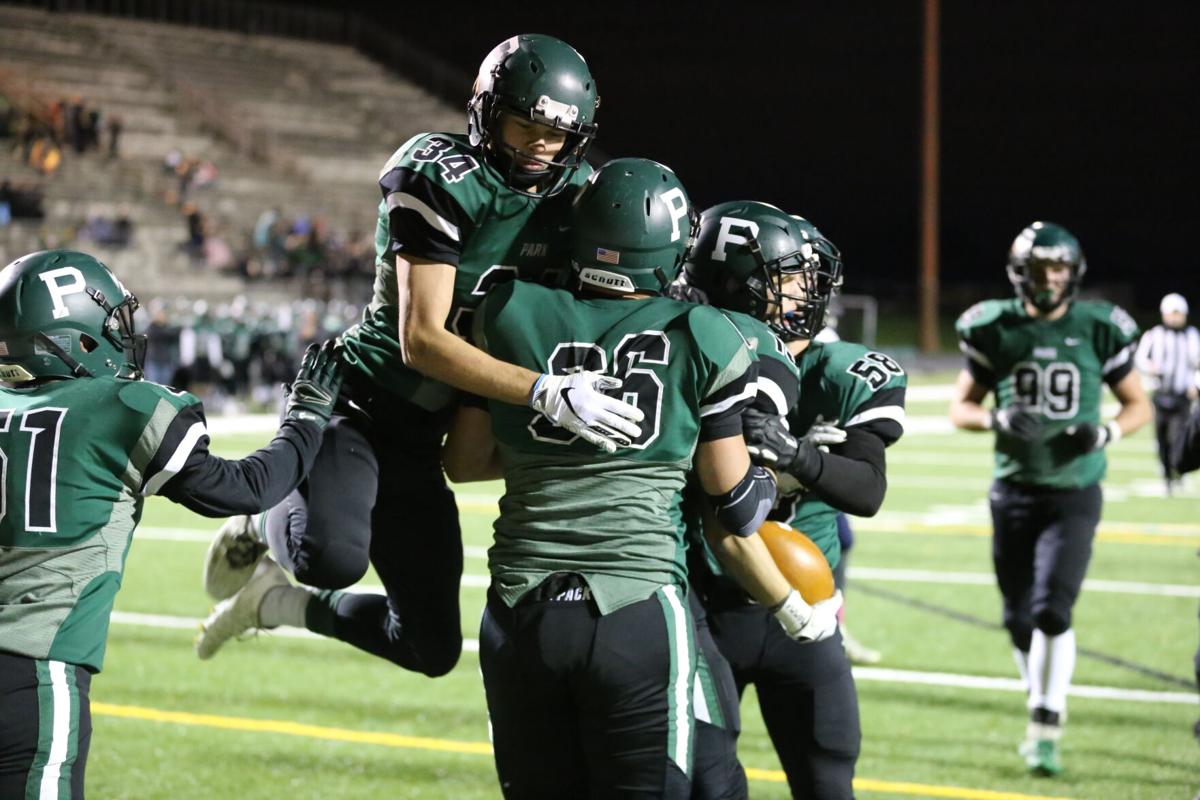 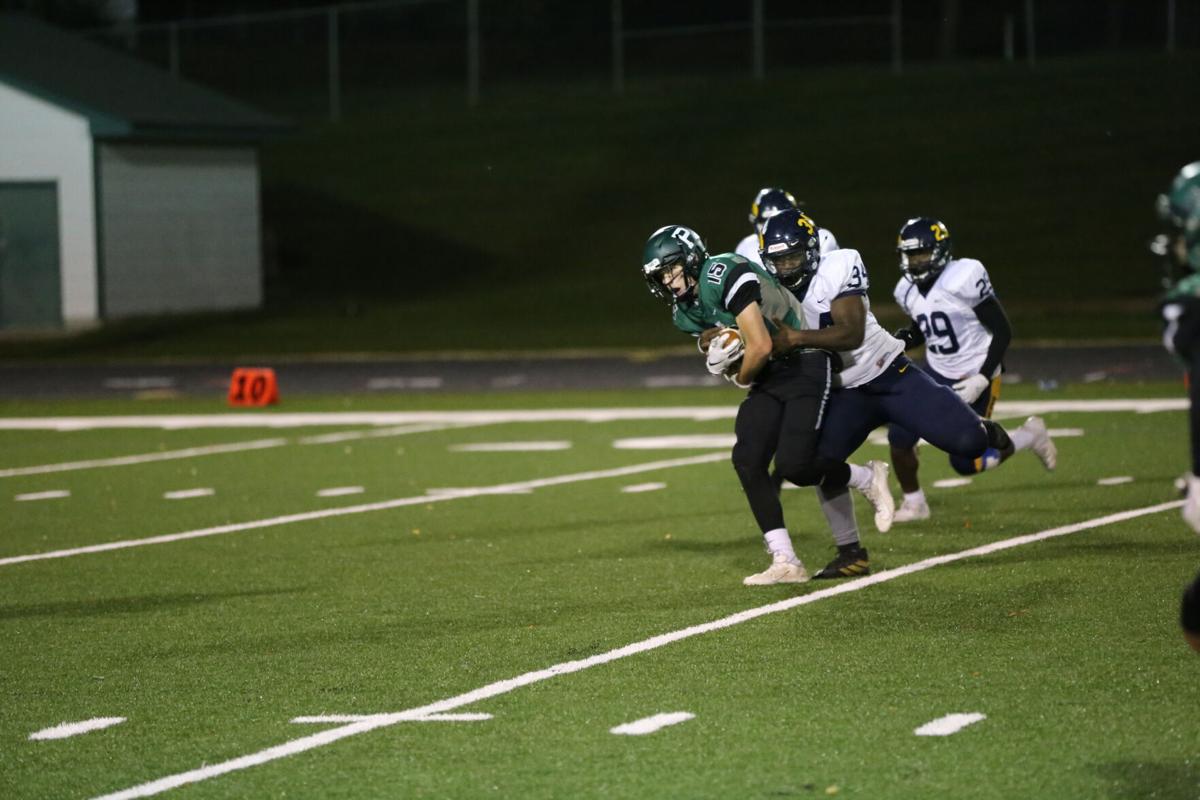 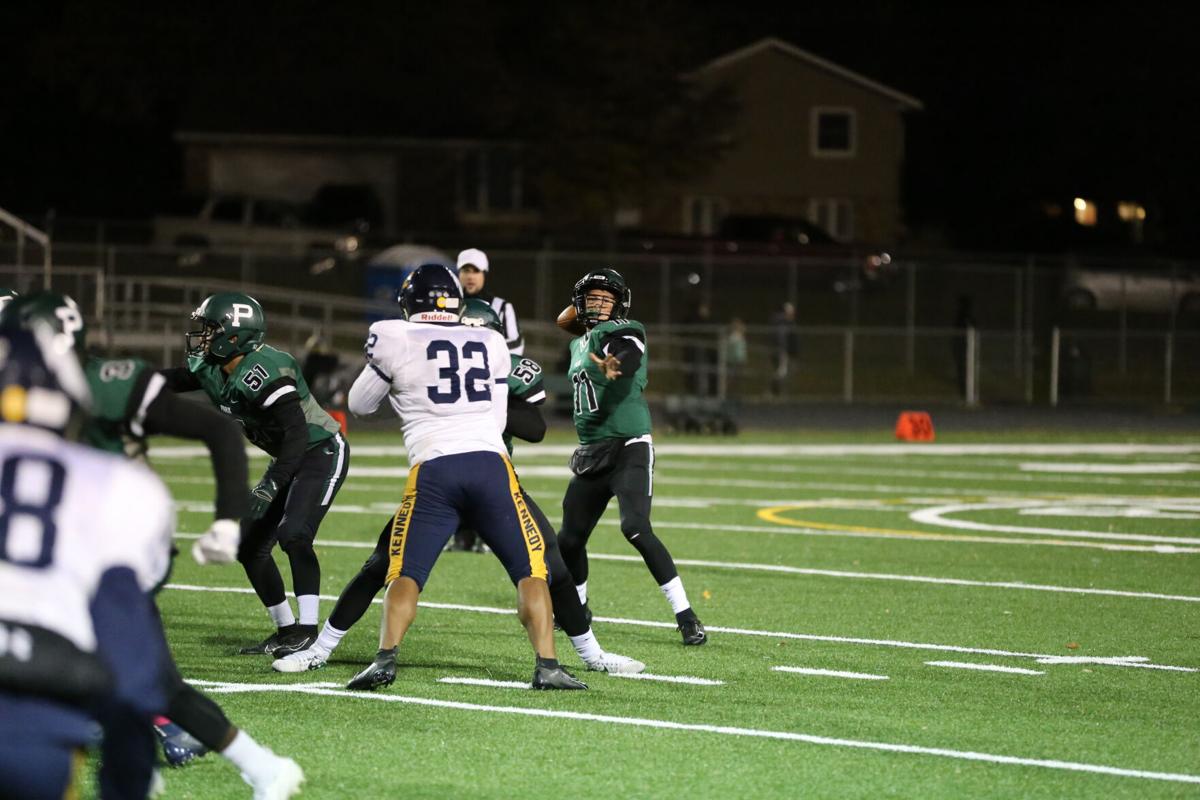 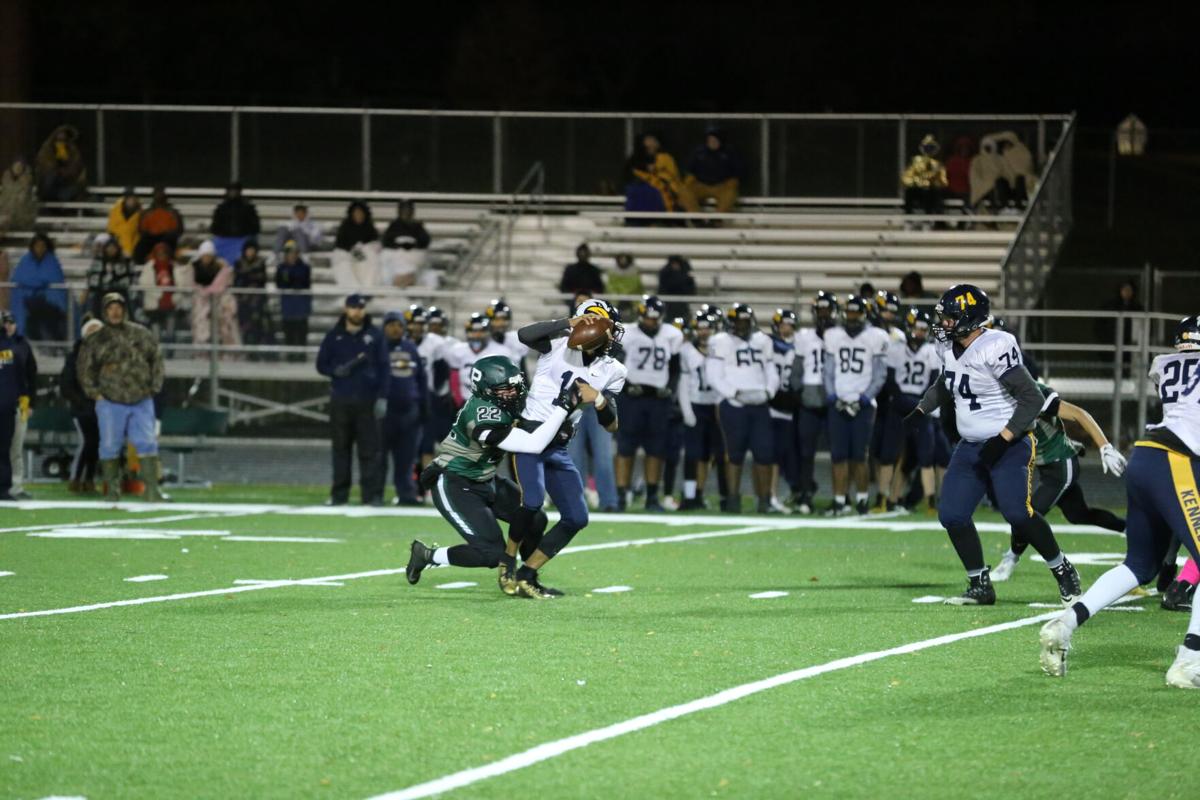 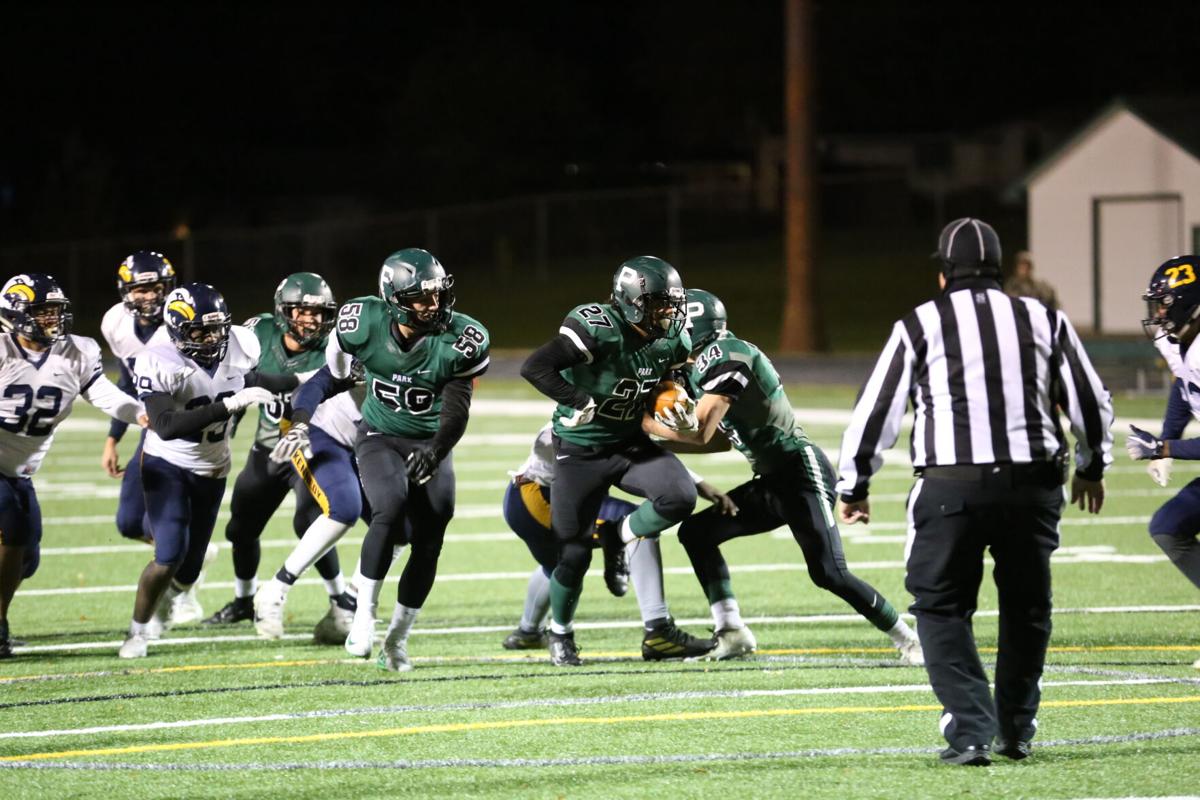 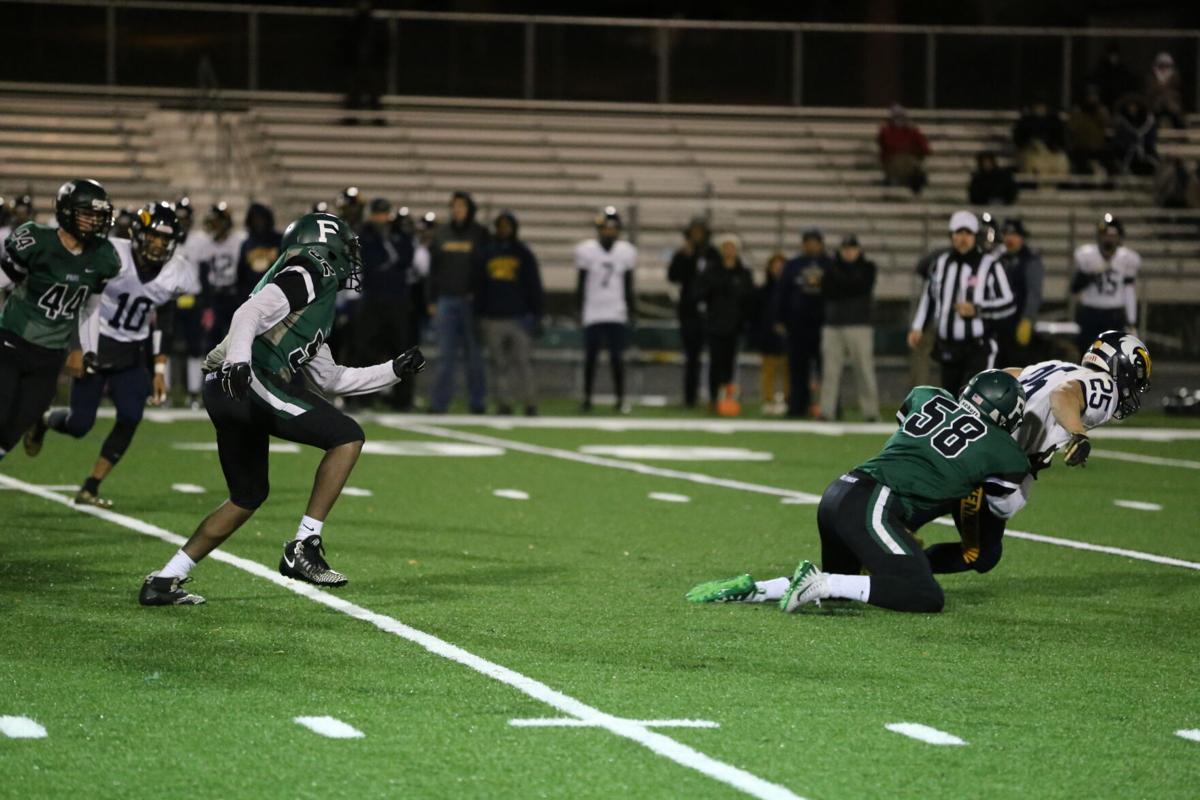 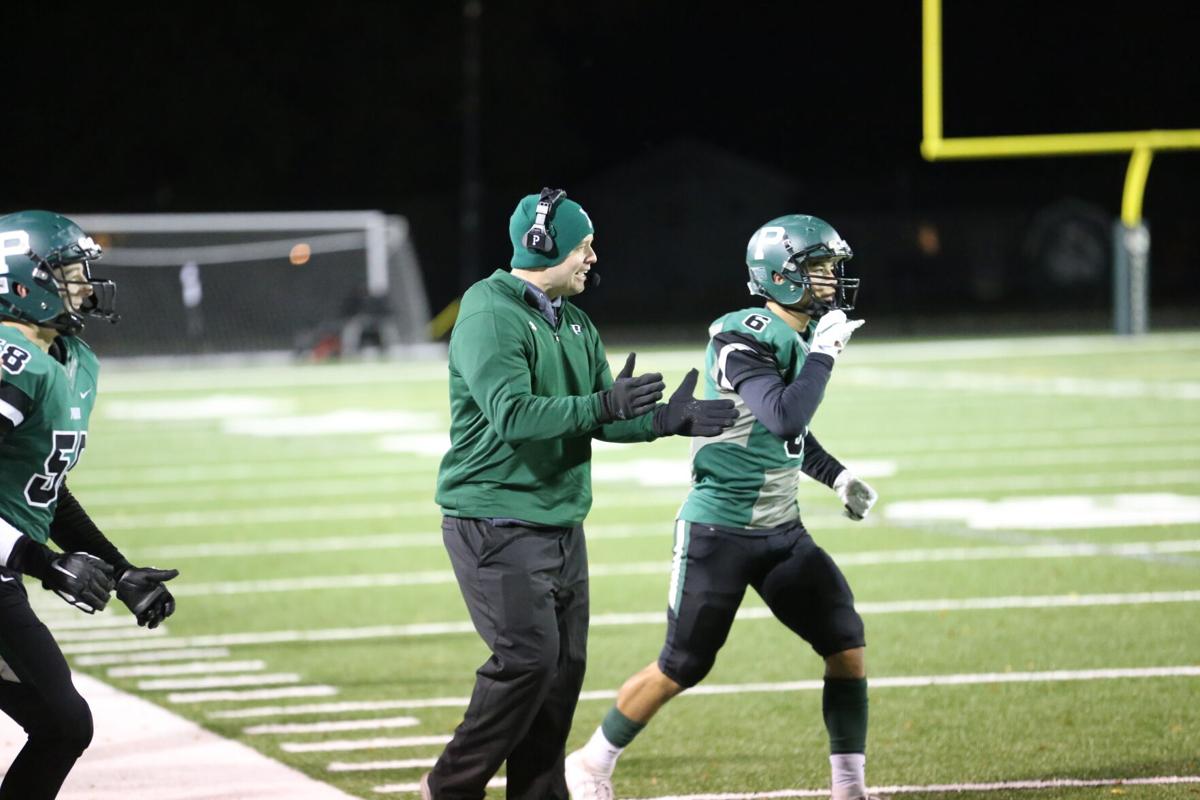 It’s a word that many Park players have said throughout the season.

That family of Wolfpack players was shown on Saturday night.

The No. 4 seed Park traveled to No. 1 seed St. Thomas Academy in the Section 3AAAAA semifinals and lost 49-0 to end the Wolfpack’s season.

Even though the night ended in a loss, the Park sideline felt like a family.

Each player was picking another player up and motivating the offense and defense on the sideline. The Park athletes were helping each other up after getting tackled on the field.

When the game was out of reach in the fourth quarter, the Park sideline was cheering on some of the future leaders of this team in the 2020 season.

Every Wolfpack has an arm around each other at the post game huddle and hugged each other knowing this was the final day of the 2019 season.

The loss hurts, but for head coach Rick Fryklund, the opportunity to have another week of practice and share more memories is what hurts the most.

“There was a lot of change this season with a new coaching staff, new schemes and a new formations,” Fryklund said. “These players embraced all the change and made this season memorable.”

After Tuesday's win against Bloomington Kennedy, Fryklund and the players knew it was going to be a tough battle at St. Thomas Academy. To add onto the tough match up, the Wolfpack played on Saturday without senior leaders Carson Kons and Max Giannini.

The first half of the game consisted of touchdown after touchdown for the Cadets as St. Thomas Academy had six drives in the first two quarters and all six drives resulted in a touchdown.

On the other hand, Park had six drives that all resulted in a punt in the first half. St. Thomas Academy led 42-0 after two quarters and halfway through the third quarter there were plenty of changes for each of the teams.

The Park coaches were able to put players into the game that will be part of the Wolfpack's future in the 2020 season.

"This season has been so memorable and a lot of fun," said Jacob Langevin. "I was honored to be a captain this year and build a family with these players. The friendships and brotherhood we made as a team is what I'm going to miss most from this year."

Fryklund can't thank the seniors enough for the smooth transition into the head coaching role. He knew it was going to be a transition, but these seniors have shown leadership on and off the field as well as shared fun memories with the first-year head coach.

After the loss on Saturday, Fryklund gave hugs to each of the seniors and also the majority of the team because he appreciates them buying into the system and representing Park football in the best way in school, in the community and on the field.

Fryklund also added that he also appreciates the support of the Cottage Grove community and how many people have come out for Friday night football each week during the season. Along with the games, he's seen plenty of people in the community and he's received good wishes and only positive feedback from each community member.

"The Cottage Grove community has made this transition so smooth for my family and myself this year," Fryklund said. "I can't thank them enough for their support in the program and their support for these players and coaches."

The Park team will say goodbye to 25 seniors this year, but Fryklund will have a strong junior and sophomore class coming up to take over those leadership spots.

Even though Fryklund wants to savor these last few moments of the 2019 season, he's excited to see what the offseason will be like and how it'll shape the team for the 2020 season.

"Even though wins are fun and memorable, there are so many other memories I'm going to remember from this season," Fryklund said. "The moments at practices and the dinners before each game, those are the moments that are going to stick with me."

The section playoffs started up for the Park football on Tuesday night and the Wolfpack were able to host their first round game at Wolfpack Stadium.

It was a battle for the entire game, but a late push by Park in the fourth quarter allowed the Wolfpack to seal the 27-12 victory over No. 5 seed Bloomington Kennedy on Tuesday night. This win puts the No. 4 seed Park into the section semifinals on Saturday.

"Not many players can say they won their last home football game of their career," said head coach Rick Fryklund. "This group of seniors can say that though and I'm just proud of the entire team's fight to earn this victory."

The game started off close as the first half ended in the a 7-0 lead for the Wolfpack. The only touchdown came from a pass by Jake Kuemmel to Nathan Hadler for 14 yards and Kaden Johnson connecting on the extra point.

That score came with 49 seconds left in the first quarter and the Park defense was able to show their strength by stopping and shutting out Bloomington Kennedy for the first two quarters.

The two of them never returned to the field and the Park offense and defense looked for players to step up in their absence.

"It's always hard to see two of your leaders go down during the game," Kuemmel said. "But there were players that stepped up and took over to make sure we won this game."

Hadler and Kuemmel stepped up offensively to help extend the lead for the Wolfpack as they connected for another touchdown in the third quarter for 19 yards to make it a 14-0 lead for Park.

Defensively, the Wolfpack had to change up formations and pressures from the first half to the second half because Bloomington Kennedy changed their strategy offensively. Fryklund said it was a change that they were anticipating, but he was happy with how they quickly adapted to the formation changes.

"The quarterback was very versatile during the game," Hadler said. "We just needed to make sure we had our assignments and followed them. We were able to do that and it helped us get the win tonight."

The onside kick went out of bounds, giving Park the field position needed to run the clock and hold onto the victory. A couple plays into Park's offensive drive, Ezekiel Brown-Knott found a lane and scored a 45-yard rushing touchdown.

"I was just happy to score and give the team a larger lead," Brown-Knott said. "The offensive line made a hole for me to run through and I was able to get into the end zone."

Johnson missed the extra point for Park, which meant the score was 20-12 in favor of Park so Bloomington Kennedy could tie the game up with a touchdown and a two-point conversion.

During the Eagles last drive of the game, there was a throw that landed right in the arms of Park's backup linebacker Matthew Boche and he returned the ball 65 yards for a touchdown to make it a 27-12 victory for the Wolfpack.

"For Matt Boche, a backup linebacker, to come in and say 'I'm ready to go' and get that big play, I'm happy for him," Fryklund said. "He's one of those kids that's going to give you every ounce that he's got for the entire game."

The biggest takeaway from the night for Park was flags and fumbles. Kuemmel and Hadler agreed that the Wolfpack committed too many penalties in the game and those can hurt field position and drives because the team can't move forward on the field. Defensively, those penalties can give the opponent's excellent field position and keep their offense out longer with new first downs.

The team will look at film this week and develop ways to prevent those flags to occur so often in the semifinal game. The fumbles can end offensive drives and give the opponent's strong field position, so Kuemmel said the offense needs to focus on holding onto the ball and minimizing turnovers.

The other takeaway from Tuesday's game is the idea of possibly playing without Kons or Giannini after their injuries in the first half. Fryklund didn't know the full extent of the injury after the game, but he did say that he doesn't anticipate the two of them to be back and ready to play on Saturday for the semifinal game.

"I'm not anticipating them coming back right now," Fryklund said. "I know Carson will need some X-rays and Max is probably out, but I told them that I loved them, gave them both a big hug. I'll do that again because they played a big role in what we did this year.

"So not anticipating them coming back for STA, which is already a very tall chore, but we're going to tell our kids that the only thing we can control is playing as hard as we can."

The Wolfpack will head to No. 1 seed St. Thomas Academy on Saturday, Oct. 26, at 7 p.m. for the section semifinal game. The Cadets are 7-1 this season with the only loss coming from Chaska at the end of the regular season.

Park played St. Thomas Academy at Wolfpack Stadium on Friday, Oct. 4, for the Wolfpack's homecoming and lost 35-0. The coaches and players learned from that game and hope to use their knowledge to fight against the Cadets on Saturday night.

"They are a strong and physical team," Kuemmel said. "We just need to work together and fight every play. We're looking forward to playing on Saturday night."