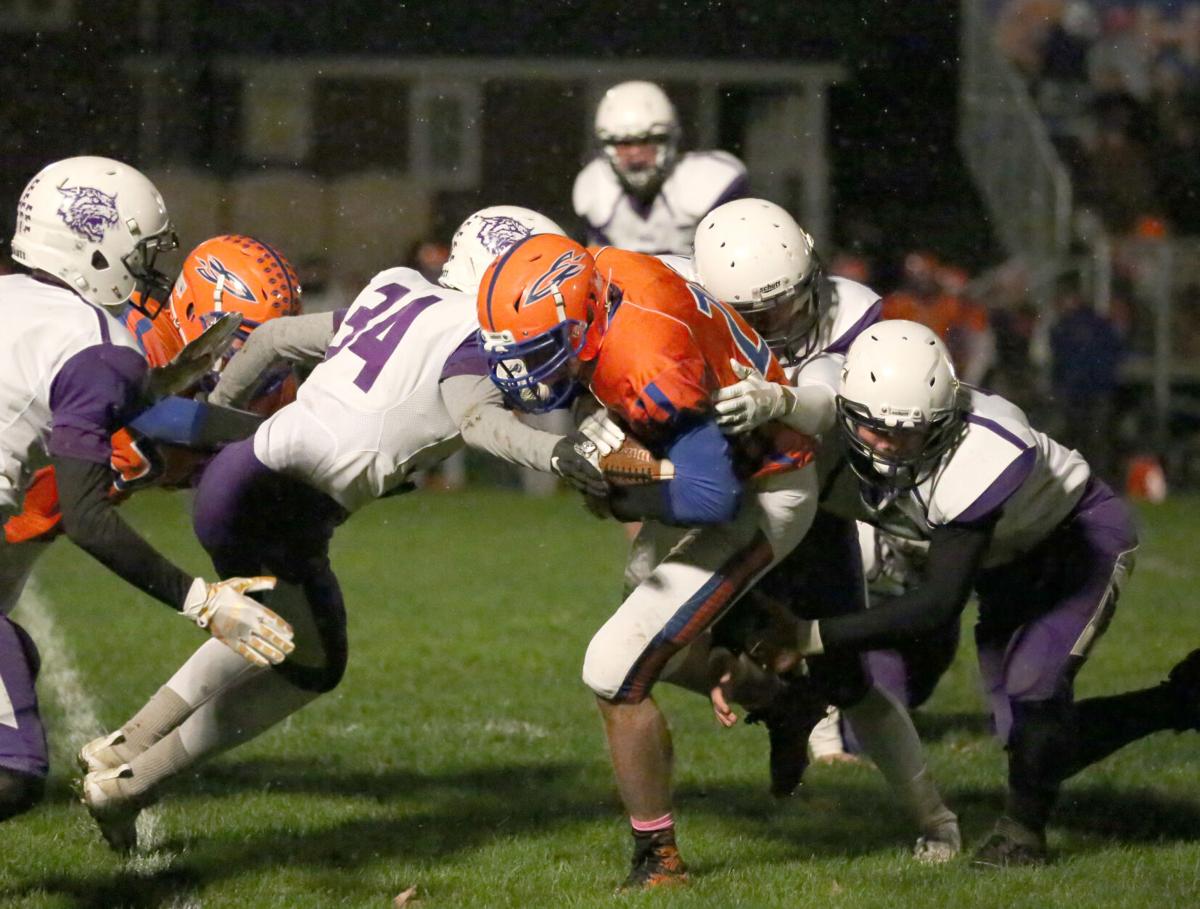 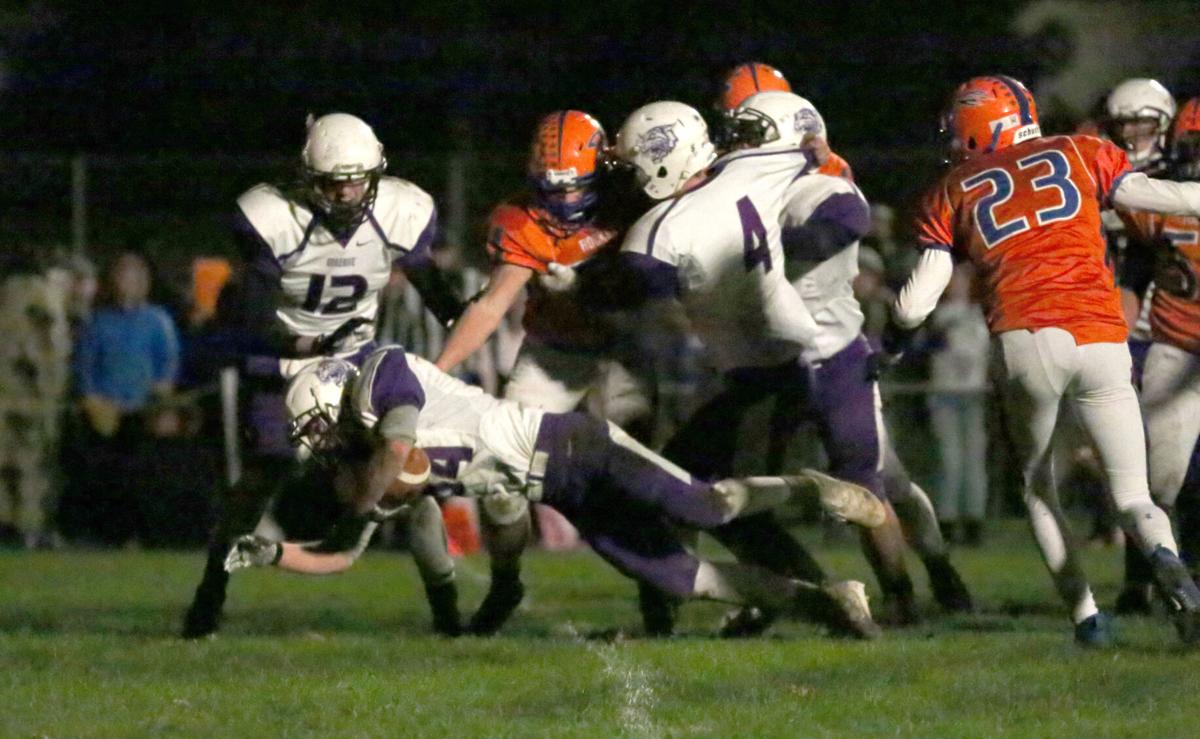 In bone-rattling conditions, Goodhue held off the big playmakers of Randolph and got just enough at the end to to come out on top Friday night.

Neither team gained much offensively and both defenses created enough turnovers to put more points on the board. Nevertheless, the Wildcats prevailed in a 12-6 win.

The Wildcats opened the scoring in the second quarter on a short run by sophomore Maddox O’Reilly. By game’s end, O’Reilly had 128 yards on a whopping 35 carries.

Filling in for junior running back Logan Ferguson, O’Reilly shouldered much of the run game for the Wildcats. Goodhue head coach Tony Poncelet was pleased with the body of work by his running back.

“Maddox stepped up and did a great job,” Poncelet said. “We knew that he would do this. He's a sophomore starting on defense. So we kind of want to get him settled into that and play him both sides.”

“It's not only me,” O’Reilly said when asked why he had such success. “It's my lead blockers making holes in the lines. I just hit the hole and go.”

The Rockets responded quickly to O’Reilly’s touchdown. On their next drive, Isaac Stoesz caught a ball on a slant, blew past four Wildcat defenders and took it 60 yards for the touchdown.

With neither team getting an extra point, the score was tied 6-6 with 7 minutes, 21 seconds left in the second quarter.

From then on, the two teams exchanged punts, turnover-on-downs, fumble recoveries and interceptions.

The Wildcats lost four fumbles, three of which were recovered by Rocket Kavin Blonigan. Isaac Stoesz lost a ball trying for a hook-and-ladder near the end of the first half. Rocket quarterback Nick Drinken threw three interceptions.

In total, the two teams combined for eight turnovers.

“I thought the defense did very well,” O’Reilly said. “We only gave up that one big play that they scored on.”

“They have athletic skill position guys and that was their biggest strength that we needed to stop,” Poncelet said.

For Randolph, the turnovers were costly.

Wildcat Sam Peterson picked off Drinken on a screen pass to Blonigan and returned it to the Randolph 20-yard line. Baxter O’Reilly converted the turnover into points with a 1-yard run for a touchdown, giving the Wildcats a 12-6 lead.

Conor O’Reilly secured the win with an interception of Drinken on a throw to Stoesz. With 2:06 to go in the game, the last interception sealed the Rockets’ fate.

“I thought defensively we played really well,” said Randoph head coach Mike Schmidt. “We caused turnovers, enough turnovers to put our offense in a good position and we just weren't able to capitalize. You can't blame the weather, they had to play in it too. We couldn't sustain drives.”

Goodhue (5-2), which has won its last three games since losing to Blooming Prairie on Sept. 20, next plays Kenyon-Wanamingo at home on Wednesday, Oct. 16. Randolph (5-2) finishes its season on the road against Bethlehem Academy.

Moving forward Schmidt said the key for the Rockets is better execution on offense.

“The execution wasn't where it needed to be,” he said. “Getting further into the season and the playoffs, execution is crucial. It has to be spot on and it wasn't tonight. That's why we came out on the wrong end on the scoreboard.”

For the Wildcats, it’s the running game.

“We're going to need to establish the run game early,” O’Reilly said. “Whatever happens from there, hopefully it (goes our way).”

“It's tough to move the ball in this wind,” Poncelet said. “If you don't have a running game in the fall in Minnesota it's tough going.”

For the first time since 2005, Cannon Falls defeated Rochester Lourdes.

Lourdes scored first with a 94-yard touchdown midway through the second quarter. The Bombers scored with 1 minute, 3 seconds remaining in the first half on a 4-yard run by Jack Dommeyer.

Despite Dommeyer's touchdown, the Eagles still had the lead as the extra point by the Bombers was blocked. The score stood at 7-6 until 6:43 in the fourth quarter. Trenton Matthies scored the eventual game-winning touchdown on a 7-yard run.

Matthies finished with 53 yards on 14 carries. Dommeyer led the Bombers with 58 yards on 16 carries. Marcus Banks added 42 yards on 11 carries and Braxton Ulrich carried the ball eight times for 46 yards.

Undefeated and No. 8 in Class AAA Cannon Falls (6-0) travels to fellow undefeated team and No. 5 in Class AAA Stewartville (6-0) to finish the regular season on Oct. 16.

Stewartville's Josh Buri opened the scoring with his first of four touchdowns on a 99-yard run less than 2 minutes into the game. The Tigers scored twice more in the first quarter, then added two more touchdowns in the second.

At the half, the Tigers led 32-0 and never looked back.

A special teams turnover gave the Knights a spark in defensive game. Jed Johnson knocked the ball loose from Medford's punt returner. Bray Olson recovered the ball at the Medford 4-yard line. Knights quarterback Luke Berg ran in from the 2-yard line to go up 7-0.

Later in the fourth quarter, the Knights finished off a drive with a touchdown to secure the win.

Both teams almost exclusively ran the ball, but neither team was able to gain much. Medford out-gained the Knights on the ground 164-105.

Unlike most other Minnesota football games Friday night, Zumbrota-Mazeppa and Dover-Eyota had little issue putting points.

The Eagles held a 7-6 lead after the first quarter, then the Cougars offense took over. The Cougars out-scored the Eagles 24-13 in the second. Calvin Voxland ran for two touchdowns and Beau Jurrens added another on the ground.

Each team exchanged a touchdown in the third and the Cougars put the finishing touches on the game with two more in the fourth.

It was a great day for Cougar rushers as the team ran for 346 yards. Voxland led the way with 150 yards on 24 carries and four touchdowns. Quarterback Willie Holm had 131 yards on 10 carries and Jurrens finished with 44 yards on three carries.

Panther quarterback Carter O'Reilly fumbled a ball on a sack in the first quarter. The Warriors recovered and returned it for a touchdown.

The Warriors scored twice in the second quarter, then scored again in the third and fourth.

The Panthers were held to 190 yards of total offense. Panther Dylan Holzer went 8-for-19 for 94 yards and Max Owen ran the ball 17 times for 62 yards.