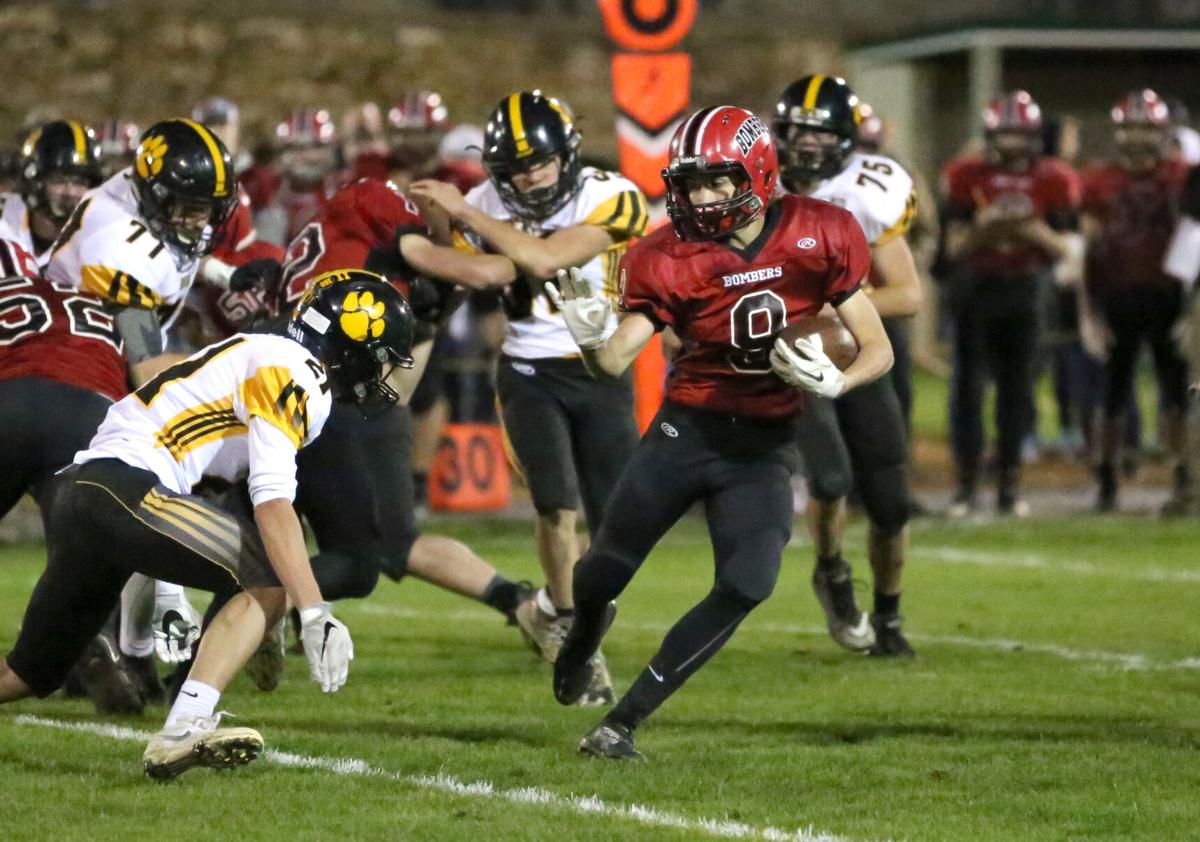 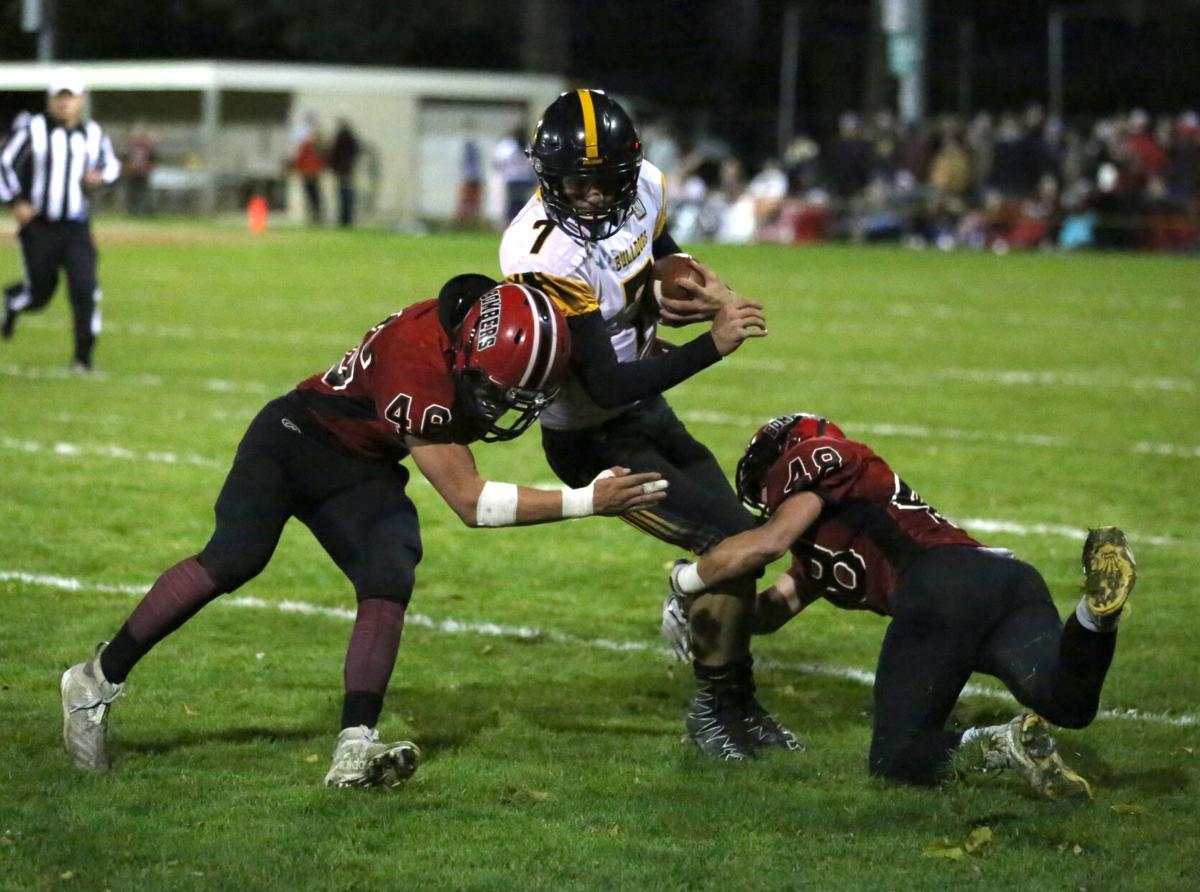 Facing its toughest test to date this season, Cannon Falls got an early lead and held steady for the win.

The Bombers beat the Plainview-Elgin-Millville Bulldogs 18-6 Friday night in front of a packed homecoming crowd at John Burch Park.

The run game again led the way for the Bombers, but the Bulldogs forced Bomber quarterback Jack Dommeyer to throw considerably more than any previous game. Coming into Friday, Dommeyer had thrown just 10 times in the previous four games. Against PEM, he threw nine times.

“They stopped our run game pretty well and we weren't able to get the big explosive plays that we usually can,” said Cannon Falls head coach Dan Meyers when asked what challenges the Bulldogs presented. “We had to grind out long drives.

“That's the tricky part is when you play a team you haven't played for a few years, so we don't know exactly how they are going to play us defensively. I think our guys did a nice job.”

The Bombers opened the scoring on its first drive. The defense got a stop then the Bomber offense took over again with 6 minutes, 45 seconds remaining in the first quarter. It took the remainder of the quarter and 3 seconds of the second to score.

The Bombers utilized nearly all their varsity running backs as no one back had the majority of the carries. Senior Braxton Ulrich capped off the time-consuming drive with a short run, giving the Bombers a 12-0 lead.

“(Braxton) is one of our hardest workers (on the team),” Meyers said. “We spread the ball around. That's what's cool about this system is that we can give the ball to different guys (with success).”

The Bulldogs contained the Bombers offense and forced them to punt the remainder of the second quarter and into the third. The Bulldogs in the meantime got on the board with a touchdown pass over the middle inside the red zone.

The 12-6 Bomber halftime lead was mostly due to the two defenses doing their part. The Bombers held the Bulldogs to -8 yards on nine carries and 50 yards total in the first half.

The Bomber defense as a whole unit played arguably its best game this season during a game when it needed to.

Grant Mech came up with a huge interception on a deep ball in the third quarter. Mech’s pick gave the Bombers the ball and some much-needed momentum for a team that looked stagnant.

“(Mech) did such a nice job of doing what he was coached to do,” Meyers said about the play. “He stayed right on that guy's hands and went for the ball at the right time. It was him and that guy one-on-one and there no (help defensively). It was one of those situations where you need a guy to step up and he did it.”

Another long drive by the Bombers ended in a Trenton Matthies touchdown run from less than a half yard out. Ulrich was again involved as he set up Matthies with 7-yard gain the previous play. The touchdown gave the Bombers some breathing room. The defense came out with one last stop. A holding call took back a would-be touchdown for the Bulldogs. The Bombers forced four straight incompletions and a turnover on downs to wrap up the victory.

Cannon Falls (5-0) remains at home Friday, Oct. 11 as the defending Class AAA champion Rochester Lourdes Eagles come to town. The Eagles present a challenge to the Bombers in terms of the team finding out where it ranks among the best in Class AAA.

“It's been a long time since we've beaten Lourdes,” Meyers said. “We know we are a good team. We're definitely above average, but we don't know what our top end is as far as where we rank with other teams.”

Goodhue's defense was again excellent in a narrow win over Bethlehem Academy.

The Wildcats took an early 7-0 lead, but allowed a touchdown nearly 2 minutes later. Kyle Schoenfelder extended the Wildcat lead to 14-6 with a 10-yard reception with 2:05 remaining in the first quarter.

Neither team scored again until Bethlehem scored with 1 second remaining in the third quarter. Bethlehem's two-point attempts on both touchdowns were missed, resulting in a Wildcats win.

Logan Ferguson led the Wildcats with 101 rushing yards on 24 carries. Schoenfelder, who scored both Wildcat touchdowns, made four catches for 68 yards.

Chatfield scored 14 points in the first quarter and never looked back. Lake City was unable to score until the fourth quarter when Justin Wohlers found Reid Gastner for a 40-yard touchdown.

Wide receiver Isaac Stoesz had a record-breaking night while leading Randolph to victory.

Stoesz had 309 yards on nine catches with four touchdowns. Stoesz broke the school record for career receiving touchdowns with 25. The old record of 23 was held by recent grad Joey Erickson. His 309 yards were most in a game in school history and ranked second all-time in state history.

Nick Drinken threw for 378 yards and ran for 33 more. He tossed all four of his touchdowns to Stoesz and ran for two more.

Randolph (5-1) next host Goodhue (4-2) Oct. 11. The Wildcats have allowed an average of 11 points through the first five weeks.

St. Charles jumped out to 20-6 lead after 12 minutes of play and continued to add on in each quarter. By halftime, the Cougars trailed 27-6.

"Our boys battled and played a solid second half," said Z-M head coach Darin Raasch. " Too many errors in the first half doomed us."

The Saints out-gained the Cougars 477-210. Cougar quarterback Willie Holm threw for 173 yards and two touchdowns, completing 13-of-24. Beau Jurrens ran for 70 yards on 21 carries. Zach Hutton and Tanner Gates each caught a touchdown. Gates had 85 yards on six catches, while Hutton had 67 yards on five catches.

No statistics were available.

O"Reilly tossed touchdowns of 55, 44 and 13 yards. He ended the day 15-of-21 with 285 yards through the air. He also ran for 59 yards, all of which came on one play that resulted in the Panthers' first score of the night.

With all four touchdowns coming via an O'Rielly pass or run and the Cobras unable to score, the Panthers cruised through the final 18 minutes of the game allowing a single touchdown on a 6-yard run in the fourth quarter.

Panther running back Jarod White ran for 58 yards on nine carries. Will Warneke caught all three of O'Rielly's touchdown passes and led all receivers with 112 yards. Tucker Fogarty added 67 yards on two catches.

His 309 yards receiving is 2nd all time in state history for receiving yards in a game, trailing only Connor Foley of New Ulm, who had 320 yards in 2017, according to the MSHSL website.