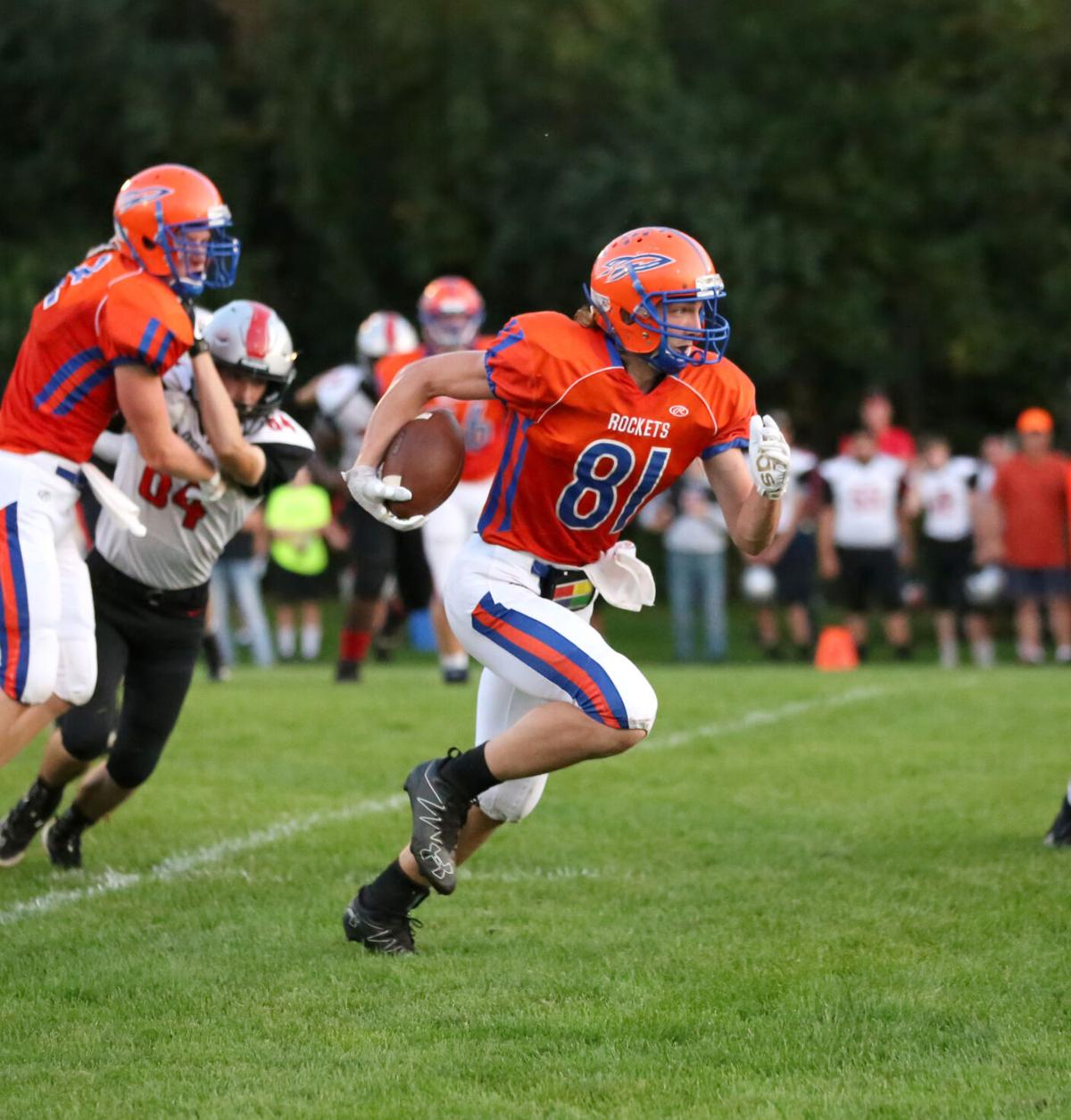 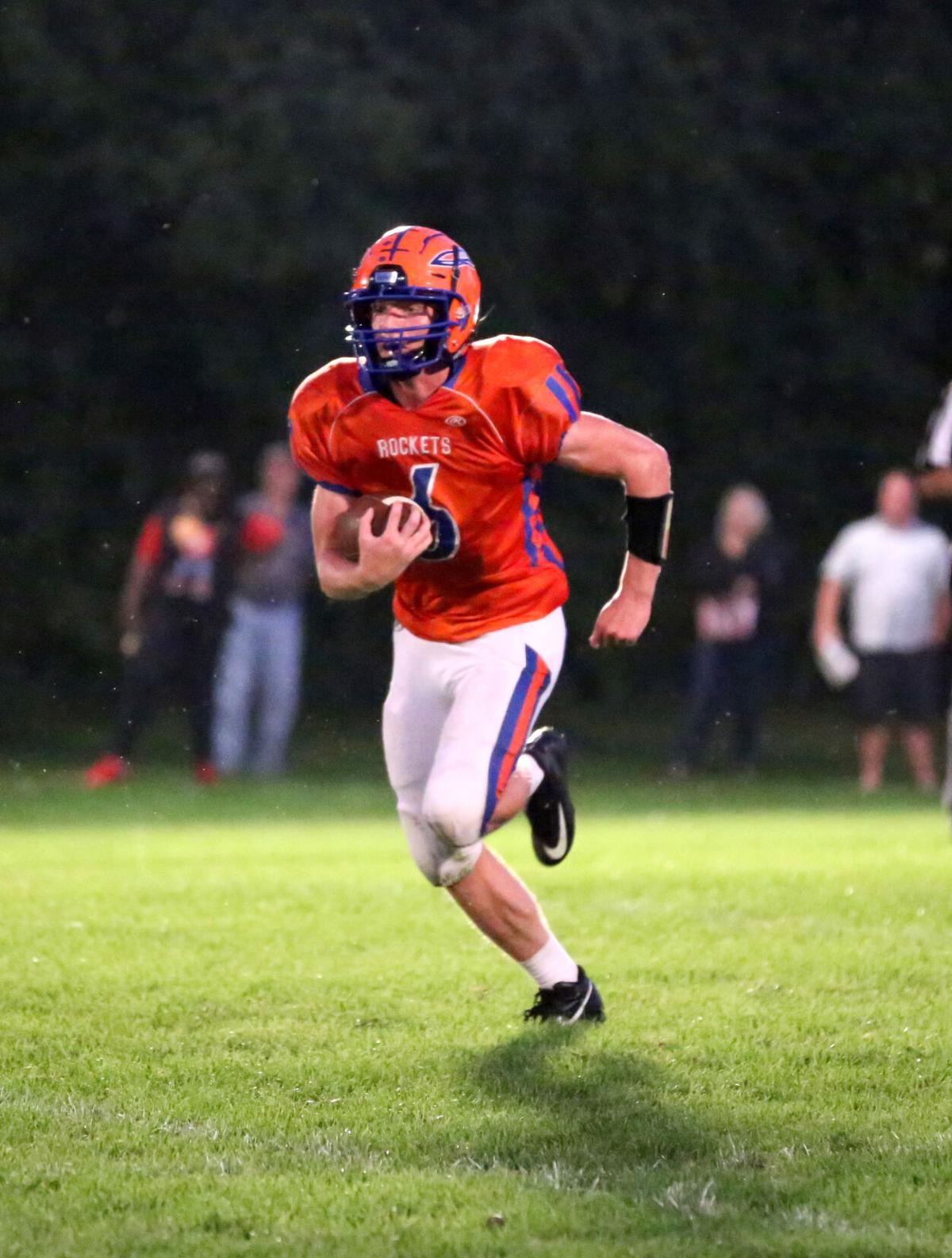 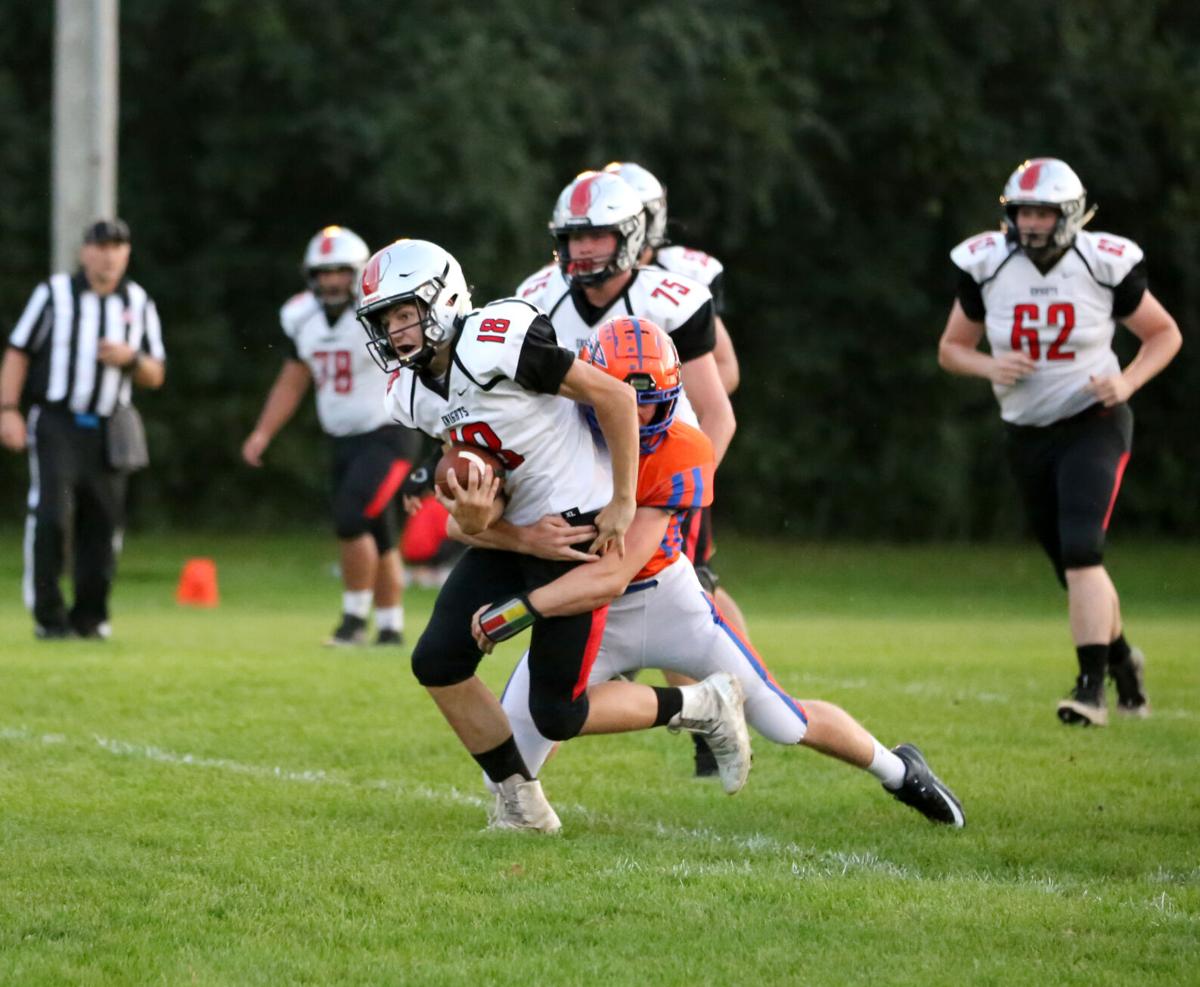 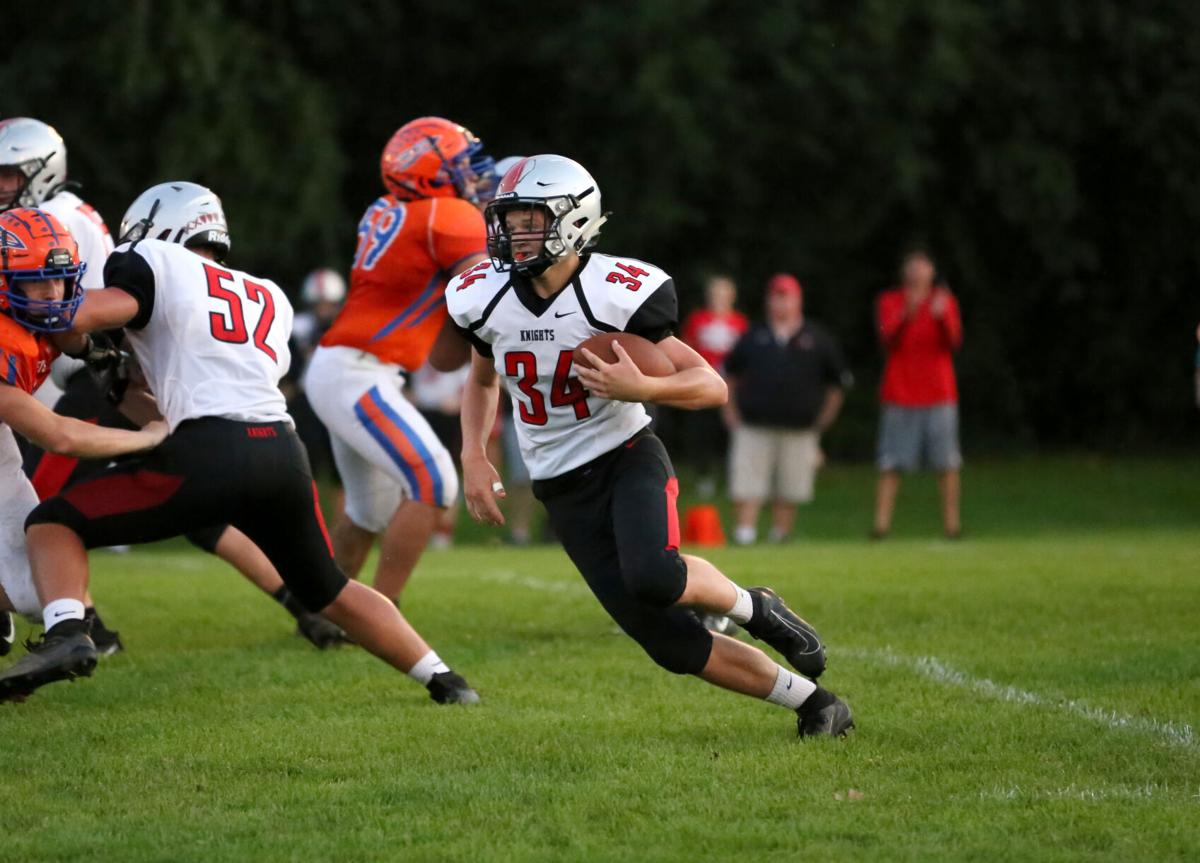 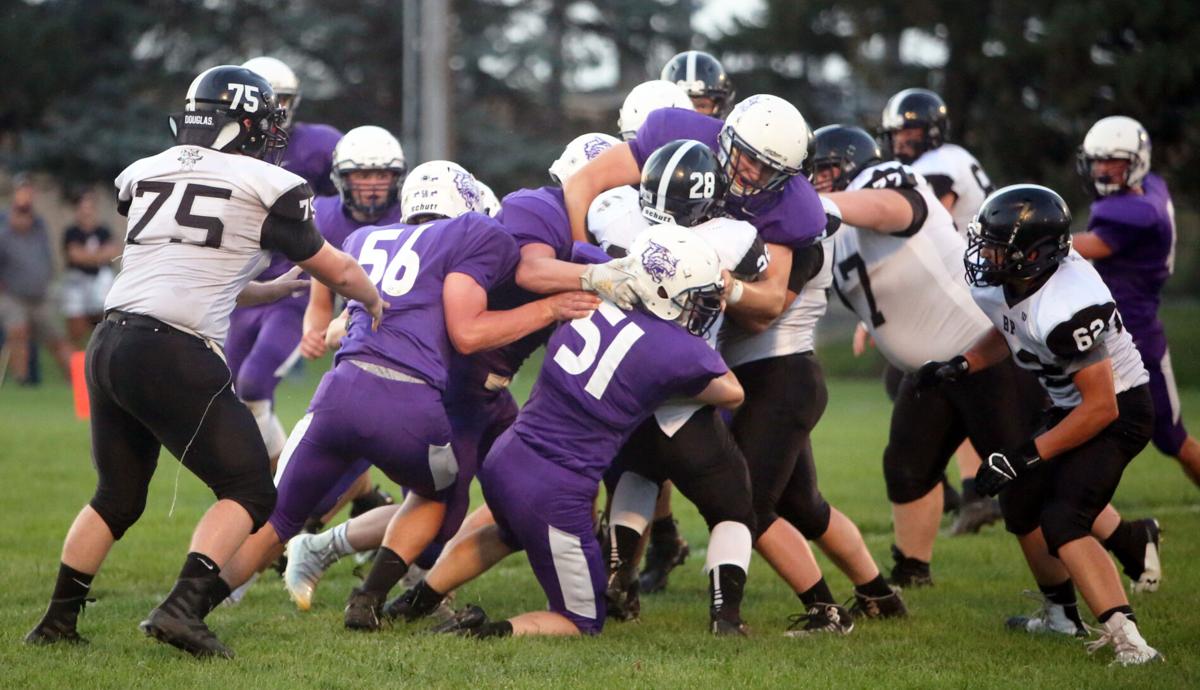 Under the lights in their homecoming game, the Randolph Rockets came out on top after a physical and tiring game against Kenyon-Wanamingo.

Seemingly gassed late in the third quarter on, the Rockets never trailed but couldn’t quite put the Knights away.

On fourth down, the crowd and Rockets sideline had gone mostly quiet. The Klahr Field PA said if you haven’t made any noise this game, now would be a great time to do so.

With the clock closing in on the final two minutes of the game, Berg heaved a desperation throw deep down the sideline for Tyler Craig.

Craig dove for the ball, had it in his arms, but had the ball bounce free upon hitting the ground simultaneously. If the catch had been made, the Knights very well could have scored, needing an onside kick and another touchdown to win.

“They are a good team and people can't sleep on them,” Randolph head coach Mike Schmidt said about the Knights. “I think they are going to win some games this year and have a good season.”

The Rockets, having a good season of their own, won their fourth straight game to open the season with a 32-21 win over the Knights, the first time the team has done so since 2014 when the Rockets began 5-0.

Everything looked business as usual for the pass-heavy Rocket offense to begin the game. Isaac Stoesz took a screen pass from Nick Drinken 58 yards for a touchdown on the first offensive play of the game for the Rockets. Then on the team’s second drive, Drinken hit a wide-open AJ Weidner in the corner of the end zone. The Rockets’ second drive was set up by a Weidner interception.

A 14-0 lead early in the game had the Knights on their heels a bit.

“We didn't necessarily expect it to go for a touchdown,” Schmidt said of the screen to Stoesz. “Any play you draw up, the expectation is if everyone does their job you can score on any play. We weren't surprised getting it in Isaac's hands that he could make a play like that. Definitely a great way to start the game.

“AJ stepped up for us with a couple of big plays,” Schmidt added on Weidner’s play. “He had a nice interception. He played like a senior who was playing his last homecoming game.”

The Knights responded with a long, nearly 10-minute drive that took the remainder of the first quarter and into the second.

Inside the 10-yard line, the Rocket defense stepped up, allowing no positive yardage and picking off Knights quarterback Luke Berg in the end zone.

The Knights finally got on the board with 5 minutes, 16 seconds remaining in the first half. Bray Olson caught a screen pass and ran 45 yards for the score.

In the final minutes of the second quarter, the two teams exchanged turnovers that somehow led to no points.

Drinken completed a pass to Stoesz over the middle of the field. Stoesz was then greeted by a pair of defenders and the big Rocket receiver fumbled the ball right into Tate Erlandson’s hands.

The Knights’ ensuing drive led to nothing and the Rockets looked to redeem themselves. On the 15-yard line, the Rockets coughed up the ball, again recovered by the Knights. However, two plays later, Ehleringer picked off Berg with 14 seconds remaining in the first half.

The Knights defense held Randolph’s normally high-flying offense to 154 total yards in the first half, but the Rockets executed better in the second half and managed to hold off the Knights.

The two early touchdowns by the Rockets proved to be the difference as the Knights got within a touchdown from either tying or taking the lead three times.

“There's a lot we have to clean up,” Schmidt said. “I don't think we executed great at times, but we were able to do enough to get the job done at the end of the day.”

Drinken finished 17-of-25 for 285 yards with four touchdowns and two interceptions. He also had 75 yards on nine carries. Swanson tallied 51 yards on 13 carries. Stoesz led Rocket receivers with 118 yards on four catches. Ehleringer made receptions for 43 yards and Weidner had six catches for 89 yards.

Randolph (4-0) next battles Class A No. 3-ranked-Blooming Prairie (4-0) on the road. The Friday, Sept. 27 matchup with a be yet another tough test for the Rockets.

“Obviously it's going to be a tough test,” Schmidt said. “We'll watch film a little bit tonight and tomorrow and put a game plan together. ... You can't worry about them being No. 3 in the state. We just have to do what we can.”

The No. 3-ranked Awesome Blossoms were too much for the Wildcats Friday night.

The Wildcats scored the first points of the game with a 6-yard catch by Ryley Christianson from Sam Opsahl. The Awesome Blossoms then scored 27 unanswered points to earn the victory.

Opsahl threw for 171 yards, completing 8-of-16 while throwing a touchdown and interception. Baxter O'Reilly led the Wildcat rushers with 72 yards on seven carries. Logan Ferguson ran the ball 11 times for 37 yards. Connor O'Reilly made three catches for 102 yards.

Trailing at the half 10-6 and 17-6 headed into the fourth quarter, Zumbrota-Mazeppa scored 16 points in the final stanza to walk away with a win over Pine Island.

With 3 minutes, 47 seconds left in the game, Cougar Willie Holm completed a 19-yard pass to Zach Hutton for a touchdown. Calvin Voxland ran in for the two-point conversion.

Trailing 17-14 with under a minute to go, Voxland fought his way into the end zone on a 1-yard run.

Holm found Hutton in the end zone for the two-point conversion, which gave the Cougars its first lead of the game.

"Big come from behind victory for us tonight," Darin Raasch said. "I am really proud of the moxie and effort that our boys showed tonight."

Holm completed 9-of-22 for 101 yards and touchdown. Voxland ran the ball 19 times for 77 yards and two touchdowns. Beau Jerrens added 41 yards on six carries. Hutton led all Cougar receivers with six catches for 80 yards and a touchdown.

Calvin Voxland with the score, @ZMCougarsFB with the come from behind win, 22-17 over Pine Island. #zmcougars pic.twitter.com/kAEWoVu7nT