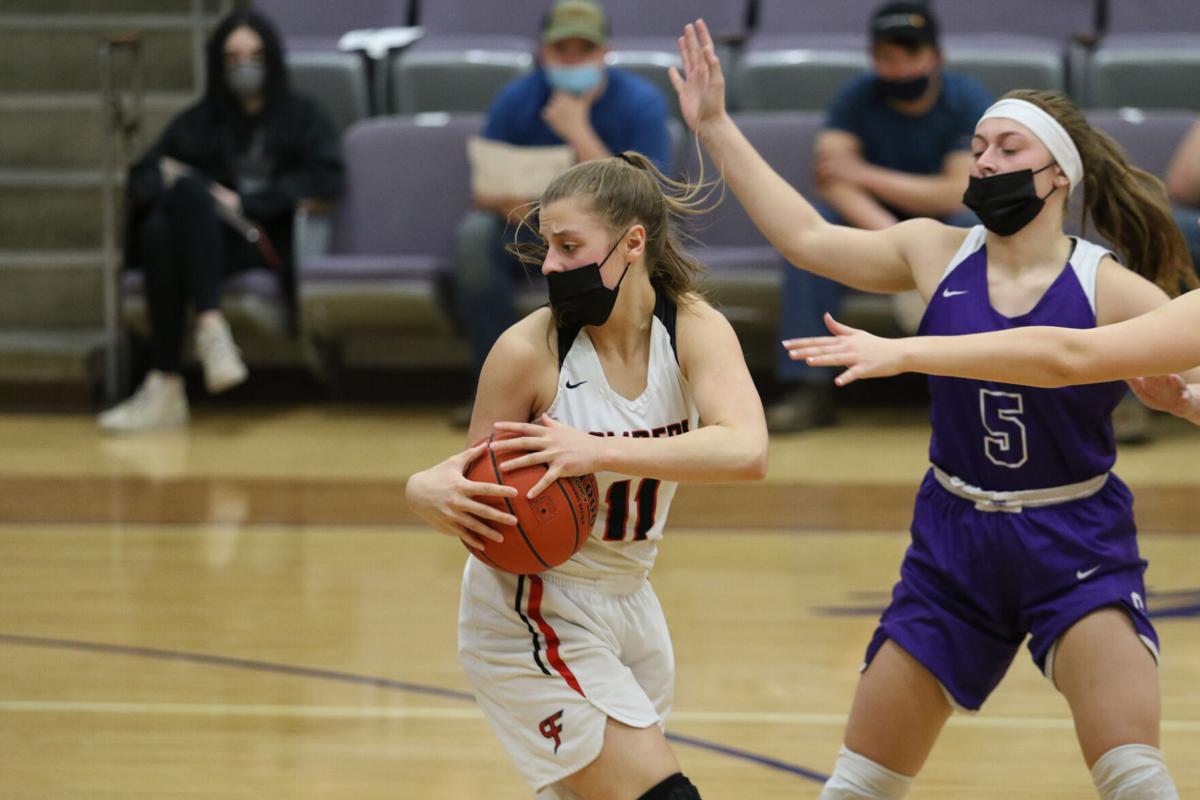 Jaci Winchell (11) tightens up control of the ball against a pair of Goodhue defenders during a Section 1AA playoff game against Cannon Falls on March 18, 2021 in Goodhue. 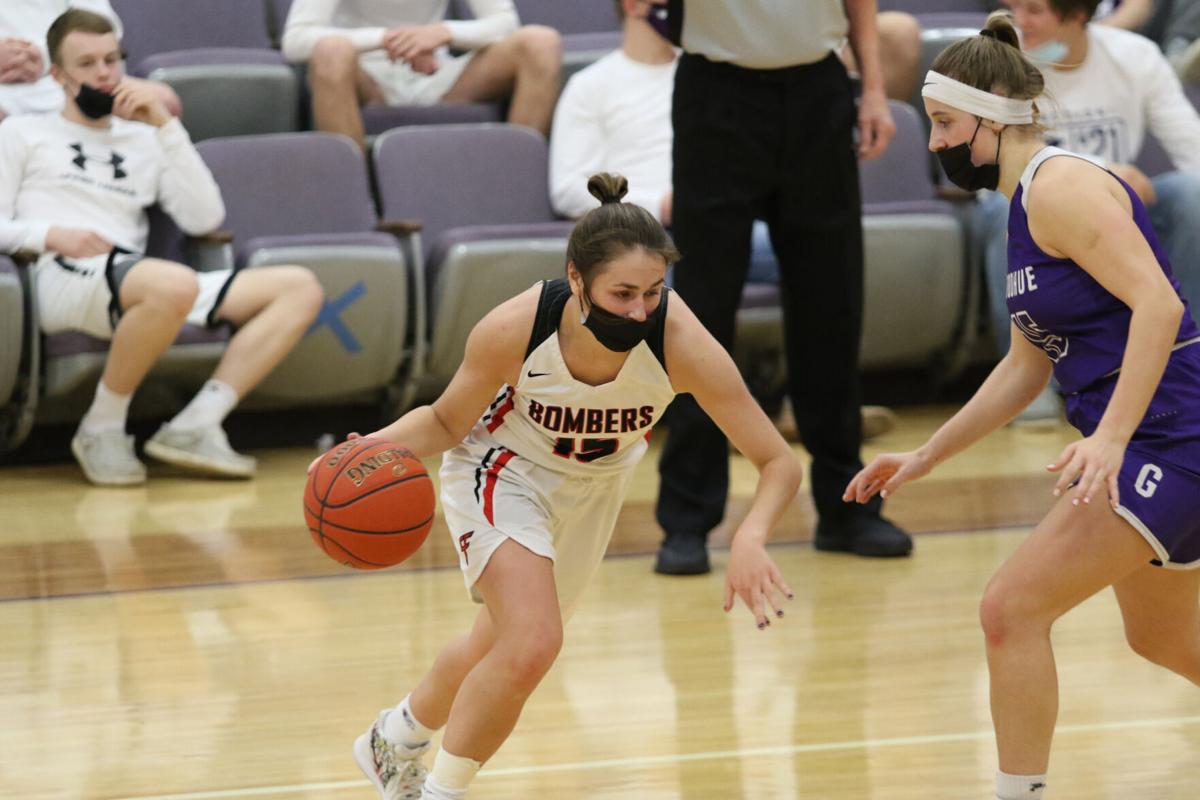 Belle Freeberg (15) of Cannon Falls dribbles around the perimeter during a Section 1AA playoff game against Goodhue on March 18, 2021 in Goodhue. 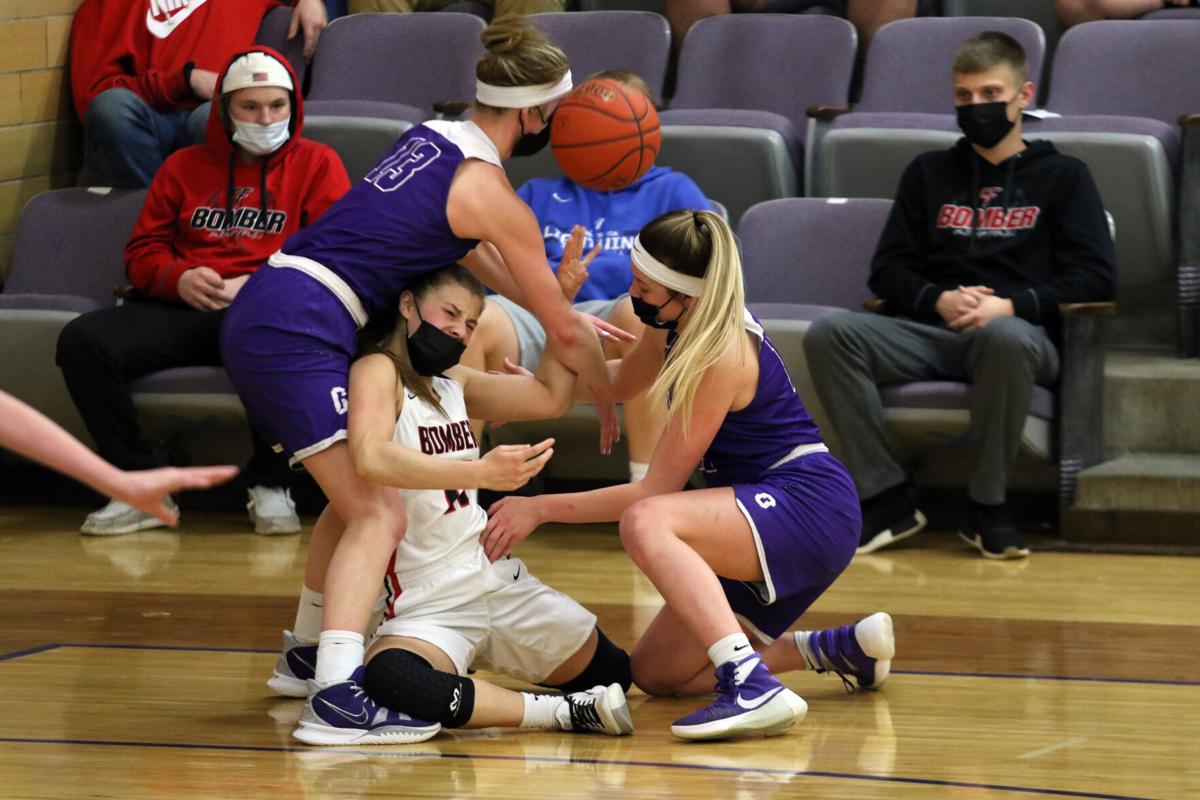 GOODHUE — During the regular season, Goodhue went 0-4 against the three teams seeded ahead of them in the Section 1AA playoffs.

Against everyone else? Well, no team finished closer than 14 points to the Wildcats. That group included Cannon Falls, the Wildcats opening round draw on Thursday.

The first time the two teams met was in the season opener for both squads. Although two months separated the two games, the result was nearly identical as Goodhue won the rematch 80-40. For Goodhue, that meant a trip to the Section 1AA quarterfinals. For Cannon Falls that meant the end of their season.

To the Bombers’ credit, the first 13 minutes of the game went well. Despite falling into an 18-5 deficit in the opening six minutes, Cannon Falls clawed their way back to within six points with under five minutes to play in the first half. Part of the recovery could be credited to both teams being overly excited to start the game, leading to numerous airmailed passes and turnovers. But the other part of the credit has to go to the Bombers settling in and getting quality shots off, compared to earlier in the game when everything was rushed.

Unfortunately for Cannon Falls, their 10-0 run that put the game back within reach was nothing more than a drop in the pan as they managed just 19 points the rest of the way.

“I don’t care how experienced you are, you’re going to have some nerves and extra excitement — everyone is amped up for the playoffs,” Goodhue head girls’ basketball coach Josh Wieme said. “But I think the biggest thing is that it just wore off and the kids probably said it to each other more than I did to just take care of the ball, slow down a little bit. We play fast, we force the issue defensively and sometimes have a hard time composing on offense … we had some of that today.”

Once Goodhue got settled into the game and limited their turnovers on offense, there was little the Bombers could do to keep pace. The Wildcats went on a 20-7 run to end the half and were up 47-28 at halftime.

The second half was much of the same as Goodhue opened the frame on a 19-7 run and were suddenly up by 30 points. From that point on, the Wildcats were able to control the tempo as they saw fit as the final minutes of the game were under a running clock.

“We knew they were going to be ready for us so we just had to make sure we played our game and stayed pumped and excited for ourselves rather than worrying about them,” Goodhue senior Elissa Lodermeier said. “For us, our defense feeds into our offense so that kind of keeps us fueled for that and helps us go in longer stretches with the amount of subs we have.”

To Lodermeier’s point, the bench played a huge role in Goodhue’s win as 10 different people scored points compared to just six for Cannon Falls. Not only that but the bench scored 30 points for Goodhue, headlined by Anika Schafer’s game-high 15 — nine of which came on 3-pointers.

The Wildcats not only benefit from a deep bench, but a solid core of seniors from which half of the team’s points came from.

“I think that’s kind of how our last month has been, is our kids starting to really show who they are and how they can play,” Wieme said. “It’s senior-led, which means they really have a sense of urgency to this season.”

With the win, Goodhue, 15-4, advances to the Section 1AA quarterfinals to face No. 5 seed Plainview-Elgin-Millville on Saturday. The Wildcats will host with a scheduled tip-off of 7 p.m. Goodhue defeated P-E-M earlier this season 58-40.

For Cannon Falls, the loss ends their season with a 5-13 record and marks the fifth straight season of losing in the first round of the section playoffs.

Goodhue made seven 3-pointers on the night, compared to five for Cannon Falls. The Bombers performed better at the free-throw line though, shooting 75% while the Wildcats hit on just 57%.