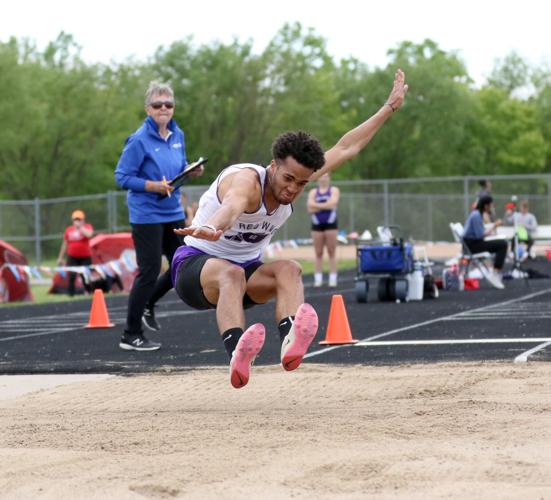 Red Wing's Noah Morgan placed ninth in the long jump with a distance of 19-11 at the Section 1AA meet on June 4. Martin Schlegel / O'Rourke Media Group 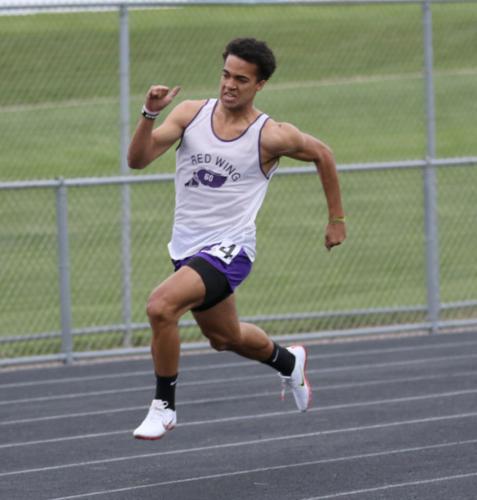 Noah Morgan of Red Wing runs in the 200-meter race at the Big 9 Conference Championships on May 26. Martin Schlegel / O'Rourke Media Group

Red Wing's Noah Morgan placed ninth in the long jump with a distance of 19-11 at the Section 1AA meet on June 4. Martin Schlegel / O'Rourke Media Group

Noah Morgan of Red Wing runs in the 200-meter race at the Big 9 Conference Championships on May 26. Martin Schlegel / O'Rourke Media Group

Getting set up to conduct the first of two heats in the 4x100-meter relay, the track crew had a slight delay in the first heat before firing the starting gun. A member of a team that wasn’t competing yet was lined up with the fourth set of runners.

“We were supposed to be Heat 2 for the 4x100, but I was lined up with Heat 1 on the track ready to go just because I wanted to feel the track just a little bit longer,” he said.

Morgan has been through a lot this season, and he found a moment to absorb one last prerace feeling.

“Then I got kicked off,” Morgan said with a chuckle.

This season has been anything but normal for Morgan. In an early-season meet in April, he was warming up for the long jump. During his warmup, he heard and felt something in his leg.

A pop in his hamstring.

He attempted to stretch it out immediately off to the side, but that seemed to only make it worse.

“My leg got super, super big. Like balloon big because of all of the swelling,” he said.

It was a severely torn hamstring.

Morgan missed the next five weeks of the season. Disappointing for sure as the senior had intentions of breaking the school record in the long jump.

To accomplish the feat, he started lifting during the winter.

“I did a lot of lifting (after soccer),” Morgan said. “It was the first time I actually committed myself to lifting during the four months of winter. The reason why I started lifting was so I could break the long jump record. I was super excited about it.”

It seemed to help. Morgan felt stronger and better prepared for the track season. Upon reflection, he felt he made one error that led to his injury.

“I think one thing I made the biggest mistake of is not stretching after I was lifting,” Morgan said.

He made his triumphant return to the long jump for the first time since his injury at the Section 1AA meet on June 4. Morgan didn’t think he’d place high, having only had a week of practice leading up the meet. He also was set to run the 200 preliminary race on June 2, then anchor the 4x100 and 4x200 relays on June 4.

Morgan admitted he had to get over the fear of reinjuring himself. He wanted so badly to get another chance at the long jump, but in doing so had to overcome his fears.

“It was scary, that's for sure,” Morgan said. “It was the first time doing long jump since getting injured. A lot of nerves going into it. It actually wasn't too bad. I definitely downplayed myself a lot.”

He made the finals and placed ninth in the long jump with a distance of 19-11. He ran 12th in the 200 prelims with a time of 24.78 seconds and anchored two relays, each to seventh place.

For reference, Morgan said he was jumping around 21-06 at best last year.

His first competition of any kind came in the 200 at the Big 9 Championships on May 26.

Head coach Tony Casci watched nervously as Morgan ran the first 100 meters of the race. Morgan said afterward he felt fine with how it went. He wasn’t too hung up on the results, knowing he didn’t have the necessary endurance to keep up. He also ran in the 4x200 relay. That’s when the whole team took notice of what he had done.

Many of his teammates show Morgan a massive amount of respect. He showed up for them and supported them while he couldn’t compete. Even when he is competing, Morgan goes out of his way to pump up a teammate before their own race.

Morgan has way with his words. Even when he leads by example with a display of sportsmanship and honor, his words carry a lot of weight. At the end of the season soccer banquet, he made it a point to recruit those on the soccer team to come out for track and field. He recruited others who dropped out of other sports, because Morgan knew they would do well in track and might want to give it a chance.

“I also told them there's nothing better than getting a PR,” he said. “When you are competing on a hot day and your PR comes on a cold and windy day, maybe one that isn't great for track. (When you) come to a hot day in June or May, that PR is going to feel really good.”

So many of the Wingers did indeed record a PR at the Section 1AA meet, which wasn’t an incredibly hot day but felt like it because of how windy and chilly this spring season has been.

Now that his high school career is over, Morgan realized he’s not done helping people. He plans to go to fire med school to become a firefighter. It’s a two-year program that assistant soccer coach Bill Redman encouraged Morgan to do.

Going out not the way he envisioned could sting a little. Morgan continues to operate with a “glass half full” mentality. He didn’t quite get to accomplish what he wanted but having one last chance to jump with some strong competition and finish in the top-10 is as good of an ending as he could have hoped for.

“It feels good,” Morgan said. “Everyone loves a good redemption story. I didn't think I'd be coming back at all.”