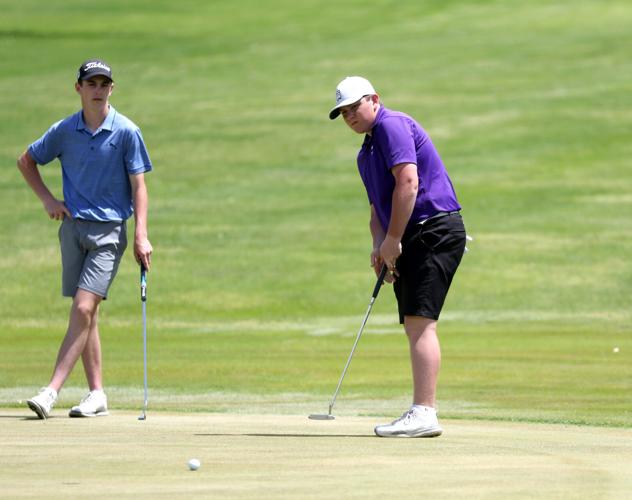 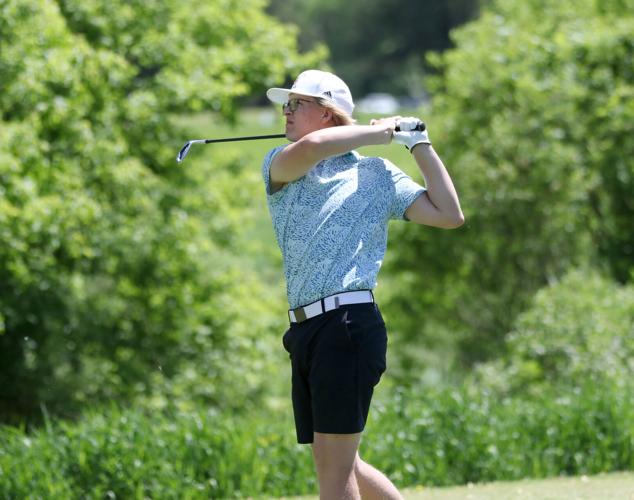 Lake City's Andru Kohrs follows through on a shot on the 13th hole at Northern Hills Golf Course in his second round at the Section 1AA meet on Wednesday, June 1. Martin Schlegel / O'Rourke Media Group

Lake City's Andru Kohrs follows through on a shot on the 13th hole at Northern Hills Golf Course in his second round at the Section 1AA meet on Wednesday, June 1. Martin Schlegel / O'Rourke Media Group

The Red Wing boys golf team finished in fourth place at the Section 1AA meet with a score of 684 at Northern Hills Golf Course in Rochester.

Out of contention for the section title, John Ahrens and Denval Atkinson each were vying for the final individual state qualifying spot during their second round.

Making it more difficult for each to secure the fifth spot was the number of other golfers in contention. After 27 holes, seven players were within four strokes of each other.

Ahrens began his second round a bit nervous. He turned it around and made a push in the final 11 holes, shooting 1-over par in that span. He shot a 38 on the back nine to close out a final round score of 81, giving him 164 for the meet. Despite the push Ahrens made, he came up three strokes short of tying for the fifth state qualifying position.

Atkinson played a relatively consistent first round, shooting an 81 while making a birdie on the 17th. Similar to Ahrens, Atkinson began making shots to keep him in contention on the back nine in the second round. He finished with a 164. The two Wingers tied for 12th overall.

Jacob Quade and Atlin Nelson each played both rounds. Quade finished with a two-round score of 175. He shot a 90 on the first day and 85 the second. Nelson remained consistent throughout the two-day tournament. He shot a 90 in the first round, then followed up with a 91 for a total of 181.

Ben Yoemans and Carter Knapp played in the first round, shooting a 95 and 99 respectively.

Along with Ahrens and Atkinson, Lake City’s Noah Wallerich and Andru Kohrs each had a chance to earn a trip to state.

Wallerich had two birdies and played terrific on the back nine to end his second round with an 18-hole score of 78. Despite the second-round push, Wallerich ended with a two-round score of 163. He made a birdie on the ninth and 17th holes while shooting a 38 on the back nine.

Kohrs navigated around a cluster of trees, standing nearly out of bounds on the 13th to record a bogey. His shot to limit the damage plus a string of pars on the next four holes kept him close to Alex Olson of Lourdes, who held the fifth state qualifying position. Olson had finished his round and was waiting near the 18th green.

Kohrs hit a shot that created a buzz around the clubhouse when his third shot stuck on the green, nearly going in. All that was left was a tap-in birdie for Kohrs, putting him in a tie with Olson at 161 for the tournament. The two played two playoff holes, and Olson won on the second hole to secure a trip to state.

Not far behind was teammate Braxton Berlin. After shooting a 46 on the front nine in his first round, Berlin made two birdies on the back nine to wrap up his round with an 84. He kept up the solid play with a 38 on the front nine in the second round and was holding an individual state qualifying spot at the turn. Two double bogeys in the back nine proved costly as others moved up the leaderboard. Berlin finished with a 166.

Alex Ratz, Ethan Wurst and Portland Grobe each played in just the first round. Ratz had a 98, Wurst had a 99 and Grobe ended with a 104.