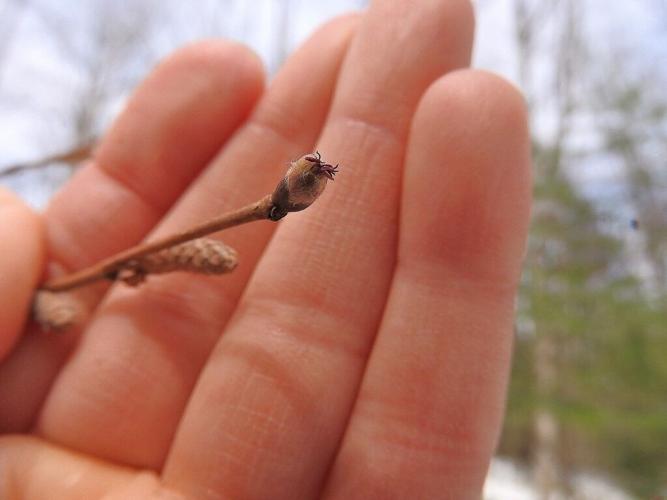 Warm weather followed by a hard freeze in April 2016 meant that this beaked hazel had already flowered, and the flower was damaged by the late frost. 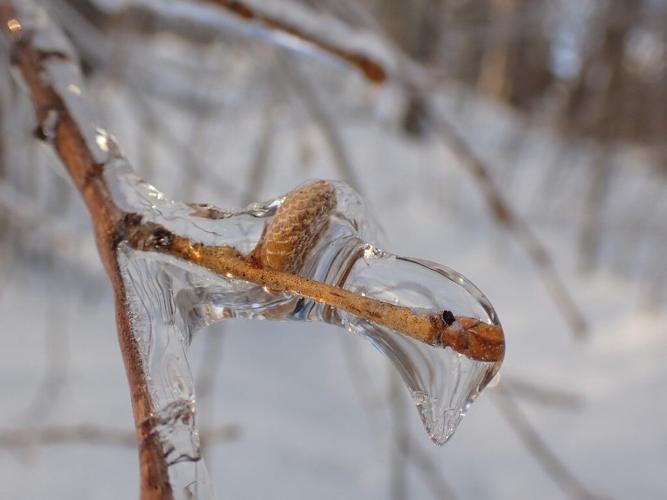 During this recent ice storm, the buds and twigs of this beaked hazel were encased in ice. Because the buds were still dormant, they will likely be fine.

Warm weather followed by a hard freeze in April 2016 meant that this beaked hazel had already flowered, and the flower was damaged by the late frost.

During this recent ice storm, the buds and twigs of this beaked hazel were encased in ice. Because the buds were still dormant, they will likely be fine.

In a little over a week, the Northwoods have gone from being sheathed in ice to swaddled in sunshine. Many of the birch trees that arched over narrow roads and bent their tips clear to the ground on the opposite side have already straightened.

A few remain bowed — their twigs pinned a bit longer by quickly melting snow. The blond wood of fresh wounds glows in the dark forest — those branches will never recover.

The damage from this recent ice storm was not as bad as it could have been. One of the saving graces was that the weather event came on the tail end of a cold winter, and no warmth had begun to tickle the trees into loosening their buds.

As buds break, leaves expand, and trees cast off their winter hardiness in preparation for spring, it takes less and less cold to damage them.

The rest of March is forecast to be warmer than average. If another ice storm catches our trees off guard, the result may be blackened baby leaves and shriveled flowers.

That’s why many of our trees, flowers, birds, and other critters use day length in combination with temperature to gauge whether they are basking in the warmth of actual spring or fool's spring (or one of the other intermediate stages of spring: second winter, spring of deception, third winter, mud season…)

Our Northwoods neighbors (humans and otherwise) have lived here long enough to know that even after an early thaw, cold can snap back for a destructive spring visit. We know to plan accordingly. The dinosaurs were not so lucky.

I don’t get to talk about dinosaurs often. The museum focuses on plants and animals that are native to the Northwoods. Dinosaurs and sharks are both off the table, much to the chagrin of kids who are well steeped in Discovery Channel lore of both.

Dinosaurs were here, but erosion — including the glaciers — erased the more recent layers of bedrock or prevented it from even being formed. The rocks we have left in the Cable Area are one billion years and older — too old for fossils.

So, when a headline: “The Reign of the Dinosaurs Ended in Spring” from SciTech Daily, popped into my newsfeed one recent morning, I was intrigued. How could the season we’re about to enter have hastened the demise of the dinosaurs?

Well, the same way that ice storms in spring cause damage on new growth in the Northwoods.

If the asteroid that hit Mexico’s Yucatan Peninsula 66 million years ago landed in spring, all the critters in the Northern Hemisphere would have been revving up for their most important season of growth and reproduction.

Many would have been killed immediately. Tsunamis drowned plants and animals or buried them in sediment. Forest fires flashed across the landscape.

For those that survived the initial impact, dust from the crash dimmed the sun, reduced plant growth, and stopped food chains in their tracks … right in the middle of baby raising. Seventy-six percent of species — including all non-avian dinosaurs, pterosaurs, ammonites, and most marine reptiles — went extinct.

But in the Southern Hemisphere, animals were preparing for winter. Plants may have been dormant; animals may have been hidden away in burrows or caves. And they weren’t revving up for reproduction.

It’s possible that the firestorms blew right over hibernating animals. Having not been roasted, animals recovered faster. Like our tree buds still closed tight in winter dormancy, mammals, birds, crocodiles and turtles survived.

The other interesting part of this article is how scientists determined the season when this destruction occurred. The evidence came from fish fossils in North Dakota.

Earthquakes triggered by the asteroid caused tsunamis and seiches in many bodies of water, not just the ocean adjacent to the impact. The paddlefishes and sturgeons were buried by sediment that got sloshed around by those waves. They died immediately.

While they were alive, though, their bones recorded the seasons just like rings on a tree. Fast, low-density growth in the summer alternated with slower, denser growth in winter. Different forms of carbon accumulated in their bones at higher rates in summer vs. winter.

For both markers, the fossil fish’s bones showed rings that were growing faster — but had not yet reached summer’s peak. In other words, the asteroid killed them in the spring.

What lessons can we learn from the dinosaurs’ demise?

There are many, I’m sure. The comfort I’m taking from their story today (even as snow melts at a record pace) is that the quiet dormancy of winter is not all bad.