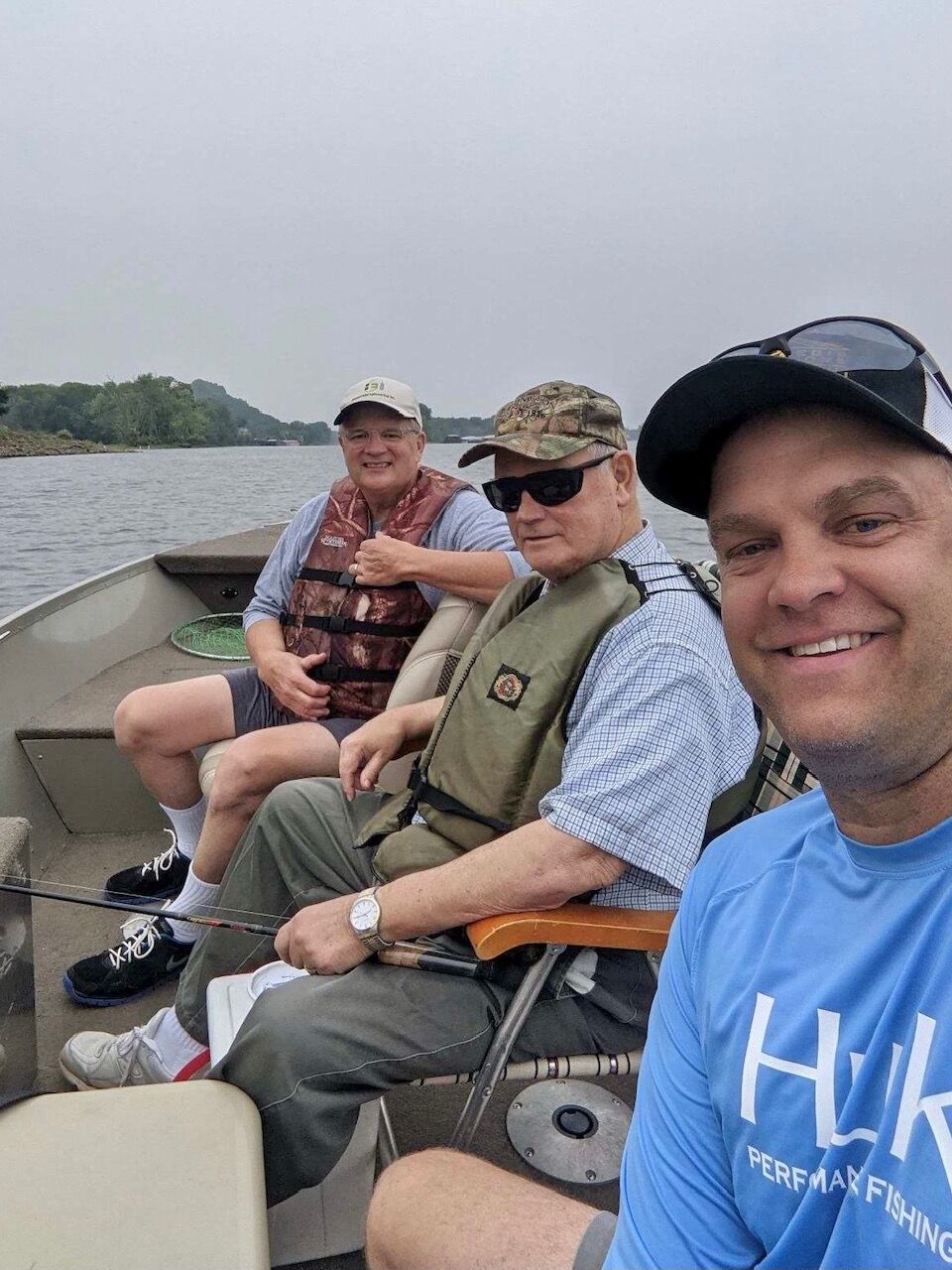 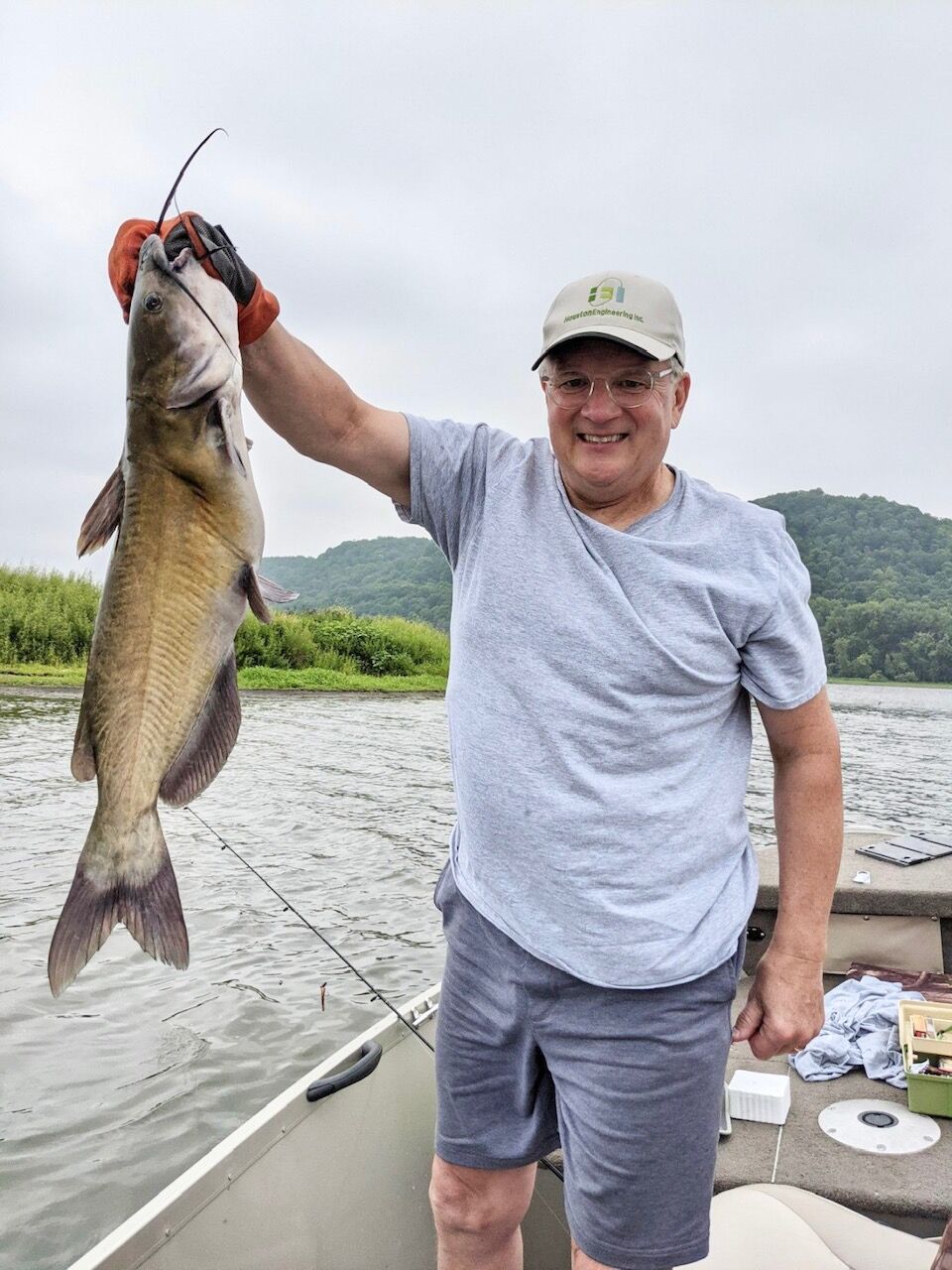 Randy Johnson's whale of a catch.

The heat and humidity had been unbearable, the drought was dropping the river level to record lows, the mayflies were hatching and the smoke from Canadian wildfires made the air unsafe to breathe.

So I went fishing.

First, let me remind you that I am not a sportsman. I rarely fish and I don’t hunt. Yet when you live in this area with so many options for outdoor activity, it’s good to partake in at least one of them, even if only occasionally.

Going fishing was not my idea. My nephew Brian had been talking about taking Bruce (his dad, my brother) walleye fishing on the Mississippi down from Colvill Park. We talked about this for several years. So finally this year we did it.

In preparation I had to locate and dust off my fishing gear. Then I had to get a fishing license and some nightcrawlers. I found my last license and was surprised that it was from 2018, which is not that long ago in my fishing world. But I don’t even remember fishing that year. I probably went once.

I was going to buy a one-day license but decided to get a conservation license which didn’t cost much more and is good for the year. The compromise is that your limits are cut in half. That’s not a problem for me since the few times I go I don’t catch anything worth keeping, certainly nothing approaching any limits. More often I catch nothing.

As we left the Colvill Park boat launch, I wondered how many of the boats in slips there could even get out with the water so low. A lot of boats have run aground this summer.

The fish finder on Brian’s boat showed the water depth near the entrance to that channel at 1.8 feet. I don’t know how we didn’t hit bottom. Brian had the motor trimmed up most of the day.

The whole day was strange. There was an easterly breeze just strong enough to blow us upstream, even in the main channel. We lucked out on the weather, though. It was a bit cooler, probably from the clouds, smoke and breeze. The low water unveiled hidden peninsulas where now-exposed organic material allowed vegetation to sprout. Shorelines were also turning green.

We didn’t catch much in front of Colvill Park so headed downstream to the channel that takes you to the Bay City Flats. We fished all over that area – in the main river, on either side of it, and down that channel.

The best luck we had was right at the entrance to the channel. Bruce had fished in this area too many times to count. I have fished with him there before, as had Brian. Pretty quickly both Bruce and Brian were catching fish. It took awhile for me to hook a small sunfish.

But then my luck improved.

That is, it improved from the standpoint of excitement. We were actually casting close to shore where it was shallow. Bruce said there’s a big boulder below water level where fish like to hang out. My pole slowly bent way over, as if I had snagged a rock or something. As I started to work the line I could tell I had a fish on the line and it might be pretty big. It was hard to focus on it with both Bruce and Brian getting excited, yelling and laughing.

“Hey, you got a monster wally on there! A real hog! Bring it in!” they shouted, almost in unison.

I decided to bring it in slowly since my fish line was likely to break. I at least wanted to see what I’d hooked. For about a minute it went in a circle, including under the boat. Brian readied the net as it got closer. I thought the pole would break.

“I think it’s a whale,” I joked, effectively stamping a name on this event forever.

Suddenly, there it was.

Yes indeed, I had hooked a respectable catfish. We finally managed to get it into the net and bring it aboard. After some work, I got the hook out. Brian measured it out at 26 inches. He didn’t have a scale but Bruce thought it must weigh 10 pounds. It was slimy enough that I had to use a fish glove to hold it up for a photo before releasing it.

Altogether, it was a successful day. Between us we caught a walleye, a carp, a few sheepsheads, a couple mooneyes and a bunch of sunfish. And, of course, the whale.

There’s definitely a large variety of fish out there. I took home the sunfish and the one keeper walleye, mostly butchering them as I pretended to know how to fillet them.

Now we’ll see if the “whale” story changes over time. It may grow in length and become a shark.