George Wallace “Wally” Jacobson, age 93 of Cannon Falls, MN, passed away peacefully Friday, June 10, 2021. Wally was born on February 22, 1928, to Joseph and Anna (Ring) Jacobson on the family farm. He was baptized and confirmed at the Eidsvold Methodist Church and was an active member of the Urland Lutheran Church.

Wally married Kathy (Swenson) on April 4, 1970 and they had four children, Terry (Laurie) Jacobson, Tammy (Todd) Hanson, Trent (Joannie) Jacobson all of Cannon Falls, and Todd Jacobson of Orlando, Florida; his grandchildren, Karissa, Chase, Kira, Yvonne, Morgan, Preston, Auston and Nicki. He is also survived by sister-in-law, Arlis Jacobson of Zumbrota and many nieces and nephews.

Funeral service will be held on Sunday, June 13 at 2:00 pm, with visitation from 1:00-2:00 pm, at Urland Lutheran Church, 6940 Co 9 Blvd, Cannon Falls. Interment will follow at Eidsvold Cemetery.   In lieu of flowers, memorials are preferred to donor’s choice. 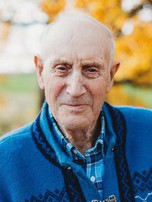