Sonia was born on December 18, 1919, to Charles and Anna (Jensen) Stroman on the family farm in Swanville, Morrison County, Minnesota,

After attending school through the tenth grade, Sonia went to Minneapolis where she was a live-in housekeeper for several families. One month before the US entry into WWII, Sonia returned to help on the family farm and worked at the State Bank of Swanville. In 1942, Sonia moved to Portland, OR, and worked as a welder in the Kaiser Shipyard from 1942 until the end of the war in 1945. Sonia became engaged to Lawrence Peterson, but before their marriage, she returned to Portland where she was a telephone operator. Sonia and Lawrence were married on June 7, 1947, at the Congregational Church in Swanville. During their marriage Sonia did housework for area families for over 30 years. She was also a custodian at the Vasa School until her retirement in 1978.

Sonia was a member of the Vasa Lutheran Church, Vasa Friendly Farmerettes study group, a homemaker’s club, the American Legion, VFW, Red Cross, American Rosie the Riveter Association, and was a 4-H leader for over 30 years with the Happy Hustlers.

Funeral services were held at 3:30 pm on Sunday, Jan 2, at Lundberg Funeral Home, 5839 Hwy 19 Blvd, Cannon Falls, MN 55009. There was a visitation from 1:00 pm until the time of the service. Interment was in the Vasa Lutheran Cemetery on Monday, January 3, at 11:00 am. The service was recorded and may be viewed on Sonia’s obituary page at www.LundbergFuneral.com. 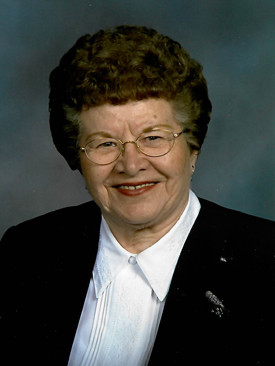