On Wednesday, August 25, 2021 Dolores Jean “Dee” Teschendorf (nee, Anderson), 94, passed peacefully in her home at Deer Crest in Red Wing, Minn.  Dee met her husband Phil on a New Years Eve blind date and they married in 1950. They had 50 happy years together until Phil’s passing in 2001.  Her favorite pastime in later years was playing games and communicating with her family via her iPad, which, at 94, was pretty amazing. She also enjoyed the occasional happy hour, watching HGTV, was an avid “chocoholic” and a big HUGGER.  Dee will be greatly missed by her daughters, Patti (Rick) Landers of Red Wing, Mary (Todd) Bainer of Marana, Arizona, and son Brian (Paula) Teschendorf of Vadnais Heights, Minnesota; grandchildren, Nathan (Michele) Landers, Noah (Katie) Landers, Rachel (Paul) Teschendorf, and Natalie Teschendorf; great-grandchildren, Owen, Michaela, Ruby and William; step grandchildren, Joe, Jake, Jarrett; step great-grandchildren, Erica, Lemoine, Katie, Lilliana, Jed and Jules; and four step great-great-granddaughters; nieces and nephews.  She was preceded in death by her husband, Philip Teschendorf; parents, Edgar and Bertha Anderson; sister, Lois Nelson and nephew, Steve.  Special thanks to the Deer Crest staff and Brighton Hospice for their comfort and care. Memorials are preferred to Deer Crest Activities Fund or to the charity of your choice.  A private interment at Fort Snelling National Cemetery will be held at a later date.      “Hugs to all!” 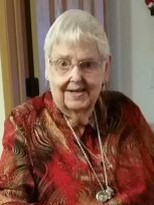