Dolores Ruby Bruemmer, 87, of Red Wing, died on Sunday, July 18, 2021, at her home surrounded by her family. She was born on December 7, 1933, to Rudolph and Rosa (Rochel) Jurgens in Ward, SD. She was brought into faith as a child at Immanuel Lutheran Church in Ward, SD. She attended country school through the 4th grade and moved to Elkton, SD in 1943 and Verdi, MN in 1948. Dolores was confirmed on July 11, 1948, at Trinity Lutheran Church in Elkton, SD. She graduated from Verdi High School in 1952. On June 8, 1952, she married the love of her life, Donald Bruemmer. They farmed until September of 1952, when Don was drafted into the United States Army. In 1953, she joined Don at Fort Knox, Kentucky until he got out of the service in 1954. They farmed until 1960 and then moved to Flandreau, SD. In 1962 they moved to St. Paul, MN and to Red Wing in 1963. She had day care for many years while her children were small. Later she worked at Interstate Clinic, H&R Block, and retired from McDonalds after 13 years in 1996. She was a member of St. John’s Evangelical Lutheran Church and sang in the church choir. She enjoyed traveling, sewing, and textile painting. She loved her children and her grandchildren and was proud to be a great-grandma.

She was preceded in death by her husband, Don; her parents; one son, Larry; one granddaughter, Delora-Ann Patterson; and two brothers, Butch and Elmer.

Memorial service will be at 11 a.m. on Saturday, August 7, 2021 at the Mahn Family Funeral Home, Bodelson-Mahn Chapel. A visitation will be one hour prior to the service. Burial will be at the St. John’s Lutheran Church Cemetery. Memorials are preferred to St. Croix Hospice. Online condolences may be left for the family at www.mahnfamilyfuneralome.com. 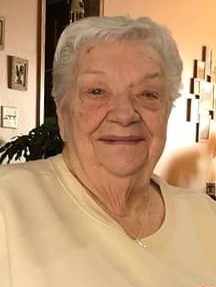