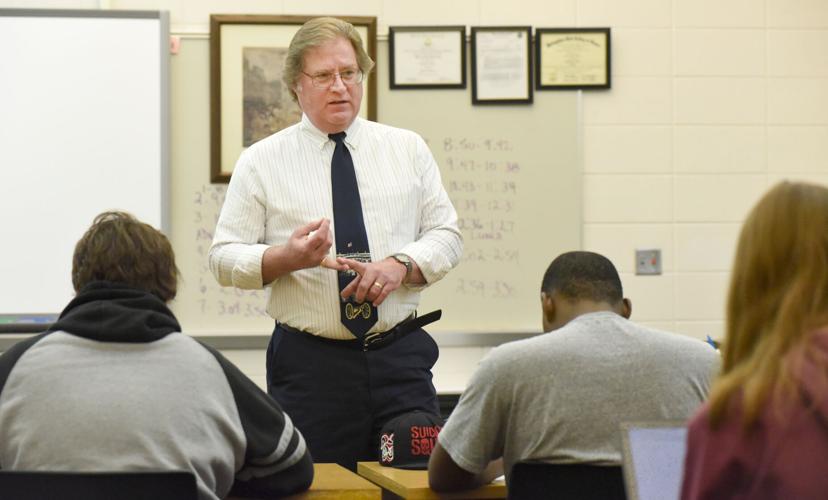 Over the years, Scott Bender has shaped many minds – not just with facts but with lessons of critical thinking, how to cut through the noise and squabbling to determine one's own positions on an issue. 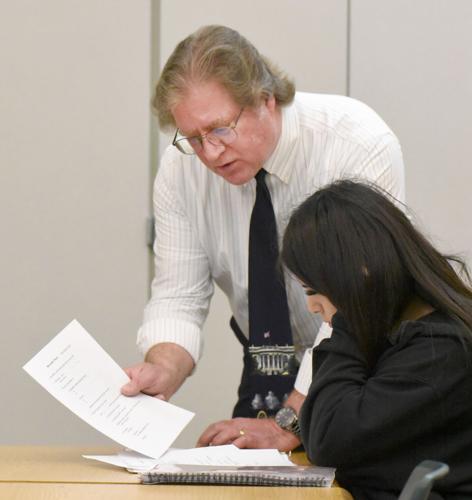 For each pair of statements, place an X in the blank next to the statement with which you MOST agree.

_ The government should make sure everybody’s needs are met. (D)

_ The government should be as large as it needs to be, with as many agencies as necessary to ensure that peoples’ needs are met. (D)

_ The government should spend less on the military so that more money is available for other government services. (D)

_ Government leaders should take care of the problems we have in the United States instead of worrying so much about trading around the world. (R)

_ Private industry cannot create jobs for everyone; the government should create job programs to ensure that everyone has a decent job. (D)

The year was 2017 in the classroom of Red Wing social studies teacher Scott Bender. Each of us in the senior government class took out a piece of notebook paper and a pencil. Flipping through Powerpoint slides, Mr. Bender had us reflect on our own political positions by taking a quiz: “Are you a Democrat or Republican?”

With answers written down, he asked us to gather our things and stand up.

We were not to sit in our self-assigned seats anymore.

How you answered questions on the quiz determined where you sat in relation to Mr. Bender’s physical aisle.

The classroom was set up so that the left side of the room faced the right side, an aisle in the middle separating the two.

With a graduating class of less than 200, we had a vague idea of where each student may land on the political scale, but for the first time, we saw the spread of political beliefs in front of us.

About half the class of around 20 students was found centrally in the seating chart. They were moderate in their political views.

A few students were strongly left-leaning while the rest of the class landed on the strong right.

We were staring down our differences.

As uncomfortable as it was, we were not to revel in conflict. Rather, we were encouraged by Mr. Bender to foster a space of respectful and reciprocal conversation – a hard ask in the wake of the 2016 presidential election.

After spending years providing senior government and eighth-grade global studies students with a unique perspective on the world and the tools to think critically about it, Scott Bender will retire at the end of the school year.

Before becoming a social studies teacher, Mr. Bender served a stint in the U.S. Army. He draws from his experience and knowledge with an intelligence outfit in West Germany before the wall fell.

He supplemented that knowledge with a lifetime of continuous learning.

“Each summer, his vacations centered around visits to historical sites where he could see the lay of the land and learn things that weren’t in the textbooks, things he passed on to his students, things that didn’t necessarily come with the rah-rah gloss of textbooks,” his brother, Tony Bender, wrote in a recent column in the Republican Eagle.

Mr. Bender’s dedication to truly understanding what he taught was evident. We didn’t memorize information from textbooks. We had conversations. We listened. We took notes.

I had decided before I stepped into Mr. Bender’s classroom to become a journalist, but Mr. Bender played no small role in solidifying that career path for me.

I took a class from Mr. Bender once before and knew his expectations of me were up to par with my own expectations – high.

Sitting down with my high school best friend, Jessica Yates, we faced some of our polar opposite peers in Mr. Bender’s classroom.

Everyday, the bell would ring, he would shut the classroom door (for safety reasons we learned about in his eighth-grade global studies class), and he placed a few questions on the board. I’d write each one down, meticulously in my notes. Mr. Bender would no doubt quiz us on these questions later. They weren’t yes or no, or short answer questions. They were broad and exploratory.

“Why” and “how” questions were common.

We began our class periods at the start of the semester with the basics: the three branches of government.

Mr. Bender taught our class about the judiciary, legislative and executive branches and how they work as checks and balances.

No one branch can function in a democratic republic without the other.

But there was a fourth necessary “branch” that preserved our system. It wasn’t a government entity, though.

It was and is the free press.

How the press functions in the United States has changed over centuries. Politics have changed.

I sat down with Mr. Bender before I wrote this article to see how the climate of the classroom had changed over the last few years.

He brought up a moment from that day in our politically divided classroom that had stuck with me, as well.

In 2017, we had been discussing how difficult it had become for Democratic and Republican politicians to reach consensus or have conversations, for that matter.

Sitting next to Yates in government class, she called over to the other side of the classroom: “Hey, do you want to be partners on the next assignment?”

Yates chose to challenge herself over submitting to comfort, teaming with one of our peers who both physically and politically sat on the other side of the aisle.

In Mr. Bender's classroom, we found common ground. He taught the importance of interrogating our own understanding of the truth. One of the easiest ways to do so was to talk to each other.

Divide has proven difficult for Mr. Bender as an educator.

He is a compromiser, but he’s not a caver, he told me.

A principal determined he would no longer be teaching government, the class where he taught me and so many others so much.

The class continues to be offered; it is just no longer taught by Mr. Bender.

Students were afraid to fail, even though they rarely, if ever, did.

My step-brother was recently a freshman in Mr. Bender’s world history class, a curriculum Mr. Bender didn’t teach when I was in school. I told my brother about my conversation with Mr. Bender. Even though he was not Mr. Bender’s biggest fan, he told me something I was not expecting to hear.

“I learned more in that class than in any of my other classes,” he said. And he didn’t walk away with an A.

Mr. Bender has a reputation as a tough grader. You aren’t getting an easy A for regurgitating information. He looks for understanding, inquisitive responses and active class engagement, which is often a hard pill to swallow for many students. Mr. Bender has often been met with contempt for his grading strategies.

Grades don’t equate learning, and my brother is a perfect example of that.

Knowing what losing global studies and government classes meant going forward, Mr. Bender decided it’s time to retire and will do so at the end of this year.

Integrity is core to Mr. Bender, and he leads by example. It’s something he is not willing to concede.

One of the keys to integrity and ethics is fact finding. It’s a skill Mr. Bender didn’t teach as one unique to reporters. He demonstrated it as a skill essential to the function of our democracy.

He taught us where to look for journalists who were executing work with integrity.

One of the most memorable moments in Mr. Bender’s class was when he pulled up a graph called “The Media Bias Chart,” a graph of the political biases and reliability of various news outlets.

He didn’t just show us a graph and expect us to trust what we read in the Associated Press because it was considered “centrist” and “reliable.” He challenged us to fact check for ourselves.

Who else is reporting on this information? How are other people reporting it?

It was never about what Mr. Bender “thought.” It was about what facts he presented us with, whether they supported your opinion or not. Feel free to challenge them, but you better have facts of your own from various sources to back up your contradiction.

Next year, Mr. Bender will be absent from the hallways of Red Wing High School. He always will be an integral part of my education and that of many others.

Over the years, he has shaped many minds – not just with facts but with lessons of critical thinking, how to cut through the noise and squabbling to determine one's own positions on an issue. Mr. Bender taught students the most valuable and often “unteachable” lessons.

He taught how to think and how to be a contributor to the democratic process – no matter which side of the aisle you were seated.