The possibility of allowing chickens in Red Wing has been discussed for years and now the city may finally be approaching a decision.

This week the city of Red Wing put out a survey to community members about possible chicken and bee ordinances. The single-page survey explains, “the Red Wing City Council will be considering whether or not to approve beekeeping and raising chickens in the city limits. … Council members are listening to what you have to say.”

If chickens are allowed within Red Wing there are a variety of rules that owners would need to follow, including:

The city’s zoning inspector would enforce the above rules.

Members of the Planning Commission and City Council have discussed the advantages of allowing chickens in Red Wing. During a February City Council and Advisory Planning Commission joint workshop, Council President Becky Norton talked about the nutrition that home grown eggs could provide for families. She explained that this could be one small step toward a more equitable community.

“I think that access to food is something that we need to recognize when we are trying to address some of the disparities in our communities. This is one of the ways that we can do it, it's a small way, but it is definitely a value in that,” she said.

Chickens are also useful for producing fertilizer, pest control and eating some table scraps to keep them out of the trash.

In the survey community members are asked to include anything that may concern them about chickens moving into the city. These concerns could include noise, smell, neighbor relationships, the health of the people and animals and more.

The possibility of beekeeping in Red Wing will also be considered by the council. This is a more recent proposal and the details are being developed.

What is known is that bees are vital for ecosystems. The city’s website explains, “Each year, wild and domesticated bees pollinate around 30% of crops in the United States. Bees also pollinate 70 to 80% of native flowering plants in the Midwest, allowing plants to produce and survive. More than 4,000 native bee species call North America home, but many of their numbers are declining, along with many types of butterflies and other insects. At the same time, colonies of European honey bees have also suffered significant losses. Habitat loss, pesticide use, and a variety of other factors contribute to the declines of these insects.”

The survey can be completed online or printed from the city’s website and mailed to Red Wing City Hall, 315 Fourth St., Red Wing, MN, 55066 - Attn: Survey. 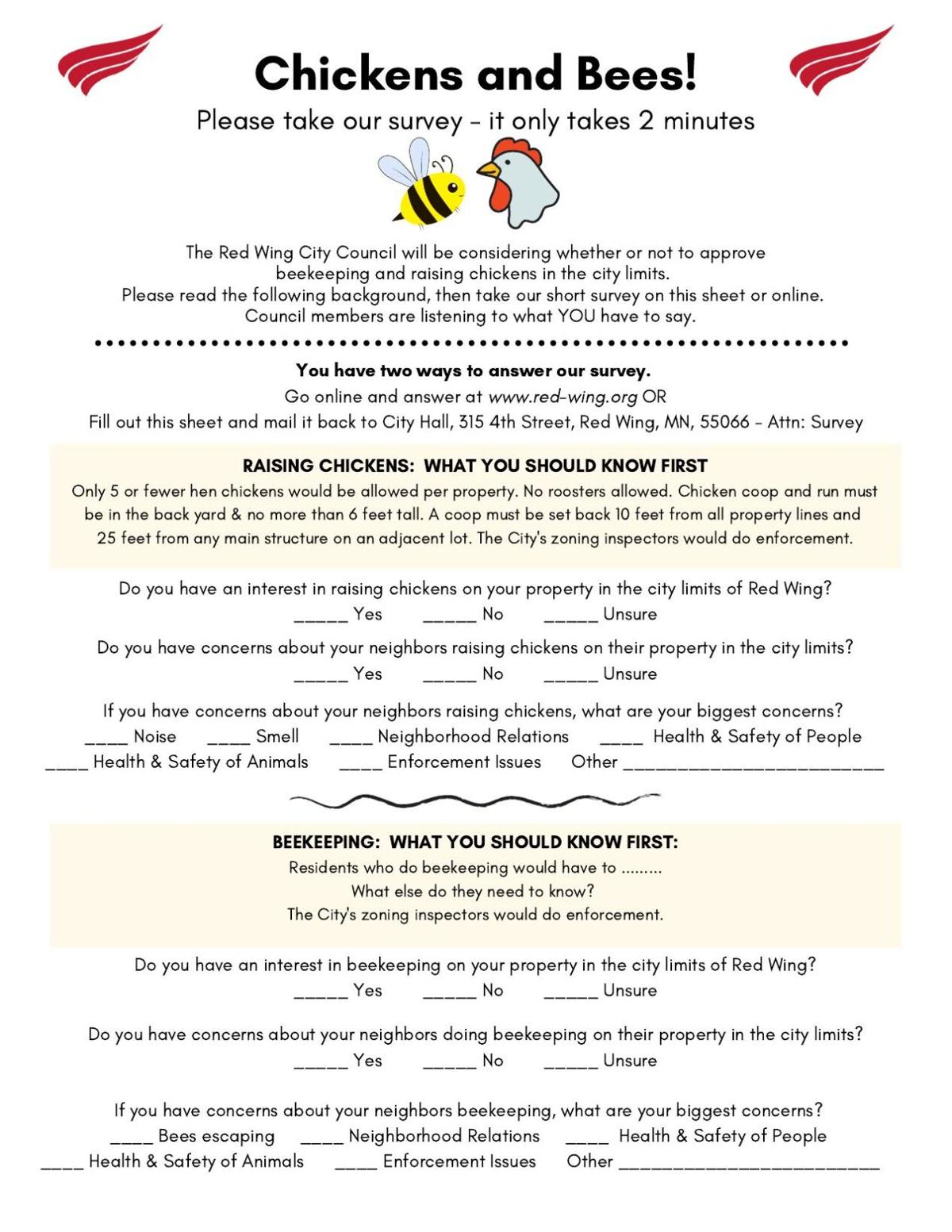