John and Betty Jaeger were named the 2021 Goodhue County SWCD Conservation Farmer of the Year. 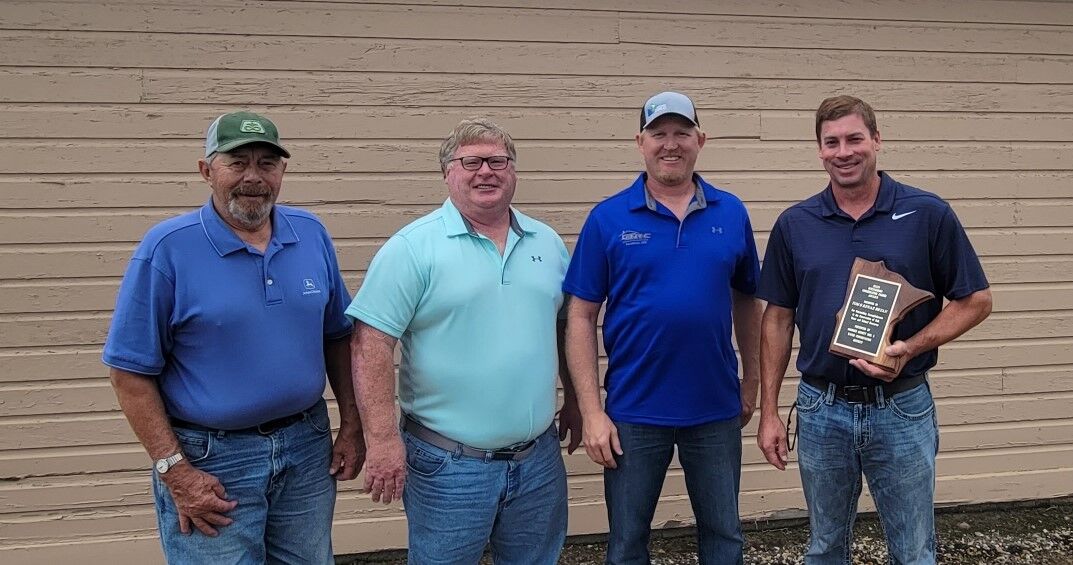 Tom and Renae Bryan were named the 2020 Goodhue County SWCD Conservation Farmer of the Year.

At the 2021 county fair, the Goodhue County Soil and Water Conservation District hosted the annual awards program during the County Board meeting. Both the 2020 and 2021 Conservation Farmers were honored this year because the 2020 fair was canceled due to COVID.

The Conservation Farmer of the Year award is a chance for the Goodhue SWCD to reward and promote good soil and water conservation in the county. For over 60 years the county’s Soil and Water Conservation District has chosen an individual or organization that has shown a strong history of conservation and land stewardship.

The 2020 Conservation Farmer of the Year award was presented to Tom and Renae Bryan from the Red Wing area. The Bryans own and operate a beef cattle and cash cropping farm outside of Red Wing. They have been active in working with the SWCD over the years to install numerous erosion control practices on their cropland and they also manage one of the more pristine pastureland areas in the county along the Cannon River. The Bryans recently utilized marginal cropland acres for solar garden developments. The solar gardens can provide sustainable energy for the future, diversify a farm operation budget and improve pollinator habitat while improving water quality. The ongoing conservation efforts being implemented and the environmental foresight of the Bryan’s practice is why the board selected them as the 2020 Conservation Farmer of the Year.

The 2021 Conservation Farmer of the Year Award is John and Betty Jaeger Farm. John Jaeger has lived and breathed conservation for the past 30 years, not only on his farm in the Wells Creek watershed, but in his role as an elected official on the Goodhue SWCD as well. John’s contributions and years of service to the SWCD elected Board of Supervisors was recognized this past December following his retirement from the SWCD Board. John and Betty Jaeger have farmed in the Wells Creek area of Goodhue County since 1974, when they started renting the farm from Betty’s mother.

The Jaeger’s farm is a mix of cropland, wooded hillsides, riparian areas and well managed pasture land for their beef herd. The operation consists of a corn and soybean rotation with about 60 acres of hay and barley mixed in on any given year. John no-tills all of his soybeans and has started to no-till some of his corn as well. He is planting about 50 acres of winter triticale cover crop each year after corn that he will harvest in the spring for forage before he plants his soybeans. They also raise around 60 head of beef cattle and have their pasture land set up to rotationally graze the herd throughout the growing months. John worked with the SWCD to improve his feedlot and make it more user friendly during the months when the pasture isn’t able to be used. A concrete curb and a filter strip were also installed to catch and filter any runoff that may come from the feedlot.

Farming in the Wells Creek Watershed isn’t only about managing the cropland with reduced tillage and cover crops, there’s also a need for structural practices that help slow the flow of water on the hilly landscape. John recognized this early on in his farming career and installed his first grade stabilization structure in 1978 with the help of the Soil Conservation Service. He has since installed five more structures and multiple diversions and waterways, both on his own and with the assistance of the SWCD. Over 210 acres of runoff is retained and treated on the Jaeger Farm through a dam before it gets into Wells Creek. John even had a stint where he was restoring some of the old stone and concrete Civilian Conservation Corps stabilization structures on his property and neighboring farms.

John also loves to plant trees on their many acres of land that are unsuitable for row crop production. He plants mainly red oak and black walnuts and manages them for eventual harvest. When asked how many trees he thinks he’s planted over the years he just laughed and said “thousands”! This spring alone he purchased 700 trees from the Goodhue SWCD and had his grandkids out for a day to help get them planted. A best guess of total trees John has planted in his day is likely well above 10,000.