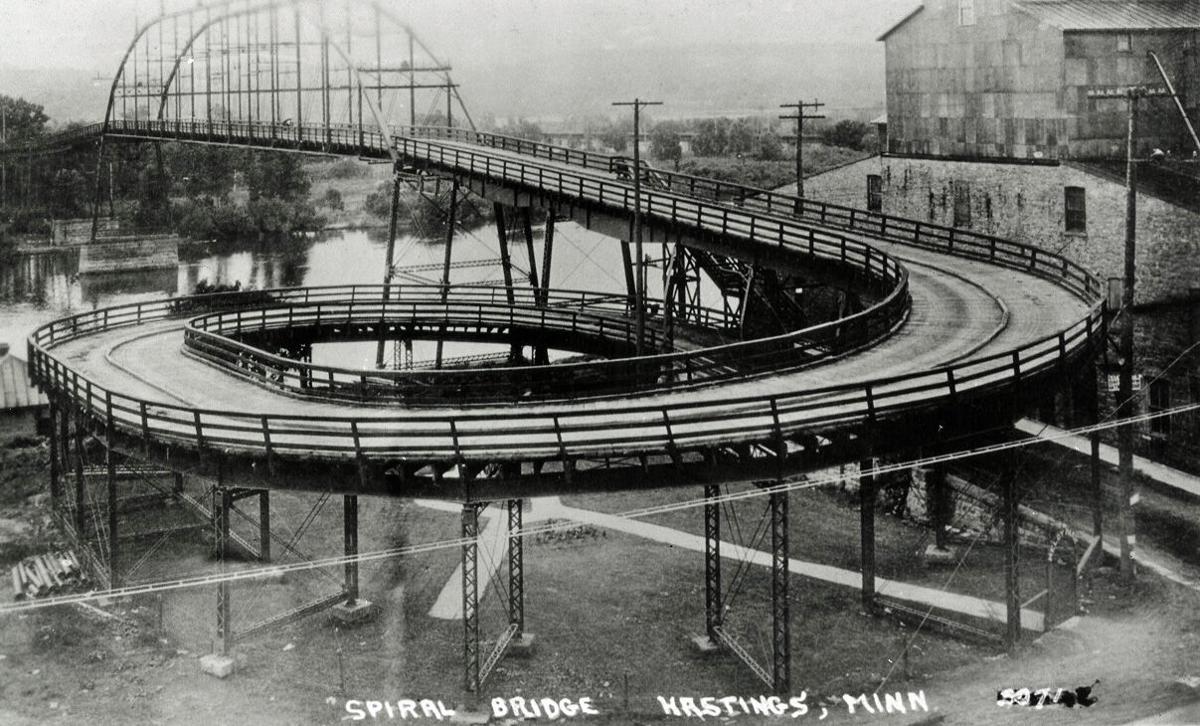 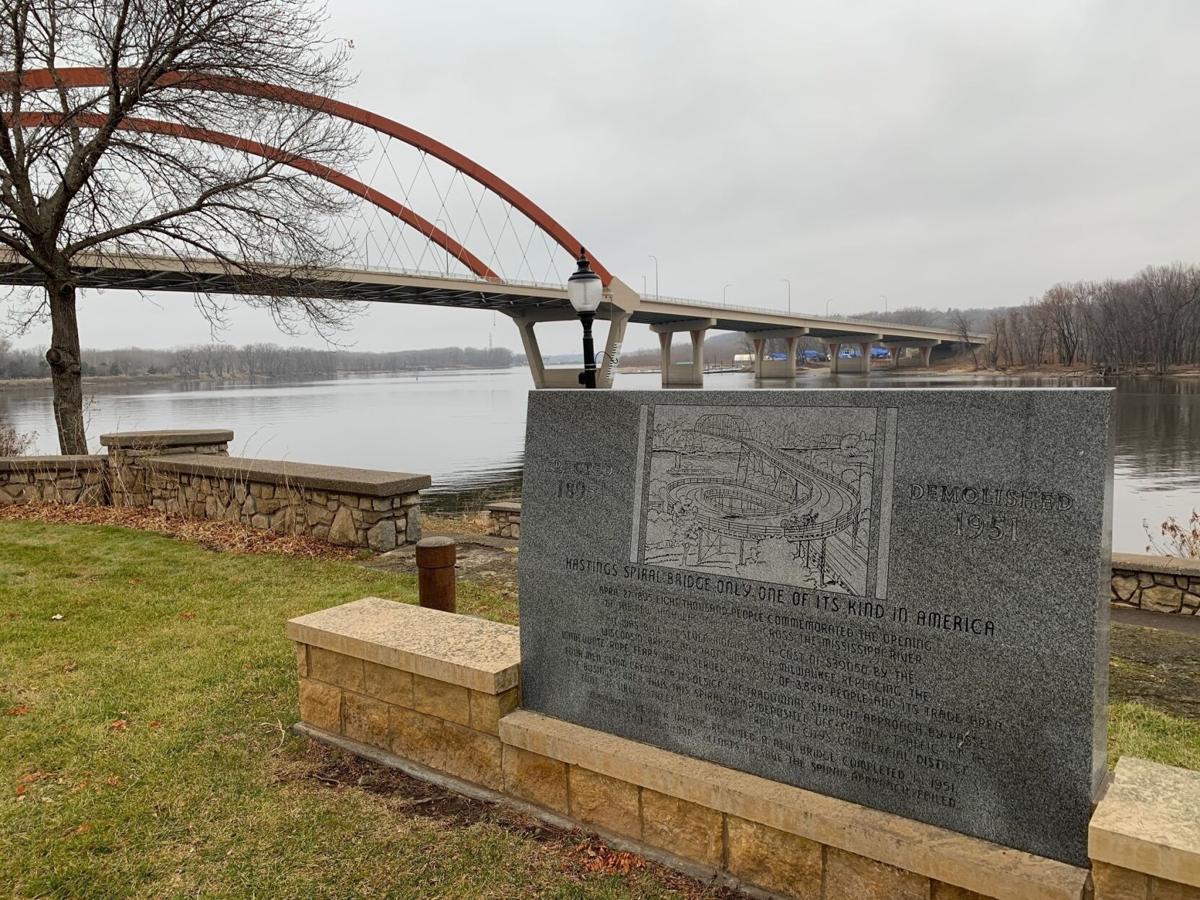 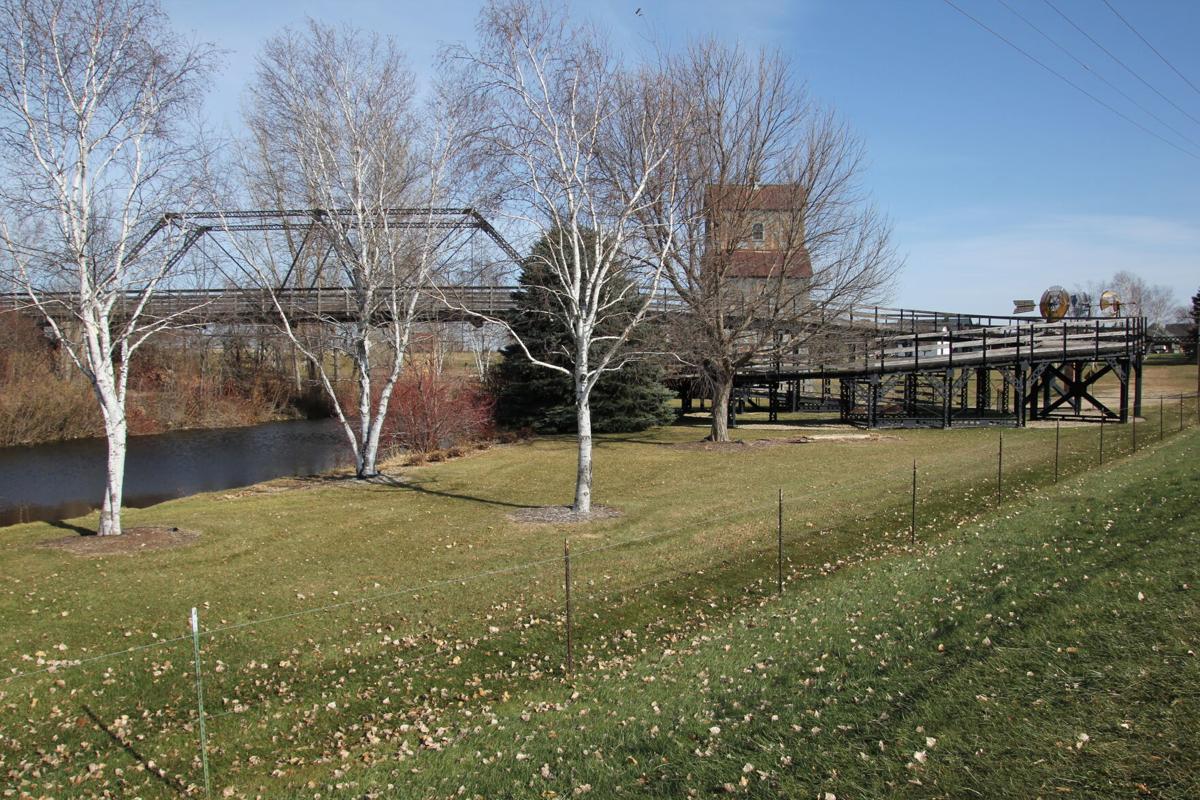 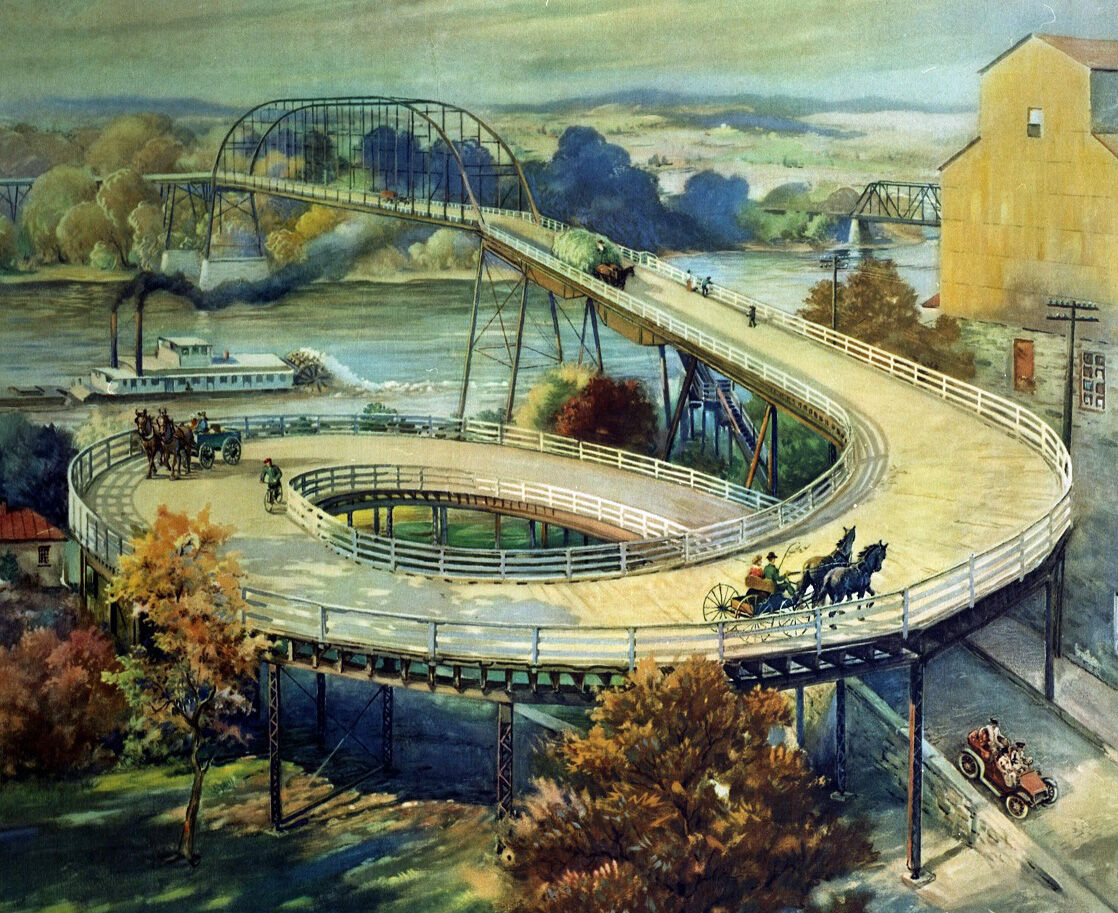 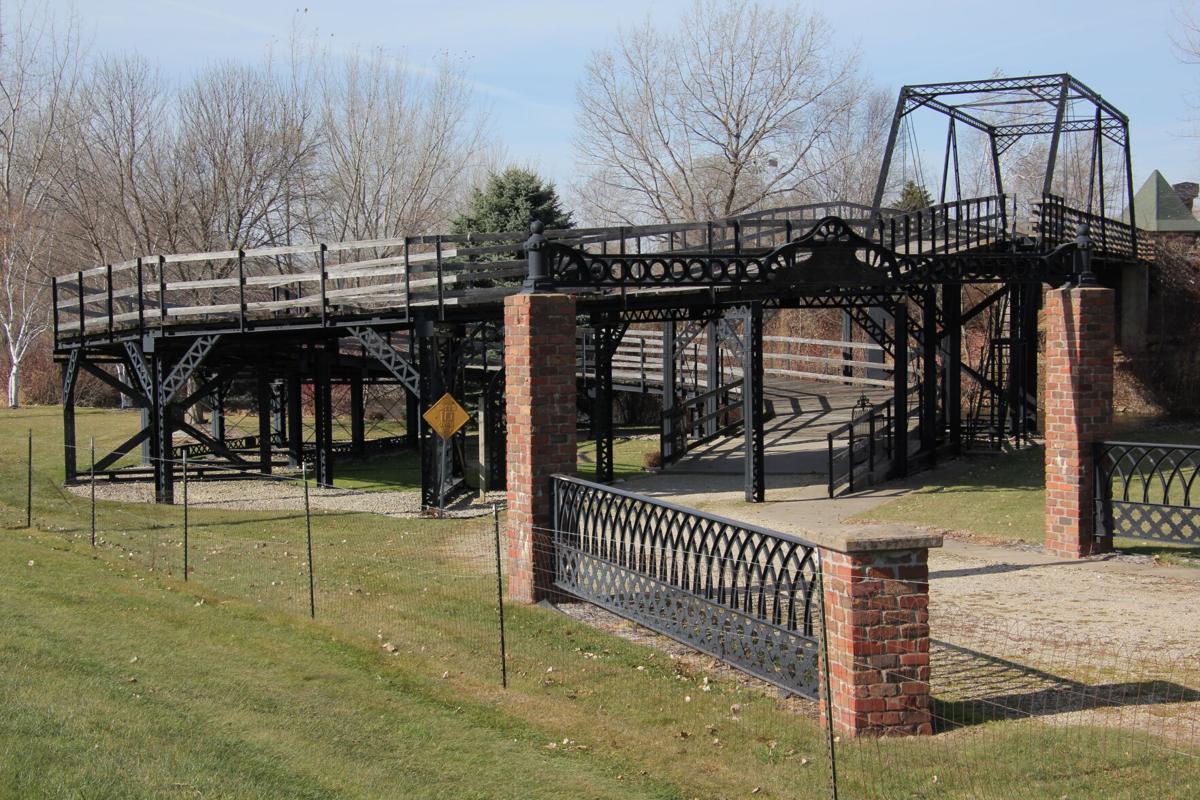 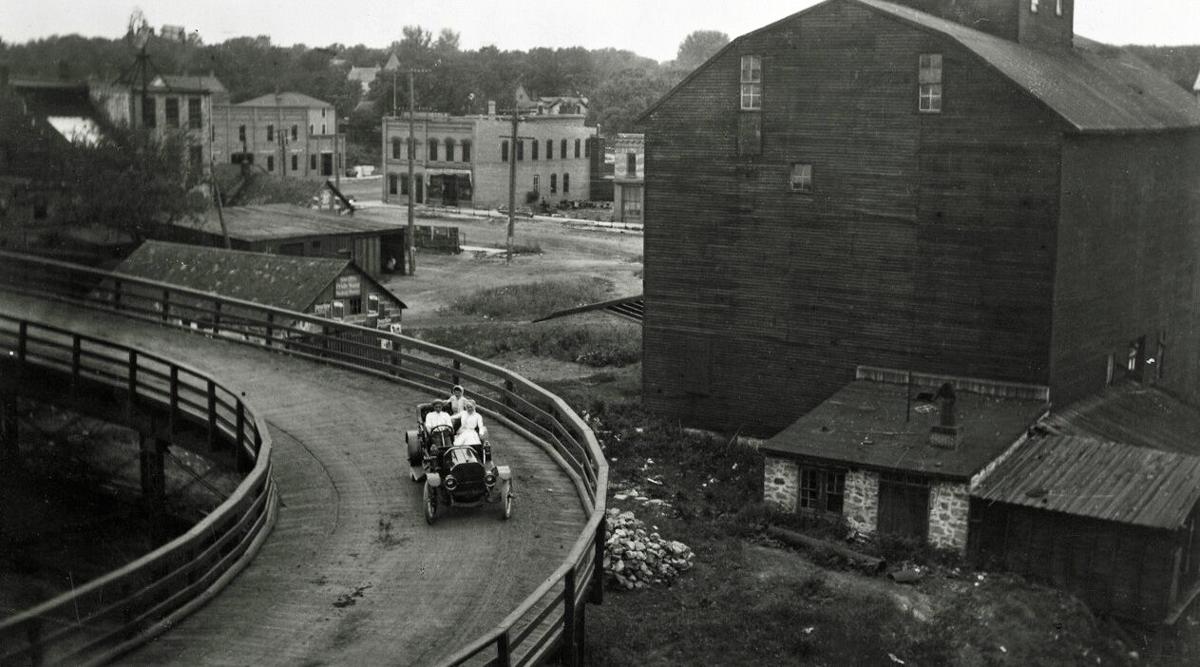 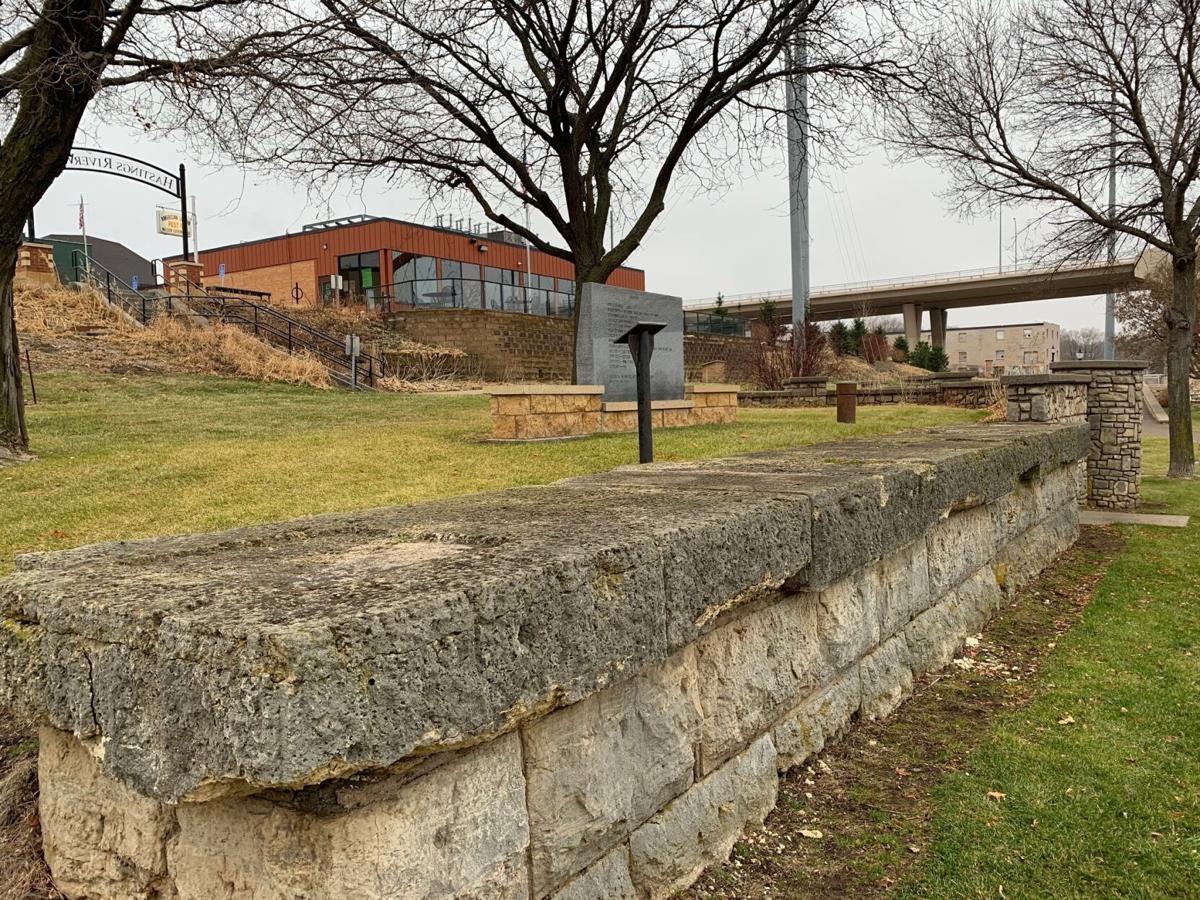 In the 1890s, Hastings was a growing town. Businesses lined both sides of Second Street, and river traffic was increasing. When steamboats stopped at the levee, they were a short distance from the stores, a good boost to the local economy.

Getting across the river was more difficult then. A rope ferry made it possible, but with more people, wagons, and boats arriving, the people of Hastings needed a better way to cross the Mississippi. They needed a bridge.

There was one problem. The bridge needed to be high enough to allow the steamboats to pass under. With that much height, the ramp down on the Hastings side would extend far into the town, well past the business center on Second Street. No one wanted the wagons and horses bypassing downtown.

The solution came in the form of a bridge with a spiral on the southern end. After crossing the river, the bridge would circle north and pigtail around under itself, depositing travelers on Second St.

The bridge would eliminate the rope ferry and give Hastings residents better access to the road north, a dirt passage called the St. Paul-Hastings Wagon Road. It was still gravel when it was renamed U.S. Highway 61 in 1926.

Constructed at a cost of $39,050 in 1895 by the Wisconsin Bridge and Iron Co. and supervised by Oscar Claussen, who is often given credit for the unique design, the spiral was on the north end of Sibley Street where the American Legion Post 47 now stands. The bridge was 1,987 feet long and 14 feet wide, with a 4 ½ foot sidewalk on the east side. The main channel span was 380 feet long and featured a through truss with a curved top chord.

When automobiles arrived in the area, they started using the Spiral Bridge, even though it was designed for wagons, horses, and pedestrians. The increased wear on the bridge raised concerns about its safety. Several attempts were made to repair the bridge, but eventually officials determined that it needed to be replaced, although not everyone agreed.

“The sad tale of the bridge’s demise spanned many years and ended in a pocket veto by Governor Luther Youngdahl in 1951. The Dakota County Historical Society retained attorney David Grannis Jr., who presented a resolution to the State, asking to take title and preserve the approach. A bill nearly to this effect was passed by the Senate and House, but was vetoed by the governor after a lobbying effort to do so by several Hastings businessmen at the Capitol. Dakota County’s famous, if not dizzying, landmark was razed in 1951,” according to the DCHS website.

The Spiral Bridge had lasted 56 years. It was replaced by a steel bridge known as the Hastings High Bridge, which was in place until 2013 when it, too, was replaced by the current arched Hastings Bridge.

The original Hastings Spiral Bridge was dismantled and hauled away, but a replica of the bridge is on display at the Little Log House Pioneer Village, about 10 miles south of Hastings just a short distance east of Highway 61 on 220 Street East. The village is open one weekend a year in July.