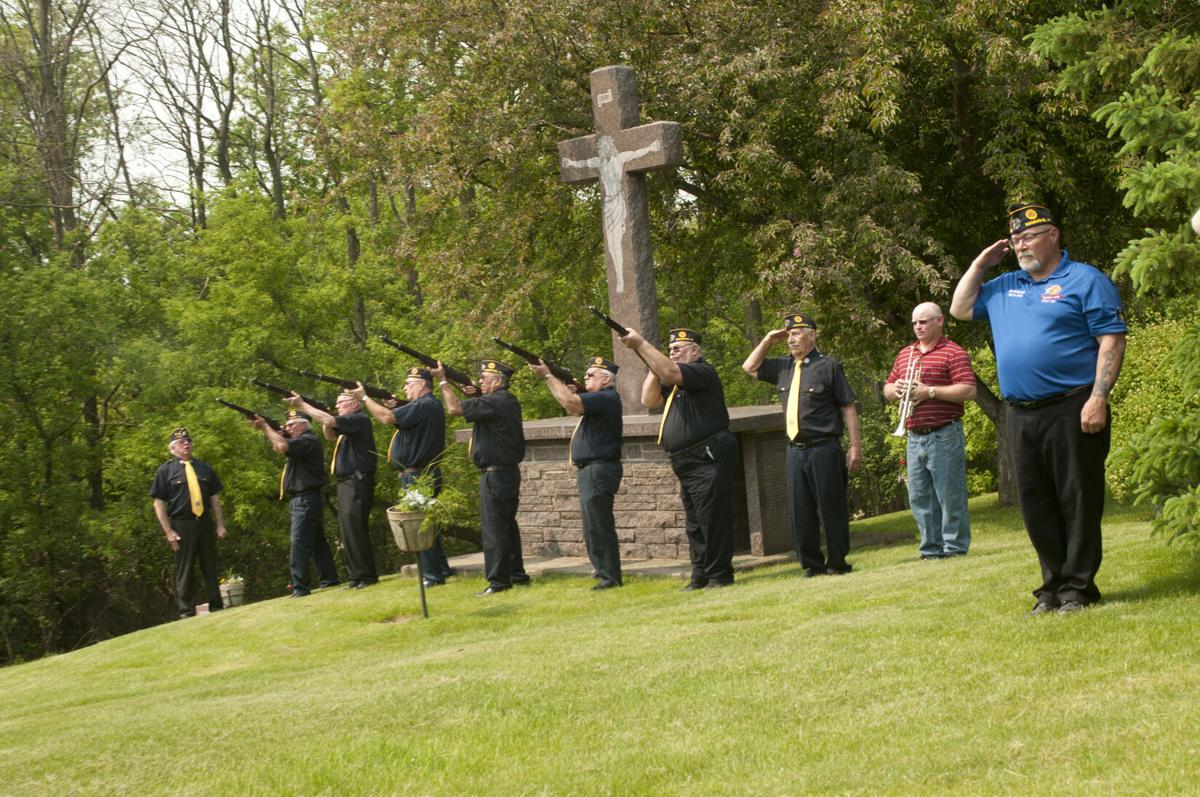 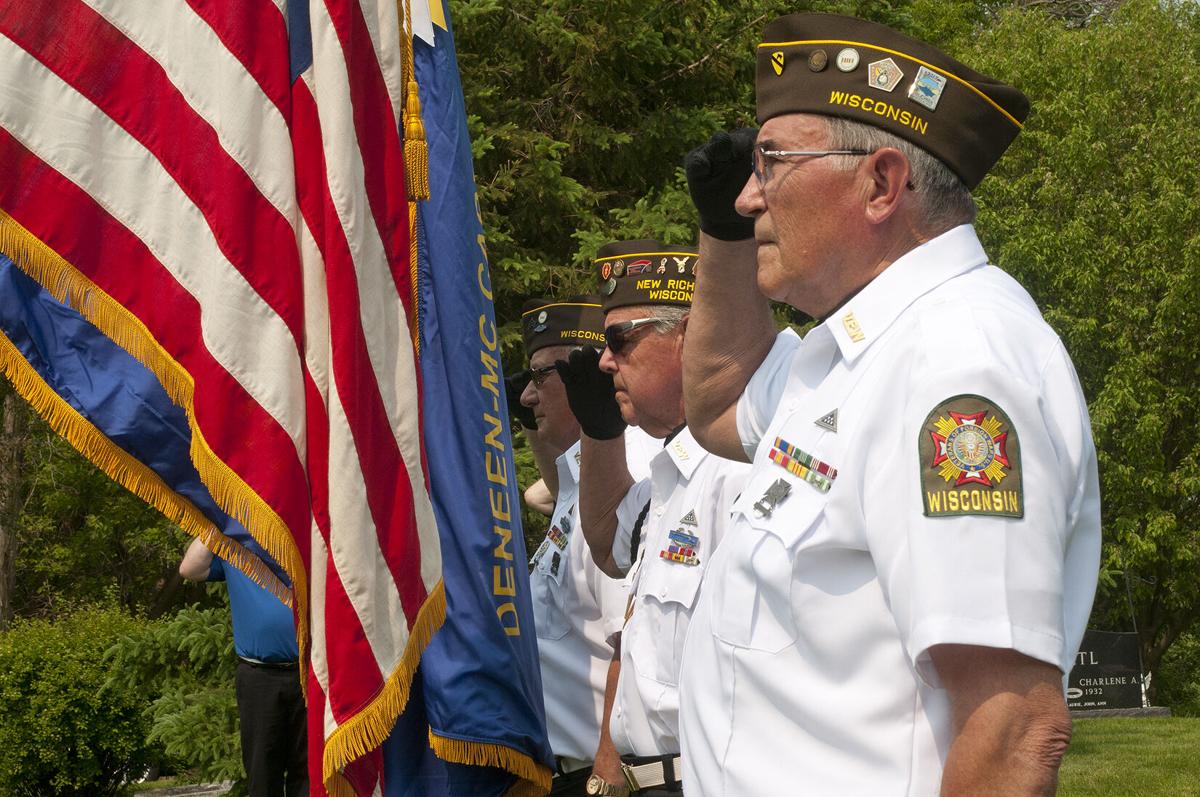 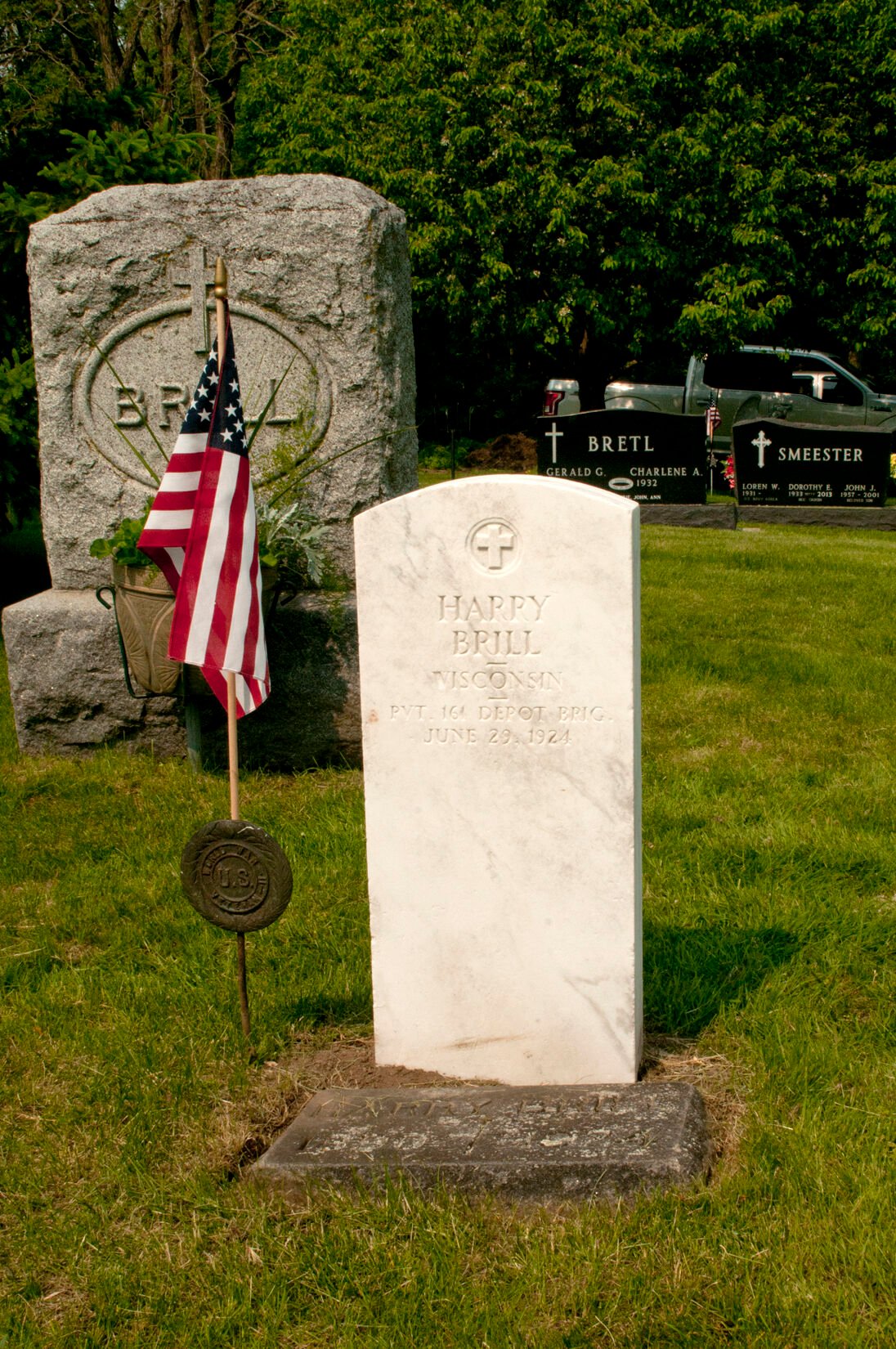 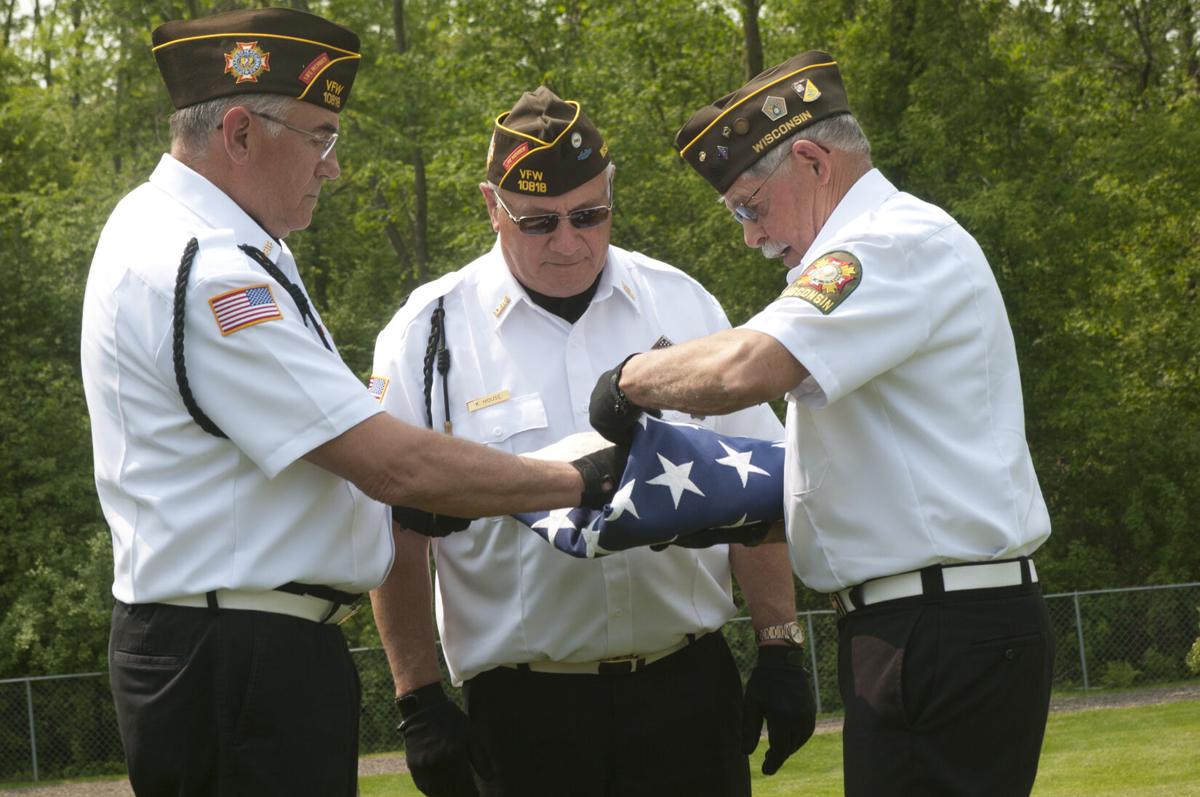 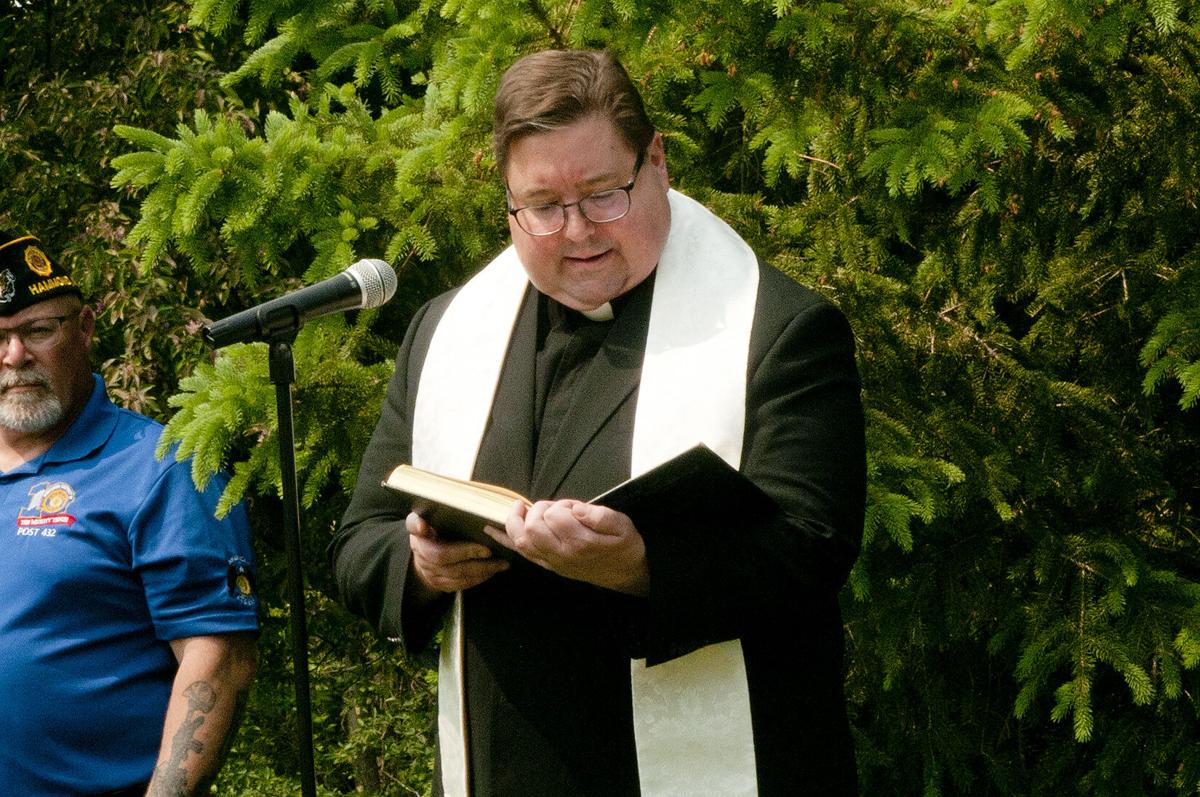 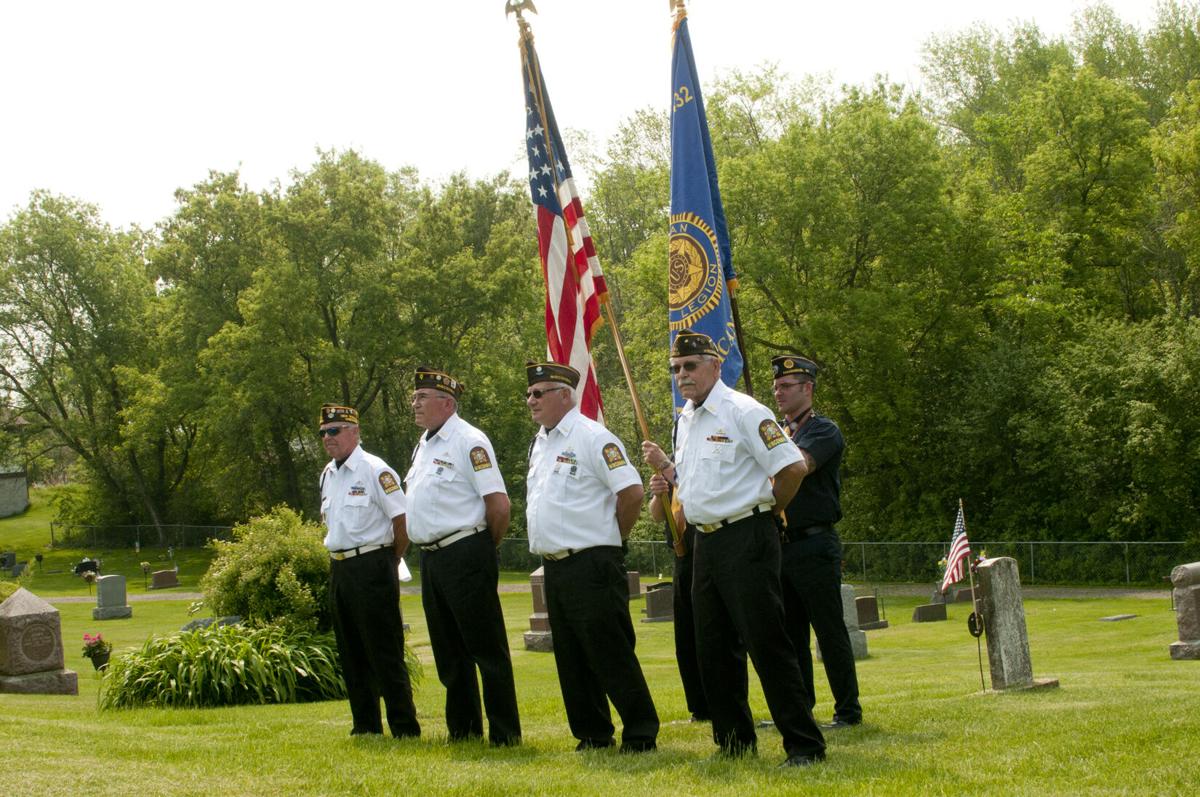 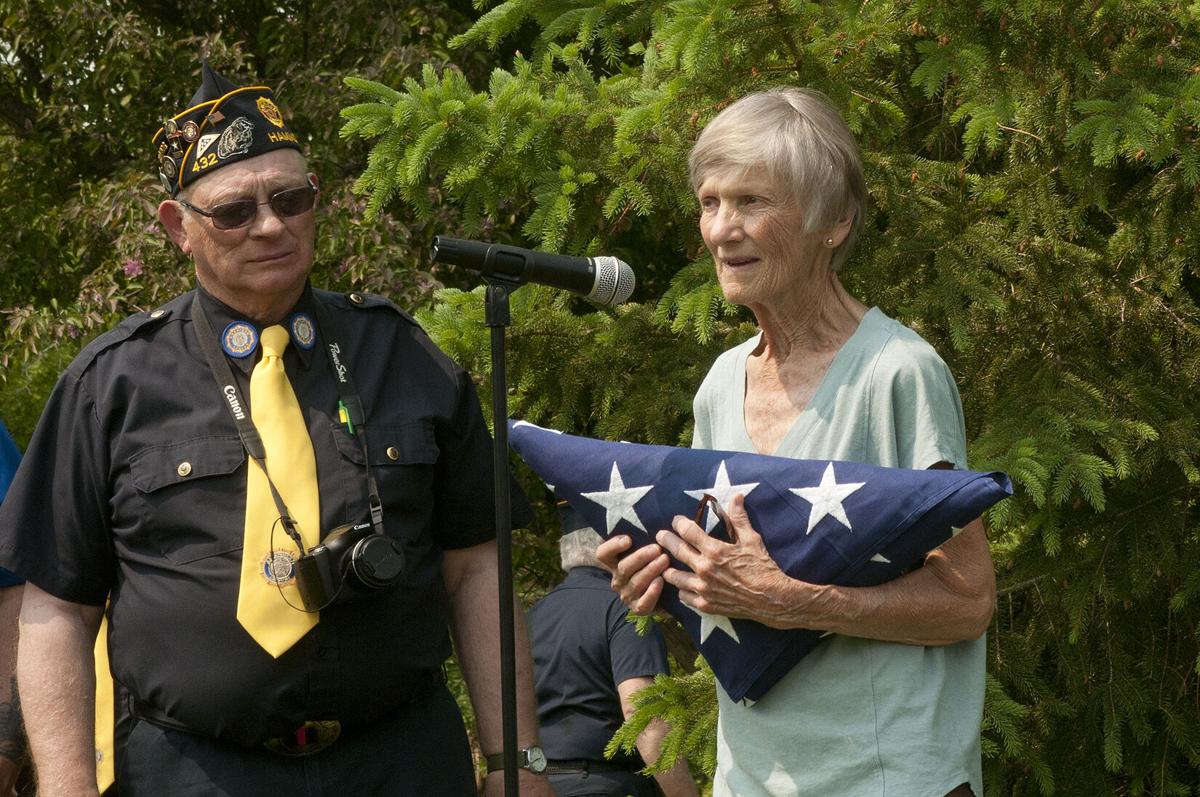 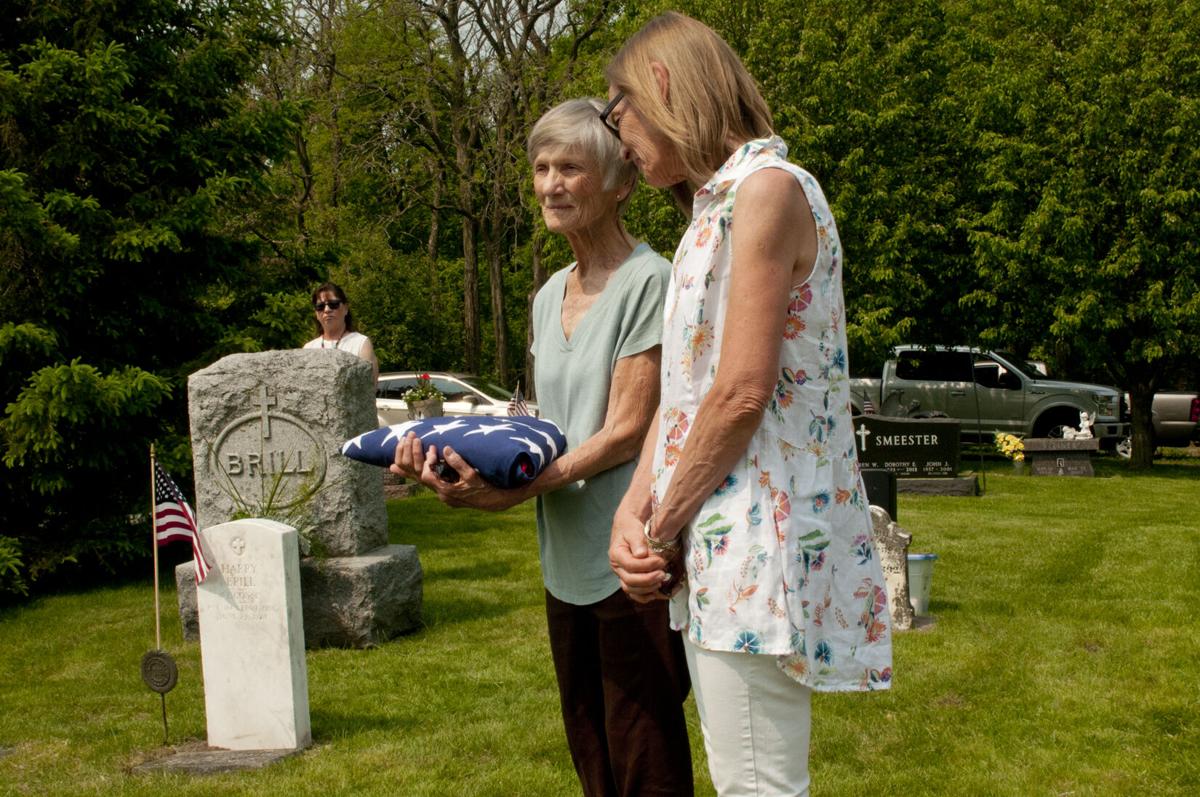 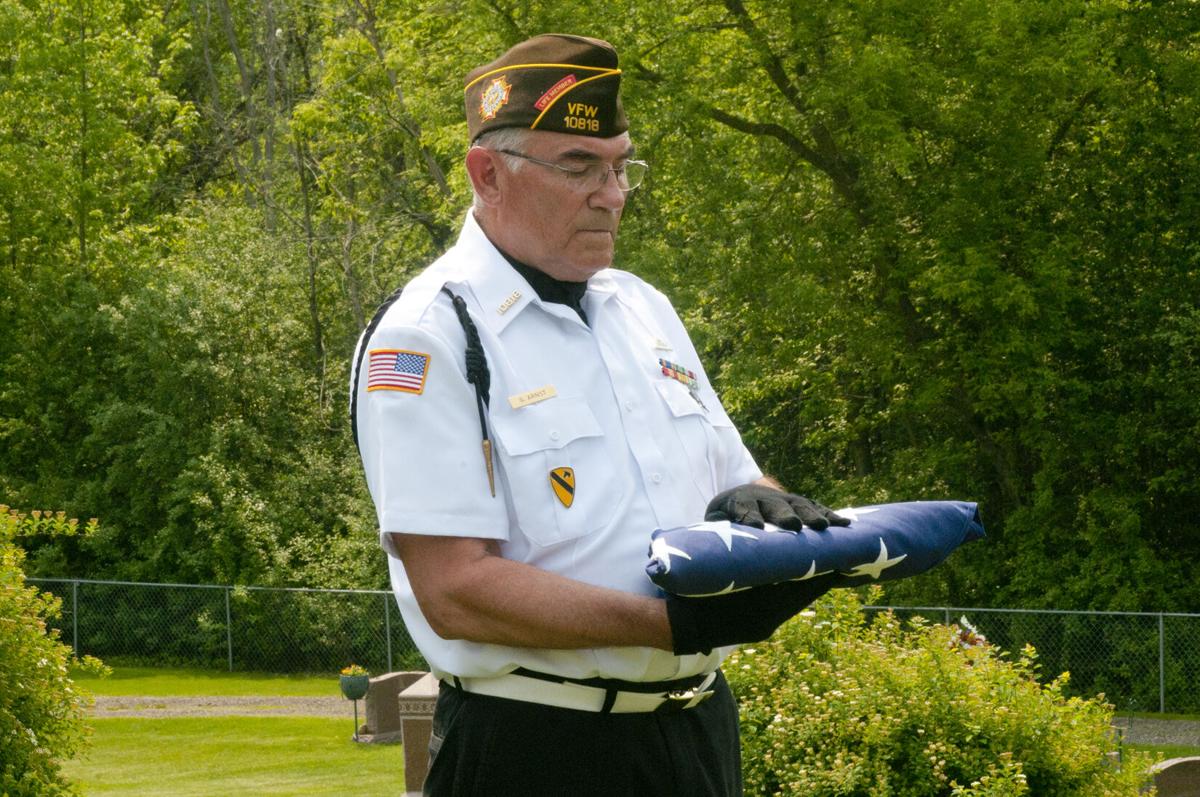 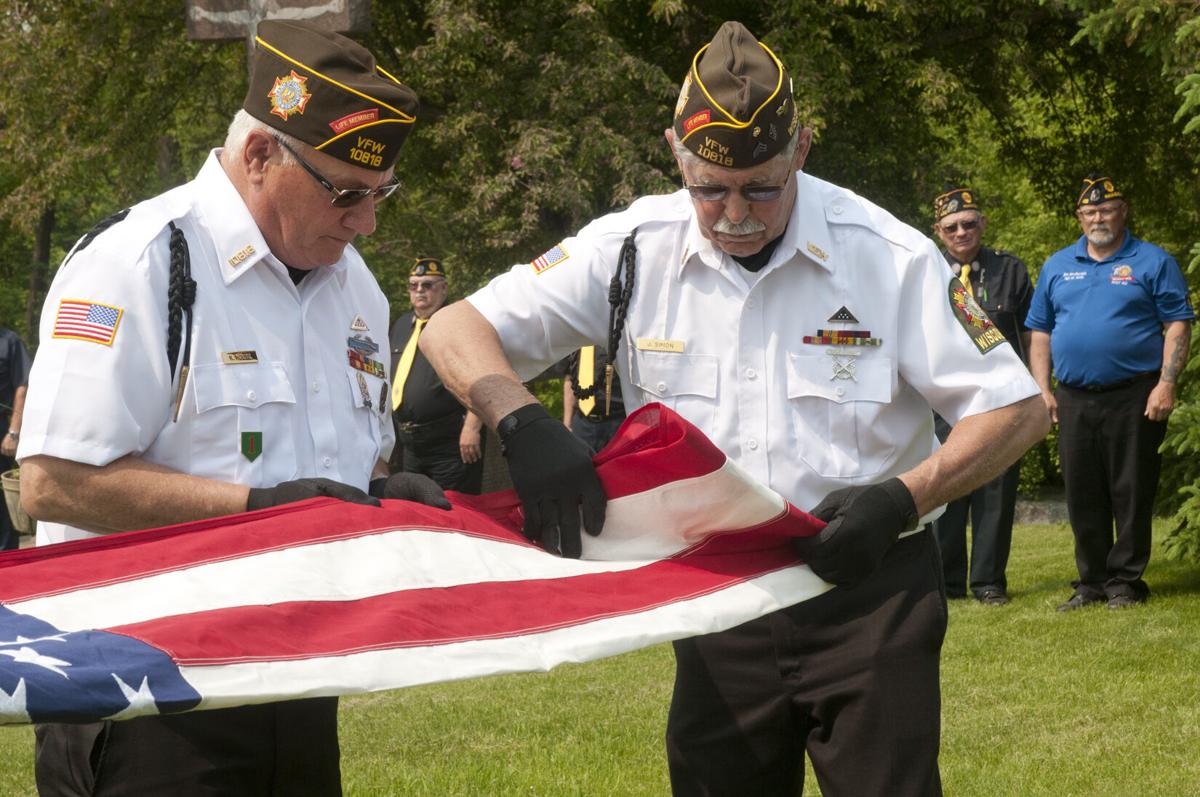 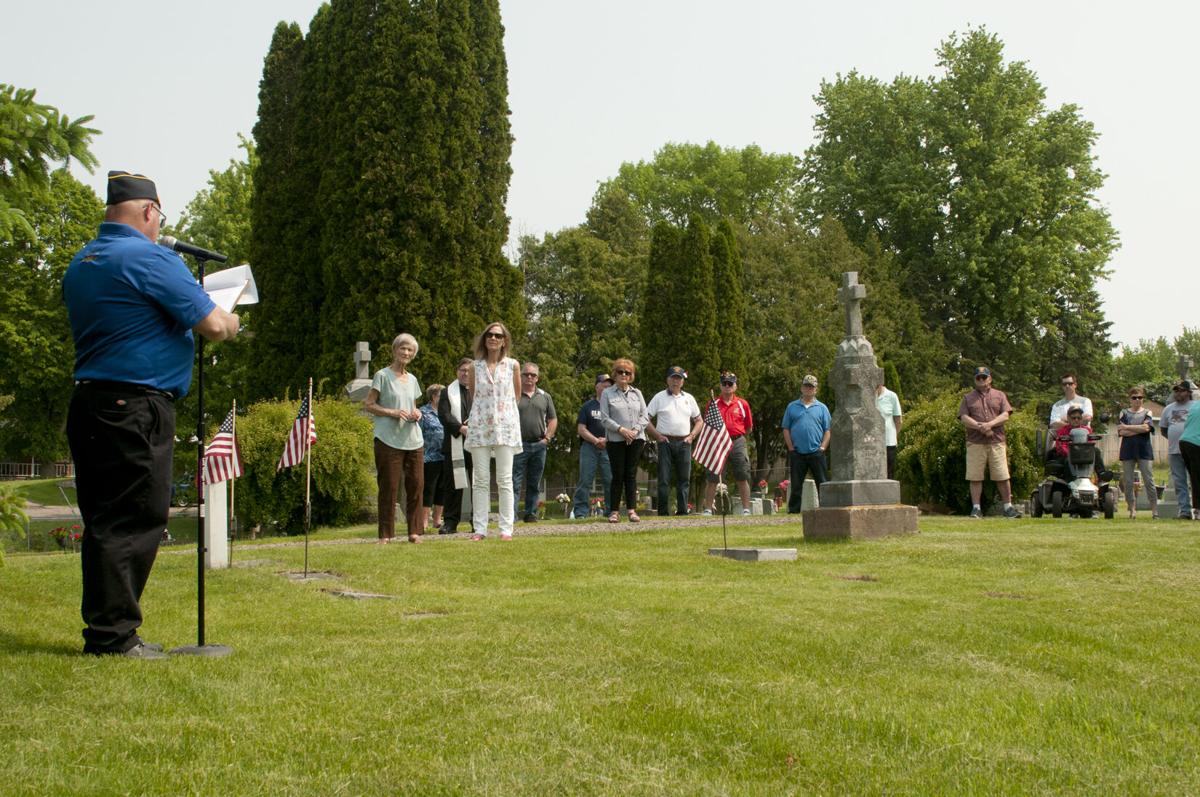 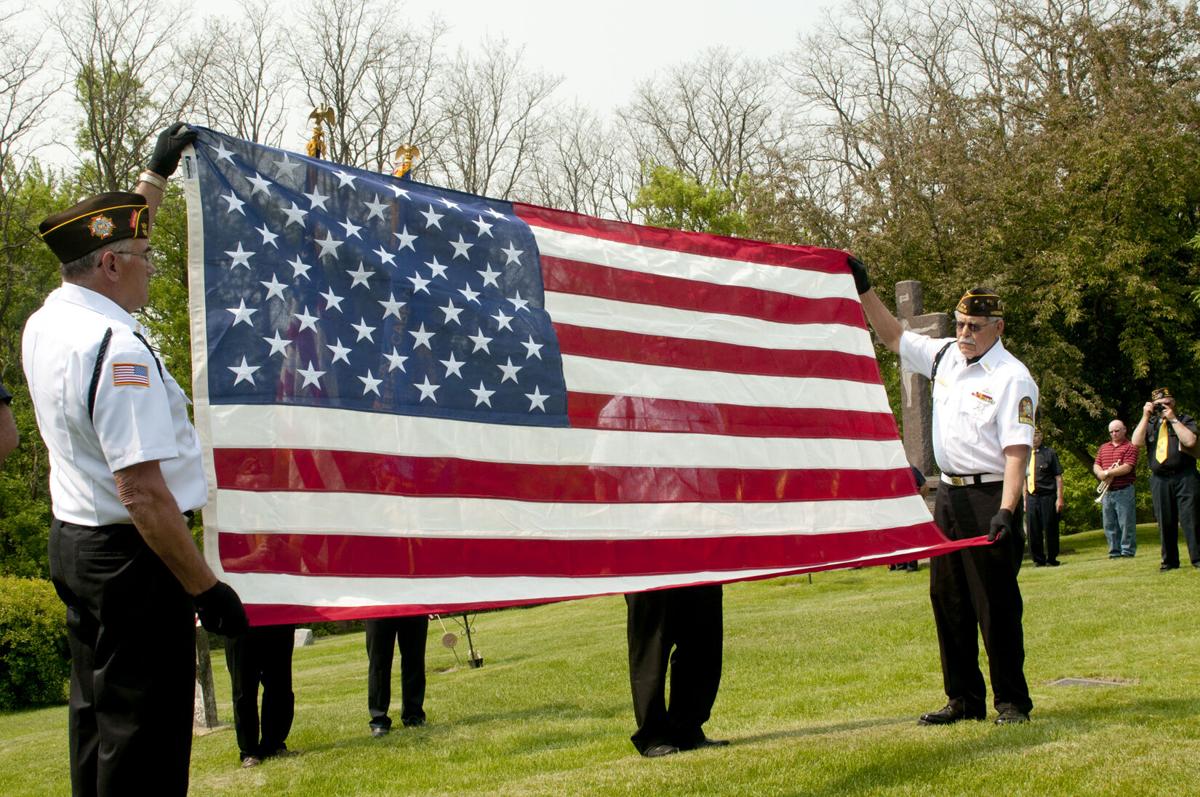 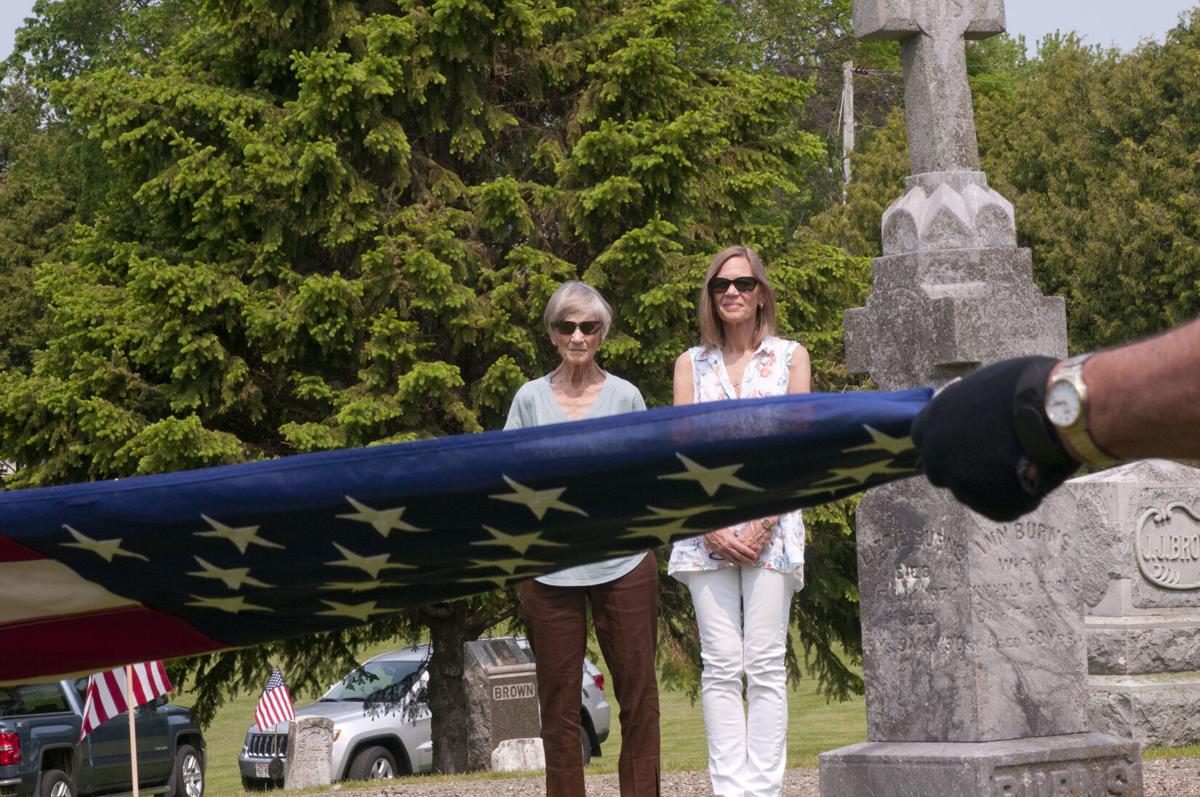 "Man is of few days and full of trouble. He cometh forth as a flower and is cut down. He fleeth also as a shadow and continueth not. Forasmuch as God hath taken out of the world the soul of our departed comrade, we therefore commit his body to the ground to sleep and his soul to endless peace to rest. The dust returneth to earth as it was, and the spirit returneth unto God who gave it. The government of the United States presents to you through American Legion Post 432, the flag under which our comrade served."

With those words, Gerrilee Hafvenstein received the American flag properly folded with 13 folds, while standing alongside the clean, white marble headstone inscribed with an epitaph for her uncle, World War I veteran Private Harry Brill.

The story of the headstone's improbable journey, originally documented by Eau Claire Leader-Telegram reporter Christena T. O'Brien, came to a conclusion Friday afternoon, May 31, at St. Mary's Cemetery in Hammond. The stone had been found in the woods on a town of Ludington property, in Eau Claire County. The property's owner, Gary Kunz, embarked on a journey to lead the stone to its rightful place, which led him to Post 432 Commander Fred Jourdeans. It is still unclear how the stone ended up in the town of Ludington.

There was a reverence in the air as veteran members of American Legion Post 432 Hammond and VFW Post 10818 New Richmond / St. Croix County executed a full military ceremony reuniting the military grave marker with the remains of Brill.

"Today we gather to place a headstone in its rightful place, we finish what Nellie Brill started 83 years ago and to honor not only Harry but his two brothers Hue and Walter as well," said Legion Sgt. at Arms Jim Bevilacqua.

According to Hafvenstein, Harry was one of 12 brothers and three sisters born to John and Nellie Brill on a farm just outside of Hammond. Hafvenstein, who was raised by one of the sisters, never met her Uncle Harry but did meet ten of his brothers including Walter, Billy, Pete, Matt and Frank.

"Not much was said about family life. The boys left home at a young age. Uncle Frank left at the age of 17. Uncle Hue and Uncle Harry were the only ones that I know of that were in the service," said Hafvenstein.

As far as Hafvenstein knows only two of the brothers ever married.

"They made their own lives and had their own stories," added Hafvenstein.

Turns out Harry's brother Walter also served in the military.

According to O'Brien's story, Nellie Brill ordered the headstone from the U.S. War Department in March 1936, 12 years after Harry's death.

"Harry at the early age of 34 had succumbed to influenza in 1924. After his death, Nellie applied for the military headstone in March of 1936. It was delivered to Hammond in May of 1936. Why it never got placed is unknown. Nellie's husband John died 10 months later and Nellie followed two years later in 1939. Whether it was financial or Nellie just never got around to placing the headstone, we'll never know," said Bevilacqua.

Following the folding of the flag, Legion Veteran Bruce Bond presented the flag to Hafvenstein and her daughter, Lauri Hafvenstein.

"I just want to thank everyone who is responsible for this great remembrance. There isn't many of the family left, but there's family following and believe me, we will never forget this. Thank you so much," said Gerrilee.

For most, the relationship to the flag is distant. We see it flying at a bank or a school, recite the Pledge of Allegiance in its presence before a meeting or remove our caps for the national anthem.

It's different when it's placed in your hands, folded meticulously 13 times in honor of a soldier you knew, you loved. You can feel the stitching around each star, the courage imbued in the fabric, the immeasurable sacrifice it requires. Tears falling on the field of blue complete our communion with our fathers and sons, mothers and daughters, brothers and sisters lost on the field of battle.

"It was such an honor. Just holding the flag with the history of the 13 folds, I had no idea. It was hard to hold back the emotions. It feels like a continuation, a way of making a connection with the past and then being able to pass it forward. It's so much more present for us now as a result of what happened here today. It's really an honor to be here today," said Lauri.

"It's indescribable. I never expected this. I wish there was some way I could repay everyone. You can tell everyone put their heart and soul into this project," said a grateful Gerrilee.