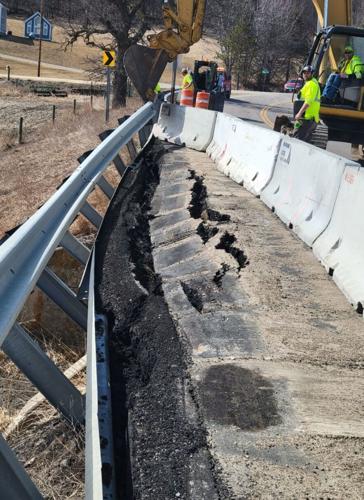 On March 20, the south curb failed and the metal guard rails fell into the water. Photo by Goodhue County. 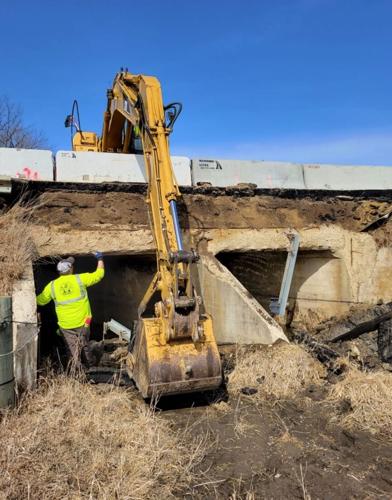 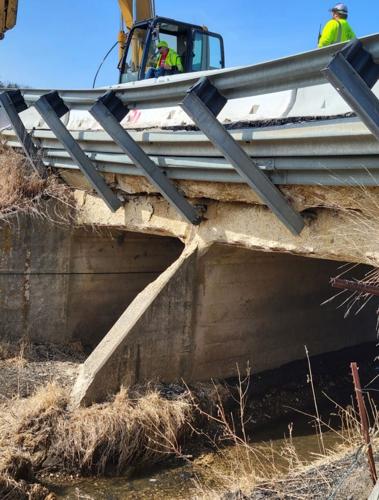 Staff moved the jersey barricades towards the middle of the bridge for improved support. Photo by Goodhue Count

On March 20, the south curb failed and the metal guard rails fell into the water. Photo by Goodhue County.

Staff moved the jersey barricades towards the middle of the bridge for improved support. Photo by Goodhue Count

The Goodhue County Board declared an emergency situation to repair bridge L0463 – on County 11 Boulevard in Roscoe Township – March 23 after the curb and guard failed. Reconstruction is underway and traffic should resume as normal by April 10.

Bridge L0463 is an old poured-in-place concrete culvert and before the incident, county staff noticed that the curbs were deteriorating and the attached metal guard rails were beginning to lean, according to board documents.

Last fall, portable jersey barricades were installed inside the metal guard rails to provide protection for traveling vehicles; however, earlier this year, it was discovered that the barricades were starting to lean out.

On Sunday, March 20, the bridge’s south curb collapsed, and the guard rails fell into the water.

County workers quickly mobilized and moved the jersey barricades toward the middle of the bridge, reducing traffic width down to 16 feet and resulting in “a stop and take turns’ driving condition, according to a report to the county board.

Greg Isakson, public works director, realized the temporary fix was not appropriate for the bridge that carries 800 cars per day and asked the County Board for an emergency declaration.

The board agreed on March 23, and the declaration allowed for a more substantial temporary fix to be done right away, resuming two-lane traffic by April 9-10.

“The temporary bridge rails have been installed,” Isakson said this week. “The road over the bridge is being repaired [currently].”

Although the area will be operational by the end of the week, Public Works plans to order a new pipe and aprons for bridge replacement this fall, costing around $280,000.