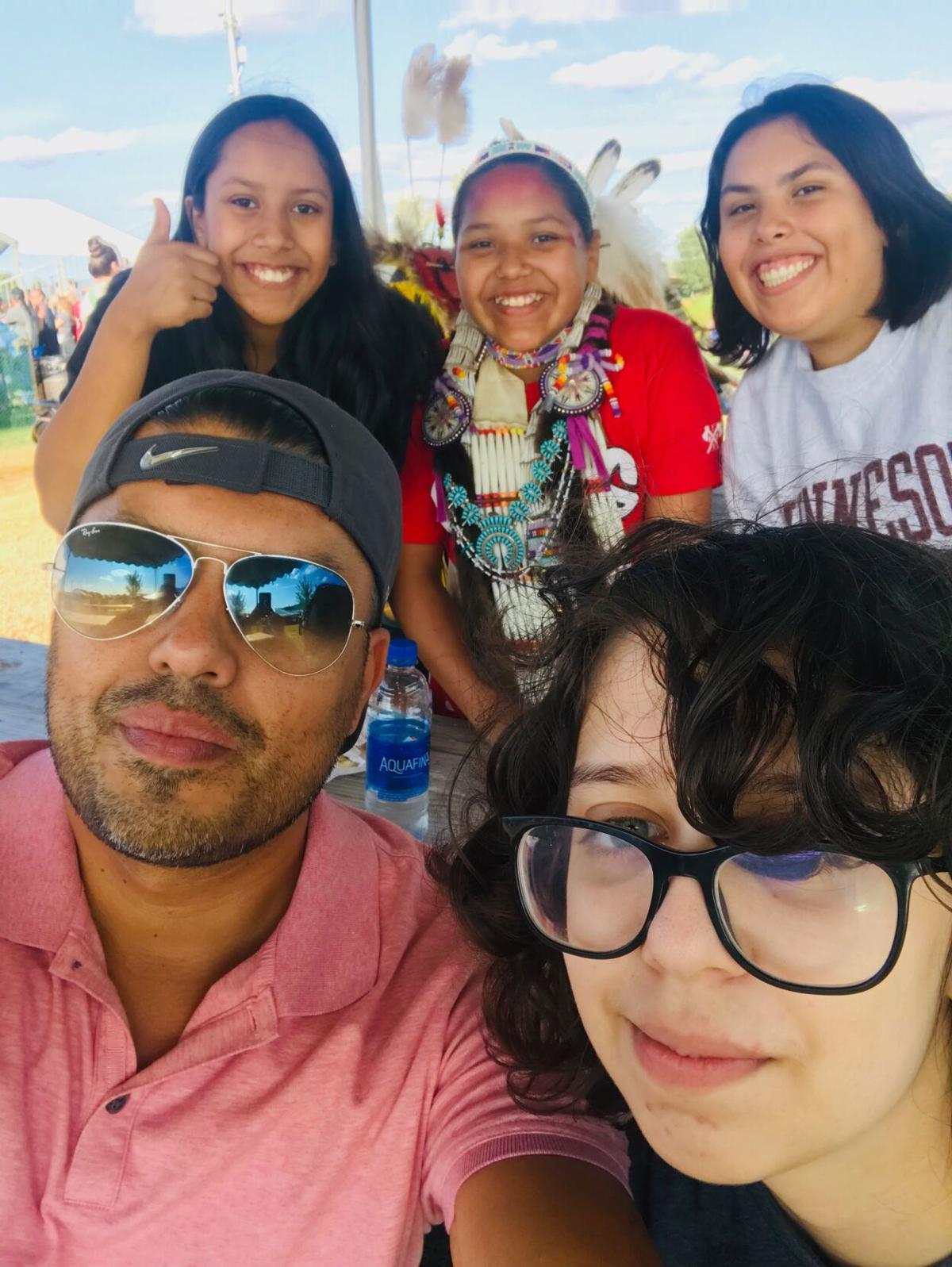 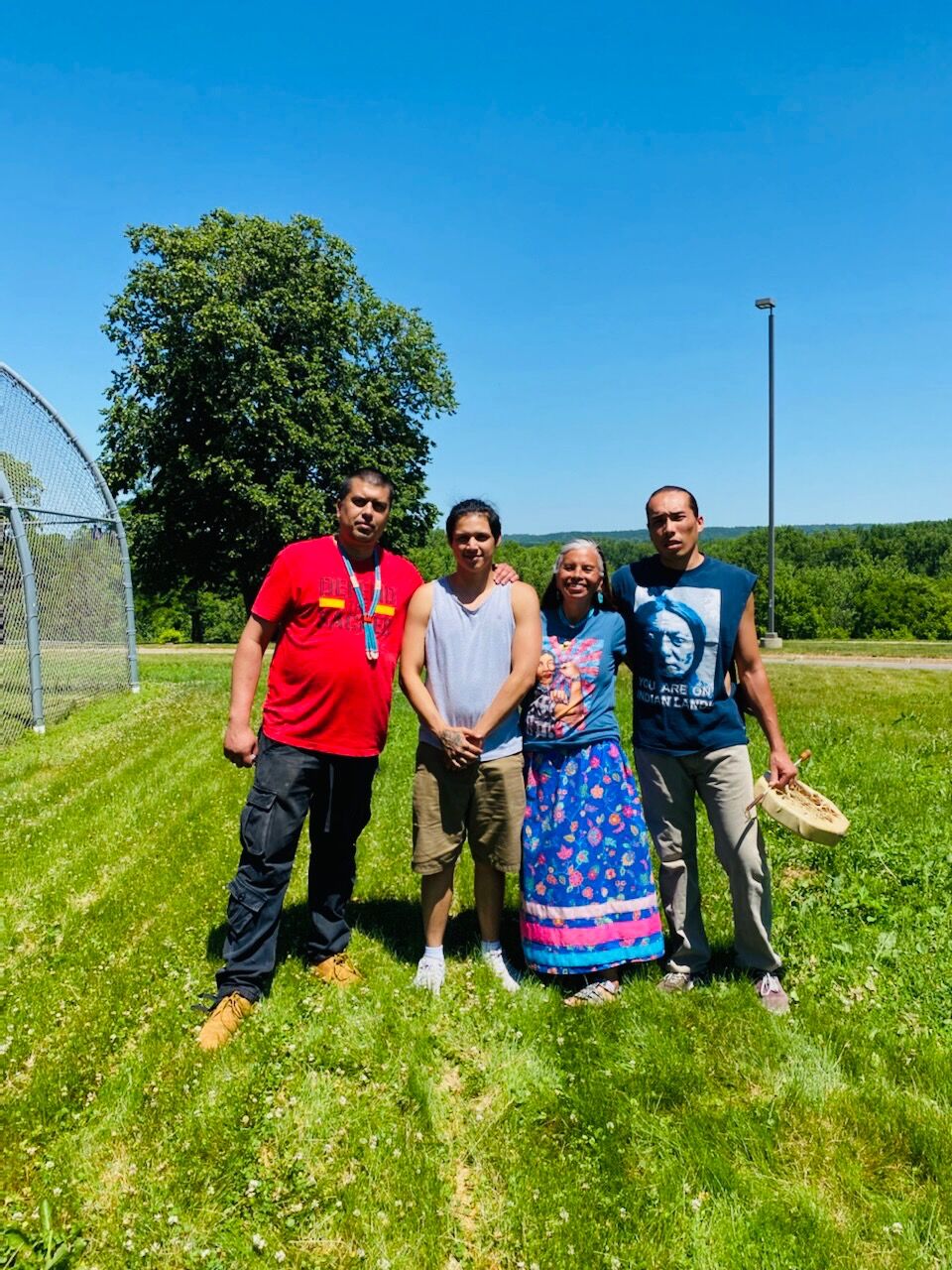 Craig Camp (left) is the 2021 recipient of the Amos Owen Award. Owen was Camp's grandfather. Next to Camp his nephew Devan Camp, his mother Stephanie Autumn, and his younger brother Austin Owen.

RED WING-- The Amos Owen Award for Human Rights was established 20 years ago. This year, Owen’s grandson, Craig Camp, was the recipient of the award.

Camp volunteers at Minnesota Correctional Facility in Red Wing. He works with individuals in the American Indian Prison Project.

Elise Goebel, the volunteer coordinator for the facility nominated Camp. She wrote in the nomination, “American Indian youth at MCF-Red Wing are placed here by counties all over the state of Minnesota. The geographical distance from many of their homes makes it extremely difficult for families and support systems of these youth to visit. It has been difficult for our staff to provide the much needed culturally specific mentoring and programs for these young men. Craig Camp’s dedication to these youth fills that gap.”

When volunteering with the AIPP, Camp provides ceremonies, including pipe ceremonies and sweat lodges. He mentors and meets with youth in AIPP one-on-one. Camp explained to the Republican Eagle, “pretty much I enforce that there are better things out there for them and they just made a mistake. And they can learn from that mistake and move on from that mistake.”

COVID-19 put a halt to all volunteers allowed into the correctional facility. However, this didn’t stop Camp from continuing his work.

“I knew we weren't doing enough. I knew there had to be something we could do,” he said. “And so I talked to my younger brother, Austin Owen. And I just told him my idea, I said, ‘Hey, what if we do a pipe song ceremony outside the fence?’”

Camp, Owen and other family members began holding ceremonies on the outside of the correctional facility’s fence. The ceremonies are not just for Native American youth in the facility but everyone.

Camp told the Republican Eagle, “Miss Goebel said, ‘What do you think about the other residents coming out?’ The way we were taught by our Grandpa Amos, my Uncle Ray, is that… the way they run the sweat lodge is for all races, you know, they’re there to help everyone no matter what color they are.”

The outdoor ceremonies saw an increase in participants. Camp reflected that at one time there were close to 100 people and only about four of the youth were connected with AIPP.

While Camp focuses on incarcerated youth, his mentorship does not end when they leave the correctional facility. He said that he gives the youth his contact information shortly before they leave and then it’s up to the students to decide if they want to continue meeting with Camp and his family.

During the award presentation on Monday and Camp’s conversation with the Republican Eagle, the importance of family in his life and work was at the forefront. Camp told the City Council that when Goebel informed him that he had been nominated for and won the Amos Owen award, “A big smile came over my face. Not because I won an award for what I do, that’s not why I do it. It’s because it was Grandfather Amos’ award.”

Camp told a reporter later that he was young when Owen died but he remembers lessons from him.

“We had people come down to the house every day of the week for help, and he never turned nobody away,” Camp said. “... And he was just so gentle to everyone and open. Anyone who showed up for help, he’d help them. “

Art Owen and Stephanie Autumn, Camp’s parents, also were active in the community.

“I knew anytime someone came and asked me for help, to always show up,” said Camp.”Because my mom and dad taught me that, to be a good relative.”

History of the Amos Owen Award

Since 2001, the annual Amos Owen Award has recognized individuals in the Red Wing area for t…

When asked if he had anything else to add at the end of the interview, Camp said of his volunteer work, “Anybody can do this… and those kids need people and any common person could go in there and give an hour of their time once a month. It would help those kids so much just to have role models to look up to, have someone to show them that they care about them. … That’s someone’s kid. That’s someone’s son. That’s someone’s grandson.”

In her nomination form and at the Red Wing City Council meeting, Goebel stressed the positive impact Camp has on the lives and futures of the youth he serves.

She wrote, “The message he continues sending to our youth is that he is praying for them, no matter what mistakes that they have made in the past and that they have bright futures ahead if they surround themselves with positive influences.”