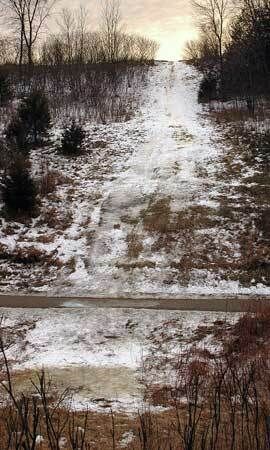 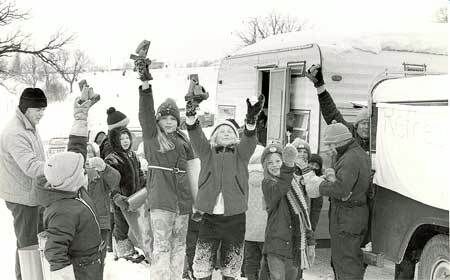 Coon's Hill in Hudson has provided many youths with spills and thrills, probably going as far back as the beginning of Hudson history.

Ironically, there is little information recorded about Coon's Hill. According to city officials, the site was deeded to the city from an organization that had a "boys camp."

Many Hudsonites describe their first venture down the hill with words ranging from "fun" to "sheer terror."

The original Coon's Hill was nestled in an area surrounded by residential homes just off Knollwood Drive, near Wisconsin Street. It still lies somewhat east of the Willow River Cemetery and is owned by the city of Hudson, but it is much smaller than what many old Hudsonites may remember.

The huge sliding hill once covered about 10 acres of land and offered a wide expanse for sleds and skis. The current facility covers about 2 acres and offers just a single, narrow sliding hill.

It wasn't just a sliding hill in the old days. There was a version of a ski jump, or ski slide, for many years and in 1949 a new jump and rope tow were installed. The hill was used for skiing, tobogganing, sliding, etc.

The Junior Chamber of Commerce spearheaded the 1949 project that included the construction of a ski jump at the site. Unfortunately neither the tow nor the jump survived too long - probably not much more than a decade, if that.

One of the early accounts of Coon's Hill came in the Dec. 15, 1932, edition of the Star-Observer when it was reported: "The first ski tournament of the season will be held on the new runway on Conn's Hill next Saturday afternoon. The hill and slide has been greatly remodeled."

In a column written by Willis H. Miller, the late publisher of the Star-Observer, in December 1946, he reminisced about sliding on Coon's Hill as a child. In a Christmas column Miller wrote: "After I was of school age, Christmas always meant the annual two week's vacation, which was well taken up with little parties, sliding, skating and tobogganing out at Coon's Hill..."

If anyone has historical background or information regarding Coon's Hill, contact Doug Stohlberg at (715) 386-9333 or hsoeditor@rivertowns.net.