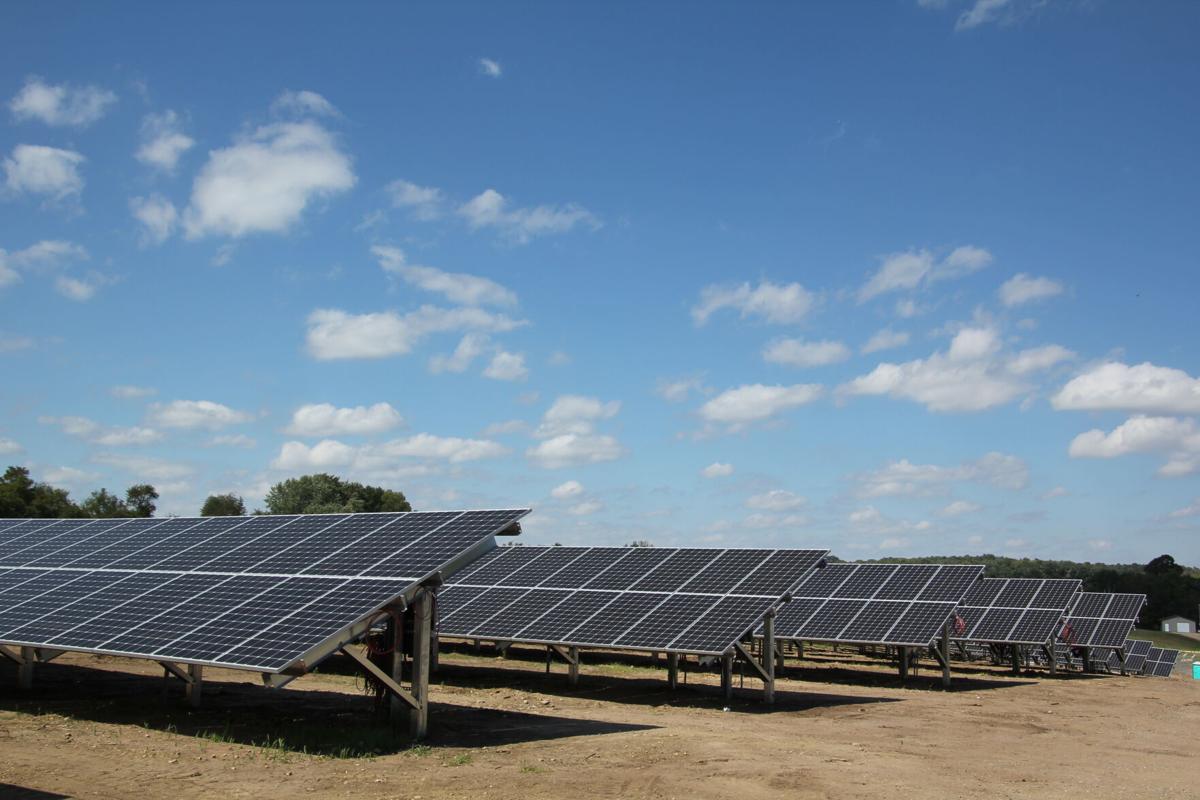 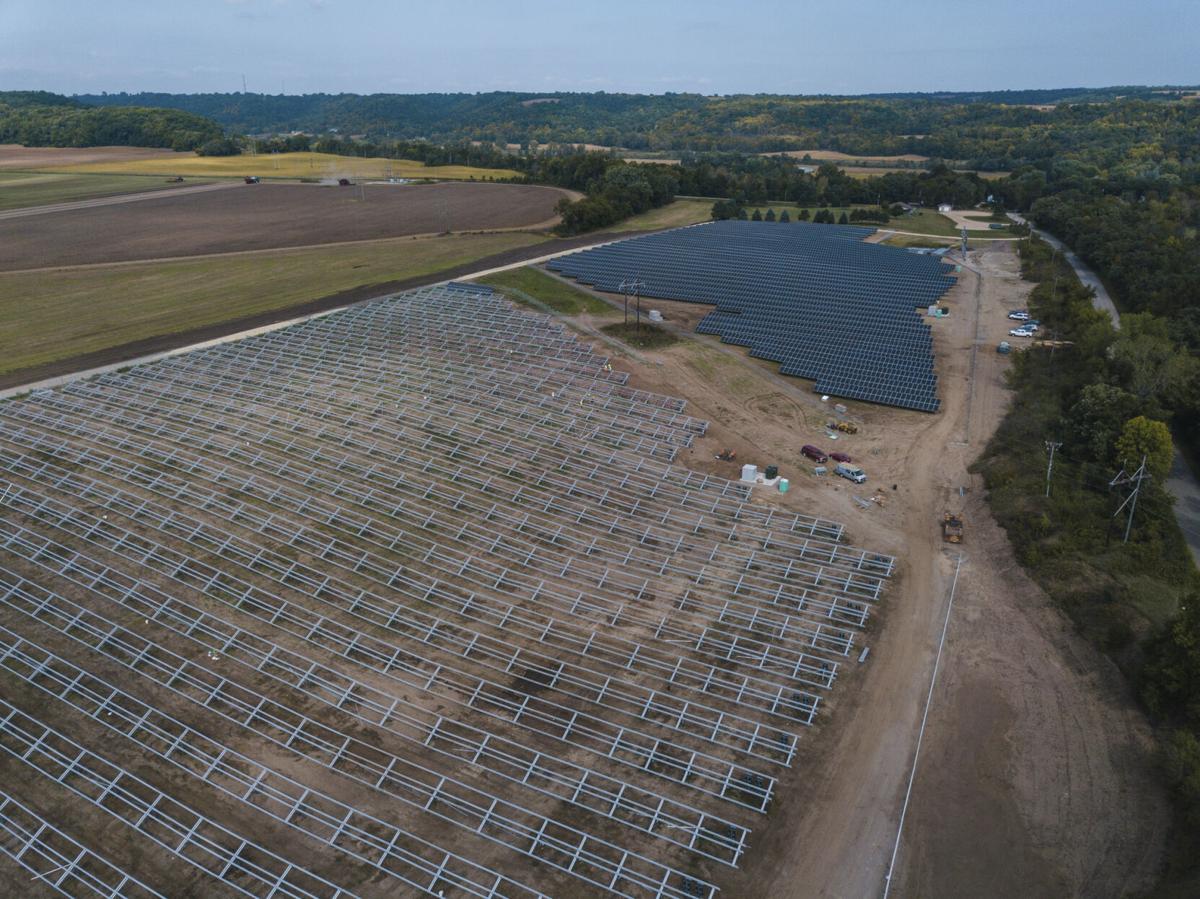 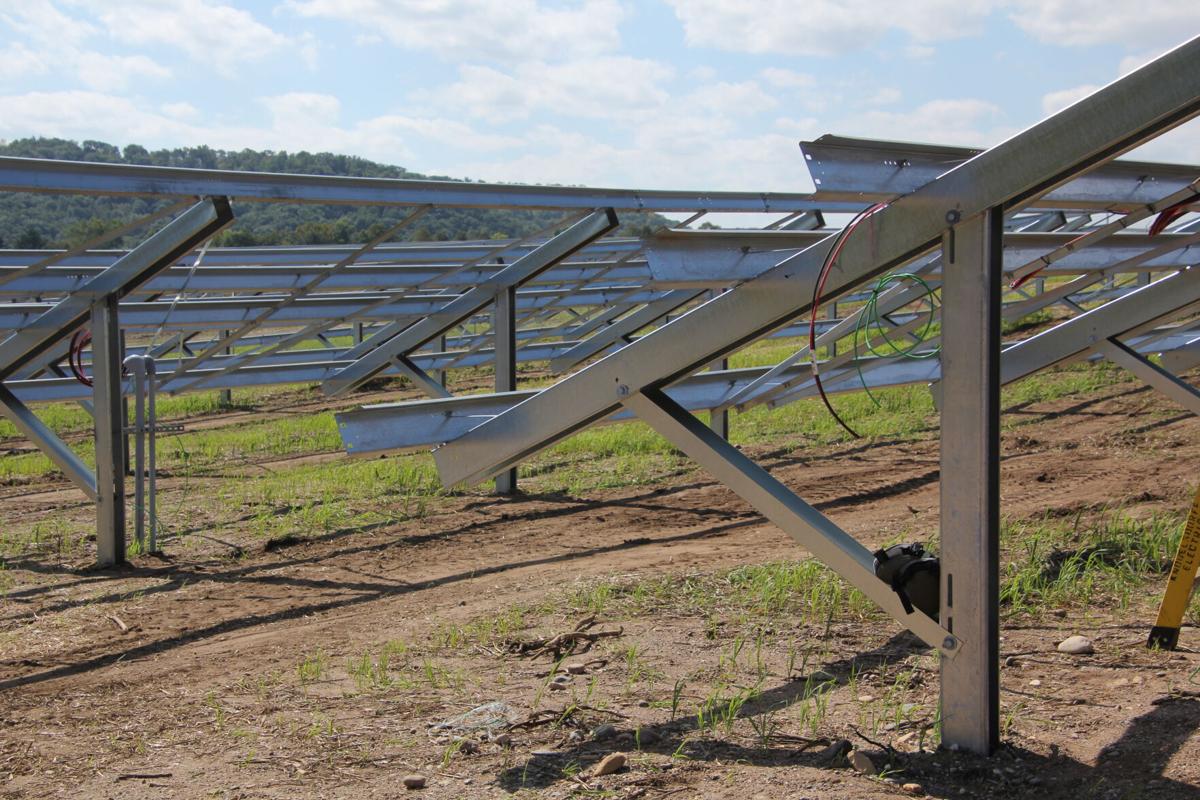 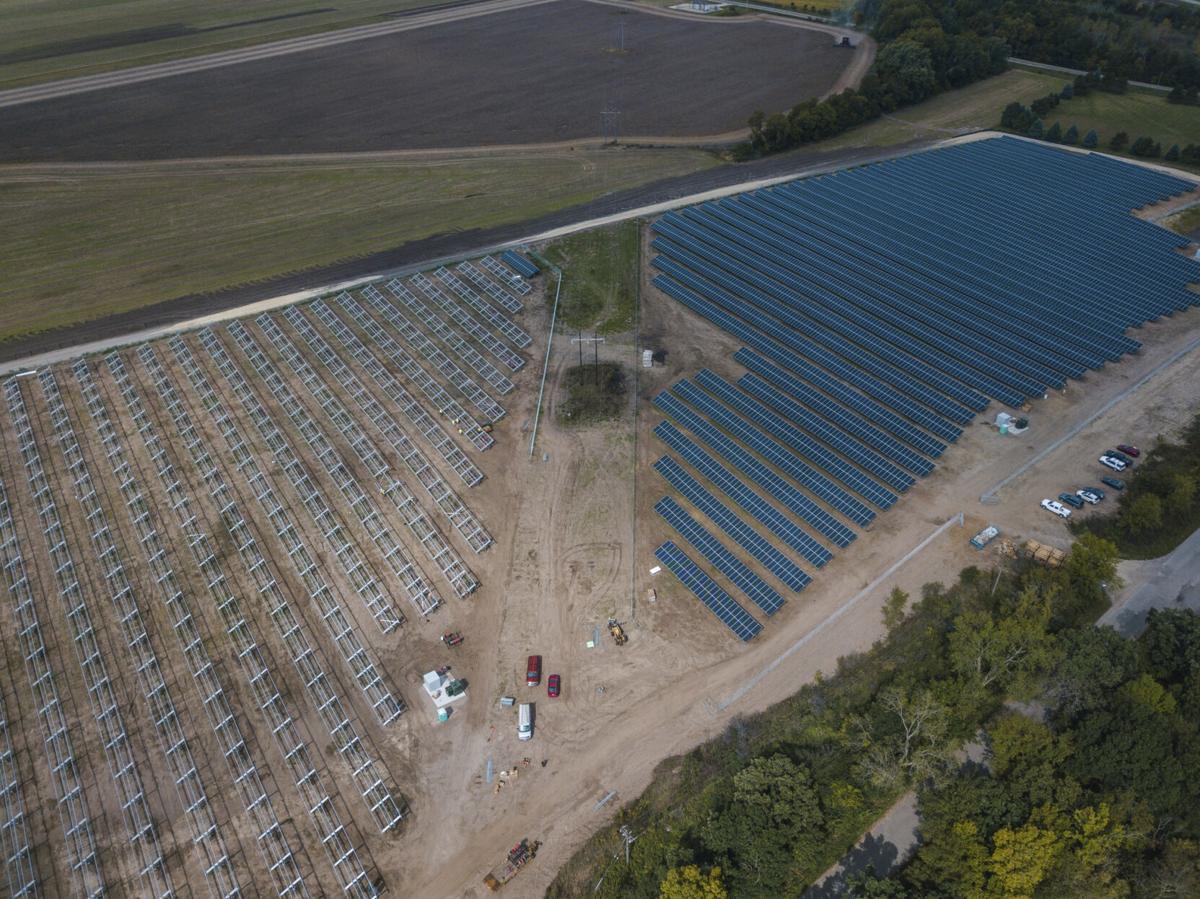 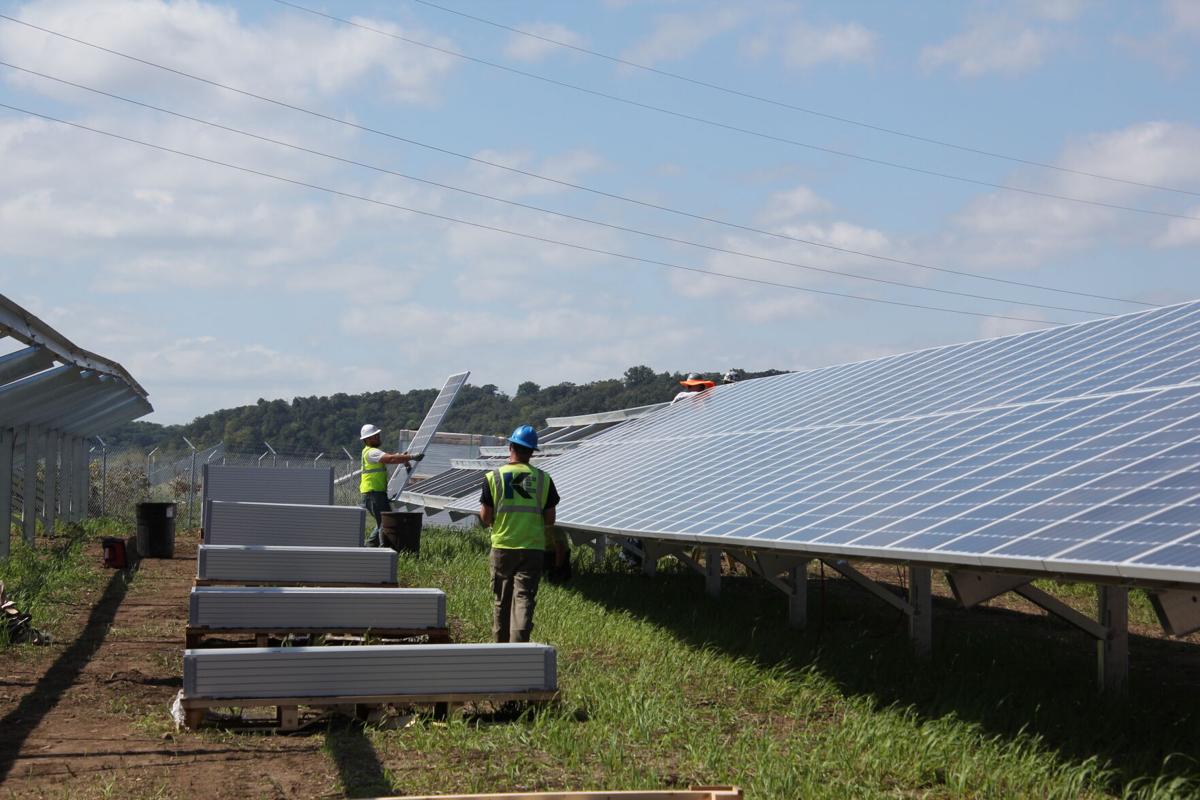 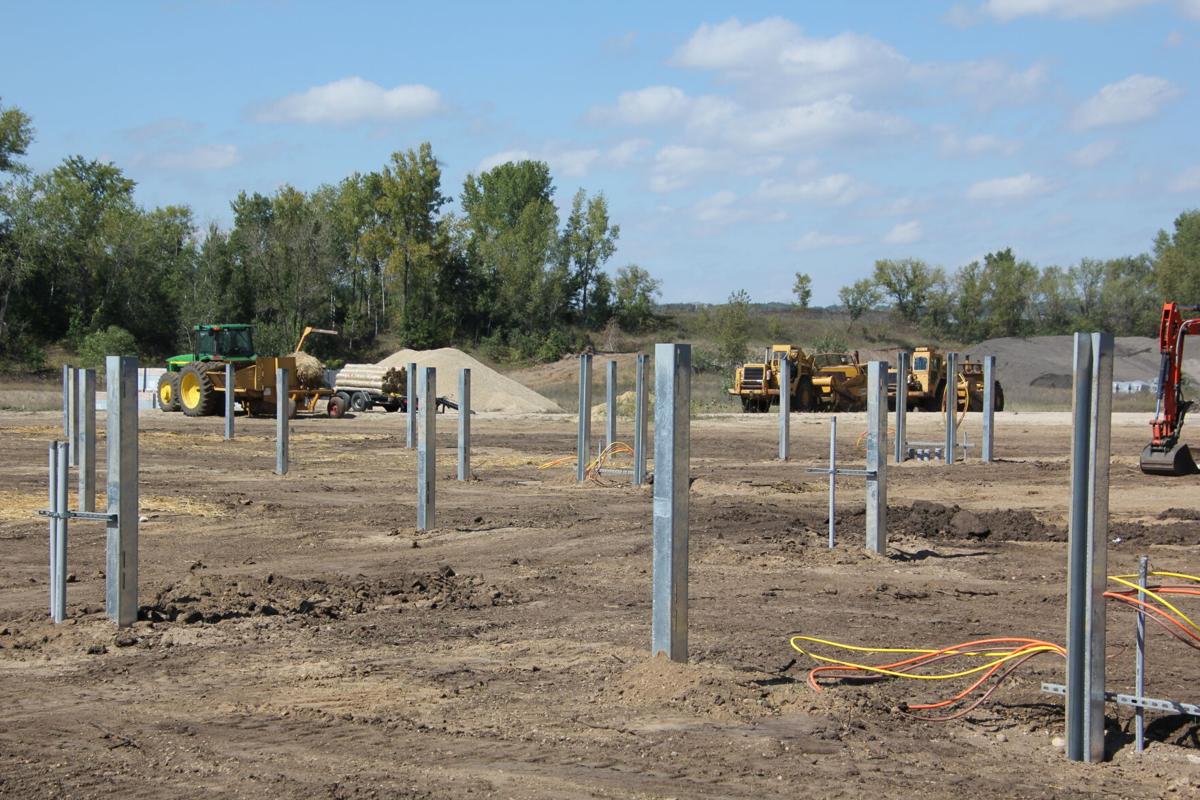 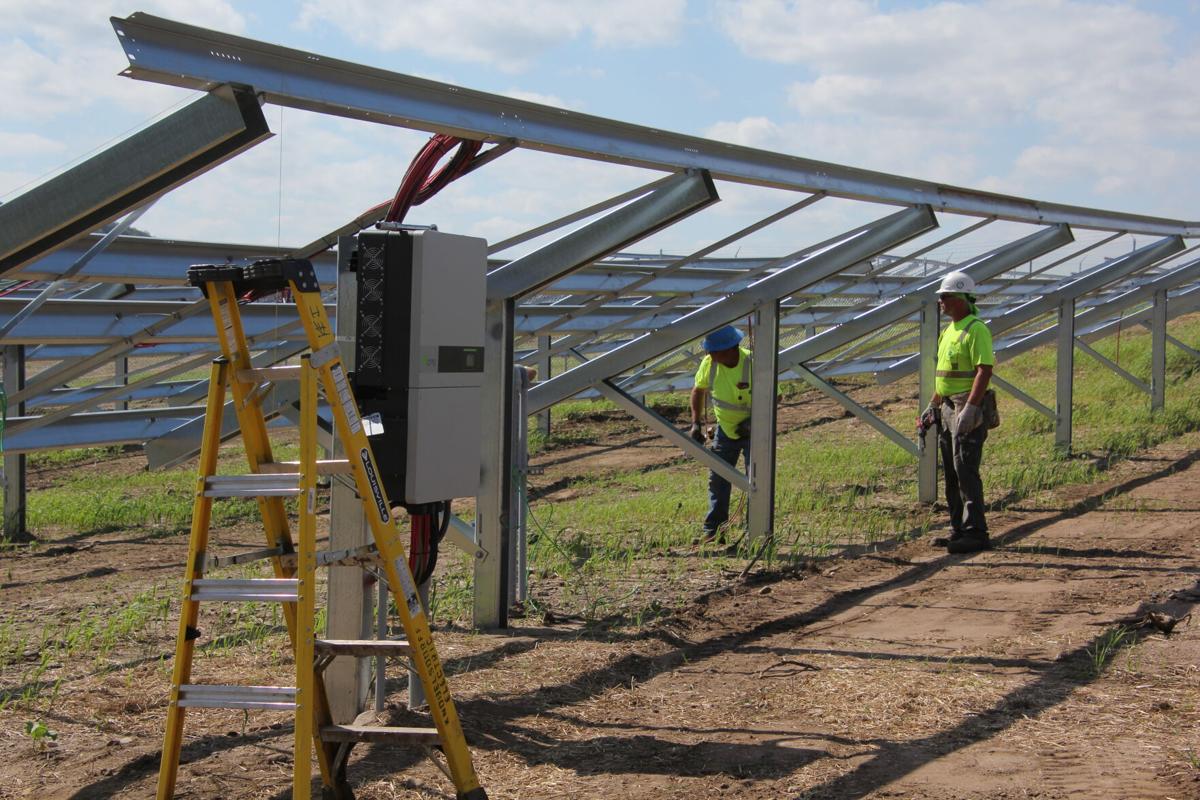 An old sandpit near the Sportsman's Club in Frontenac off Highway 61 has been transformed into the Frontenac Solar Garden, reflecting a trend of rapidly increasing use of solar power throughout Minnesota.

"This site was an old quarry," said Karl von Knobelsdorff, owner of Knobelsdorff Electric, Inc. from Goodhue. "It is a good use of the land. You don't like to see a solar garden go onto nice farm land."

According to von Knobelsdorff, whose company is constructing the Frontenac Solar Garden, most solar gardens in Minnesota are being built on poor farmland with a history of low production, and "now they are collecting lease money for a solar garden for 25 years."

"It's a real win for the farmer, the environment, and the community," he said. "It puts a lot of local people to work, and it's a good tax base for the county and the state."

Statewide, the construction of solar gardens is soaring, according to David Shaffer, executive director of the Minnesota Solar Energy Industries Association in St. Paul, which represents 120 solar companies in the state.

Shaffer said the best way to talk about solar energy is in megawatts. In 2009, the state of Minnesota had a total of 1.5 megawatts of solar energy. The solar panels for that amount would have covered about 12 acres.

"We have gone from 1.5 megawatts to installing 5 megawatt gardens all around," Shaffer said.

"We just reached 400 megawatts of installed community solar gardens with another 300 megawatts to go," Shaffer said. "I would guess that about 100 more megawatts will be built this year, and then another 200 will be built in 2019, based on what is currently in the cue."

He said he would not be surprised if Minnesota soon had a gigawatt of solar power installed. "That is 1,000 megawatts," he said. "Many other states are not even at 100 megawatts."

The Solar Energy Industries Association has a map that gives a detailed comparison of state-by-state solar installments at their website at https://www.seia.org/states-map.

Much of that growth is the result of legislation passed in 2013 which led to the creation of community solar gardens. A key factor is that legislation did not put a cap on how much community solar can be installed, but left those decisions to the market.

A solar garden is built with private money, von Knobelsdorff explained. The investors sell the electricity to a utility to recover their investment. Subscribers sign contracts with the solar garden to use the power and receive a discount in return.

"You sign a 25-year contract to buy power from this site, and it costs you a penny less per watt," von Knobelsdorff said. "The Red Wing School District did it, and I think it will save them $8 million over 25 years. It costs them zero dollars, so there is no investment to people buying into the program."

The catch is the 25-year contract. Companies, residents or other entities need to be sure they will be around and in the same location for that time span, he said.

Recent rainy weather and cloudy days may have some questioning the viability of solar power in Minnesota.

"This is not really a problem for anybody," Shaffer said. "If there was a long period of prolonged cover, maybe like a forest fire in Canada that had smoke over Minnesota for a long time, that would reduce the output of the system, so you might see slightly lower returns than you expected."

The systems are based on 25-year contracts, so unless we "see a stark change in the climactic landscape, you can pretty easily model out your expected returns on this, and because it is such a long period of time, a few days of rain won't matter too much," Shaffer said.

"Minnesota, overall, is a great solar energy production state," von Knobelsdorff said. "When it is cold, the panels put out more power. On a cold, sunny day, we will overgenerate."

While it is hard to compete with California, Arizona, Nevada, or Texas. which are sunny almost every day, Minnesota "is a very good state for solar. Out of the 50 states, we hit the list pretty good," von Knobelsdorff said.

Each solar garden takes Knobelsdorff Electric about 12 weeks to build. They started the Frontenac Solar Garden the first week of July, and even with three weeks of rain, they finished in October.

Because the site was a deep ravine, "We had 32,000 yards of dirt work that we did on the site to flatten it out to fill in where the old sandpit used to be," von Knobelsdorff said. "We had to build a road for the neighbor to get back to his property. The road used to cut through the middle of the pit, so we we had to relocate it."

With the site graded, work crews then set steel piles into the ground.

"There are 2200 of these 22-foot long C channels," von Knobelsdorff said. "They get pounded down about 15 to 16 feet. We've got machines that pound those into the ground. Each pile has a GPS location."

Each pile can take from two to 10 minutes to drive into the ground, depending on what type of soil or rock is beneath the surface.

The depths of the piles can vary from one site to another, according to von Knobelsdorff. "We take the geotechnical reports and that tells us what we need for embedment depths, for wind uplift, for windsheer, so different manufacturers, as well as different owners of the sites, have different requirements of what they want those values to be."

Crews then build racks to hold the solar panels on top of the piles, wires are placed, and grass is seeded to prevent erosion. After the glass panels are installed, the wiring is finished, and the solar system is ready for use.

"This is called a fixed-tilt system," von Knobelsdorff explained. "It is fixed in position at 25 degrees facing south."

He said they also build systems that track the sun from east to west throughout the day, but because they have more moving parts, "They cost more to install, and they cost more to maintain."

With the equipment in place, crew members will plant a seed mix of wildflowers and native grasses, "which is good for the bees and the butterflies, so it is an environmentally friendly," von Knobelsdorff said.

When Knobelsdorff Electric finishes the installation at Frontenac Solar Garden, the owner will be Clearway Energy Group, the renewables division of NRG Energy. They will operate and maintain the site and sell power to Xcel Energy, according to von Knobelsdorff.

Shaffer said two factors will possibly make solar energy in Minnesota even bigger. First, wind energy has a tax credit now that is expected to run out in the early 2020s. When that expires, solar energy will be more competitive, he said.

Second, many companies are working on improving methods of energy storage. "Once energy storage becomes cost effective, there's really no need to have much of any fossil fuel," Shaffer said.

Projects like the Frontenac Solar Garden and the more than 1,000 residential solar projects this year add to the growing number of jobs in the Minnesota solar industry, according to Shaffer.

"We have seen huge jumps in employment numbers," Shaffer said. "Right now, one of the fastest growing jobs is solar installer. We have about 4,000 people employed in solar in Minnesota. Solar is a multi-billion dollar industry here."