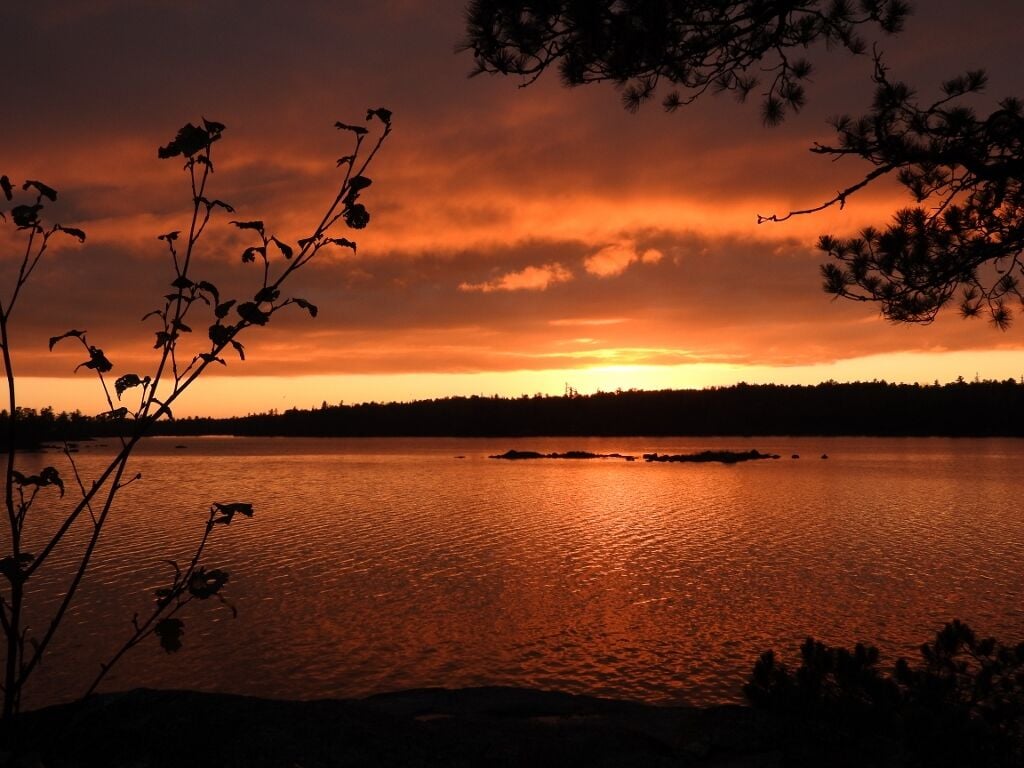 Thick, gray clouds still hung low over the glassy lake, but in the west, a sliver of clear sky had begun to show above the dark trees. 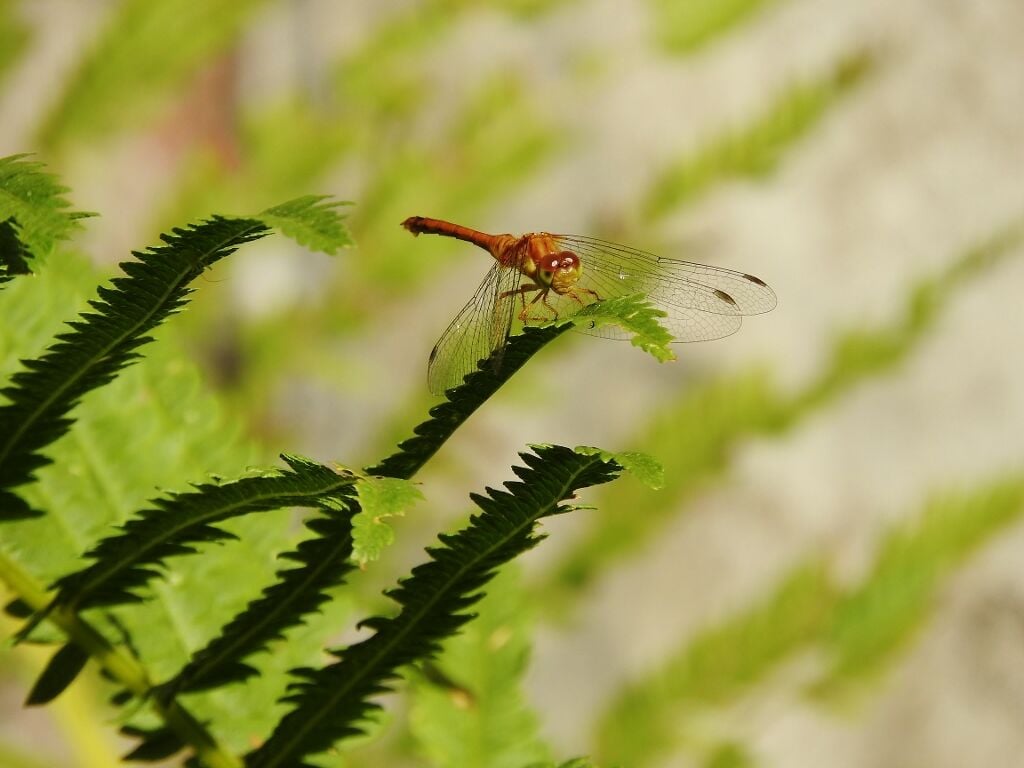 Autumn meadowhawk dragonflies are the last to remain flying through the fall. I photographed this one in my garden last year. She was much more cooperative than the ones I recently observed in a mating frenzy! 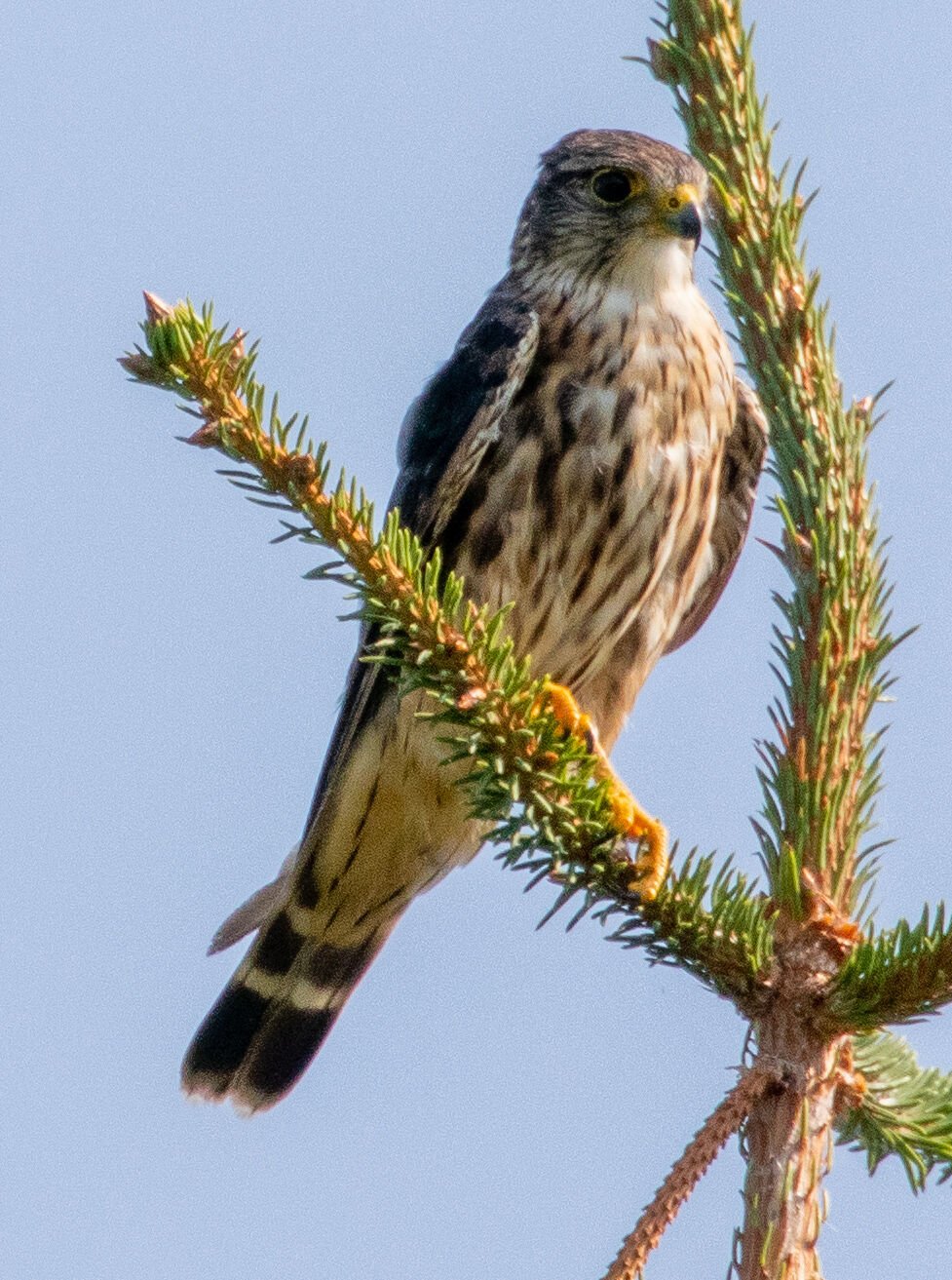 Merlins are small falcons who specialize in hunting songbirds on the wing.

Thick, gray clouds still hung low over the glassy lake, but in the west, a sliver of clear sky had begun to show above the dark trees. All day, the air had been so damp that rain gear was needed, even though drops never coalesced enough to fall. It had felt like a typical day in the Boundary Waters Canoe Area Wilderness as we paddled and portaged into a pink granite campsite on the Kawishiwi River.

With the pots washed and firewood gathered, we picked up books and journals to relax. I was immediately distracted by a flock of active locals twittering between a tall white pine and a thicket of baby birch. Chickadees scolded and gurgled at each other in the hierarchy of a relatively new winter flock. Even-smaller birds with drab feathers and faint white wingbars kept up a constant chatter of tsee-tsee-tsee. It’s a wonder that these golden-crowned kinglets can survive Northwoods winters. They do it by feeding frantically on cryptic caterpillars all day, then diving into cover with their friends at dark and sharing body heat all night.

Then, out over the lake and behind a pine, a different flock—maybe juncos?—darted from left to right in fish-school formation. One bird was slightly bigger than the rest, with sharp wings and a dark body. “Merlin!” I gasped, as the flock escaped and the falcon swooped up to perch at the top of a birch tree nearby. I grabbed for my camera, but when I looked up, he was gone.

I was surprised to see this little raptor still migrating. I would have guessed that they head south in early fall like their smaller cousins, American Kestrels. But when I checked the raptor count data from Hawk Ridge in Duluth, I found that merlins migrate later, with the highest ever number of individuals recorded on Oct. 9, 1997. In contrast, kestrels’ record high was Sept. 9.

Otherwise, the behavior we witnessed was exactly what I’d expect. Those pointed wings are built for the speed and maneuverability that merlins need for hunting songbirds on the wing. A species of prairies as well as boreal lakes and forests, merlins have done the opposite of cardinals and have used city habitats to begin breeding farther south. This range expansion has likely helped to fuel their recovery from declines caused by DDT contamination in the 1960s.

Before I could settle back into my book, the sun emerged below the edge of the weather front. For ten minutes, the campsite glowed, the trees lit up and the water sparkled in the only sunshine of the day. Then the trees swallowed it up and the world turned orange. The colors from those last moments of sunset seemed to pour themselves into our fire grate, and we roasted s’mores while the stars came out.

Thick morning fog gave the world an eerie look, but it burned off around lunchtime. As we prepared to pull away from shore after a portage, the darting flights of dragonflies caught my eye. Dragonflies? In October?

Each of the male autumn meadowhawk dragonflies was using an appendage at the tip of his abdomen to grasp a brown female meadowhawk by the back of her head. This tandem position indicates that they’ve already mated and now he’s guarding her to make sure that no other male horns in. As I watched, the pairs dipped low enough to touch her abdomen to the water. Then, to my horror, they rose up and seemed to whack her abdomen against rocks emerging from the water.

Over and over the pairs dipped, whacked and repeated this behavior, with half a dozen couples visible in my camera’s viewfinder. I’ve read that dragonfly females are often injured during the mating process, but this seemed extreme. When I posted my video and question in the Wisconsin Dragonfly Society’s Facebook group, member Jim Johnson explained that the female dragonfly picks up a drop of water, extrudes eggs into it and then shakes the eggs loose by slamming into a rock.

Other resources mentioned alternating between water and mud, and also that eggs are often laid in shallow water, deep water and on land. All of these options have tradeoffs, but the main goal is to reduce the number of eggs that fish eat and to make sure some of the eggs survive the winter, no matter which habitat faces the most challenges in that particular year.

Over and over, I read that autumn meadowhawks are aptly named for having the latest flight period of any Northwoods dragonfly. If we continue without hard frosts, they could be seen into November.

The forecast continues to be unseasonably warm and perfect for canoeing. While this triggers a bit of worry about our changing climate, I’m grateful to have squeezed in this late-season trip and to have witnessed some of the last flights of fall.