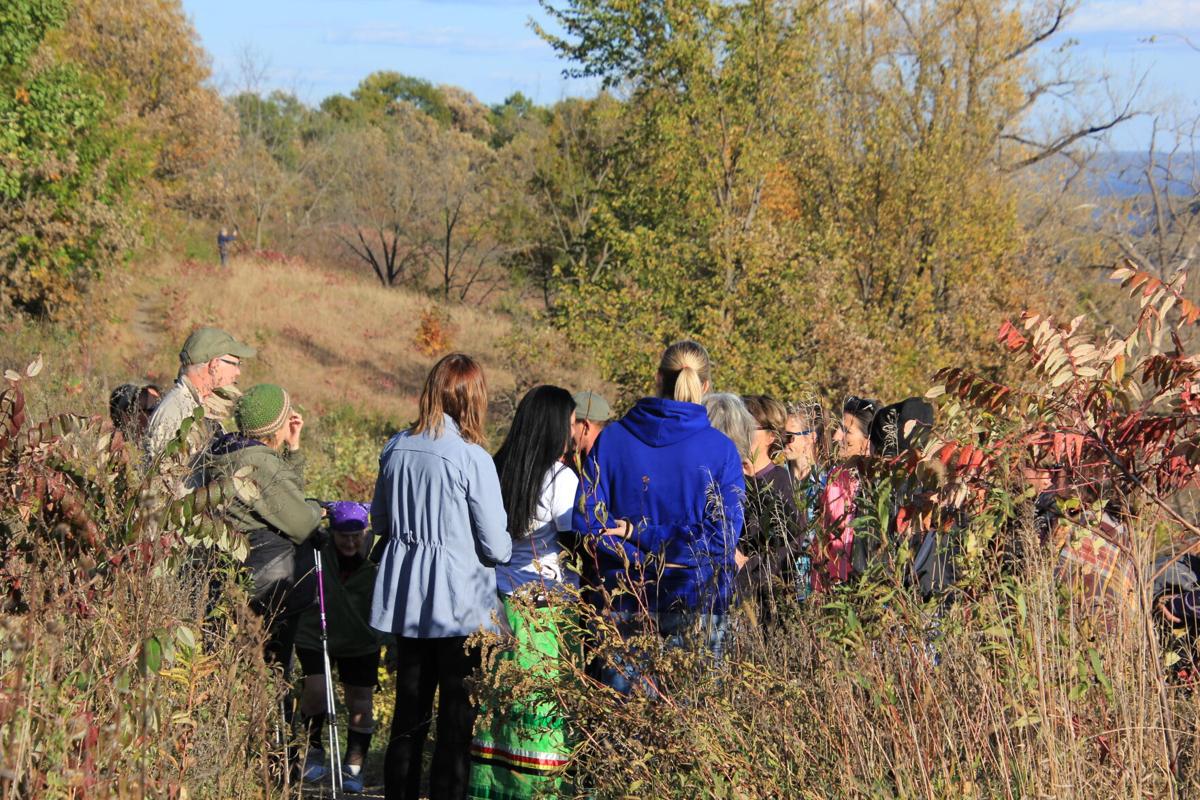 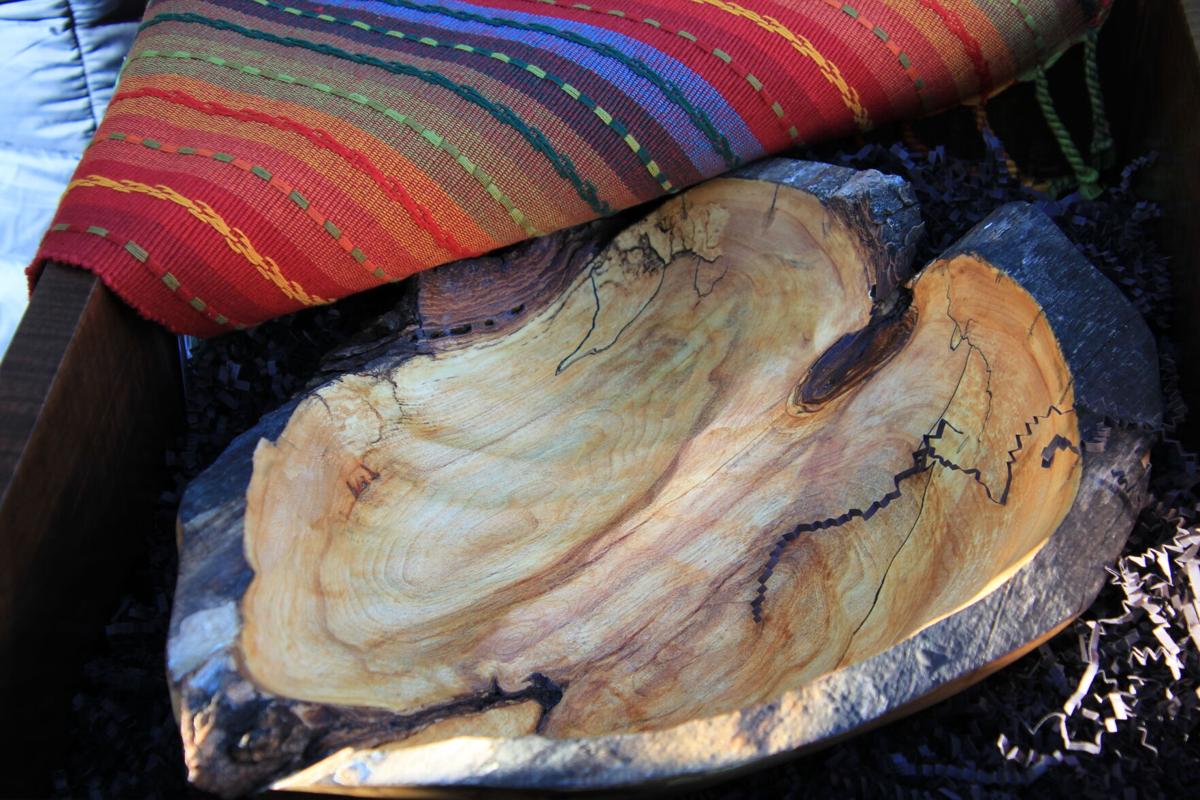 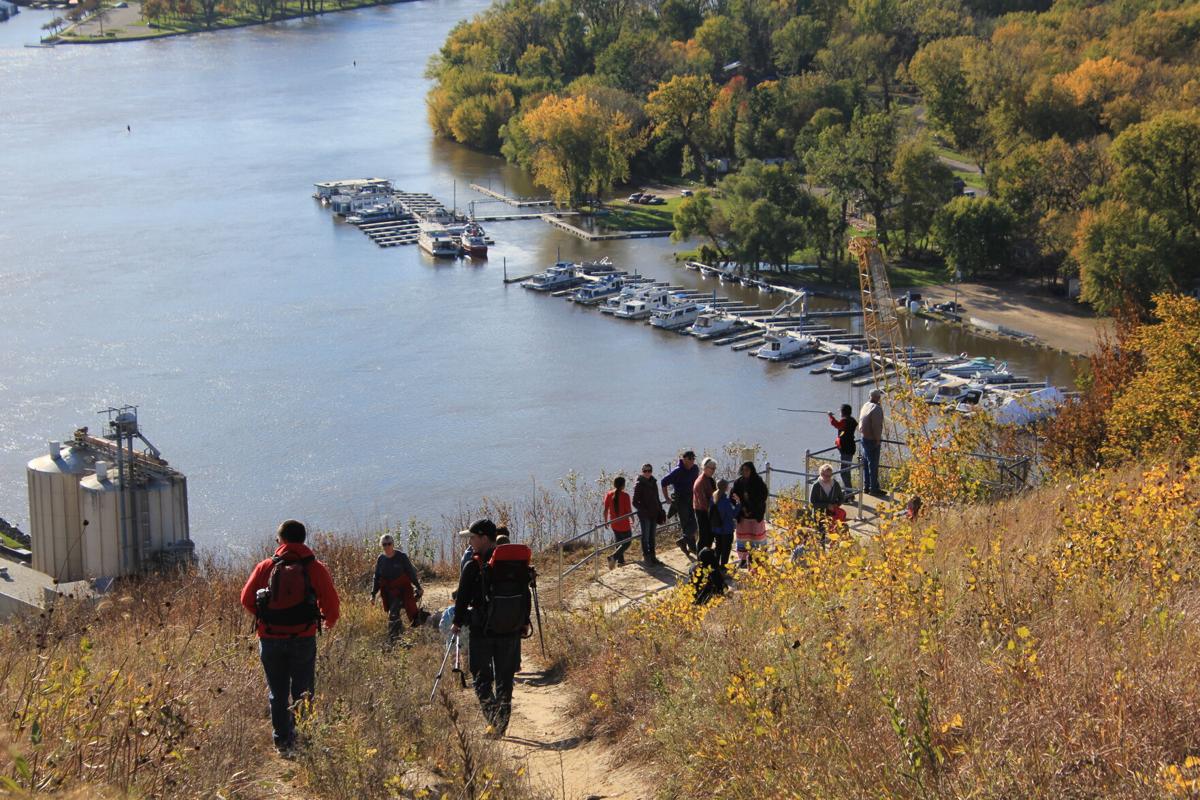 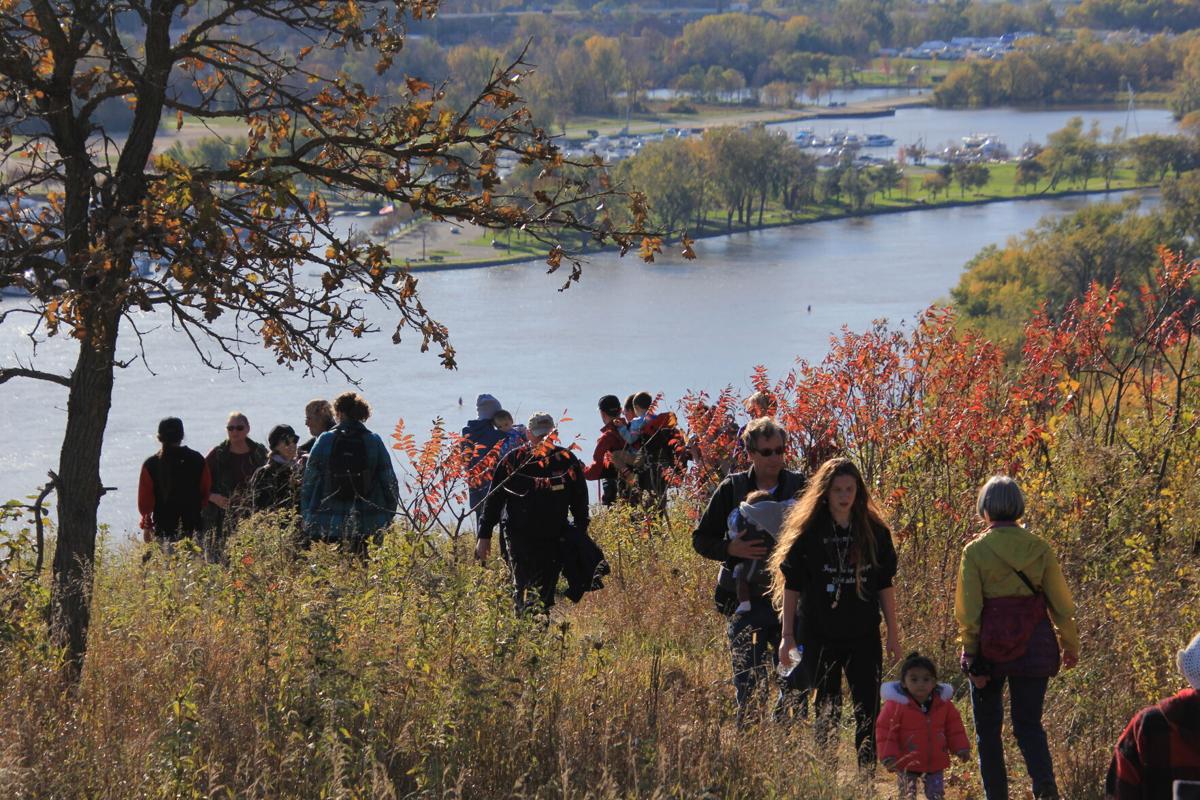 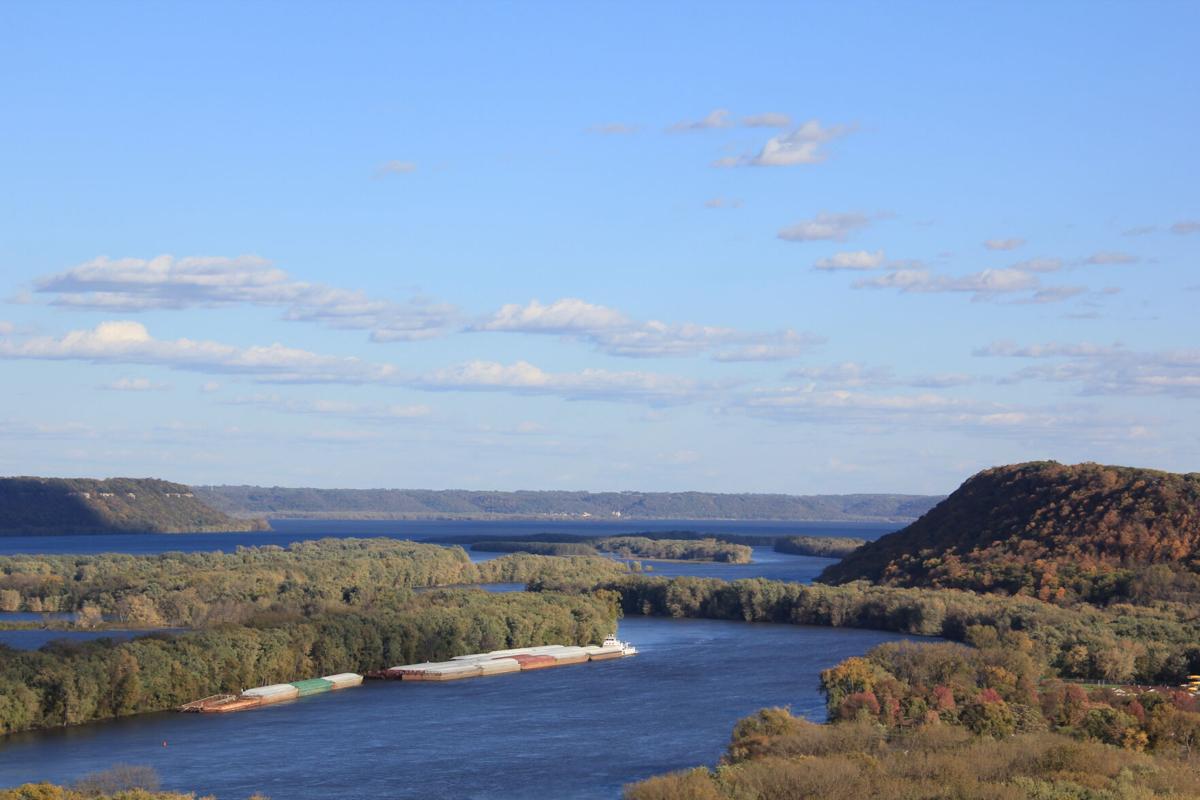 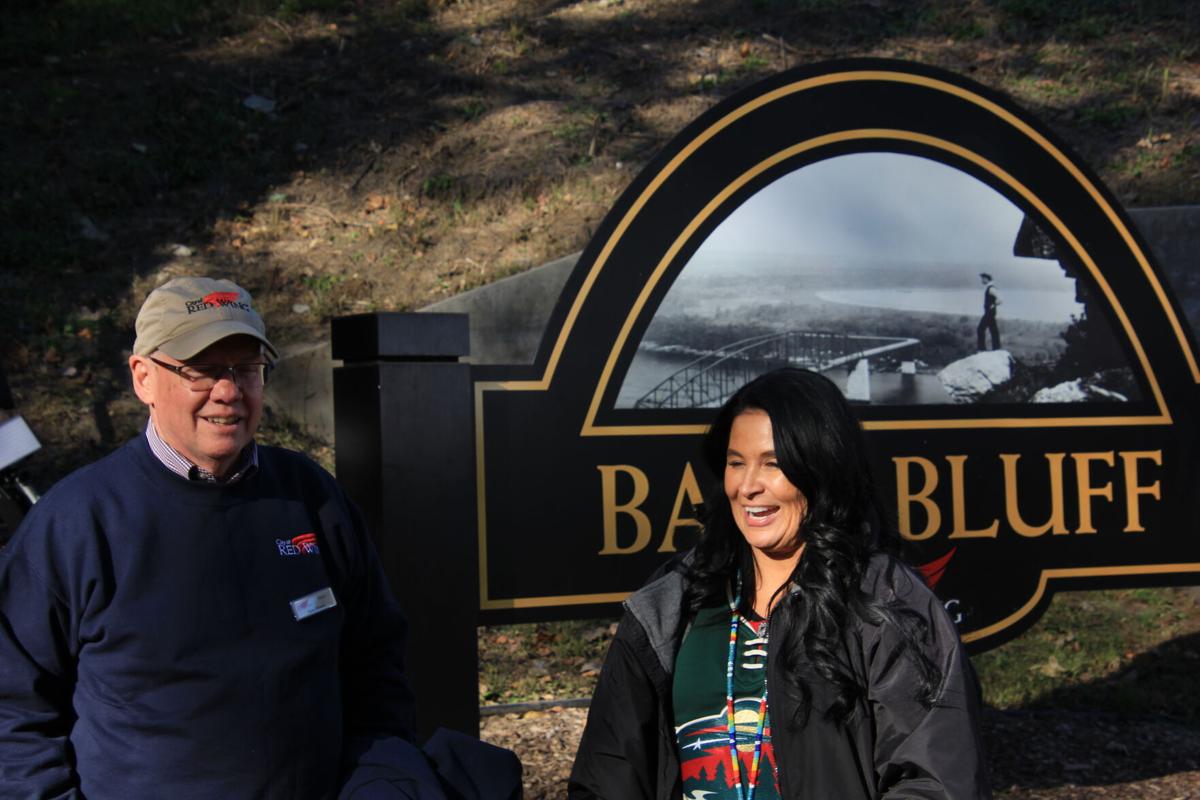 There are now two bridges at Barn Bluff.

The first, under construction for months, will join the two banks of the Mississippi River.

The second, in need of work for decades, built long spans in one afternoon, closing the distance between two communities, two cultures, two ways of thinking and living.

During a ceremony at the base of Barn Bluff on Tuesday, Oct. 16, officials from the City of Red Wing and the Prairie Island Indian Community, along with many members of both communities, came together to celebrate the recent decision to prohibit graffiti on Barn Bluff and respect its historic significance to everyone who lives in the area.

After many days of rain, Tuesday afternoon featured clear skies, warm temperatures and a good turnout for the ceremony.

"It means a lot to us to have so many people come out here and support this," said Shelley Buck, president of the Prairie Island Tribal Council. "Some of our ancestors are buried and laid to rest up there. For us, it is our creation story. It is a cultural identity for us. For us, it is more than just the rock. It is our tradition with the rock. It dates back centuries."

Red Wing Mayor Sean Dowse acknowledged the symbolism of the meeting at Barn Bluff by presenting Buck and the Prairie Island Indian Community a wooden bowl.

"You can turn the vessel over and the shape represents the hill, He Mni Can itself," Dowse said. "Inside the vessel, the ripples represent the water, and the contours of the vessel represent the wood. You hold it up, and it represents two halves, two communities joined together with a single heart signifying respect and peace."

Buck said that the two communities coming together for a ceremony had not happened before.

"There has always been tension between the two communities," she said. "The fact that we are able to come together on something that is so important to us is amazing."

Buck praised the leadership of Red Wing for having "the courage to step up and do the right thing," she said. "It is awesome that we are able to do this hike together. It is starting to build that bridge, the relationship, and together, we can do so much more than we can apart."

Dowse called the ceremony "a great moment." He said he looks forward to the two communities working together on projects in the future and learning from each other.

One future project that needs attention is removing spent nuclear fuel from Prairie Island, according to Dowse.

"We have a century-and-a-half of rolling over native peoples," Dowse said. "That time is over. We're here together. We're on this land together."

The process of making "what I believe is the correct decision was an enlightening process for the City of Red Wing," Dowse said. "We had three board commissions look at the issue over a year. There were many public meetings, many hours of listening, and they all came up with the same conclusion, which is to respect the land, to respect the territory, and move forward with a relationship with the Prairie Island Indian Community."

Art Owen, the spiritual leader of the Prairie Island Indian Community, said the Dakota name for Barn Bluff is He Mne Can (pronounced Heh-Meh-NEE-Cha).

"The He is guttural," he said, "and means the hill. Mne is the water, the Mississippi River, and Can is the wood. With those, you have everything you need to survive. It is right here."

Owen said Prairie Island members had gone to Montana, north of Yellowstone National Park, and brought back 22 buffalo to share with the tribe. In a private ceremony the day before, one buffalo heart was buried on Barn Bluff/He Mne Can, a symbol of generosity for all people, he said.

"The gift of generosity comes from Treasure Island," Owen said. "When we built that, we had everybody in mind. It wasn't just the Dakota people."

The plan for building Treasure Island was to be "a positive contributor to the valley," Owen said. He added that in addition to employment,Treasure Island offered health and dental insurance, as well as auto and home loans.

"We brought the employment up in Goodhue County," Owen said, "but we also affected Pierce County. The vision was to create abundance for people. That's why we had that heart put up there, for abundance."

The ceremony and hike made her feel a sense of hope for the two communities.

"We are all in this," she said. "We all want our community to be a good community. We all want to succeed. This is the first step in what will hopefully be a long-time relationship."