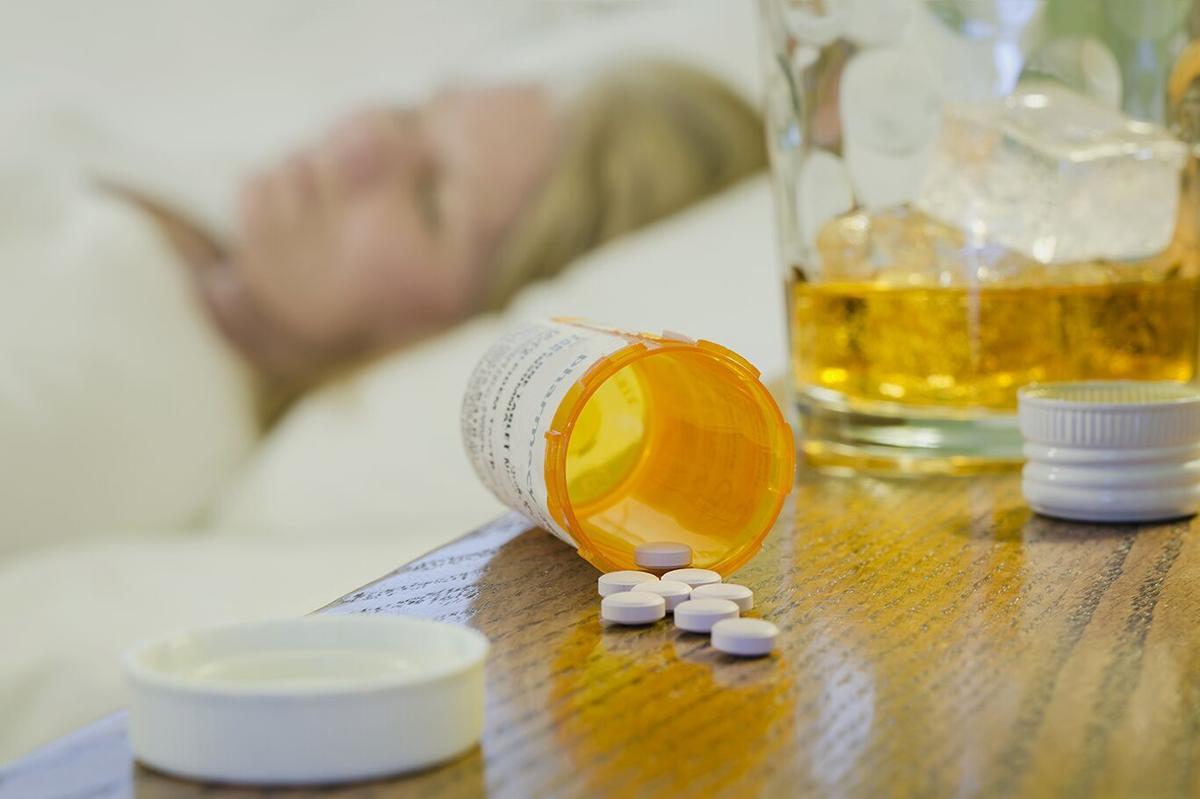 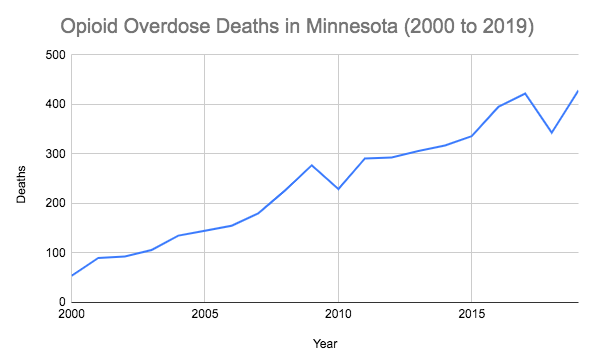 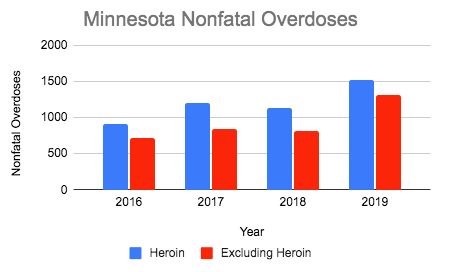 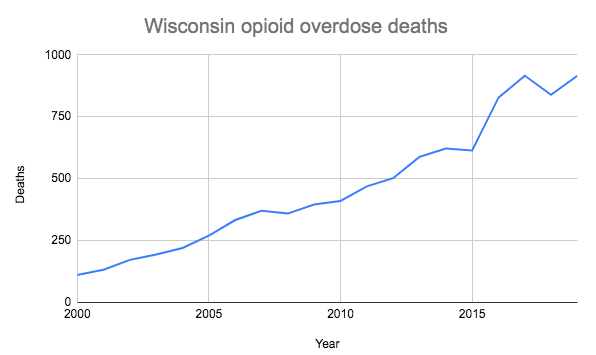 The conversation about opioids was much quieter in 2020 than previous years. This is not because opioid addictions fell, but because COVID-19 exploded onto the global stage. This tragically resulted in a jump in opioid overdoses across the nation.

The CDC reported last week that more than 87,000 people died of a drug overdose between September 2019 and September 2020. In Minnesota, overdoses jumped by 32% in that timeframe, which is a higher rate than the national average.

He noted that some of the overdose calls may not have been due to opioids.

Even before the pandemic opioid overdoses were increasing throughout Minnesota. In 2000, 54 people in the state died from an opioid overdose. In 2019, 428 individuals died due to an overdose.

Data is still being collected, but organizations like the National Institute of Environmental Health Science have begun looking at the cause and effect patterns. NIEHS suggests that there are four major elements of recovering from an opioid addiction that for many, may be disturbed by the pandemic:

The National Institute on Drug Abuse collects data on opioid use and overdoses to better understand what is happening nationally and how to reduce overdoses. The organization reported:

Rohr stressed that it is important to know about opioids and overdoses.

“Opioids are commonly prescribed medications normally used to manage pain, so people believe they are safe,” he said. “At low doses, they can have a calming effect and may make people feel relaxed. But at higher doses, opioids can slow your breathing and heart rate to the point where the brain doesn’t receive enough oxygen. This can lead to brain damage, coma and even death.”

In February the Red Wing fire and police departments shared information about symptoms of opioid overdoses with the community. The publication instructs:

Call 911 immediately if someone doesn't wake up, move or respond. After calling for help, open

the person's eyes and look at their pupils. Indications of an overdose are small pinpoint pupils that remain unresponsive to light. During an overdose, the body isn't taking in enough oxygen, which leads to grey or blue lips. Breathing may be slow or non-existent, and there could be gurgling or snoring sounds, choking or even throwing up. The body is limp, the skin cold and clammy and the person will likely not wake up.

Responding quickly and appropriately to someone in this state is crucial. Call 911 and stay with them until help arrives. If they do not have a pulse, start CPR by pushing hard and fast in the center of their chest. If they have a pulse but are not breathing, try to get air into their lungs with rescue breathing.

Rohr and Warner add that individuals who are at risk of an overdose, family members and people who live in at-risk communities should consider carrying naloxone, which is commonly sold under the brand name “Narcan.” Naloxone is an opioid antagonist; it reverses an opioid overdose. Naloxone can and has saved lives, but it is not the solution to the opioid crisis.

Dr. Scott Weiner explains, “Naloxone should be considered a Band-Aid, but it is not the solution to the opioid crisis. Naloxone is only sufficient to save the life of a person who is actively overdosing. This antidote does nothing to prevent future overdoses, nor does it address the longer-term treatment needs of patients with substance use disorders. I don’t mean to downplay the importance of naloxone to save the life of an overdose victim but saving a person from an acute overdose is merely the first step.”

Harm reduction has also been recognized as a public health model since the 1980s. The CDC explains that this model includes providing a spectrum of strategies from safer use, to managed use to abstinence; addressing use conditions; approaching a conversation about opioids with a non-judgmental and non-coercive provision of services and resources; and including the voice and insight of people that use or have used drugs in the creation of programs and policies.

A few states have worked to prevent opioid addictions with prescription drug monitoring programs and restrictions on who can prescribe opioids. The CDC reported that in 2010 Florida “regulated pain clinics and stopped health care providers from dispensing prescription opioid pain relievers from their offices, in combination with establishing a prescription drug monitoring program.” Two years later, Florida saw more than a 50% decrease in oxycodone overdose deaths.

In 2019, Gov. Tim Walz signed the Opiate Epidemic Response bill into law. The Minnesota Department of Human Services website explains that the law is expected to raise $20 million annually “through fees and for prescribers, drug manufacturers and distributors.” The bill also established the Opioid Epidemic Response Advisory Council “to develop and implement a comprehensive and effective statewide effort to address the opioid addiction and overdose epidemic in Minnesota.”