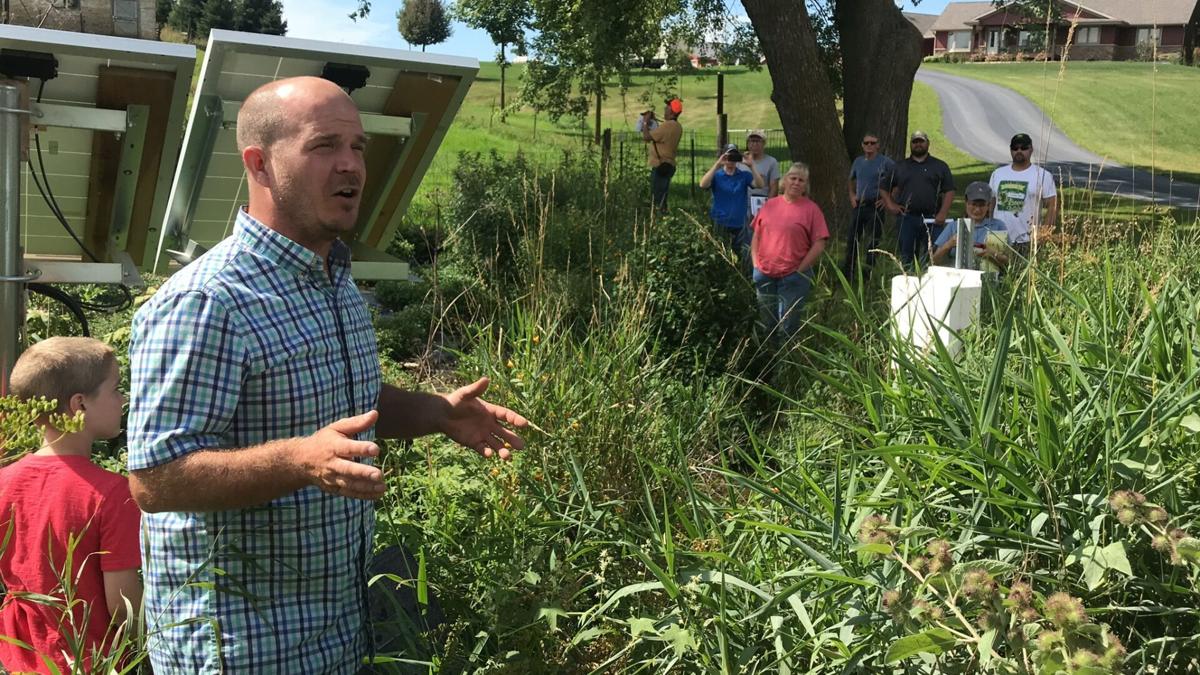 Martin Larsen, feedlot technician with the Olmsted County Soil and Water Conservation District, stands in front of solar panels near a spring in Olmsted County. He is explaining how a watershed contributes to water quality using data collected in the station in the white box on the right side of the photo. Photo courtesy of Martin Larsen 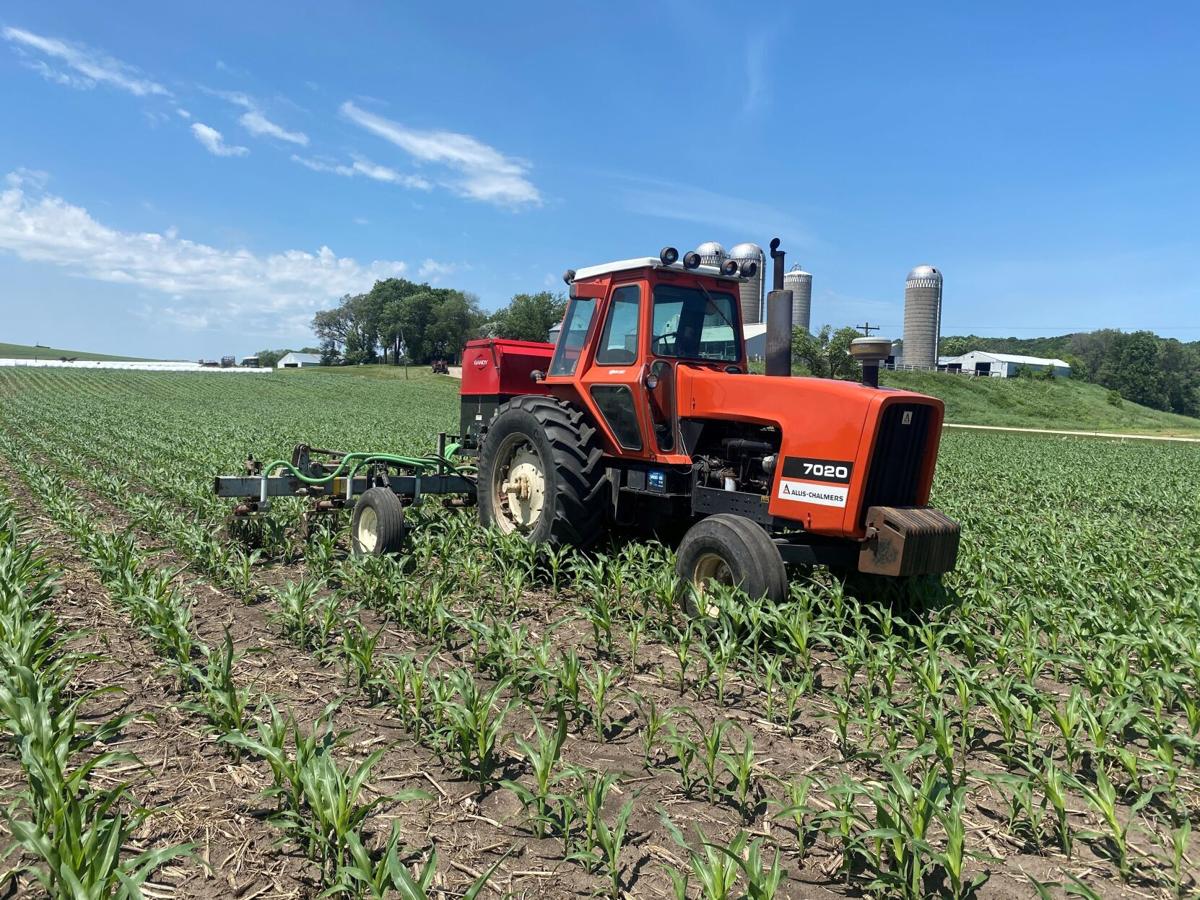 Using an interseeder he built himself, Martin Larsen plants rye and clover between rows of corn to provide a cover crop to protect the soil. Photo courtesy of Martin Larsen 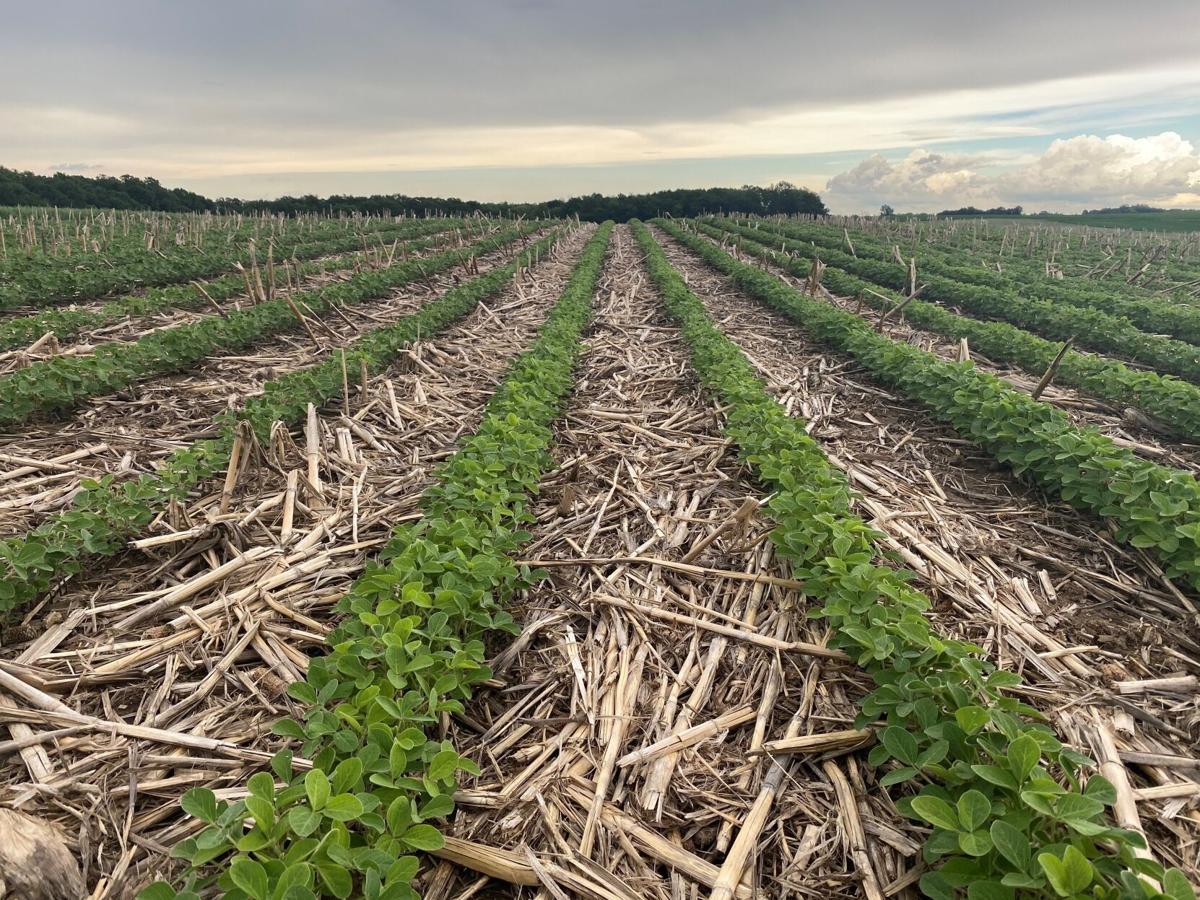 Cornstalks from 2019 cover the ground between rows of soybeans for Martin Larsen’s 2020 crop. Larsen calls the cornstalks “armor” to protect the soil from heavy rains and compaction from farm equipment. The cornstalks also absorb water and hold it in place. Photo by Martin Larsen 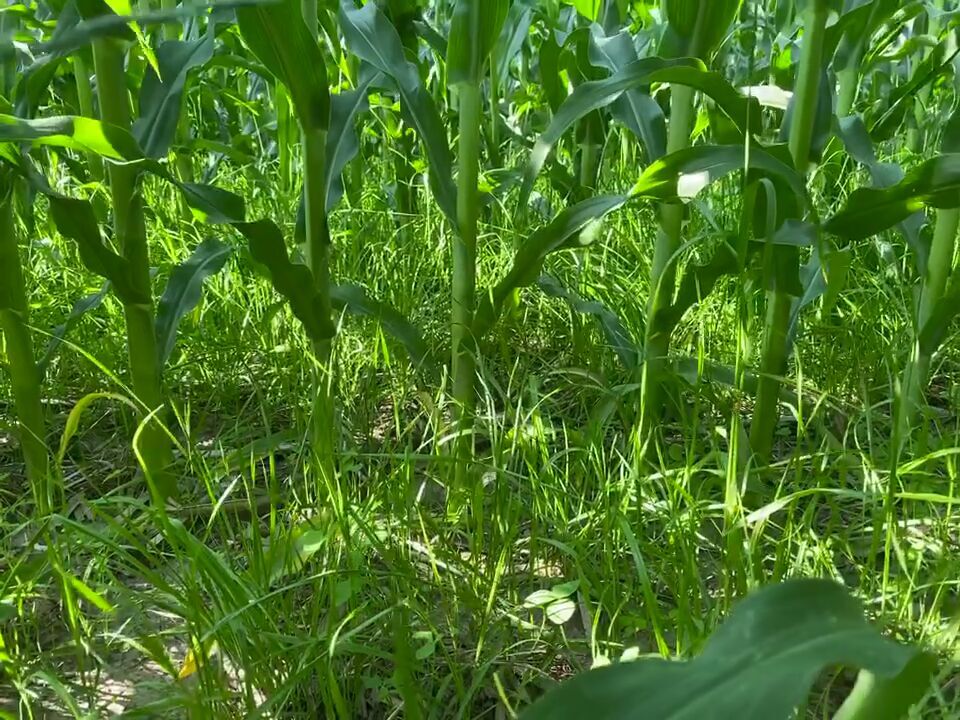 An early season view of interseeding with clover and rye growing between rows of corn. Martin Larsen said the crops do not compete with each other, and that “there is evidence showing that there’s some synergistic qualities between the crops growing together.” Photo by Martin Larsen 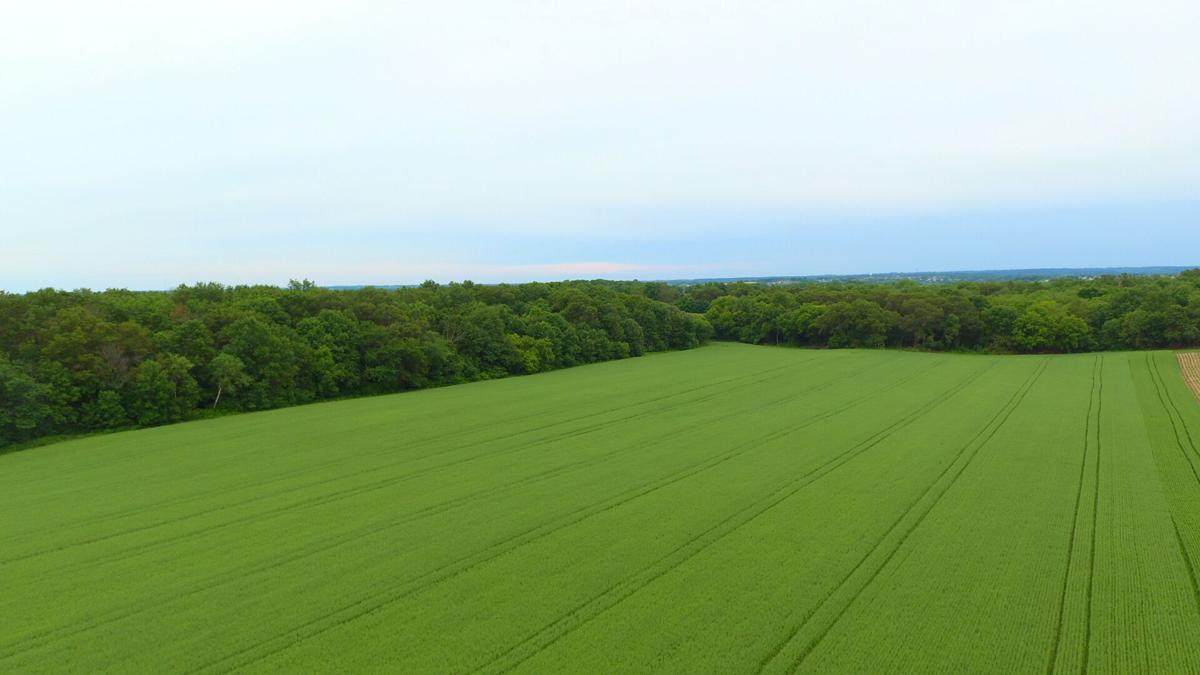 Crop diversity is important to famer Martin Larsen, and this drone photo shows a field of oats next to a wooded area on his farm near Byron, Minn. Photo courtesy of Martin Larsen

In spite of the increasing presence of larger farms practicing what has become known as industrial agriculture, a number of small farmers still exist and some have started using sustainable or regenerative farming methods.

Although the two terms are often used interchangeably, Martin Larsen, who owns a farm near Byron, Minn., and works as a soil conservation technician with the Olmsted County Soil & Water Conservation District, said there is a small but significant difference in the terms.

“Sustainable farming would be working to maintain the level of soil health that you are at,” he said. “Regenerative farming would be taking soil that has been degraded in some way and building it back up to a better or healthier state.”

Things that might have degraded soil would be repeatedly plowing a field, growing the same crop year after year, or using too much chemical fertilizer on the field. All of those deplete the natural quality of the soil, according to Larsen.

When he started regenerative farming, one of the first things Larsen did was to add cover crops to his land year round rather than leaving the field bare after harvesting.

“It’s not like you just wave your hand and it happens,” Larsen said. “It’s a management issue. You manage it like you manage your cash crops.”

He wanted to add a cover crop to his cornfield, but didn’t have a tool that would allow him to do that, so he custom built an interseeder so he could plant a cover crop between the rows of corn.

“When the corn is really young, just 6 to 8 inches tall, I go out there and seed my cover crop,” Larsen said. “It comes up just a little bit and exists down underneath the corn. When the corn starts to die down, starts to brown out, the sunlight hits down into that lower canopy, and I get good growth on the cover crop.”

Cover crops also help with weed management. Larsen said many types of weeds are growing resistant to herbicides such as Roundup.

“One weed that’s a particular problem is waterhemp, a small-seeded broadleaf,” Larsen said. “When you keep the ground covered, waterhemp doesn’t like that. It doesn’t like the competition. If you have cover crops out there, it’s another mode of action.”

Open soil is also an invitation to erosion, and cover crops help reduce that. Larsen, in his work for the soil and water district, sees the damage done by soil erosion, not only on the farms but in places like road ditches where it can cost counties and townships thousands of dollars to clean out ditches.

“It can be expensive to have those men and all that equipment out there,” Larsen said. “So you have community costs and social costs for soil loss, which pretty much end when you introduce cover crops.”

Kaleb Anderson is a third-generation farmer on land near White Rock in Goodhue County, Minn., and he noted that in conjunction with planting cover crops, the best way to start promoting soil health is to “limit disturbance, whether that is chemical or mechanical.”

He said there are three types of tillage most commonly used on area farms. The first is the traditional version where the entire field is uniformly disturbed via plow or field cultivator, resulting in a completely bare field.

The second is a series of strips in which one strip is tilled and the next is not. Strips can be four to eight inches wide and require more precision during planting in order to plant down the tilled strips.

The third type is Anderson’s preference and is called no-till. He uses a planter with thin discs which makes “a micro-disturbance in the tiniest amount of area. If you’re planting the seeds two inches down, you’re cutting the soil to that depth, inserting the seeds and then you’re coming in with the closing

wheel right behind it.”

Anderson said that because of climate change, farmers are experiencing more heavy rain events, but the increasing number of record flooding events is also due to water infiltration problems from degraded soils with poor soil structure across a majority of agricultural lands.  If their soil has been plowed, for example, the chance of soil erosion and fertilizer runoff is higher than on soil developed using regenerative methods.

“Healthy soil should be able to absorb inches of rainfall per hour, so you shouldn’t have overland flow of water,” he said. “Healthy soil should have aggregate structure. It’s got air pockets and voids and organic matter and roots. It’s like a sponge.”

Switching to no-till and planting cover crops like cereal or winter rye are two changes that Anderson encourages farmers to use to improve the health of their soil and reduce soil erosion and runoff.

Part 7 will look at crop diversity and rotational grazing as elements of regenerative agriculture.